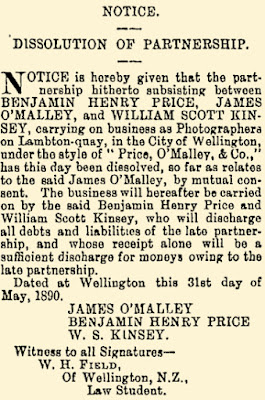 
The partnership was dissolved on 24 April 1891 and the business was carried on under the name of Price & Co. by William Kinsey. However by 19 September 1892 Kinsey was advertising the studio under his own name [1]. 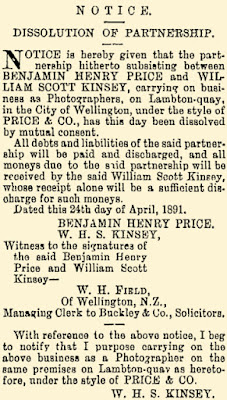 
MODERN PHOTOGRAPHY.
Photography in the present age indeed seems to have reached perfection in the art of life-like and beautiful reproduction of figure and face, and a glance through the showroom of a popular photographer of acknowledged ability is perhaps now of more interest than ever. The experience certainly imbues the visitor with a strong desire to have his own likeness taken, so moderate are the current charges and so wonderful the results.

Our Wellington representative has recently paid a visit to the well-known studio of Messrs Price & Co., on Lambton Quay, Wellington, at the invitation of Mr W. Kinsey, the principal of the firm, and to have explained in a lucid manner with illustrations, the many and delicate processes a photograph has to pass through before it attains its ultimate climax of beauty and finish is highly interesting.

Messrs Price and Co. have very extensive premises and employ a staff of about fifteen persons altogether. Mr Kinsey himself has charge of the operating room which is a large and well-adapted apartment, containing everything new in the way of scenery (specially imported from Europe), and well-equipped with cameras of every size and shape, ranging from the ordinary instantaneous portrait lense instrument, up to what Mr Kinsey calls his "Big Ben," a huge camera of awesome proportions, and which latter is used mainly for taking groups and large sized likenesses of "heads." Larger still, again, is the apparatus for producing what are called Bromide Enlargements, a mammoth picture printed on either toned paper or on porcelain. In this case what is really a small room acts as the camera, the lense being adjusted in an opening in an end wall, the whole interior of the chamber taking the place of what would be the "bellows" in an ordinary camera. From the operating gallery our representative was taken into that mysterious department known as "The dark room," then to the printing balcony (where innumerable plates were being handled), then to the enamelling branch, next to the finishing room, and finally to the show-room, where the finished specimens could be pleasurably and leisurely inspected.

Several very fine oil paintings exhibited on the walls reveal the fact that Mr Kinsey, who personally takes all photographs, is an artist in oils and in water-colours of no mean ability. A large Maori subject entitled, "Rubbing Noses" possesses especial merit, and is well worthy of inspection. There is, however, a lot which will bear favourable criticism in Messrs Price and Co.'s handsome show-room and vestibule, so much, indeed, that it is impossible to detail the various pictures more than to say that some particularly happy portraits of children (finished in colors) cannot fail to incite much admiration. They are all taken with great fidelity, and each little one seems to have been caught at its very brightest moment, for Mr Kinsey is a clever and quick operator, and in the instance of children and animals always takes his photograph perfectly instantaneously. Indeed even with adults the exposure rarely exceeds three seconds, and then only when the evening is advancing and light is waning. The head-rest, too, is by no means an absolute necessity, and is very frequently altogether dispensed with.

Some splendid groups, also well taken, call for special mention. That of the Native Land Laws Commission has already had the tribute paid to it of being re-produced in the New Zealand Graphic, while two others respectively the junior and senior Rifle Championship Teams, were the subject of complimentary gift to Captain Duncan by some of the city volunteers. Another equally well taken group is one of the Wellington staff of the National Bank, which was just being mounted when our representative visited the Studio. The grouping is excellent, while the clearness of likeness and beauty of finish are perfect. Such pictures as these cannot fail to secure Messrs Price & Co. a still greater reputation for first class photography, and they will do much to strengthen the existing liberal support that firm already receives and so well deserves. Those visiting Wellington should certainly inspect the handsome samples of artistic photography, on view at Messrs Price and Co.'s studio.
Wairarapa Daily Times, Volume XII, Issue 3850, 6 July 1891, Page 2 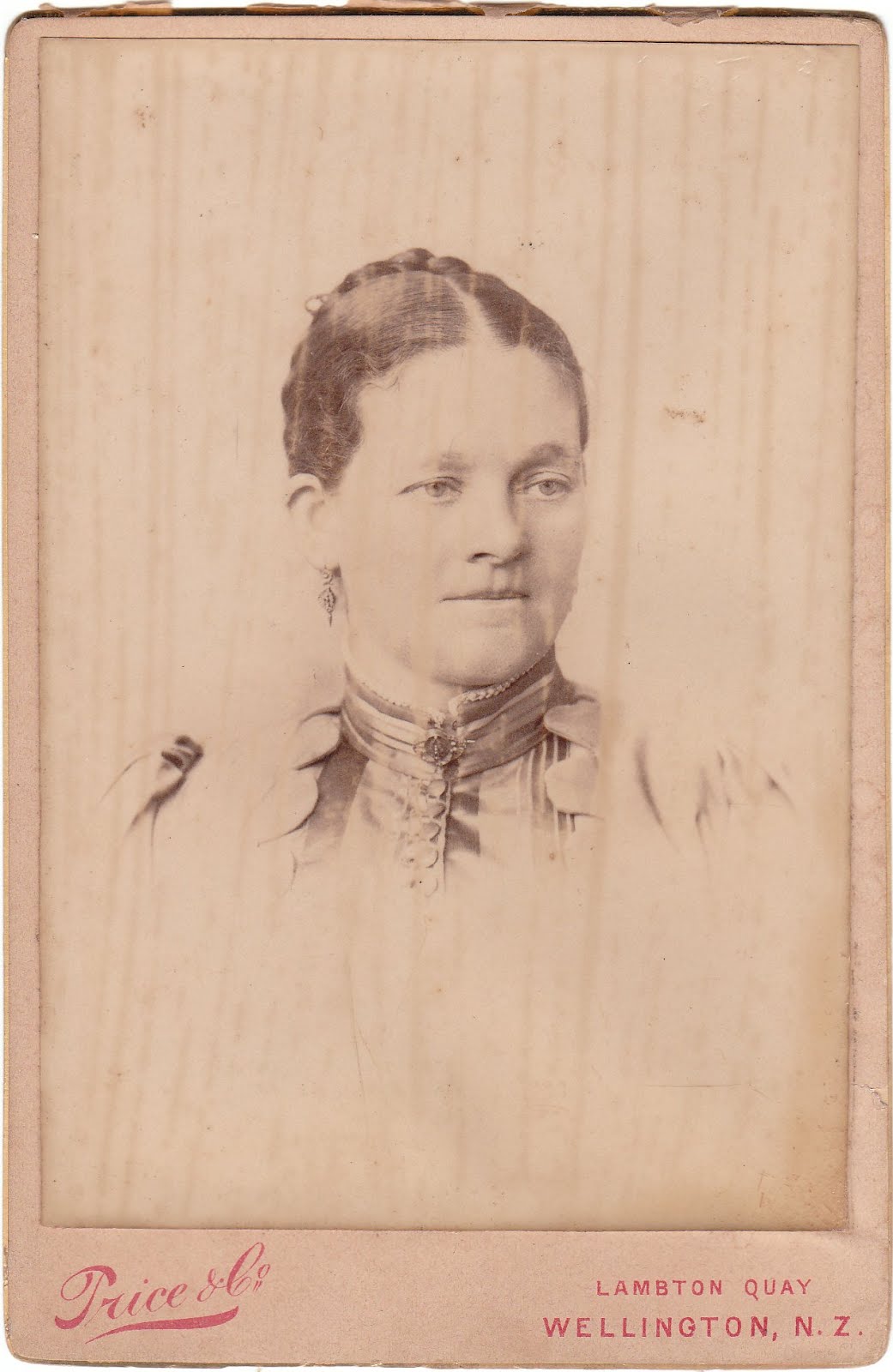 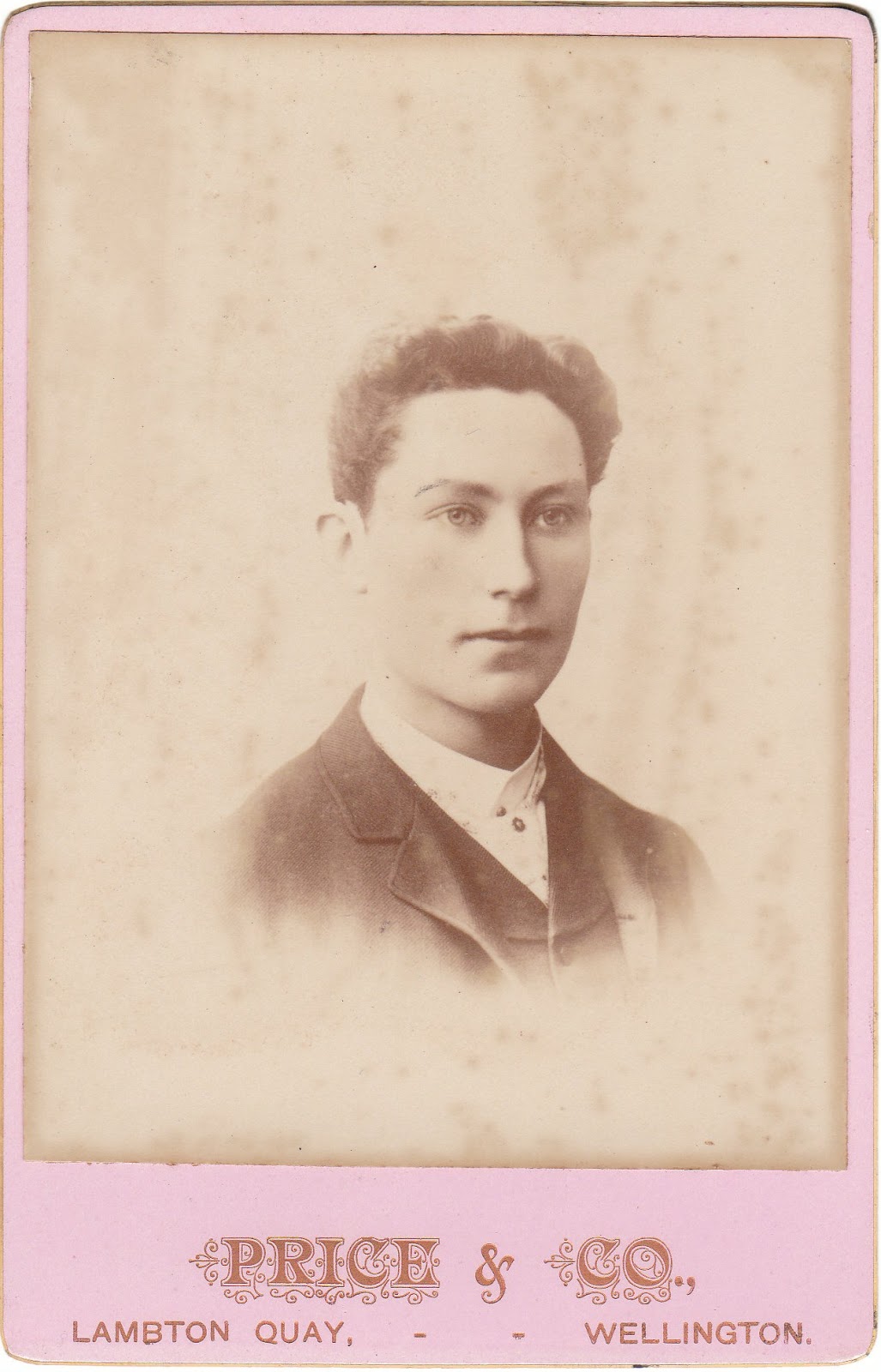 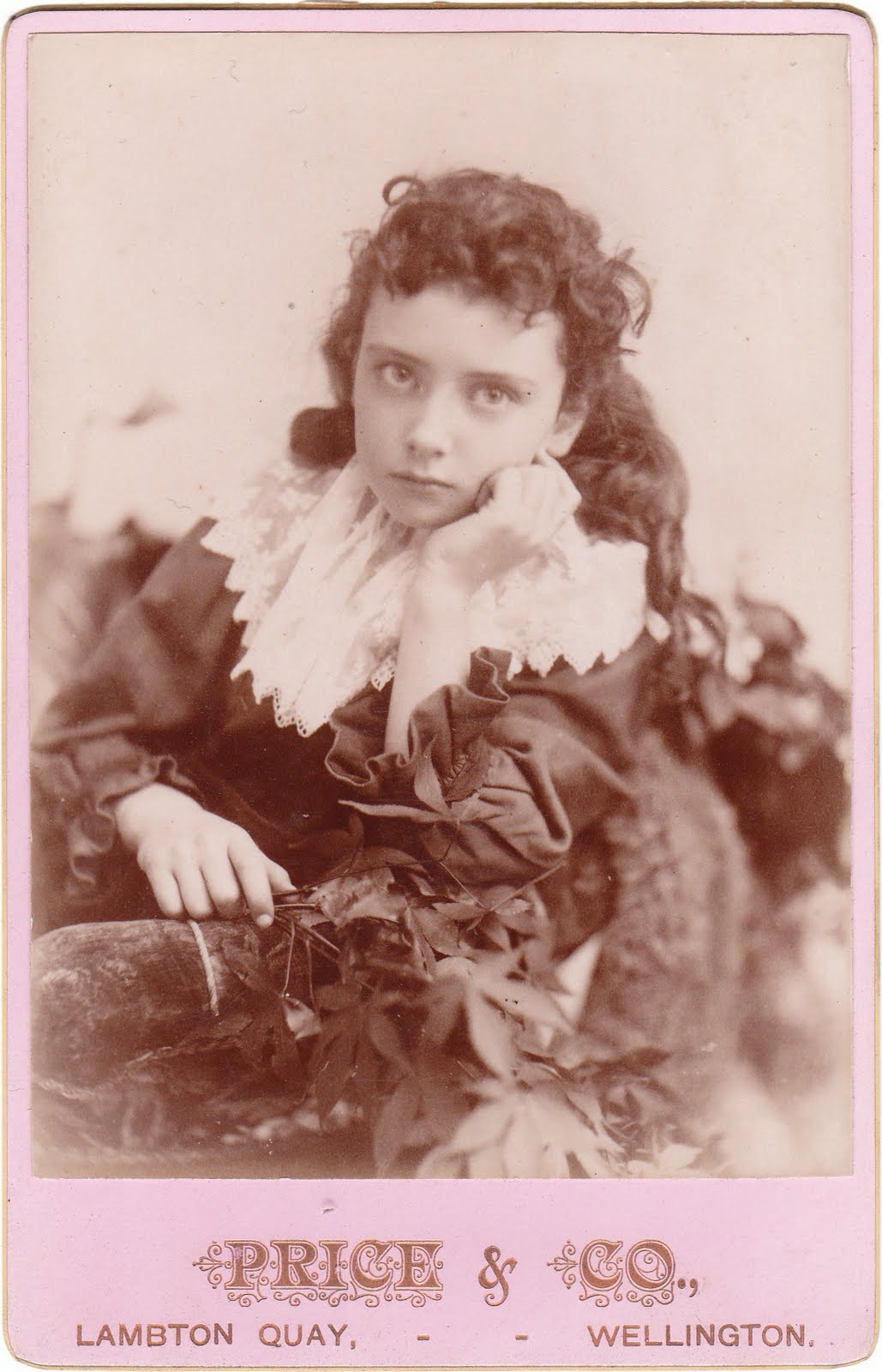 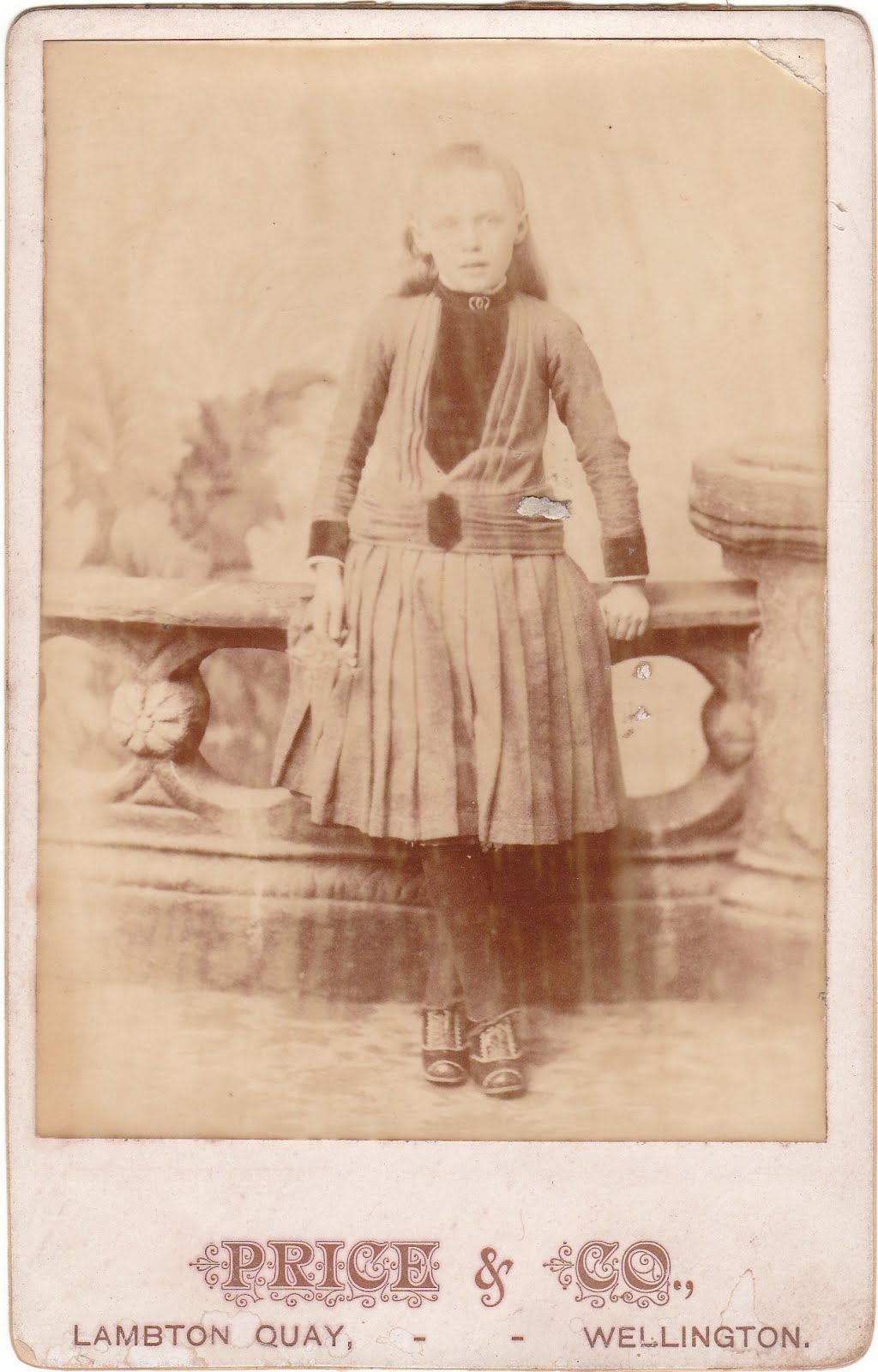 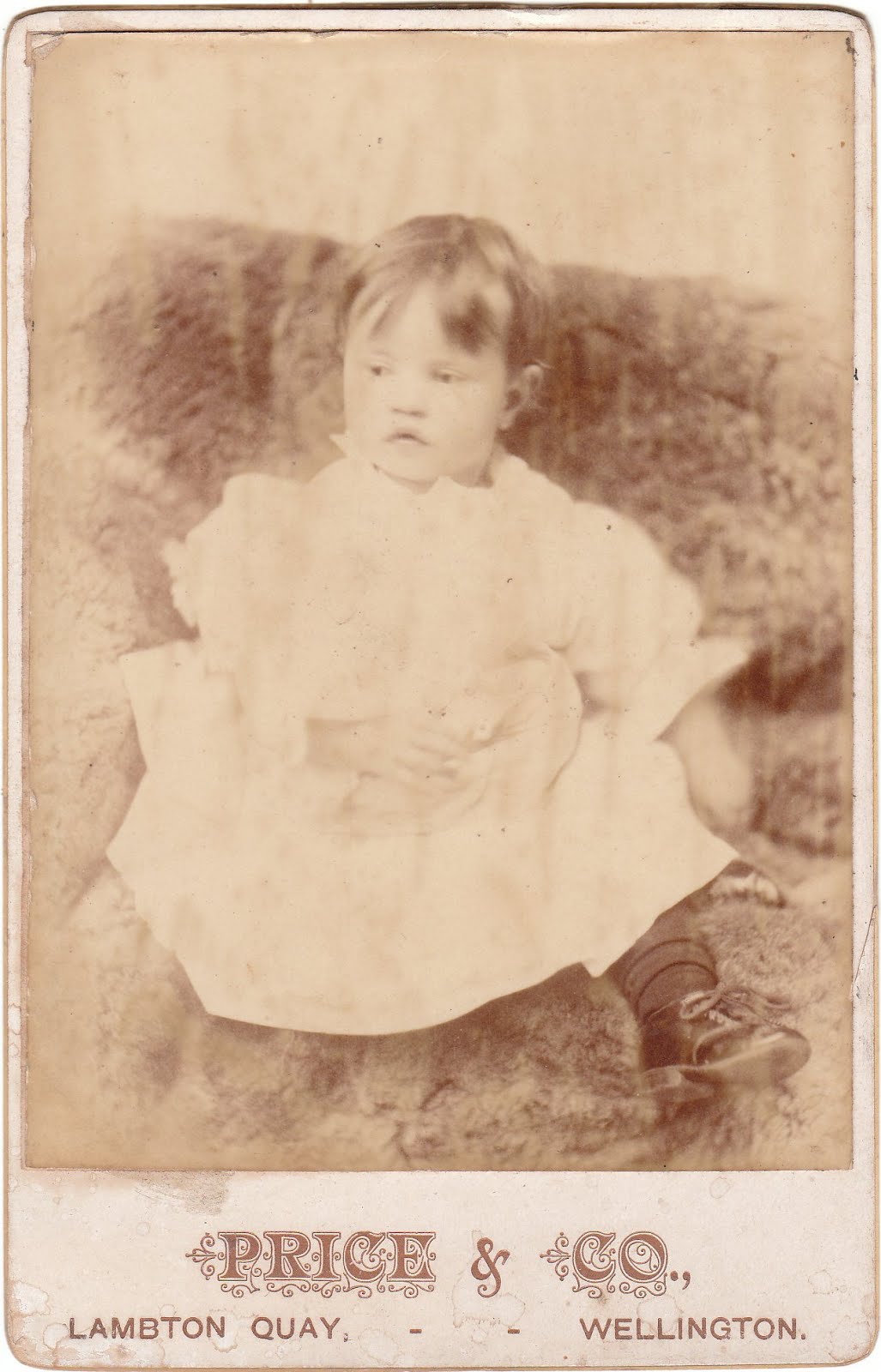 Mr. Harry Price, the popular host of the Albert Hotel, will soon be a missing number in these parts. For some time past the health of Mrs. Price has been precarious, and, with a view to trying the efficacy of a course of treatment at Rotorua, Mr. Price has sold out his interest in the Albert Hotel, and is about to leave with his wife for the Wonderland of the North.

It is now twenty nine years since Harry Price, a fresh and jolly Norfolk dumpling, first smiled upon Wellington. He came as a sailor on board the good ship Helen Denny, Captain Peters, and Harry and Wellington took so kindly to each other at first sight that the young sailor took French leave of salt junk and a life on the rolling wave, and struck out for the country. He fetched up at Carterton, and tasted the delights of farming for a while. Just about then there was a gold-diggers' rush to the Upper Thames, and Harry Price caught the fever with the rest. After seven months' searching for nuggets without finding; any, he concluded his fortune did not lie in that direction, and so he hied back to Wellington, and entered into business as a carrier. The venture throve apace. After five or six years graft, the navigator of this business was able to sell out at a good profit, and buy into the Star and Garter Hotel, at the top of Cuba-street. He remained there from 1883 till 1887, attending to the w^ints of a thirsty population, and m 1887 ho sold out, and took a trip to the Old Country, to have a look at the Yarmouth bloaters once again before he died. He came back, bought into the Star and Garter once again, and stayed on there gathering up the shekels until By that time, ho concluded there was nothing more for him to learn in the Boniface line, and so he looked round for fresh fields to conquer. Photography took his fancy, and he bought the business of Messrs. Conolly and Hermann, on Lambton Quay, and ran it successfully for about two years. At the end of that time he sold out to Mr. Kinsey, and took over the old Central Hotel, which he entirely re-modelled, and brought right up-to-date, putting in new bars, and generally brightening up the place. Once more the fit for change came over him, and he quitted the hotel to take over the produce and agency business of Messrs. Cunningham and Badham, which, in conjunction with a Mr. Francis, he ran for about eighteen months. Next, he bought the freehold of the Trocadero, sold out after eight months, took a four-months' holiday, bought a ten-years' lease of the Panama Hotel and sold it, and then bought into the new Central Hotel at Masterton, and ran it for six months. Finall v, he took over the Albert Hotel, made it a really firstclass establishment, and has been there ever since. Mr. Price s genial face will be missed from the bowling green and from his popular hostelry, but his friends sincerely hope oughly restore Mrs. Price. In the meantime, the Albert Hotel is that a sojourn at Rotorua will thornot likely to suffer eclipse or decline from the standard to which it has been raised.
Free Lance, Volume I, Issue 45, 11 May 1901, Page 3