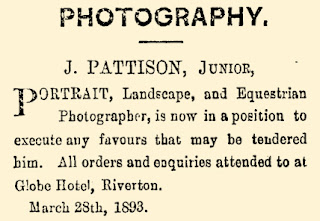 
By advertisement appearing in this issue it will be seen that Mr John Pattison, son of our esteemed townsman, Mr John Pattison, of the Globe Hotel, Riverton, has commenced business in the Western District as a portrait, landscape, and equestrian photographer. He has served a lengthened apprenticeship to the art of photography, and has had large experience both in New Zealand and Australia.


He was in the employ of Mr Dougall, whose pictures were pronounced to be works of art, and of Messrs Vandycke, Cuttle and Co., [Vandyke?] Stewart and Co.  (Melbourne), and Kingdon and Co., all admitted to be the best photographers in Australia. As a result of his connection with these eminent firms, he is quite an adept at using all the latest improvements for ensuring good pictures.


We had the pleasure of inspecting some of his work, comprising views of the Jacob’s River Estuary, taken a few weeks after his return from Australia, portraits, and views of the famous Yarrangobilly Caves (said to rival in splendour the Jenolan Caves), near Tumut, New South Wales. The pictures, which have more the appearance of hand-paintings, are a credit to Mr Pattison, especially his views of the caves, which might be equalled but not excelled by any photographer. We feel safe in saying that he will obtain many orders.

Mr John Pattison, jnr., artistic photographer, inserts a notice calling attention to the fact that he is prepared to execute orders for any kind of photographic work entrusted to his care. All orders left at the Globe Hotel, Riverton, will be executed with taste and despatch. We have had the pleasure of seeing some of the work done by Mr Pattison, and which is on view in Mr W. S. Pattison’s window, Riverton, and we feel justified in saying that it equals any done by any photographer. A picture of some members of the Birchwood Hunt Club mounted on their hunters, with the hounds in the foreground, is excellently taken, and reflects credit on the artist. The hunters come out splendidly, and it is no easy matter to photograph animals. As Mr Pattison’s prices are reasonable, we hope to hear of there being no scarcity of orders. In conclusion, we say “Go and see yourselves as the camera sees you.”

There was a good attendance at the Riverton Mutual Improvement Association on Wednesday evening, when papers were given on “ Photography ” and “ A Great Plan of Reform,” the former by Mr J. Pattison, jnr., and the latter by Mr J. C. Thomson. In the absence of Mr Pattison, Miss Pattison read his essay, which traced the discovery, progress, and improvement of the art and methods employed for producing a picture. In the course of his paper, the writer combated the statement frequently made that photography was not an art, and said that to make a good photographer one required the indispensable qualifications of skill, refinement, and scientific knowledge. Photography expressed ideas, and when the fixing of natural colors was achieved, the occupation of the painter would be superseded by the artistic photographer. The paper was much appreciated...


Officer in the Aparima Masonic Lodge No. 77


Two men named John Pattison and Alexander Beattson* were killed at Orepuki on Tuesday afternoon by a fall of earth from the face of Treseder's sluicing claim, beyond the river Waiau. Pattison is the son of a well known Riverton hotelkeeper, recently deceased.


OREPUKI.
Quite a gloom has been cast over the district by the pitiful accident at West Waiau on Tuesday. Two men in the full rigor of manhood were, without a moment’s warning, crushed to death in their tail race. Their names were John Pattison, son of the popular hostess of the Globe Hotel, Riverton, and Alexander Beatson, at one time a State farmer at Papatotara, West Waiau, a man, as far as is known, without any relations in the Colony. An inquest was held in the Commercial Hotel, Hirstfield, Mr W. P. Mirrielees, J. P., presiding, and a jury of six, of whom Mr T. Millar was foreman. Only two witnesses were examined, but although others were expected and did not roll up owing to the difficulty in crossing the Waiau, the jury considered the case to be one of accidental death, and returned a verdict accordingly. Cases like this should emphasise the necessity for something being done to ensure easier and safer communication between outlying districts and cities. Had those men been only severely hurt what could have been done for them, or what must they have suffered before surgical aid could have reached them?
Southern Cross, Volume 7, Issue 4, 22 April 1899

Obituary. — Mr John Pattison, of the Globe Hotel, Riverton, died at his residence there on Saturday last. Deceased was 76 years of age, an old colonist, and resident of the Western district. He was a native of Burntisland, Fifeshire, and took early to seamanship. In 1851 he said good-bye to the water, and spent the next eight years or so goldmining in Victoria. He then moved to New Zealand and made his home on the Aparimi. He tried digging at Tuapeka for a while, then at Orepuki, and after that took to farming above the Narrows, on the Pourakino.


Twenty years ago he took the Globe Hotel, and remained there till his decease. His widow and eight children — four sons and four daughters — constitute the family left. The funeral takes place to-day, and will be accompanied with Masonic honours.


There passed away on Sunday, at Riverton, a very old identity in the person of Mrs Pattison, widow of the late Mr. J. Pattison, so well known to all old settler of Wallace. Mrs Pattison had been in delicate health for some time. The remains were interred in the Riverton Cemetery to-day.

Posted by Early Canterbury Photography at 12:31 AM No comments: