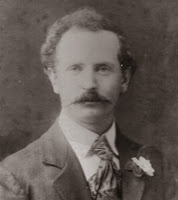 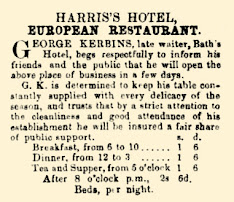 The Star (Ballarat), Tuesday 3 April 1860, page 1
Kerbins had two older sisters, Georgina Kerbins born 3 July 1865 at Armstrong Street, Ballarat and Jane Kerbins "Jeannie" born 26 January 1868 at Melbourne Road, Ballarat, there were two younger siblings, a sister Minnie Kerbins born in 1873 in Melbourne and a brother Rudolf Edgar Nicholas Kerbins born in 1878. Both these younger children died shortly after their births. Georgina married in 1882 to John Hutchinson and Jeannie married in 1890 to Charles McCoy.
Obituary
Mr. Herbert Vivian Kerbins, who died at his residence at Bellevue Hill on Tuesday, was one of the pioneers of the motor industry in Australia. He was one of the earliest car owners and one of the original members of the Royal Australian Automobile Club. He was associated with the distribution of British automobiles, and for many years was managing director of Light Cars, Ltd. He is survived by Mrs. Kerbins.
The Sydney Morning Herald (NSW), Thursday 10 June 1937, Page 8 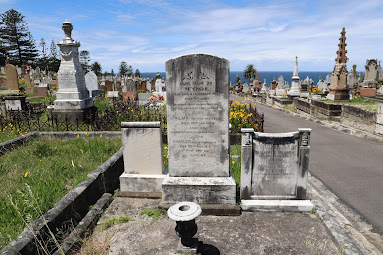 The grave and headstone of Herbert Vivian Kerbins [right]. He is buried with members of the Petersen family. 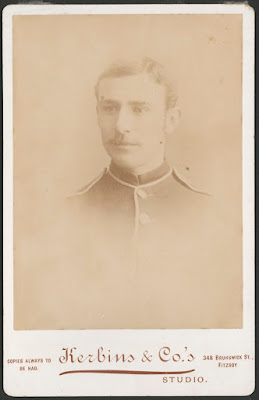 Kerbins & Co.
[Bust portrait of man, to right, with moustache, wearing military uniform].
State Library of Victoria
New Zealand
1892-1893
During the period from about April 1892 to March 1893 Vivian Kerbins worked for the Christchurch studio George Eden Co. Ltd., as the Head Printer and Manager. Eden incorrectly identified him as an American in his advertisements.

Press, Volume L, Issue 8402, 8 February 1893, Page 1
Messrs Wrigglesworth, and Binns, the celebrated photographers of Wellington have purchased the whole of the businesses of The Eden George Company, Limited. The staff, including Mr Vivian Kerbins, the manager of the work-rooms, are retained, and all persons holding deposit tickets are informed that they can use same until March 31st. Messrs Wrigglesworth and Binns will also shortly open a further studio in Christchurch for the production of their (patented) matt opal types and other work of the most fashionable type. Offers of premises for a second studio are invited.—(advt)
Press, Volume L, Issue 8417, 25 February 1893, Page 7
Early in February 1893 Wrigglesworth and Binns of Wellington purchased the studio, initially retaining the George Eden name. Vivian Kerbins then resigned with effect from 4 March 1893. However by that time he had already made arrangements to form his own photographic company Vivian Kerbins & Co., with George S. Parker, who was perhaps another former George Eden employee. 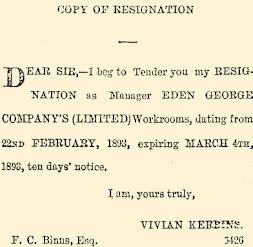 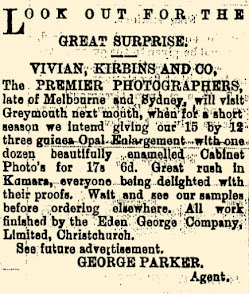 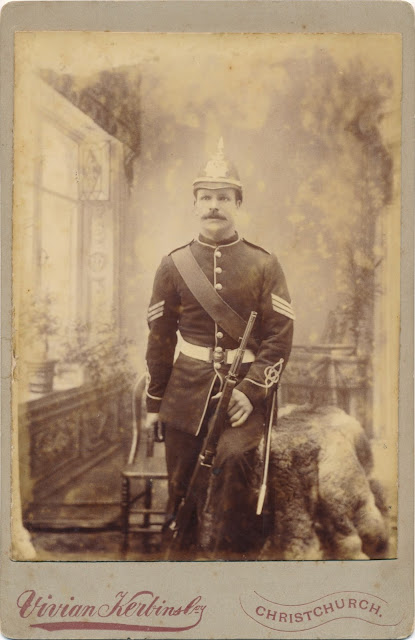 Sergeant John Millar Langdon [or John Miller Langdon] of the Brunner Rifle Volunteers. He was killed in the Brunner Mine disaster on 26 March 1896 aged 33 years. A total of 65 miners died in the disaster, almost half of the Brunner underground work force. This was the worst mining disaster in New Zealand’s history.
Photographed by Vivian Kerbins & Co., probably during their visit to the West Coast during March and April 1893.
[purchased September 2021] 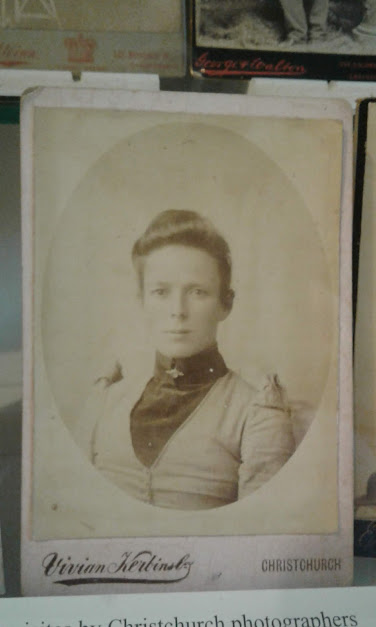 unidentified woman by Vivian Kerbins & Co.
Ferrymead Heritage Park, Christchurch
Oamaru
The Surprise firm of photographers advertise elsewhere that for one month they will offer a very special line to the public of Oamaru, as detailed in the advertisement. The firm have already established studios on the West Coast and extensive workrooms in Christchurch, and intend to leave no stone unturned to turn out satisfactory work. Mr Vivian Kerbin [sic], who is the manager of the firm, has had wide experience in Australia, and has also been managing for the well-known firm of Eden George and Co. It is the intention of the new firm to establish studios in the south.
Oamaru Mail, Volume XVIII, Issue 5583, 14 March 1893, Page 2
The Vivian Kerbins Photographic Company, who are located next the Waitaki Buildings, announce their intention of executing 12 enamelled cabinet photographs and one 15 by 12 opal enlargement for the sum of 15s. Particulars appear in our advertising columns. Mr Kerbins, the head of the company, is known in Melbourne as "the King Photographer," on account of the extensive business he carried on there. The company's head establishment is in Christchurch.
North Otago Times, Volume XXXVII, Issue 7831, 25 March 1893, Page 2
Temuka
from 3 May 1893 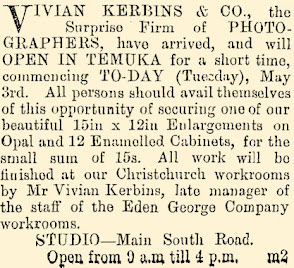 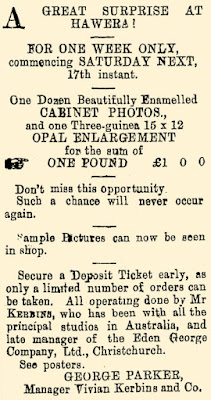 Hawera & Normanby Star, Volume XX, Issue 2459, 21 June 1893, Page 3
[this notice first appeared in the Hawera & Normanby Star on 15 June 1893 Page 3 and continued until 21 June 1893. Some overdrawing on the original image has been removed digitally.]
Olga Studio
160 Regent Street, Redfern, New South Wales.
Managed by H. Kerbins
At the marriage of Emma Moon and Henry Clifton Jones at Redfern on 15 June 1908, Mr. Kirbins [sic] of the Olga Studios presented the bride with photographs of the bridal couple.
The Ulladulla and Milton Times (NSW), Sat 27 Jun 1908, Page 8


Mr. H. Kerbins has taken over the management of Messrs. Maillard and Co., of Phillip-street. This firm holds the agency for the Brasier, Morris-Cowley, and other high-grade cars. Mr. Kerbins has been connected with motoring from its inception, and was one of the first half-dozen motorists in the State to drive a car.
Sunday Times (Sydney, NSW), Sunday 29 February 1920, page 14
Alma Margaret Kerbins
Dear Editor.- A paper was given to me entitled the Young Idea, and while looking over it I saw your offer of a pail of pretty bangles to the girl who sent you the Best Original Letter so I thought I would try. I was twelve years on the 25th May, 1892 ; I have two brothers and a sister, but as I am the youngest I have not much to do, my brothers names are Alfred and Charles, and my sister is Hilma and my own is Alma I am generally happy, but there is one thing that makes me feel unhappy when I think of it, and that is, that I have no father, he died when I was only three years old [died 6 November 1883 aged 42 years], so I do not remember much of him; he has been dead nine years now. There is a lady who is staying with us and has got a baby boy, he was born on the 23rd of May, 1892, and is going to be called Charles Albert, he is three weeks old now and is a very healthy baby; I have been promised to go out with this lady the first time she takes the baby out, I was very glad because I love little babies very much, I have not any more to tell you this time so I will now close.
-I remain, Yours sincerely, Alma M. Petersen. 56 Windsor-street Paddington.
The Dawn (Sydney, NSW), Friday 1 July 1892, Page 26
Birthday Card Led to Divorce Court
On her husband's birthday two years ago, Mrs. Olga Eva Broughton found a birthday card in his pocket, inscribed "From Alma to Glen." On the card was a picture of an elephant and the words, "An elephant never forgets." Mrs. Broughton, 44 (formerly Hart) of Girilang Avenue, Vaucluse, said this when she petitioned yesterday for divorce from Harold Glenmore Broughton, 58, photographer. She alleged that Broughton had committed adultery in June last with Alma Kerbins, of Benelong Crescent, Bellevue Hill.
The suit was undefended, and Mr. Justice Owen granted a decree nisi.
The Daily Telegraph (Sydney, NSW), Friday 14 June 1940, Page 8
1] Birth certificate downloaded and viewed - 29 August 2021
[2] The Sydney Morning Herald (NSW), Wednesday 9 June 1937, Page 14
[3] The Sydney Morning Herald (NSW), Thursday 10 June 1937, Page 9
[4] Marriage certificate downloaded and viewed - 29 August 2021
Posted by Early Canterbury Photography at 5:28 PM No comments: