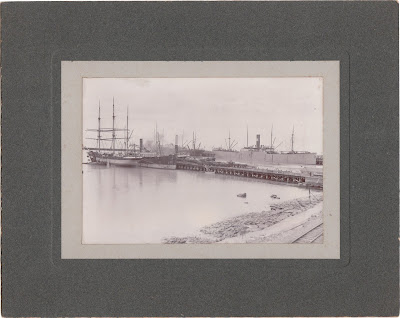 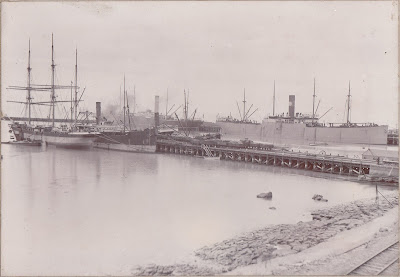 The Everton Grange
The Everton Grange, a fine new steamer built last year for Messrs Houlder Bros. and Co., of London, arrived in Dunedin from New York and northern New Zealand ports on Monday last, and in Timaru on Saturday morning, in the course of her first voyage to this colony.

The steamer, besides having a huge cargo capacity, has space for 150,000 carcasses of frozen mutton. Captain Brown, late of the Langton Grange, is in command, and reports that the new steamer has acquitted herself very creditably during her long voyage especially during the time when extremely rough weather was encountered.

About 800 miles off Cape Leeuwin four large icebergs were passed. They were observed from the steamer at a distance of about three miles in broad daylight. The largest iceberg was estimated to be about 250 ft in height, and from three quarters of a mile to a mile in length.

The dimensions of the steamer are: Length over all 490 ft, beam extreme 56ft, depth moulded 35ft 6in, deadweight carrying capacity 11,000 tons. Although the vessel is built to Lloyd's highest class, the scantlings in many instances far exceeded that society's requirements.

The Everton Grange is built of Siemens-Martin steel throughout, on the deep frame principle, with cellular double bottom, all fore and aft, for water ballast, and a remarkable feature in the construction of the vessel is the number of specially long shell plates fitted admidships, which are over 66ft long, and weigh almost six tons each, being backed up by frames 15in. deep.

The hull of the Everton Grange is divided into nine compartments by means of eight water tight bulkheads, fitted in accordance with Board of Trade requirements. She has six large cargo hatches and eleven powerful steam winches, with a special arrangement of derricks for the rapid handling of cargo, the vessel being able to discharge cattle and cargo and do her bunkering at the same time without one operation interfering with the other. The whole of the cargo holds are controlled by steam fire appliances.

The vessel has two complete steel decks, and in addition a steel shade deck above, with a bridge 125ft long on top of some.

Arrangements are made for carrying 750 head of cattle under the shade and bridge decks, the holds and 'tween decks being insulated for the carriage of frozen meat.

The vessel is rigged as a four-masted fore and aft schooner. The twin-screw triple-expansion engines, of massive design, fitted by. Messrs Richardson, Westgrath, and Co., Limited, Hartlepool, ran exceedingly well throughout the official trial, a speed of over twelve knots being attained. The sizes of cylinders are 23in, 36in, 59in, by 42in stroke, with five boilers; 15ft 9in by 11ft, working at a pressure of 1801b per square inch.

Messrs D. C. Turnull I and Co are. the Timaru agents for' the vessel. She will load here about 11.000 sacks of grain for London, and will be despatched to-day or to-morrow for an Australian port, where she will complete her loading for South Africa and London.

Posted by Early Canterbury Photography at 6:38 PM No comments: