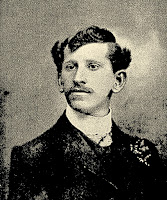 Stone's Canterbury, Nelson, Marlborough and Westland Directory April 1914
Photographers - Valentine Tom S. Kaikoura, Marlborough
Obituary.
Mrs T. S. Valentine. The many friends of Mrs T. S. Valentine will regret to learn that she died at the Kaikoura Hospital on Sunday night, after a lingering illness, at the age of 39 years. Mrs Valentine was the daughter of the late Mr William and Mrs Martha Lewis, and was born at Ogniore [sic], Wales, in 1891. She is survived by her husband and three young daughters. Mrs Valentine possessed a most cheerful disposition, and was ever ready to assist in all social and sporting functions. She will be greatly missed by a large circle of friends.
Press, Volume LXVI, Issue 20016, 26 August 1930, Page 2
[1] Age at death not independently confirmed
[2] Online Cemetery Database, Ashburton District Council
Posted by Early Canterbury Photography at 11:14 PM No comments:

Kaikoura - Mr F. W. Weidner, photographer, died on Friday last from heart failure. As he had not been seen about on Friday afternoon and Saturday. Constable McLennan made an investigation, and discovered him lying on his bed dead. He was of a retiring disposition and lived alone. It is unknown whether he has relatives in New Zealand. An inquest was held before Mr J. Davidson (Acting-Coroner) and a jury comprising Messrs A. W. Barker (foreman), A.B. Clark, W. Bodger, and T Alexander, when a verdict was returned that death was due to sudden cardiac failure, following on a condition of advanced myo-cardial degeneration.
Press, Volume LXV, Issue 19756, 22 October 1929, Page 3

Death of F. W. Weidner.
Residents of Kaikoura will regret to learn of the death of Mr F. W. Weidner, photographer, which occurred with tragic suddenness some time on Friday last, from heart failure. As M Weidner had not been seen about on Friday afternoon and Saturday, Constable McLennan made an investigation, and discovered deceased lying on his bed dead, on Saturday evening. The deceased carried on the business of photographer, and took a keen pride in his work, his landscape and seascape views being equal to anything produced in the Dominion. He was of a retiring disposition, and lived alone. It is unknown whether he has relatives in New Zealand. The funeral of deceased will take place this afternoon.


Coroner's Inquest.
Before Mr J. Davidson (Acting Coroner) and a jury comprising Messrs A. W. Barker (Foreman), A. B. Clark, W. Bodger, and T. Alexander, an inquest was held at the Hospital last evening, Constable McLennan conducting the enquiry. The jury having viewed the body, the following evidence was addressed:—

Harold C. Harrison stated that he identified the body lying at the Morgue as that of Frederick William Weidner, a photographer, who resided in a shop at the northern side of Curran’s garage, on the Esplanade. Witness last saw Weidner alive at 7.30 a.m. on Friday, October 18, when he was standing at the front door of his shop. Weidner remarked that it was going to be a fine day, after which he went inside his shop. Witness did not see him after that. At the time deceased was not fully dressed, and appeared as if he had just got up, his braces hanging loose around his trousers. So far as witness knew. deceased was a single man. Witness did not think he had relatives in New Zealand. He thought deceased’s age would be about 52 [?] years.
Constable W. McLennan stated that on the 19th instant he was passing the shop of deceased, and seeing no lights in the windows, and noticing two dogs chained behind the shop, thought Weidner might have been ill, having ascertained that he had not been seen about, since Friday morning. Witness opened the side window and entered the room, where he found deceased dead. He was fully dressed, with the exception of boots, waistcoat and coat, but had an overcoat on, his braces being attached to the buttons on his trousers back and front, by hanging downwards towards the knees. Deceased’s watch was hanging on a nail above the body. Deceased was lying on his back on a stretcher with his feet on the floor. From the state of the body it appeared as if he had died on Friday morning, October 18. Witness examined the body, and saw no marks of violence, nor were there any suspicious circumstances. Witness called in Dr. Withers, who examined the body before it was removed to the Morgue. Witness examined the premises, and there were no indications to suspect poisoning.

Dr. R. L. Withers stated that at about 7.30 p.m. on Saturday, October 19, he was asked by the police to inspect the body of the deceased. Witness found him half lying on his bed, and considered deceased had been dead for at least 24 hours. There were no signs of death having been due unnatural causes. Witness had never attended deceased for any illness. He had made a post-mortem examination at the Hospital Morgue on October 20. There were no external marks of injury or violence, and no evidence of any poisoning. Witness’s examination led him to the conclusion that death was due to sudden cardiac failure, following on a condition of advanced myocardial degeneration. Otherwise the body was that of a healthy man.
The jury returned a verdict in accordance with medical evidence.
Kaikoura Star, Volume XLIX, Issue 83, 21 October 1929, Page 2 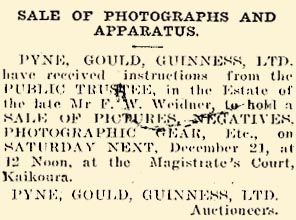 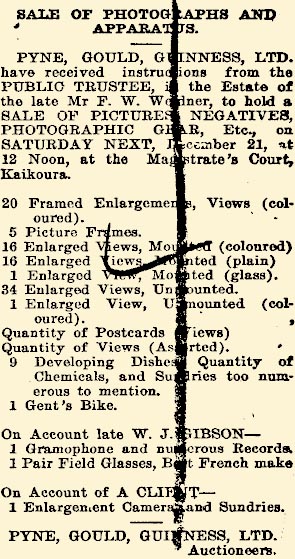 Weidner Collection
Enquiry from Turnbull Library about Photos.
After considering an enquiry from the Alexander Turnbull Library concerning the Weidner photograph collection, which had been acquired by the County during the disposal of the late Mr Weidner’s property, the Council at its monthly meeting on Friday decided to accede to the request of the librarian in the photograph section (Mr G. C. Heron), and make the collection of plates available.

The letter of enquiry read as follows:
“In its work of preserving the historical photograph collections of New Zealand, the Alexander Turnbull Library has become acquainted with the work of a Kaikoura photographer, Mr Weidner. Knowing that a portion of his work still exists and is in your possession, the Turnbull Library is anxious to take steps to assure its preservation and make prints of its available, as occasion demands, to historians and the press.

“For this reason 1 have been authorised by the chief librarian, Mr C. R. H. Taylor, to suggest the following for your consideration: If you deposit the negatives of this collection in this library immediate steps will be taken to catalogue them and attention given to any that show signs of deterioration. When this has been done, a complete set of the prints will be made, of as fine a quality as possible, and after they have been appropriately captioned and the library’s number put on each, they will be presented to your council. Then if any further copies are required it will be necessary to furnish us with the number only.
“Perhaps it is necessary to state that the Turnbull Library is administered by the Internal Affairs Department, and so belongs to the people of New Zealand and operates only by government grant and private donations. The work of preserving photograph collections is an expensive one, and one from which no financial remuneration can be expected, but the work is necessary and continues.

“It may be thought that this arrangement may deprive Kaikoura of a historical record, but in taking a collection of negatives it is replacing in a set of prints a far more useful, accessible, and attractive record.

“I am enclosing a copy of a pamphlet concerning our photograph collection which though somewhat out of date, covers some points I have not mentioned.

“I shall await with interest your reply to this proposal, and should it be acceptable to your council, will personally arrange the packing and freighting of these valuable glass plates.”

Cr. P. S. Humm, who said that the collection was very well-known, pointed to the photographs around the Council room, many of which had been the work of the late Mr Weidner, and the plates of which were bought by the Council many years ago. The fact that such an important institution as the Alexander Turnbull Library had sought to acquire the collection for preservation gave them considerable value, and would make them available to a greater number of people.

The County clerk (Mrs S. A. Hewson) added that the plates were packed away in boxes and in the course of time would become valueless through deterioration. On the proposition of Cr. R. R. Laidlaw, seconded by Cr. R. R. McRae, it was decided to accede to the request of the library.
Kaikoura Star, Volume LXVIII, Issue 25, 5 April 1948, Page 3

Weidner Collection
Turnbull Library Seeks Information.
In order that the library might have as complete a record as possible, information concerning the whereabouts of plates or negatives taken by the late Mr Weidner would be appreciated by the Turnbull Library, Wellington.

Recently Mr G. C. Heron, who is in charge of the photograph section of the library, was in Kaikoura to pack the plates donated by the Kaikoura County Council prior to their being forwarded to Wellington. Mr Heron said there were only 200 plates in this lot, and he considered that while Mr Weidner was in Kaikoura he must have taken many more than that number.

“There seems to be a mystery surrounding the work of Mr Weidner,” stated Mr Heron, “and the lack of information is a serious handicap to the cataloguing of such a fine collection of photographs."

It was possible, said Air Heron, that other plates were offered at auction with those purchased by the County Council, but thought of no value and destroyed. Again, they may have been bought by someone, stored away, and forgotten.

“Any information, no matter how little, will be appreciated,” said Mr Heron, whose address is care Turnbull Library, Wellington. During his visit to Kaikoura Mr Heron located a number of plates which had been taken by Mr Weidner but which had become useless through having been left out in the rain. Mr Heron asks that he be given an opportunity to inspect plates or negatives, no matter how worthless they may appear, before they are destroyed.
Kaikoura Star, Volume LXVIII, Issue 39, 24 May 1948, Page 2 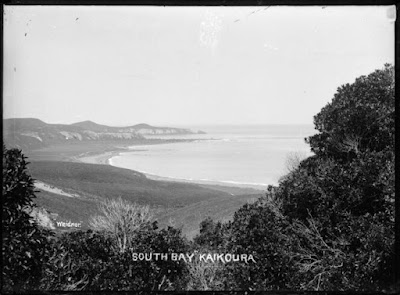 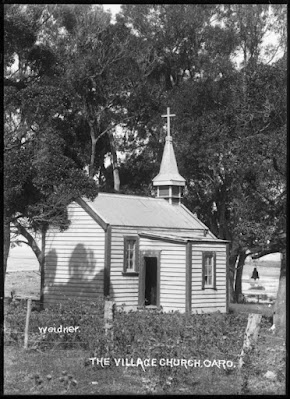 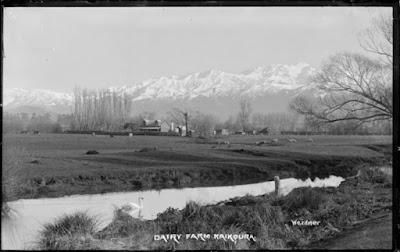 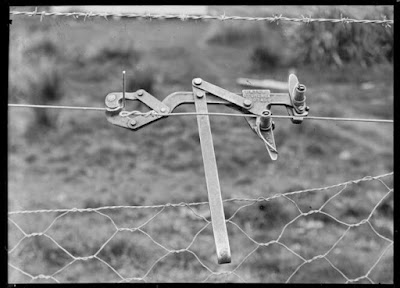 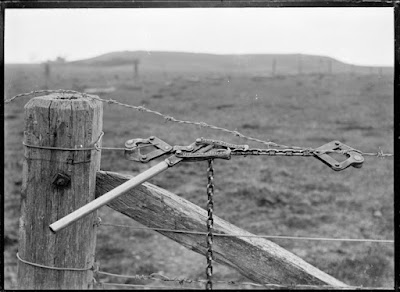 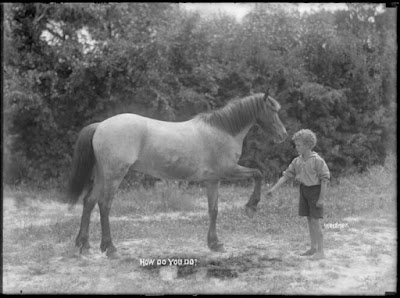 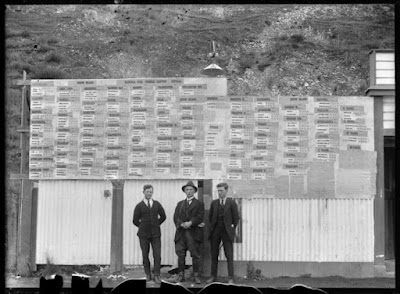 Group in front of the Kaikoura Star general election results board. Weidner, Frederick William, 1876?-1929: Negatives of Kaikoura and district. Ref: 1/2-021804-G. Alexander Turnbull Library, Wellington, New Zealand. /records/22326792
Weidner, Frederick William, 1876?-1929: Negatives of Kaikoura and district
Date: 1910s - 1920s
By: Weidner, Frederick William, 1876?-1929
Ref: PA-Group-00363
Description: Source of title - Title supplied by Library
Quantity: 278 b&w original negative(s).
Provenance: Negatives made by Kaikoura studio of F W Weidner, which passed into the possession of Kaikoura County Council
Processing information: Archivists notes - Originally arranged and described in 1993. Reference number changed from PAColl-3067 to PA-Group-00363 in 2008.
Access restrictions: No access restrictions
Format: 278 b&w original negative(s), Negatives
[1]  Superintendent Ryeland. We regret to announce the death, at his residence, Surry Hills, on Saturday, of Mr. James Ryeland, for many years superintendent of the police depot and the coastal district. Mr. Ryeland, who was in his 66th year, was a native of Gloucestershire, England, and came out to this country in the Bangalore in 1855, under engagement with the Government to join the police force here. He had previously served for five years in the London police, and was specially recommended for the colonial service. On arrival here it was soon seen that his high testimonials were fully deserved, for by strict attention to his duties and his sterling qualities he rapidly rose till he attained the position of superintendent, which he filled with credit to the office and to the great satisfaction of his superiors.
Australian Town and Country Journal (Sydney), Sat 5 Nov 1892, Page 14

Posted by Early Canterbury Photography at 9:56 PM No comments: 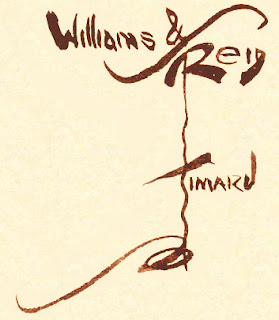 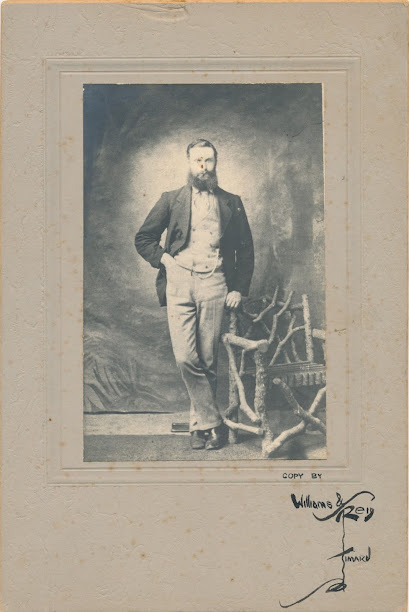 A copy by Williams and Reid, Timaru of a photograph by an unknown photographer.
Posted by Early Canterbury Photography at 4:30 PM No comments: