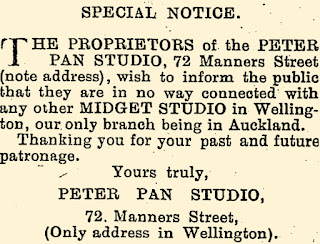 
Called in the Ballot
No. 1 Military Service Board
Sitting in Wellington
James Atkinson, photographer, Wellington, applied for temporary exemption for one month. Decision was deferred till 27th June—to give Atkinson time to sell his photographic apparatus.
Evening Post, Volume XCIII, Issue 130, 1 June 1917


Disposal of a Business. James Atkinson (32), photographer, living at the Caledonian Hotel, appealed on the ground of undue hardship. He stated that he wanted a month's exemption to enable him to dispose of his plant and business. Captain Walker: "Why not store your plant until you come back?" The appellant: "There is always the possibility of my not coming back." The case was adjourned until the 27th inst.
New Zealand Times, Volume XLII, Issue 9676, 2 June 1917


Manners Street Fire
The Fire Brigade was called at 11.0 p.m. yesterday to an outbreak in Manning's Buildings, 72, Manners street. The fire started in a room on the first floor used for finishing work by James Atkinson, a photographer. This, with its contents, was severely damaged by fire and water. The contents of Mr. Manning's office on the ground floor suffered from water. Mr. Atkinson's plant was covered by a policy for £600 in the Alliance Office. The insurances on the building and Mr. Manning's material are not available.
Evening Post, Volume CV, Issue 131, 5 June 1928

Posted by Early Canterbury Photography at 12:31 PM No comments: