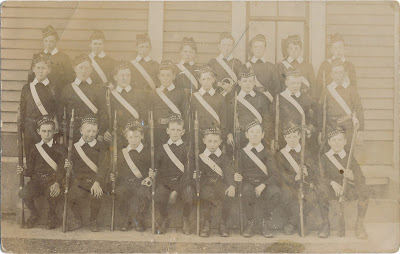 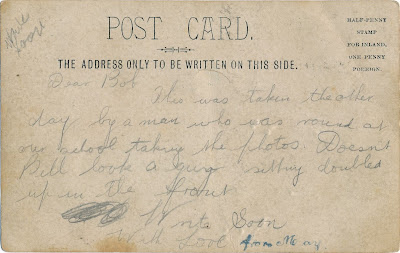 "Dear Bob. This was taken the other day by a man who was round at our school taking the photos. Doesn't Bill look a gun[?] sitting doubled up in the front. Write Soon. With Love from May." 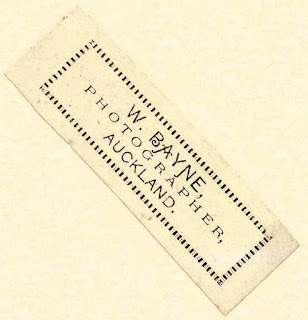 
Whangarei
Whangarei from 14 July 1889 to about 18 November 1893, succeeded by J. T. Cowdell.
Mr W. Bayne, a photographer of experience, is visiting the district for a few days, and orders left at Mr Jenkins will receive attention. We understand he contemplates commencing business here. — Advt.


We understand that Mr Bayne has completed his new phographic [sic] gallery, and that he opens for business to-morrow, Saturday.


Mr W. M. Bayne, the well-known photographer, who during the past few years has "taken" so many of the inhabitants of this district has now gone one step further and taken unto himself a wife. On Saturday last he was united in the bonds of holy matrimony to Miss Margaret Grace Hill, of Sandhurst, Victoria, the ceremony taking place in the Wesleyan Church before a large assemblage of people, the Rev. J. Thomas being the officiating clergyman. Miss Bayne and Miss McKenzie were the bridesmaids and Mr David McKenzie the best man. There were the usual showers of rice, and the subsequent wedding breakfast followed. We felicitate Mr and Mrs Bayne upon their union and wish them all sorts of happiness.
Northern Advocate, 25 October 1890 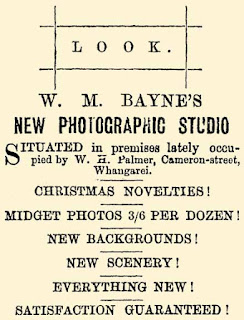 
Mr W. M. Bayne, photographer, has removed into his new studio, in the premises lately occupied by Mr W. H. Palmer [William Hall Palmer, watchmaker and jeweller, father of the photographer Thomas Grice Palmer]. The studio is filled and replete with all necessary conveniences, and some very choice scenery has been added to the gallery. The premises are both handsome and commodious and a credit to Whangarei.
Northern Advocate, 31 October 1891 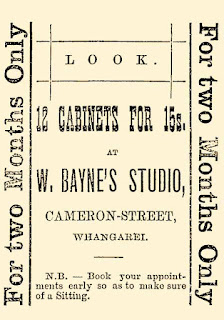 
In this issue Mr W. Bayne, art photographer, intimates that he has opened studios in Hamilton and Cambridge, and proposes to divide each week between the two places. He can be seen at his studio, Grey-street, Hamilton East, on Monday until midday, and on Thursday, Friday and Saturday; and at Mr Tennent's, Cambridge, on Monday, after arrival of train, and on Tuesday and Wednesday in each week. Mr Bayne, since acting for Mr Hemus, of Auckland, has been favoured with a fair share of the patronage of the public, which he trusts may be continued now that he has thrown in his lot with us and become a resident in the district, Mr Bayne has had fourteen years experience in the colonies, during which period he has been employed in some of the best studios in the Australian colonies, and this should be a guarantee of first-class work. 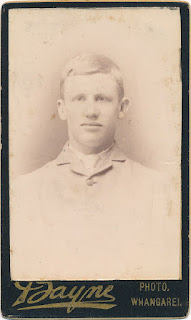 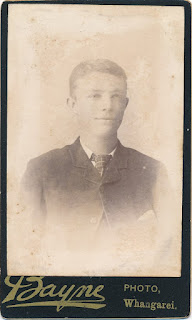 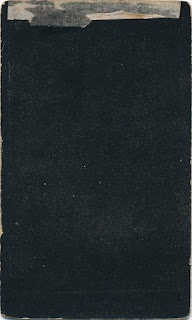 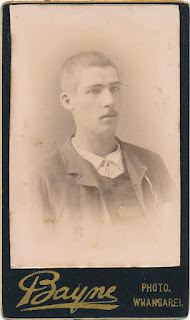 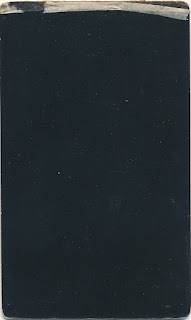 [purchased February 2022]
The premises taken and fitted up by Mr. W. H. Bartlett, of Auckland celebrity, for artistic photography are to be open for public inspection this evening. The studio is in Veie's Buildings, adjoining Messrs. Morey's establishment, and is under the management of Mr. W. Bayne, who has had over 17 years' experience in the profession. The show cases that will be on view contain samples of all the popular types and styles of photography, those of the black and white specimens being particularly good and approaching to the beauty and finish of engravings. The enlargements are splendid works of art, and yet intensely natural. From babies to the Premier there are photos in plenty, and altogether a most attractive exhibition will be found. The public are cordially invited to inspect the whole of the premises and the contents, and as incandescent burners will be used for lighting purposes every facility will be given for a favourable view.
Taranaki Daily News, Volume XXXXII, Issue 81, 7 April 1900

Auckland
An up-to-date photographic studio has been opened by Mr. W. Bayne in the recently erected buildings, Karangahape road, opposite the Baptist Tabernacle. The internal fittings are all in oiled rimu, and the lighting has been admirably arranged. In the show-room may be seen excellent samples of Mr. Baynes' photographic work. The "Tadema" studio is fitted up with all requisite conveniences. 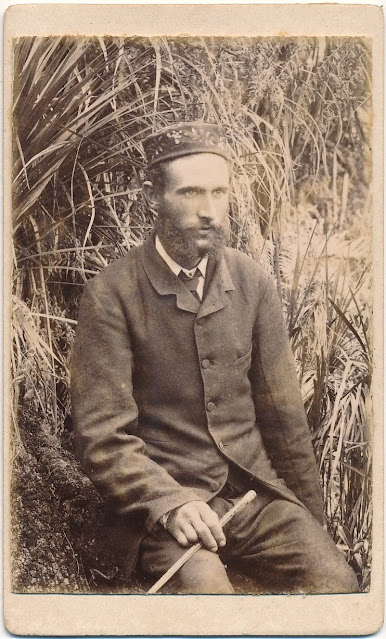 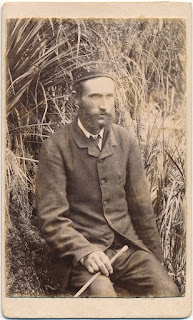 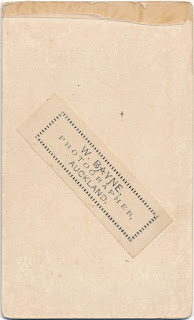 Come to Stay.
Mr Walter Bayne, whose son runs the popular photographic studio in Cameron-street, has come to Whangarei to stay. Mr Bayne, sen , is an artisan of some repute. He made and exhibited at the Melbourne Exhibition [1888] a piece of cabinet work which was described as follows by the Auckland Star :— "For artistic design and excellent execution it is questionable whether this fine piece of workmanship can be beaten. The cabinet is a large one, being fitted up with innumerable drawers and jewel cabinets. In the front is a writing desk, and facing that is a large sliding panel fitted with weights. This is pushed down, and reveals 12 drawers, each faced with handsome pieces of kauri and rewarewa. The sliding panel is a fine piece of work. In the centre is a medallion, on which is carved representations of various native ferns. Adjoining this are five side panels of mottled totara. The pedestals [are]massive, and when opened disclose large [cabinets] capable of holding silver plate, etc. These pedestals have dark rimu moulding with totara beadings.

Inside the drawers are lined with blue velvet. The side cabinets have pods of peas carved upon them, and the head-piece is a bunch of grapes carved but of mottled kauri with leaves carved from plain red totara. Beneath the desk is another handsome panel of clouded kauri, while the claw of the pedestal is carved from plain kauri, to which is affixed a bunch of grapes carved out of New Zealand birdseye maple. There is no stain whatever used on the wood, and the effect of the tasteful grouping of the various woods is very pleasing. The pleneth is composed of rimu, mottled totara, rimu and various kinds of kauri. Hakehake and kahikatea wood is also used in the construction of the cabinet. This is truly a work of art, and does not look at all out of place in an art gallery.", Mr Bayne secured awards for this work at the Melbourne exhibition.