The Late Mr. J. M. Spence.
Interred at Whareora.
The funeral of the late Mr. James Spence took place yesterday afternoon, the remains of the deceased being first conveyed to the Church of England, where service was conducted by Mr J. C. Johnson, after which the cortege left for the Whareora cemetery.

Amongst those present at the funeral were the two sons as well as many of the old-time friends of the deceased, and an abundance of floral wreaths testified to the esteem in which he was held.

Mr. Spence was a very old resident of Whangarei. He was the only son of Captain Spence, a seafaring man from Montrose, Scotland. At the age of about 13 years he arrived with his parents in Auckland in 1861, and after a short stay there journeyed north to Whangarei, where Captain Spence took up land at Parahaki. The holding in those days was covered in dense bush and the young lad found himself faced with plenty of hard work for many years. He then took up various other occupations and upon the death of his parents came into Whangarei to live, doing accountancy and other work. He was married to Miss McKenzie [Christian McKenzie], sister of Mr. J. D. McKenzie, chairman of the Harbour Board, and they reared a family of three sons and two daughters. The eldest, James, was killed at Gallipoli, while the youngest, Hector, was severely gassed. The second son, William, is resident in Wellington. The two unmarried daughters live in Whangarei with their mother.

Friends of the deceased gentleman say that the death of his eldest son had a serious effect upon his health and that he began to fail from that date. Mr. Spence took a great interest in the collection of coins and stamps, and he is reported to have gathered some very valuable specimens. As a landscape photographer he showed great skill and he has left many beautiful records of Whangarei scenery.
Northern Advocate, 25 June 1919, Page 2 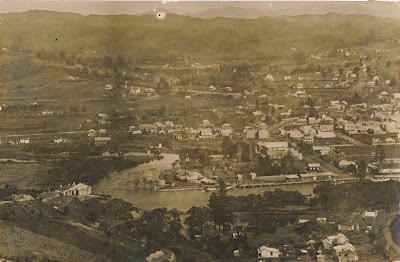 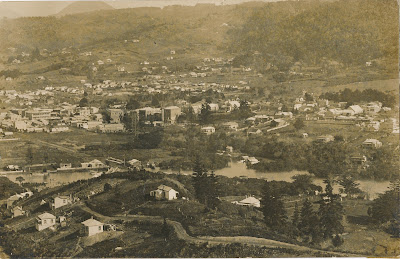 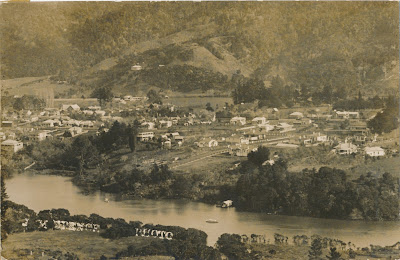 Panorama of Whangarei by James Mearns Spence
Auckland Libraries Heritage Collections AWNS-19171004-39-1
Showing a panorama of the town of Whangarei on the banks of the Hatea River in 1917.
Taken from the supplement to the Auckland Weekly News 4 October 1917 p039
Whareora ...Capt. Spence has left this district after a residence of over a quarter of a century amongst us. Capt. and Mrs Spence were much respected here and carry with them the best wishes of the settlers of this neighbourhood. They have gone to reside in Mairtown, Whangarei.
Northern Advocate, 5 November 1887, Page 2
Posted by Early Canterbury Photography at 6:51 PM No comments: 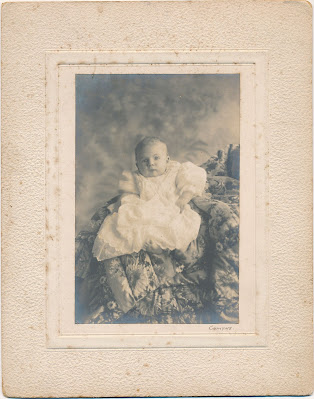 Posted by Early Canterbury Photography at 6:20 PM No comments:

Joseph Tuffley Cowdell born circa 1862, Seaton, Rutland, England, died 30 July 1907 Whangarei, aged 45 years, reg. 1907/9837. Brother of the photographer Thomas Melling Cowdell
Private advice received from Whangarei reports the death there this morning of Mr. Joseph Tufley Cowdell, a Past Master and secretary of the Masonic Lodge Star of the North, N.Z.C., at the age of forty-five. He leaves a wife and five children.
Evening Post, Volume LXXIV, Issue 26, 30 July 1907, Page 5
Cowdell, Joseph T.. Art Photographer, Stationer, and Fancy Goods Repository, Cameron Street, Whangarei. Bankers, Bank of New Zealand. Private address, Dent Street
Mr. Cowdell established his business in 1893, and conducts it in premises which are suitably fitted up and well stocked with stationery, all kinds of books, fancy goods, etc., sufficient to thoroughly satisfy the demands of his numerous customers. The studio adjoining the shop is very well lighted and is furnished with all the necessary requisites; it is one of the best north of Auckland and is recognised by all who have seen it to be equal to any country studio in the Colony. Mr. Cowdell has in the space of a few years made remarkable strides in his business, having formed a wide connection.
He was born in Rutlandshire in 1862, and after a few years of clerical life came to Australia where he spent three years as a travelling photographer, finally establishing himself at Broken Hill very successfully for seven years. His health failing, he was obliged to seek a more equable climate, and coming to New Zealand, travelled through the greater part of this Colony, and eventually settled at Whangarei. His work is decidedly creditable and the views of Whangarei, which these pages contain, are specimens of his skill as a photographer.
The Cyclopedia of New Zealand [Auckland Provincial District]. 1902
Owing to ill-health, Miss Hanson, of Mr Cowdell's photographic studio, has gone to her home in Auckland for a few weeks' rest and change.
Northern Advocate, 10 August 1903, Page 2
Mr J. T. Cowdell, photographer, Cameron - street, is leaving Whangarei for a week or so, but during his absence the studio will be open under the charge of Miss Hanson.
Northern Advocate, 5 May 1906, Page 2
The well-known photographic studio (late Cowdell's) in Upper Cameron Street has been taken over by Mr T. G. Palmer, who has been connected with the studio for many years. The studio possesses a modern equipment and Mr Palmer intends to produce only high-class and artistic photographs and enlargements. Picture-framing will also form a branch of the business, and as the complete stock of Mr Cowdell's negatives are kept, Mr Palmer will be able at any time to execute orders for photographs taken by the previous proprietors.
Northern Advocate, 19 September 1910, Page 4 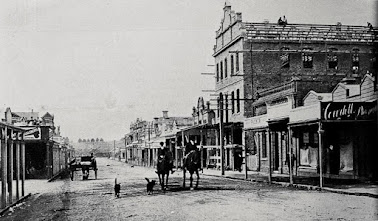 Cowdell's studio in Cameron Street, Whangarei is the single story building shown on the right of this photograph.
Auckland Libraries Heritage Collections AWNS-19080924-4-4
Taken from the supplement to the Auckland Weekly News 24 September 1908, p004 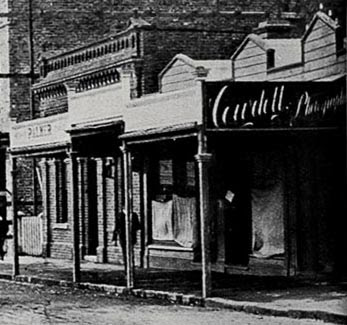 Cowdell's studio
The death of Mr Samuel Cowdell at Mairtown removes a highly respected resident of Whangarei. He was approaching 81 years of age, and during the last six or seven years has been an invalid, living with his daughter.in-law in Mill road.
Northern Advocate, 30 March 1916, Page 2
Cowdell — At the residence of his daughter-in-law, L. Cowdell, Mill road, Whangarei, on March 26, Samuel Cowdell, of Leicester, England, aged 80 years. Auckland papers please copy.
Northern Advocate, 30 March 1916, Page 2 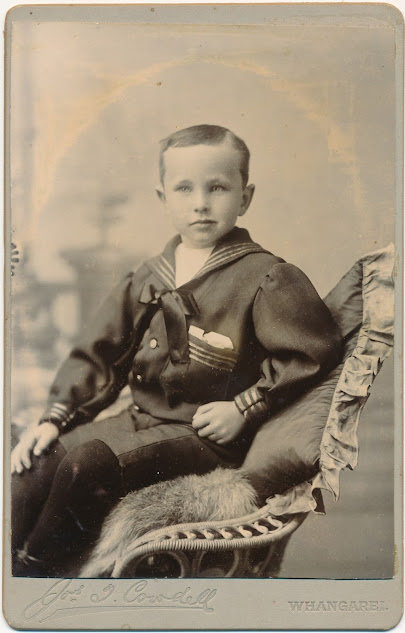 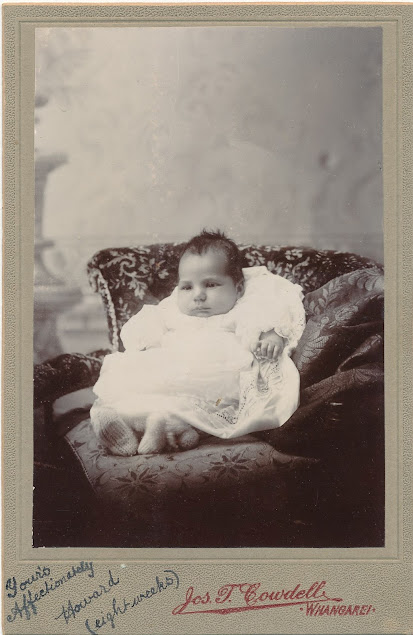 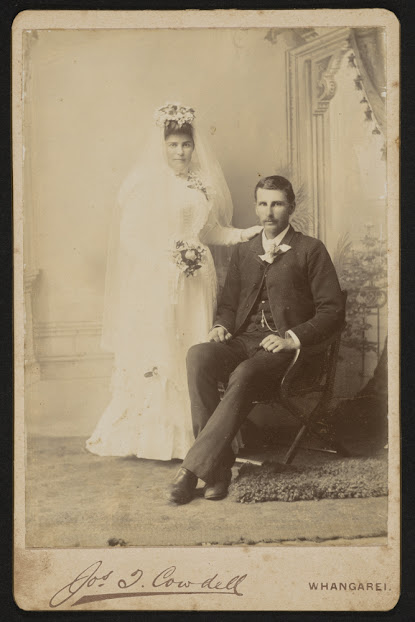 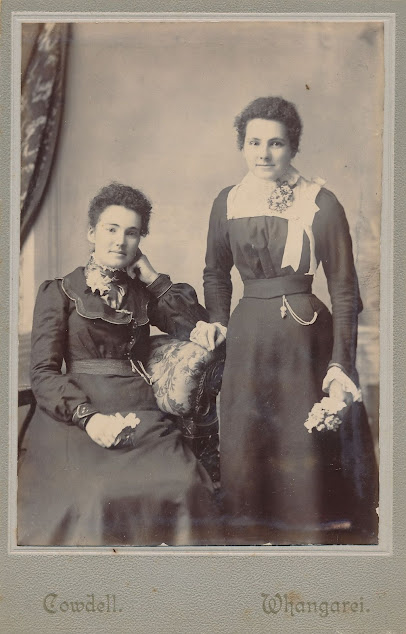 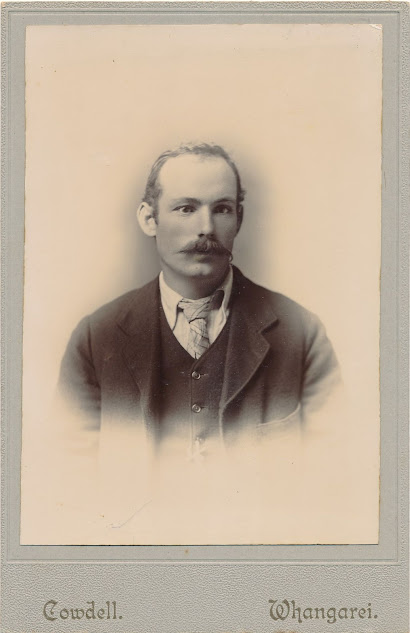 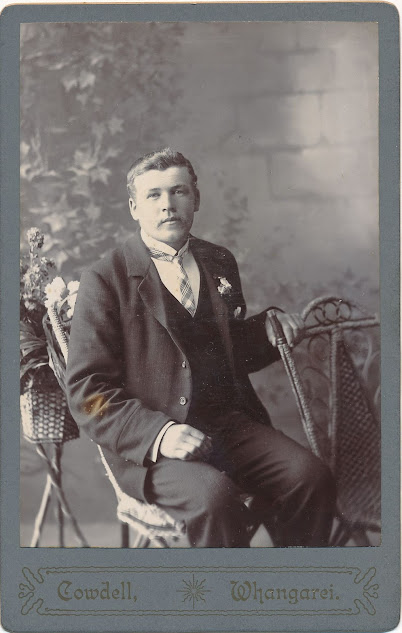 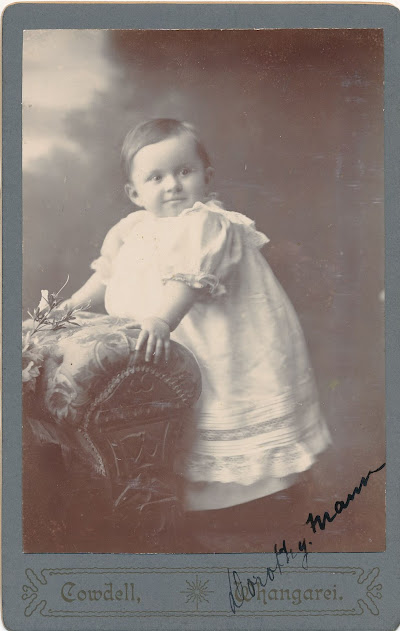 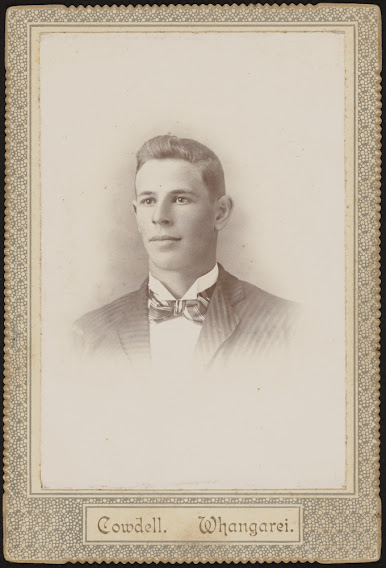 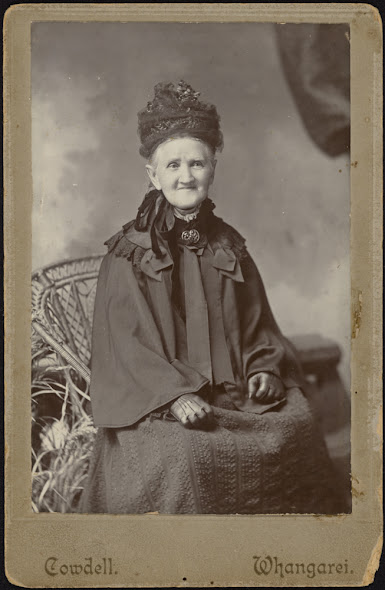 Auckland Libraries Heritage Collections 830-20
Posted by Early Canterbury Photography at 12:12 AM No comments: 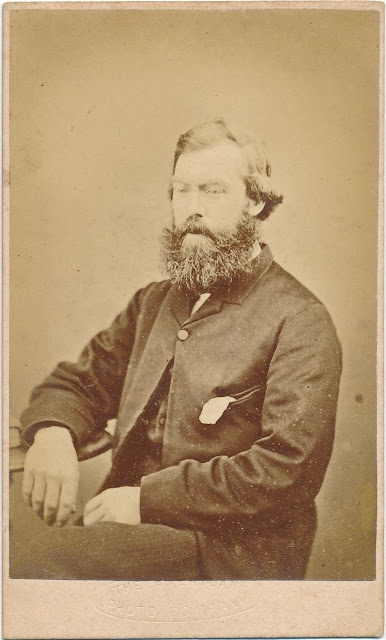 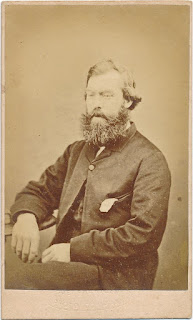 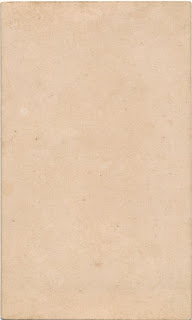 Posted by Early Canterbury Photography at 8:08 PM No comments: