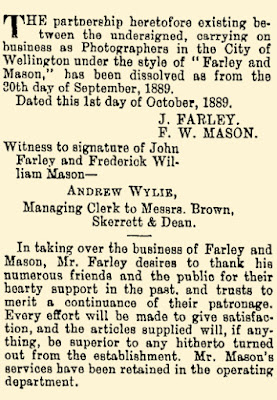 Meeting of Creditors.
A meeting of the creditors of John Farley, photographer, was held this morning, the Official Assignee in the chair.

The debtor submitted a written statement to the effect that owing to competition caused by a retired photographer recommencing business and by the opening of another studio below him in Cuba-street, coupled with bad weather and peremptory demands for settlement of claims, he had no recourse but to file in order to avoid seizure of plant and the incurring of further liabilities.

The falling off at the Lambton quay branch had been noticeable since before Christmas. The rent of that establishment being greater than that of the Cuba-street branch, he decided to close the former premises, but as he was unable to pay off Messrs. Warner, Kelly, and Adkin's claim for rent, and was thus prevented from taking away the plant, he was obliged to keep on both establishments in the hope that he would soon be able to close the Lambton quay studio.

The Official Assignee expressed the opinion  that it would be inadvisable to sell the plant at auction, as the articles would have to be sacrificed.

Mr. E. Mason, representing Mr. F. W. Mason, of Napier, the largest creditor, moved that tenders should be invited for the stock-in-trade.

The motion was seconded by Mr. Thomas Warnock, and agreed to.

Mr. Jellicoe, representing the debtor, explained that Mr. Archibald MacCurdy, who  figured amongst the creditors, had never been a partner of the bankrupt. Mr. MacCurdy at one time intended to join the debtor, but no money had been paid. Mr. MacCurdy's name appeared over the door in connection with Farley's, but he was never a partner in the legal sense.

On the motion of Mr. Mason, seconded by Mr. Warnock, it was resolved to recommend the immediate discharge of the debtor.
Evening Post, Volume XXXIX, Issue 123, 27 May 1890

Posted by Early Canterbury Photography at 9:32 PM No comments:

Posted by Early Canterbury Photography at 1:59 PM No comments: