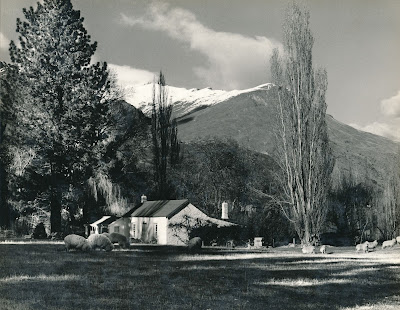 Posted by Early Canterbury Photography at 1:19 AM No comments:

Unknown Photographer
St Andrew's Presbyterian Church, Christchurch
The church was built from a modified design by the architect Henry John Cridland in the Gothic Revival style and was first opened for worship on 1 February 1857. 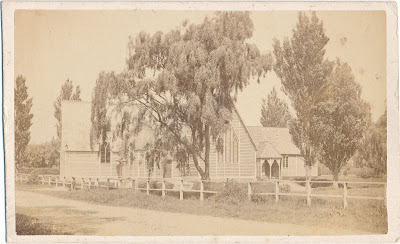 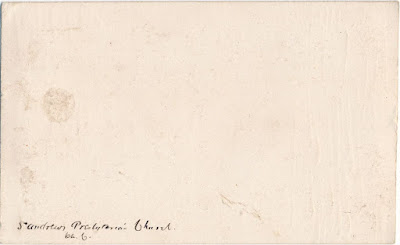 Three designs had been submitted by Mr Cridland, the architect, and the consideration of these was relegated to a building committee...By May, 1855, the committee had progressed sufficiently far to negotiate with the Peninsula sawmillers for the necessary timber to erect a church 54 x 22, with session house and entrance porch, some 11,000 feet being required, and the successful tenderers, Messrs Grubb and Marshall, who quoted 24s per 100 feet delivered at Christchurch Quay or the Ferry Road wharf... William Wilson gratuitously supplied the shrubs and trees for the church property. The original committee discussed at considerable length the question whether they should roof the new church with corrugated iron, but as they found the cost of iron would be much greater than shingles, it was resolved to use the latter...The new church name, St Andrew’s, was decided upon at a meeting held on December 23, 1856, and the completed church was opened on Sunday, February 1, 1857... The cost of erecting the church was £700 and the offertories on the opening day reached the magnificent total of £74 8s 6d, the largest collection on one day yet made in Canterbury. There was a debt of £150 owing upon the church when it was opened... Mr Cridland’s original plans were completed when in June, of 1859 it was resolved to erect the lining and interior fittings of the church, and it was then resolved that necessary enlargements should be made at the church, in order to secure extra accommodation for 120 more sittings, and in January, 1860, this contract was let to William Corbett for £595, church pews to be supplied at 24s and 57s each. In March of the same year William Corbett built the original Manse on the church property, his tender being £532.
During the seventy-five years of its existence St Andrew’s Church has had seven inducted Ministers, namely the Rev Charles Fraser, M.A., F.G.S., the Rev William Dinwiddie, B.A., L.L.B., the Rev Gordon Webster, M.A., the Rev John M’Kenzie, M.A., the Rev A. T. Thompson, M.A., B.D., the Rev R. M. Ryburn, M.A., the Rev Norman Webster, B.A., and the present minister, the Rev J. Lawson Robinson, B.A.
Star (Christchurch), Volume XLIV, Issue 127, 30 May 1931, Page 17 (Supplement)

Posted by Early Canterbury Photography at 10:26 PM No comments: