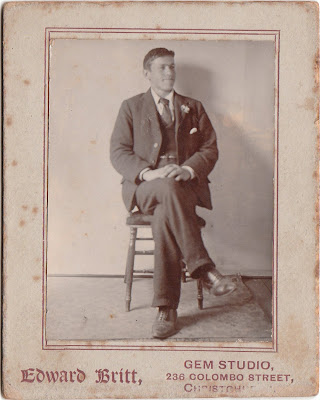 
MAGISTERIAL.
CHRISTCHURCH. Saturday, June 14.
Alleged Theft. — William Nelson was charged that, having, on Feb. 28, at Christchurch, received various sums of money in all amounting to £1 5s 6d, on terms requiring him to account for, and pay the same to Edward Britt, he did fraudulently omit to do so, thereby committing theft. Mr G. T. Weston appeared for the prosecutor. The accused, who was unrepresented, pleaded not guilty. The accused was employed by the informant as a canvasser for photographic enlargements. He received a nominal wage of 1s per week, and a commission of 2s on each order he obtained. He last had a settlement with the informant on Jan. 13, and since that time had obtained orders for which he had not accounted. It was stated that the informant recently received from the accused a package that had not been opened, and his Worship adjourned the case until Monday, in order that the package might be opened.

(Before Mr R. Beetham, S.M.) Theft of Moneys:— The charge against William Nelson of having stolen £1 5s 6d, the property of Edward Britt, was further investigated, Mr G. T. Weston appearing for the informant. Nelson was acting as a canvasser for the informant, and failed to account for moneys received by him for the informant. A parcel sent by the accused to his employer was opened and was found to contain no money, but simply orders. The accused had nothing to say, and was sentenced to fourteen days' imprisonment.

The Christchurch City Libraries have a photograph of the unveiling of the memorial statue of Queen Victoria in Victoria Square on Empire Day (25 May 1903) which shows the studio of Edward Britt in the background.

An inquest was held at the hospital yesterday afternoon by the District Coroner, Mr H. W. Bishop, on the body of Lizzie Alma Britt, aged five years, daughter of Mr Edward Britt, photographer, of George Street, New Brighton. Dr. Scott, medical superintendent, stated that the child had been brought to the hospital about ten o'clock the previous night, and it was stated that she had swallowed a brass paper clip. An attempt to remove the obstruction failed, but as the child seemed to be quite comfortable she was put to bed. About half-past twelve the child suddenly expired. Death was due to asphyxiation. Edward Britt, father of the child, stated that the little one had been playing in the bedroom. On the bed was a box containing two or three brass paper clips, and she evidently swallowed one. The Coroner returned a verdict that death was due to asphyxiation.