born circa 1843 Bishopsgate, Middlesex, England.
died 17 June 1921, Christchurch, New Zealand.
(father of Charles Alfred Winn a photographer in Christchurch and later in Temuka and Dunedin)
Benjamin Winn was the son of Thomas and Eliza Winn. His father was born in Bishopsgate, London about 1796 and his mother in St Luke, Middlesex about 1799. The 1851 census shows his father as a stationer and printer, living at 10 Sun Street in the London parish of St Botolph Bishopsgate. The 1861 census shows him at the same address, his occupation was then a stationer.

MEETING Of CREDITORS.
RE BENJAMIN WINN.
A meeting of creditors in the bankrupt estate of Benjamin Winn, photographer, Sydenham, was held at the Official Assignee's office this morning. Mr Bruges appeared for the debtor, and the petitioning creditor, Mr Thomas Richie, was represented by Mr Fisher. Mr Ritchie was the only unsecured creditor, the liability being £210. Besides this there was a debt of £100 to Mary Johnson, secured on certain property in Sydenham, the debtor's interest in which was put down as nil. Other assets consisted in £35 worth of furniture in excess of £25 allowed by the act. The debtor, in his sworn statement, said that he was a travelling photographer, and that his apparatus was destroyed by fire three years ago, since when he had been obliged to borrow apparatus from his son. He had made over the property in Sydenham to his wife for her lifetime, after which it reverted to him if he should outlive her.

About five years ago he joined and put considerable sums into a syndicate to take up and work a coal lease at Wairere, Glentunnel. This venture, the Wairere Coal Company, had turned out a failure, although up to the time it went into liquidation he had been led to believe that it was prospering. Mr Ritchie was one of the guarantors to the Bank of New Zealand for an overdraft of £500, and, being the only substantial man, had to pay it all. Mr Ritchie sued the debtor for his share, and then made him a bankrupt on it. The bankrupt was examined, by Mr Fisher at considerable length as to his connection with the Coal Company, and the moneys he had spent on it. According to his evidence, all he had and could raise for the last three years, had been put into the concern. The matter was finally left in the hands of the Assignee to make inquiries, and the meeting adjourned sine die.
Star, Issue 6464, 19 April 1899, Page 3
Marriage
Winn - Kearney.— At Barbadoes Street, by the Very Rev Father Le Menant Des Chesnais, S.M., Vicar-General, Charles Alfred, third son of Benjamin Winn, to Mary Ann, eldest daughter of the late Daniel Kearney, both of Sydenham.
Star, Issue 6670, 16 December 1899, Page 5
Benjamin Winn died 17 June 1921 aged 78 and was buried in the Sydenham Cemetery block 40C plot 60. He was then living at 22 Angus Street, Christchurch, his occupation was the na photographer. His wife Susannah died the previous year. 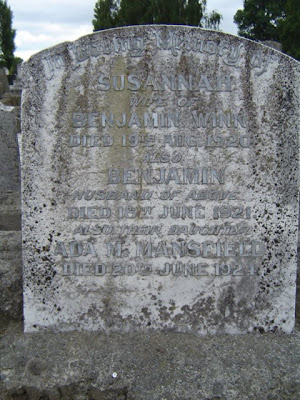