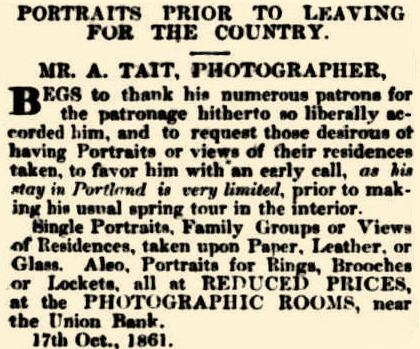 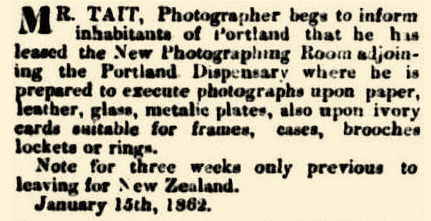 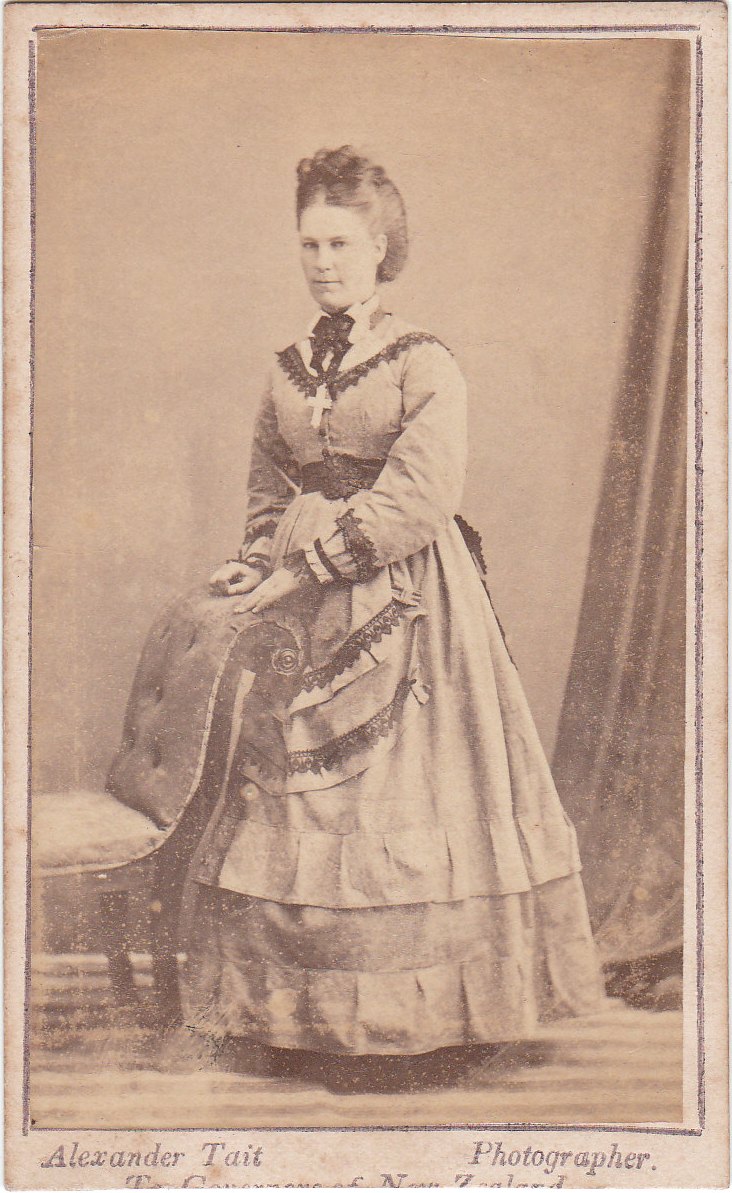 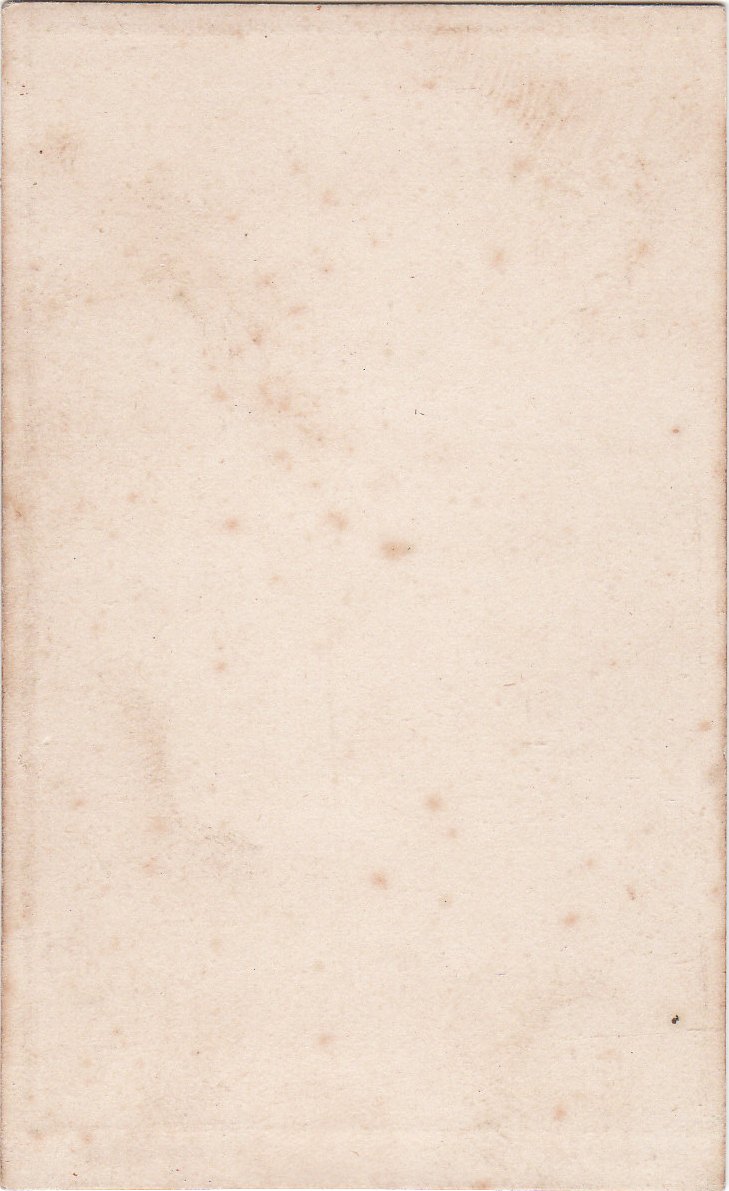 Mention has been made of the Governor [Sir James Fergusson, 1832-1907], during his visit to Greymouth, undergoing that painful or pleasant operation having his portrait taken. The portrait-taker, it should be added, was Mr Tait, and an excellent likeness and picture were the portraits — superior to any other portraits of the Governor that have yet been seen in these parts.
Grey River Argus, Volume XIV, Issue 1668, 9 December 1873, Page 2 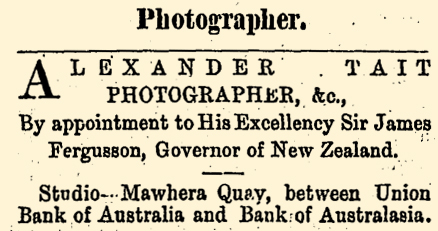 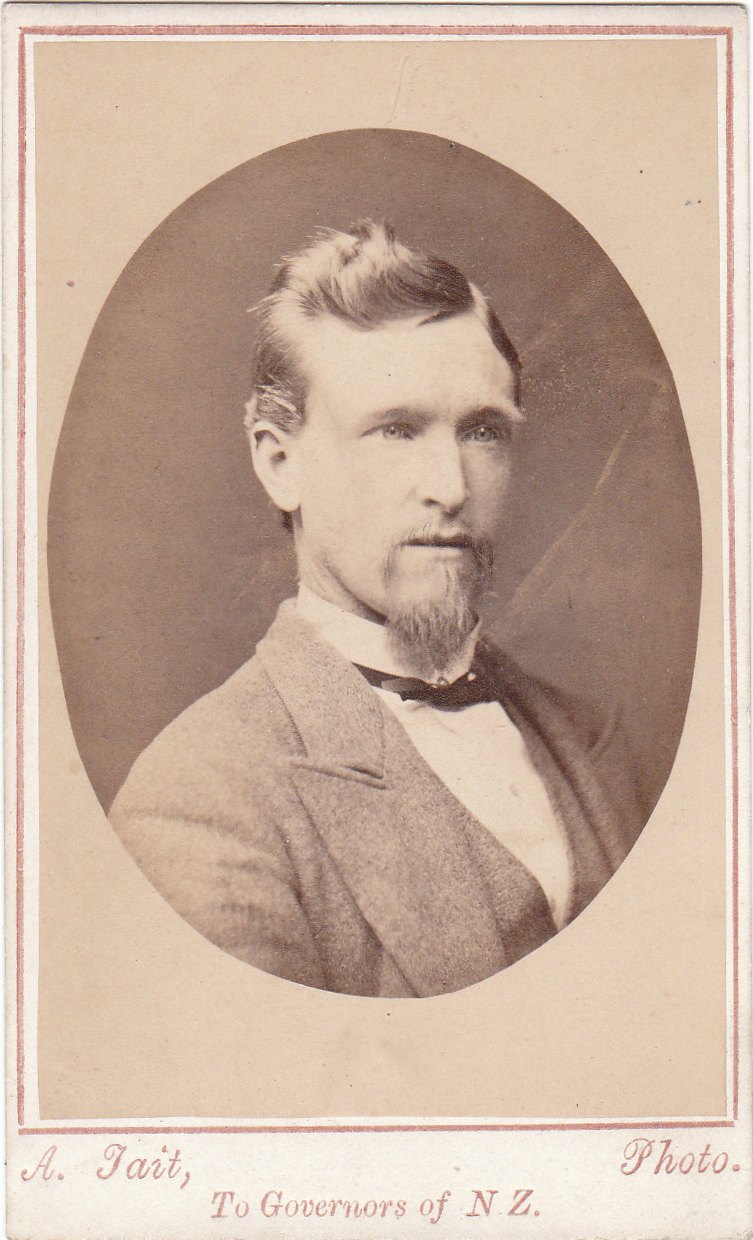 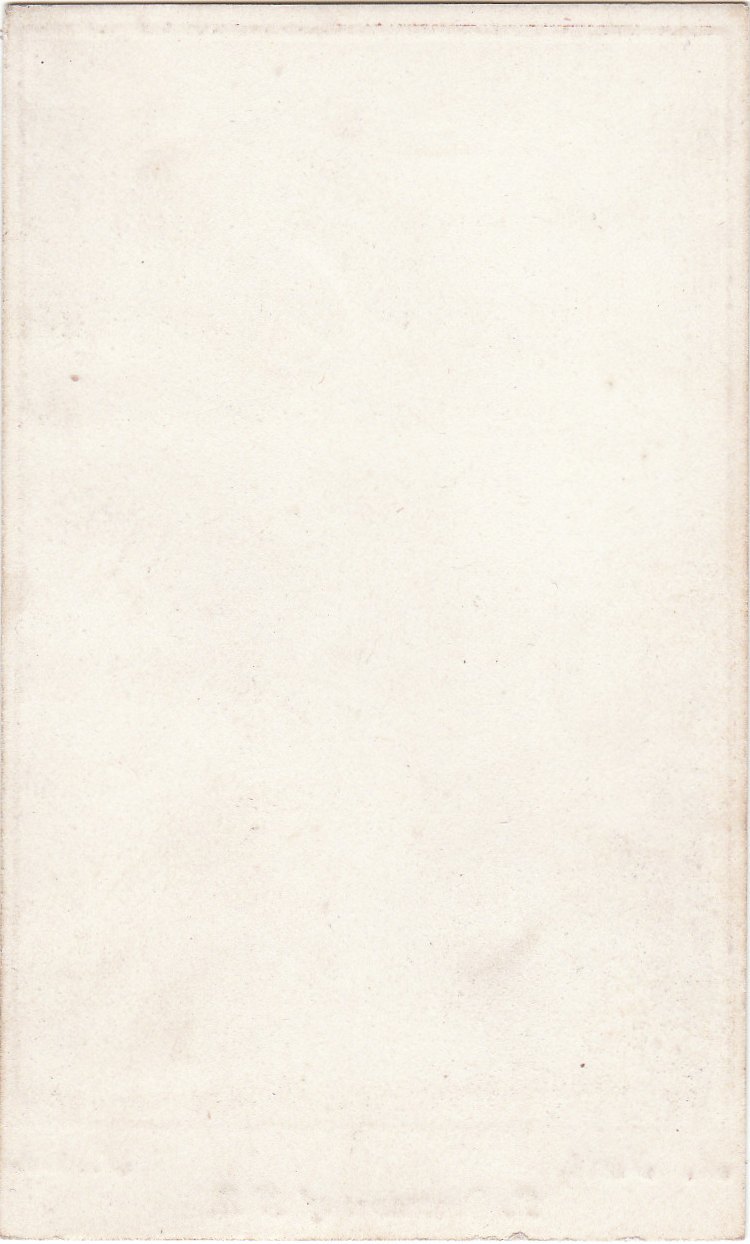 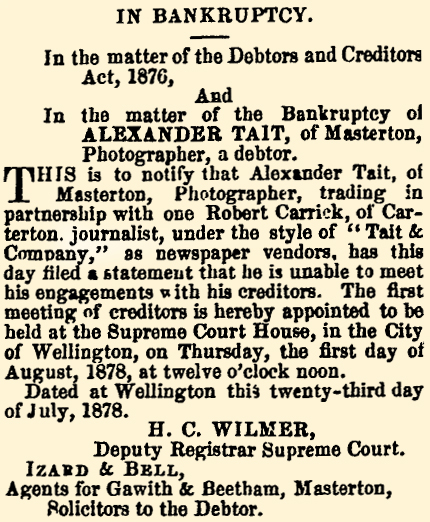 Two meetings of creditors were fixed to take place to-day one in the estate of Alexander Tait, of Masterton, photographer, and the other re William Cooper, of Karori, brick- maker. For want of a quorum, however, both meetings were adjourned till to-morrow.
Evening Post, Volume XVI, Issue 183, 2 August 1878, Page 2 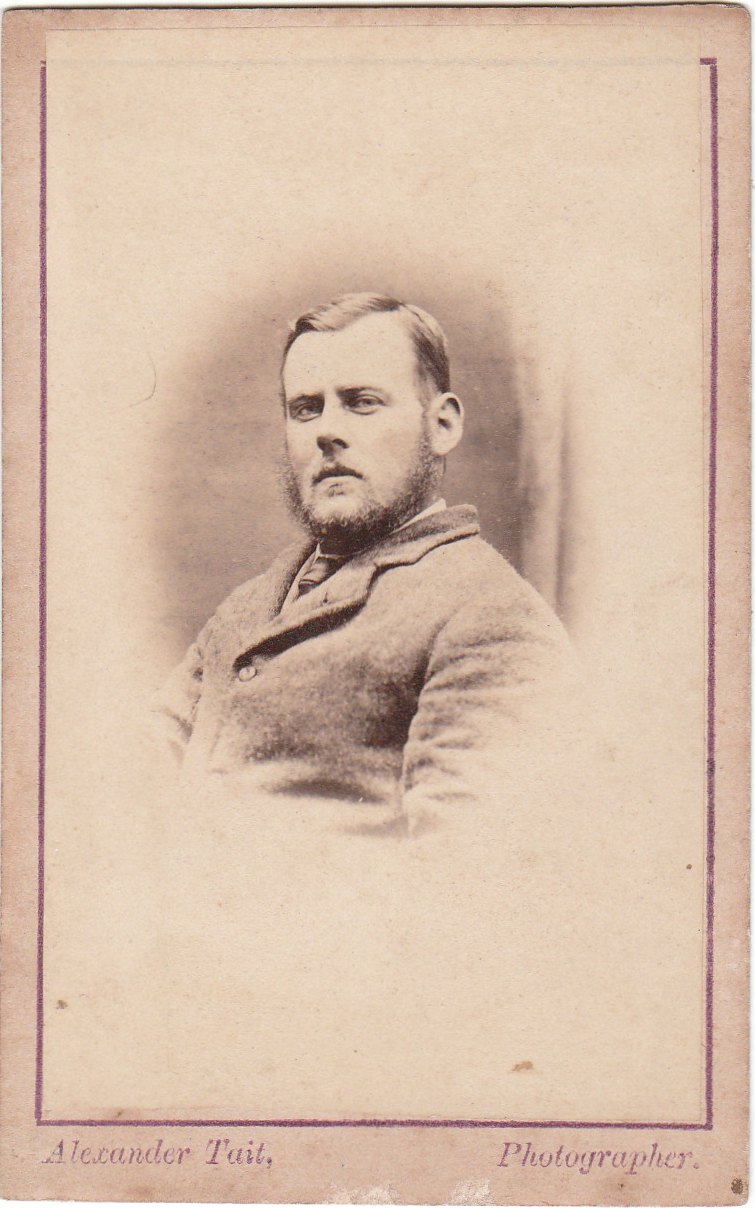 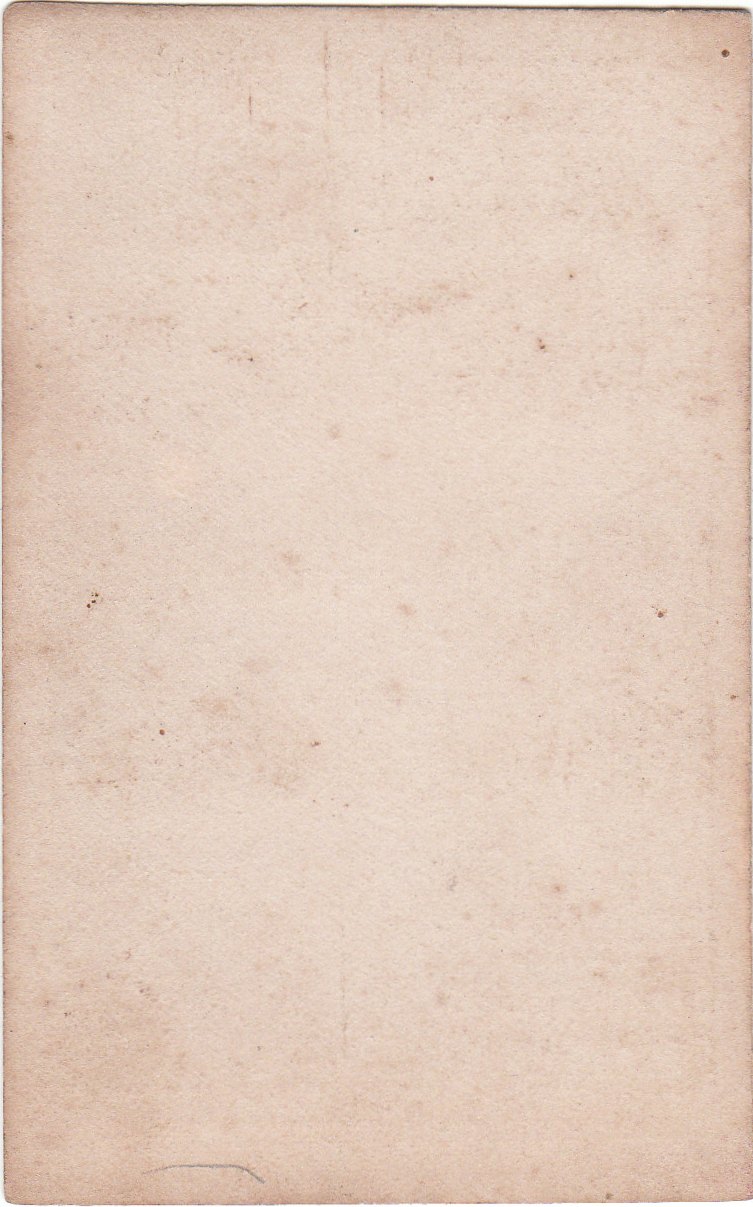 this photograph came with others from Wanganui and Marton so may have been taken by Alexander Tait while in that area. 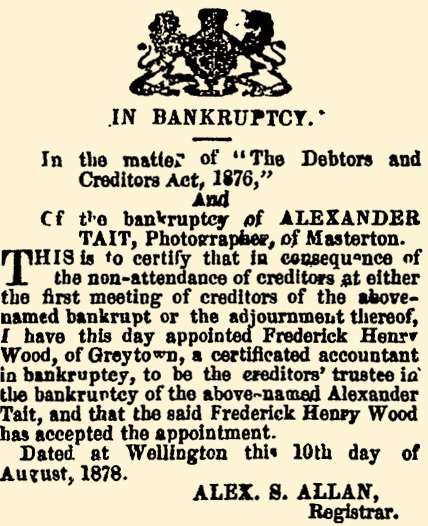 Photography seems to be quite a transitory business. There are two or three artists now in the district — a Mr Walker, from Christchurch [probably Charles F. Walker], and Mr Caney, who is assisted by his wife. The amount of work they are doing is another thing. I do not think they will receive much patronage, as money appears very scarce, and Tait, of Masterton, was here a short time back on the same venture.
Wairarapa Daily Times, Volume 2, Issue 115, 22 March 1879, Page 2 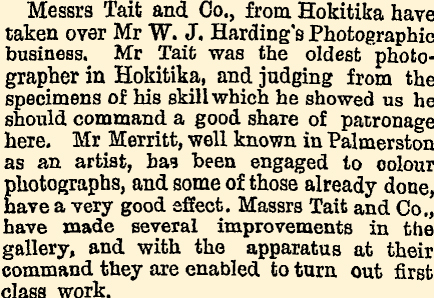 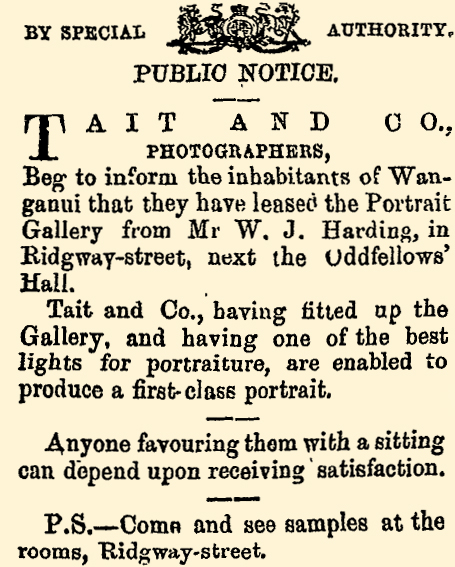 
In our notice on the 22nd inst., re Messrs Tait and Co., we should have stated that they have only taken over the portrait business, and Mr W J. Harding retains the architectural and landscape business in his own hands.


Messrs Tait and Co., photographers, of Ridgway Street, are now exhibiting some enlarged photos, coloured with life like tints, and handsomely mounted and framed. The portraits are excellent, while the general effect of the picture is equal to the best oil painting.


Mr Alexander Tait, the photographer, has arrived, and intends to open his studio in a day or two. His stay here will probably extend over the holidays, and as he is well-known as a first-class artist, the people of the district will have an opportunity afforded them of having a true, elegant, and well-finished portrait, taken by aid of the late improvements and innovations in the art.
Inangahua Times, Volume II, Issue II, 17 November 1880, Page 2 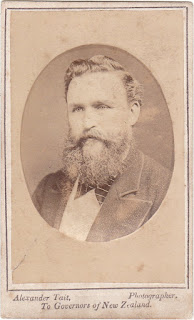 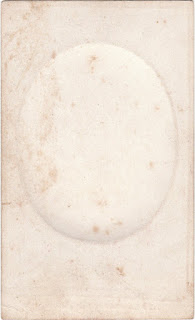 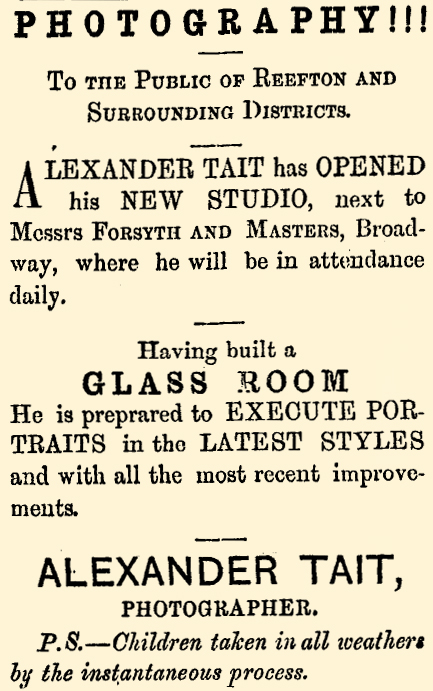 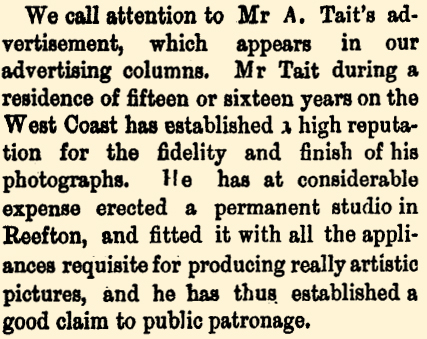 In June 1884 at fire in Reefton threatened Tait's photographic studio and the furniture and stock was removed. The fire also threatened the neighbouring business of Forsyth and Masters.
Inangahua Times, Volume IX, Issue 1411, 9 June 1884, Page 2 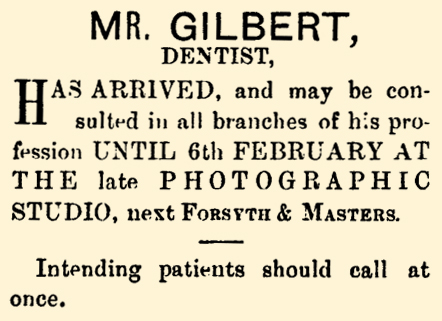 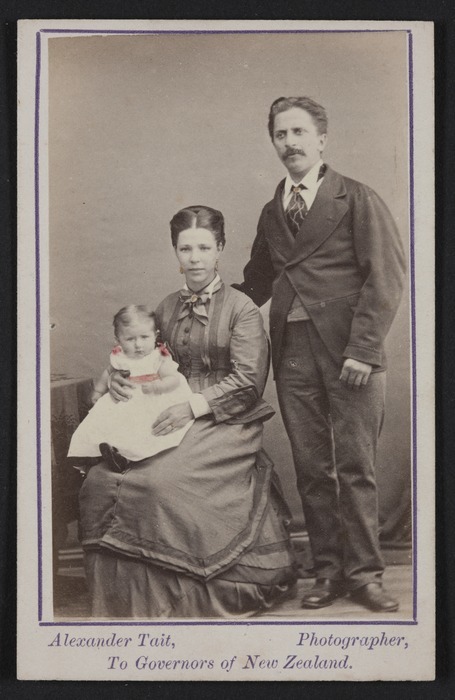 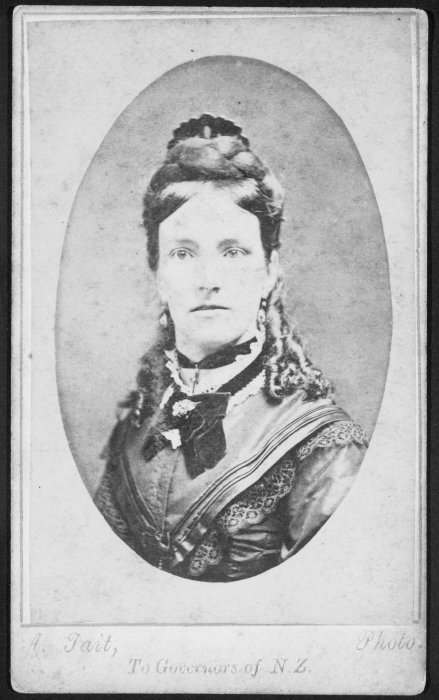 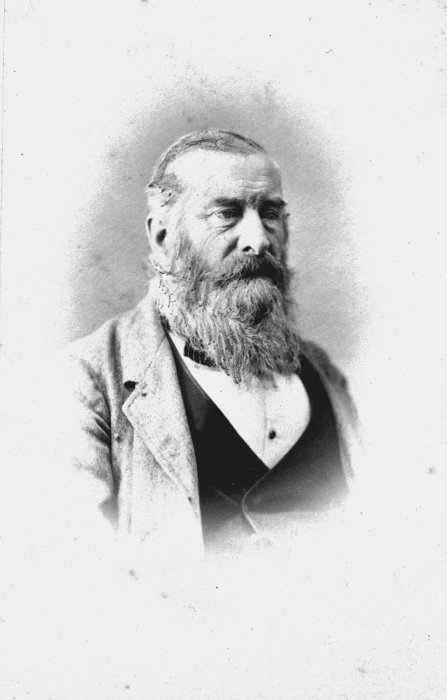 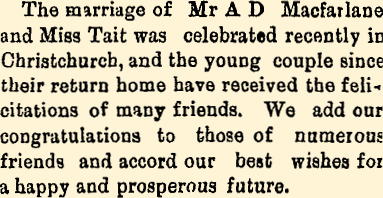 We have much pleasure in drawing the attention of our readers to the announcement by Miss Tait, of Hokitika, that she intends to take a limited number of pupils for singing in Greymouth, Miss Tait's qualifications are attended by the fact of having received from the Associated Board of the Royal College and Royal Academy of Music, London, their highest practical degree, (Licentiate of Associate Board). The certificate may be seen at Mr B Dixon's, Tainui Street. Miss Tait's pupils have taken the highest places at the practical examinations at Hokitika and also have distinguished themselves on the concert platform.
Grey River Argus, Volume 57, Issue 10520, 13 January 1903, Page 2

Mr Adam D. A. Macfarlane (late Chief Clerk of the State Forest Service) died at his home in Nelson on Saturday, the cause of his death being an abscess on the brain. The late Mr. Macfarlane was born in Hokitika in 1872 and was a son of the late Mr. Duncan Macfarlane at one time Stipendiary Magistrate of Westland. He was educated, in Westland and on leaving school was appointed as cadet in the Department of Lands and Survey in Hokitika. Later he was transferred to the office of this Department in Nelson, and for some years did Valuable work for the Department and the community generally. In 1917 he was transferred to the Public Trust Department, where he gave good service in the organisation of the branch office of the Department in Palmerston North. When the State Forest Department was created in 1920, Mr Macfarlane was appointed Chief Clerk, and did strenuous work assisting in the inauguration of the service up to the time of his illness a little over a week ago.

The late Mr. Macfarlane was a genial officer of the Civil Service, with which he was associated for 38 years, and made many friends throughout the Dominion. In his younger days he took great interest in football and other sports, and in music. He leaves a widow and one small daughter, who will have the sympathy of a wide circle of sincere friends.
Evening Post, Volume CIV, Issue 101, 26 October 1922, Page 6