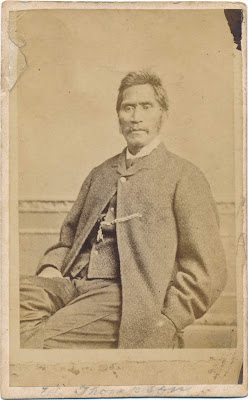 H.M.S.S. Esk, Captain Luce, from Auckland, arrived in harbor yesterday afternoon. On board of her was that celebrated Waikato chief Wi Tamihana (William Thompson,) accompanied by He Ta Turanga [Heta Tauranga - Wiremu Tāmihana's son-in-law], Porokuru Ngawihi, Homiora Te Hauroa, and Louis Deahars [Louis Dihars] the interpreter. Thompson has come down to visit his Excellency the Governor, and to submit certain propositions to the General Assembly.


H.M. s.s. Esk, J. P. Luce, commander, arrived in harbor yesterday afternoon. She left Auckland on the 11th, and proceeded to the Thames. On arriving at Keripehi, on the Piako River, she waited until the evening of the 15th July, when William Thompson (Wi Tamahana), Louis Deahars (interpreter), He ta Turanga, Porokuru Ngawihi, and Homiora te Hauroa embarked on board. She left at 9.25 p.m., and came down here under canvas. The passage was protracted in consequence of the constant southerly weather experienced.

William Thompson is passing his days very quietly. He has been very unwell, but is now getting better. A visit to the photographer and to the House are all that I have to record at present, except the Governor having got his elephant, seems sorely puzzled to know what to do with it; and his Excellency's advisers do not appear much to care about helping him out of his dilemma.

Photography. — The studio of Messrs. Swan & Wrigglesworth [the partnership between Swan and Wrigglesworth was dissolved in January 1866] is well worthy a visit at the present time, for among the various works of photographic art we observe pictures which must be pleasing to home friends.

Besides the excellent portraits of those members of the New Zealand Parliament who honored Mr. Wrigglesworth with a "sitting" during last session, we notice views of important places and portraits of "Maori nobility;" while likenesses, alike striking and faithful, of town celebrities abound in the well-stocked reception-room of this studio.


Foremost amongst the "nobility" we notice William Thompson — the king maker — an excellent picture displaying physiologically the characteristics of this great chief. Then again, there are groups of Maoris, the most striking of which is one formed by members of the retinue of Thompson, who were present in Wellington a few days ago. These Maoris have doffed the European costume, for the sake of effect, and show themselves in "fighting trim" and "eager for the fray."


In this first group there are three figures. Heta Tauranga, who is standing with a spear which he has evidently just drawn from the body of the prostrate Hamiora Te Ahuroa, while Porakoru Ngaurui is presenting a double barrelled gun at the fallen victim. The expression on the countenances of the actors in this scene is very telling, particularly that of Hamiora who, with pitying up-turned eyes, has seized the gun and appears imploring his assailants to leave their murderous work unfinished, while the stolid dog-like expression of the features of Heta, who apparently thinks he has done his part of the work, and is simply waiting for Porakoru to fire the fatal shot which shall quit them of their enemy, is very life-like.

The last figure is evidently relenting, and his face is marked by an expression of doubt, which must have inspired the victim with confidence. The manner in which these characters are "posed" is very artistic, while the picturesque back-ground lends additional attraction to the picture.


A Maori representing the "waiting for the fight," impersonated by William Thompson's son-in-law — the victim of the last group — displays to advantage the muscular form and warlike bearing of the New Zealand warrior. The only incongruity in this picture, to our mind, is a handkerchief worn round the neck of the chief, while the rest of his costume is purely Maori. Heta is the subject of another picture in which he is represented as an "out-post" watching, and waiting for the approach of the enemy. He is kneeling on the ground beside a stream of water, resting on a double-barrelled gun, while each nerve appears strained to the utmost to catch the first sound of the enemy's foot fall, or get a glimpse of the approaching form of the hateful pakeha.

Amongst other pictures we notice a number views of the principal places in and about Wellington, which are perfect gems in their way, and the price at which they are sold (1s. 6d. each) must commend them to parties wishing to inform their friends of the peculiarities of the Empire City of New Zealand.

Mr. Wrigglesworth introduces every new invention and discovery in tho science of photography, and evidently, taking a great pride in his profession, produces pictures which must give the utmost satisfaction to the "sitter," and always reflect the highest credit upon the artist.

Wiremu Tamihana
...The Waikato chiefs were dissatisfied with the first, working out of the Treaty of Waitangi. They feared that the pakehas would acquire all their lands, and to oppose this, danger Wiremu Tamihana, (William Thompson), the son of the famous Te Waharoa, was the leader of the movement to unite the tribes under a single king.

In 1863, following a conflict over land claims in Taranaki, war spread to the Waikato, though Tamihana had striven hard for peace. In his fascinating story ‘The Greenstone Door’ Mr William Satchell gives a picture of “the kingmaker.”

“The son of Te Waharoa was seated, a large Bible open before him.

“If you would, know what this man, the best and greatest of his race — was like, in appearance, conceive an Irish peasant tanned to a rich bronze, with shock black hair and heavy, nearly-meeting eyebrows, and he is before you. There was nothing about him to suggest his savage ancestry. His face was without tattooing, his forehead high and well developed, his brilliant dark eyes were full of kindliness and intelligence. Only in the prominence of the cheekbones and a slight distension of the nostrils did the Maori reveal itself. ....

“The man who truly represented the Maori nation during that stormy time, who stood for all that is best in his race, and who mentally and morally could compare not unfavourably with his civilised opponents, was Wiremu Tamihana, chief of the Ngatihaua... On him it was that, when the struggle came, the eyes alike of Maori and European were turned. In strong contrast to his dominant father, he was not a fighting man. Bloodshed and any form of violence were averse from his nature. A love of justice was ingrained in him. Deeply religious, honourable, chivalrous, he commanded the respect and goodwill of everyone with whom he came in contact, and no stronger argument of the justice of the cause he espoused is to be found than the fact that he did espouse it — in words while words availed, and in action when the hour for talk had gone by.”


Posted by Early Canterbury Photography at 10:45 AM