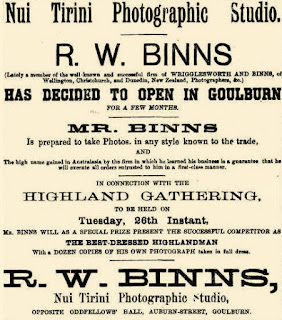 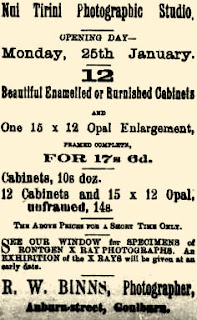 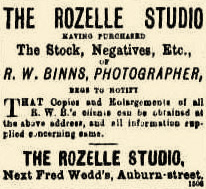 Operator and Manager
Wrigglesworth and Binns
Dunedin
from about 1903 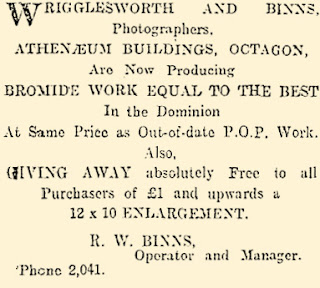 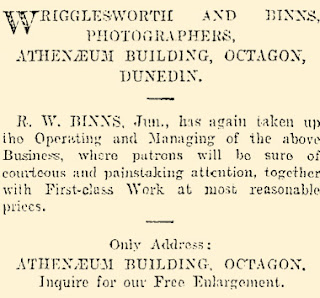 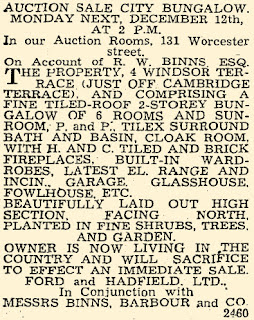 Reginald William (R.W.) Binns, a son of Frederick Charles Binns, was a photographer from Christchurch, NZ who had an Australian connection. He announced the opening "for a few months" of his Nui Tirini Photographic Studio about Australia Day (26th January) 1897 in Goulburn, NSW. Nui Tirini stood opposite the Oddfellows Hall (now Argyle Mall) in Auburn Street. The last mention of him in the local newspaper, the Goulburn Penny Post is in August 1898, and a competitor, the Rozelle Studio announced in December that they had bought all his stock. Also during his brief time in Goulburn (c. 20 to 24 months) he patented a new photographic process http://nla.gov.au/nla.news-article108054166.

R.W. Binns appears to have returned to Christchurch, which was maybe his original intention. Is there any more information on this photographer?
Posted by Early Canterbury Photography at 2:13 PM