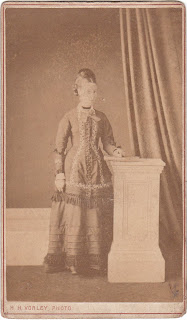 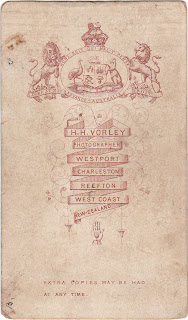 Newspaper references
A hailstorm at Westport on Monday week was the most severe one occurring in the district for years past. The hailstones were the size of gravel stones, and did much damage to garden crops. Gooseberry brushes and peach trees were stripped of their bearing, and flowers and shrubs denuded of their fairest blossoms. Several skylights were broken, and at Mr Vorley's photographic studio the glass roof suffered much damage. - West Coast Times, Issue 3179, 13 December 1875, Page 2A Rink Proprietor in Trouble. — In the District Court, Westport, recently, say an exchange, one Vorley, a photographer, sued the proprietor of a skating rink for damages for injury done to his business and health through the noise made by the rinkers. Judgment has been given at considerable length by Judge Weston, which concludes as follows: — " In this case I conceive that the defendant must be answerable for those who at his invitation, with his sanction and in his sight, embarked in a game one of the consequences of which would be a noise in a greater or less degree, and from which the plaintiff has, it appears, suffered. The plaintiff's health became impaired through the nuisance, he was subjected to some expense, though the amount was not ascertained, and taking all the circumstances into consideration, I shall give a verdict for him with £10 10s damages. Judgment accordingly, with costs of suit, £15 11s." - Timaru Herald, Volume XXV, Issue 1563, 31 October 1876, Page 3
above - Inangahua Times, 1 January 1877, Page 3
(Papers Past - National Library of New Zealand)

above - Inangahua Times, 2 February 1877, Page 3
(Papers Past - National Library of New Zealand)
Mr Vorley advertises in todays issue that his studio (Reefton branch) will be closed on the 20th instant. - Inangahua Times, Volume III, Issue 83, 12 March 1877, Page 2Owing to ill health Mr Vorley, photographer, has decided to close his studio, in Broadway, for a few days. Mr Vorley will probably re-open his, studio for a week before leaving Reefton, of which due notice will be given.Inangahua Times, Volume III, Issue 89, 14 March 1877, Page 2With the warm rains of Friday and Saturday, the last of the snow disappeared, and the town and surroundings are very much better for the cleansing and deodorising occasioned by the fall. Mr Lock, of Vorley's photographic studio, Broadway, has been fortunate enough to "secure a shadow ere the substance faded," and the result is a very pretty picture representing the upper portion of Broadway under a foot of snow. The picture faithfully depicts the scene, and though the light was not of the best, the faces and forms of several well known, but very naughty citizens are readily recognisable hotly engaged as they were at the time, in the healthful pursuit of snowballing. The view ought to command an extensive sale.Inangahua Times, 12 August 1878, Page 2Mr Vorley, an old West Coast photographer, long and favorably known at Charleston, Westport, and Reefton, the other morning awoke to find himself famously rich. He received at Westport a direct cablegram from London, apprising him that through the death of a near relative he had succeeded to an extensive property. We congratulate Mr Vorley upon his good fortune, and trust that he will live long to enjoy it. He proceeds to Europe by the next outward mail steamer. The legacy is worth about £3000 per annum.West Coast Times, Issue 3055, 18 January 1879, Page 2 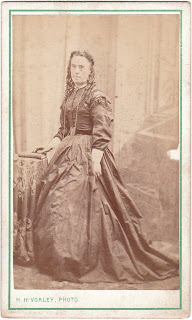 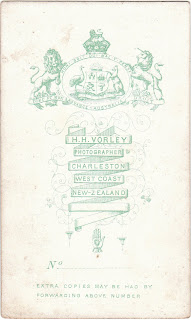 New Zealanders will regret to hear of the death of Mrs. Archibald Campbell Williams, who, before her marriage was Miss Beatrice Mary Maude Vorley, daughter of tho late Mr. Herbert Vorley, of Westport, New Zealand. She passed away on the 6th inst at St. Wilfrid's Caroline-road, Moseley, near Birmingham, in the 41st year of her age. - Evening Post, Volume LXXXI, Issue 120, 23 May 1911, Page 3Webb's, New Zealand - 2008Lot 288 : Photographs: 11 Cartes de Visite, variousDescription: 11 Cartes de Visite, various photographers, along with an In Memoriam card in the name of Herbert Henry Vorley, late of Westport, New Zealand. 19thC. Various photographers, gelatin silver prints. Subjects mostly children. One carte annotated verso 'Darling Ada Born at Charleston New Zealand in the 27th Jany. 1867 for my dear Mother from H H V'. 1 dup. [12]. G+.Wise's Directory for 1878-79 Vorley, H. H., Palmerston street, Westport, NelsonHenry Lock may have purchased Vorley's studio in Palmerston Street, Westport as he is shown at this address in the next issue of Wises Directory.

Very interesting, especially to discover his early history and what becameof him after leaving the West Coast. You'll find an example of his work, and alittle more information, in Photo-Sleuth article here.

Also in the household is Margaret Trapper (or Trappes), a widow aged 55 and born in Adelaide, South Australia, shown as mother-in-law to the Head of Household, i.e. English. I believe this must be the photographer H.H. Vorley's widow who must have remarried someone by the name of Trapper/Trappes.