Worked for Peter Schourup from about 1883 until Schourup's death in 1887, later for Eden George and in 1890 was working for Robert Walter Meers.


Volunteering
The Committee of the Boxing Day Volunteer Rifle Competition have much pleasure in acknowledging, on behalf of the Volunteers, the receipt of the undermentioned Prizes given by the Tradesmen and Merchants of Christchurch:—
...Vol. Talputt (sic) 1/4 doz. silk scarfs - N.Z. Tweed Company ...


The Hillsborough Camp. — We have received a set of photographs of the recent Volunteer Encampment at Hillsborough, taken by Sergeant Tolputt, of the Irish Rifles, and printed by Mr E. W. Meers [sic]. They consist of a general view of the camp, a parade of the infantry companies, the Engineers' flying bridge over the Heathcote river, and the camp kitchen of the Irish Rifles. All are good pictures, and the set forms an interesting memento of the Easter Encampment of 1890.

Artistic.— There is now on view at the studio of Mr Tolputt, Manchester street [Christchurch], some very excellent specimens of opalette photography. By this process the pictures are produced with a beautifully soft appearance, whilst all the sharpness and life of an ordinary photograph is preserved. Mr Tolputt has also some very pretty carbon photographs on china, &c., which are well worth seeing.
Press, Volume XLVIII, Issue 8016, 10 November 1891 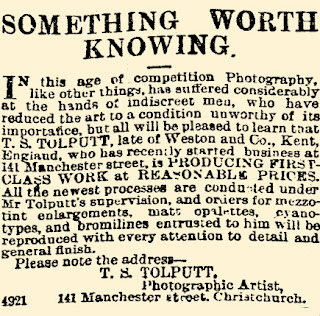 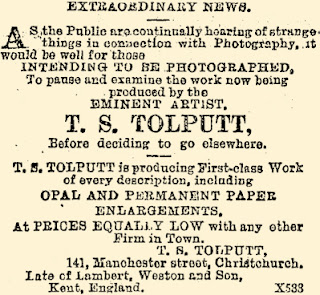 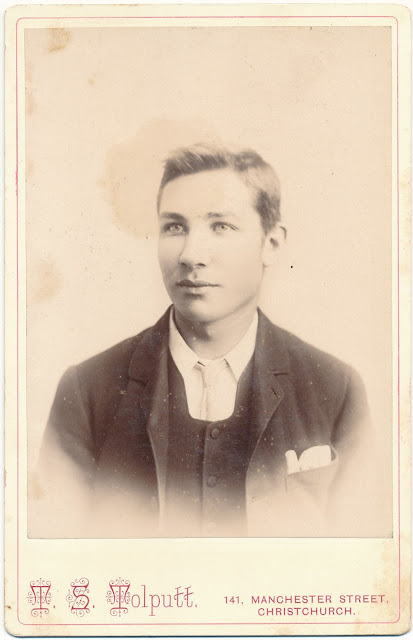 
Tolputt, T. S., Photographer, North Canterbury Studio, Rangiora. This studio was established in 1895, and has been carried on up to the present time. The premises are built of wood, and have a large showroom in front with workrooms behind, and the studio and waiting-rooms upstairs. Mr. Tolputt undertakes every description of photographic work, including enlargements, and all up-to-date styles of portraiture.

He served an apprenticeship in England, with the firm of Lambert Weston and Son (photographers to the Queen), Kent. In 1883 he came to New Zealand, and was in Christchurch for ten years, four of which were spent in the employment of the late Mr. P. Schourup. 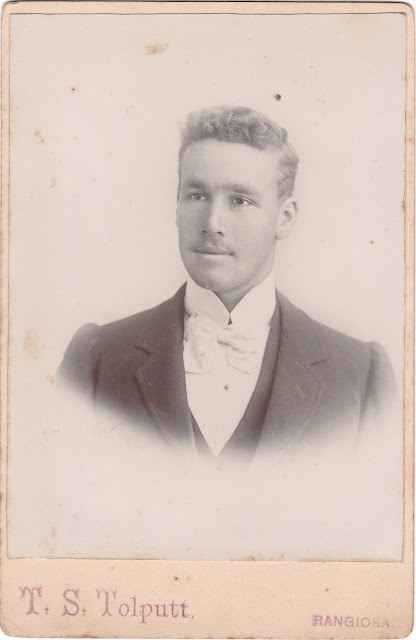 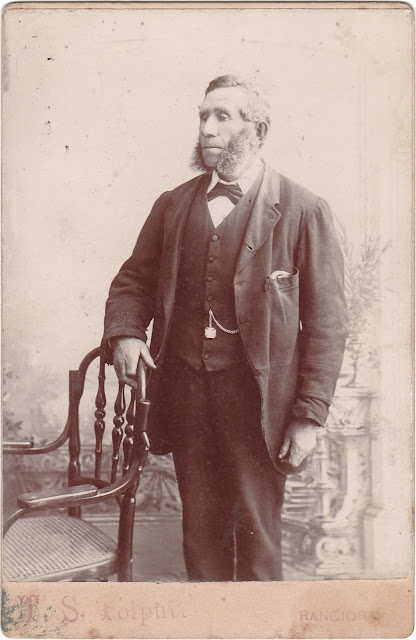 can you give me any info e.g year in business,arrival in nz or any other. my grandmother was kate Sankey,hastingleigh ,kent,a relation to Thomas, his mothers maiden name was Sankey.many thanks,david bell-booth.kate came to nz with her family in 1862.