In 1917 he worked at Peterson's Ltd in Christchurch as a jeweller's salesman; he lived at 46 Slater Street, Richmond (2).

E. E. Wiltshire was an ardent colour enthusiast in the days of Dufaycolor, and a meticulous monochrome print maker. He is commemorated by the Wiltshire Cup, the much sought-after trophy for a major interclub colour competition (5). This cup is now awarded to the Photographic Society of NZ club submitting the best selection of eight digital images, on any subject (6). 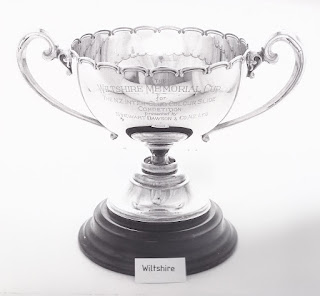 Petersens old-established jewellery business, 66 years in existence, and an important part of the City's business life, has now been reorganised, the two principals taking an active part in the business: Mr J. A. Robb, the well-known Christchurch jeweler, who recently returned from an extended trip to England, and Mr E. E. Wiltshire, 14 years associated with Petersens, latterly as manager. 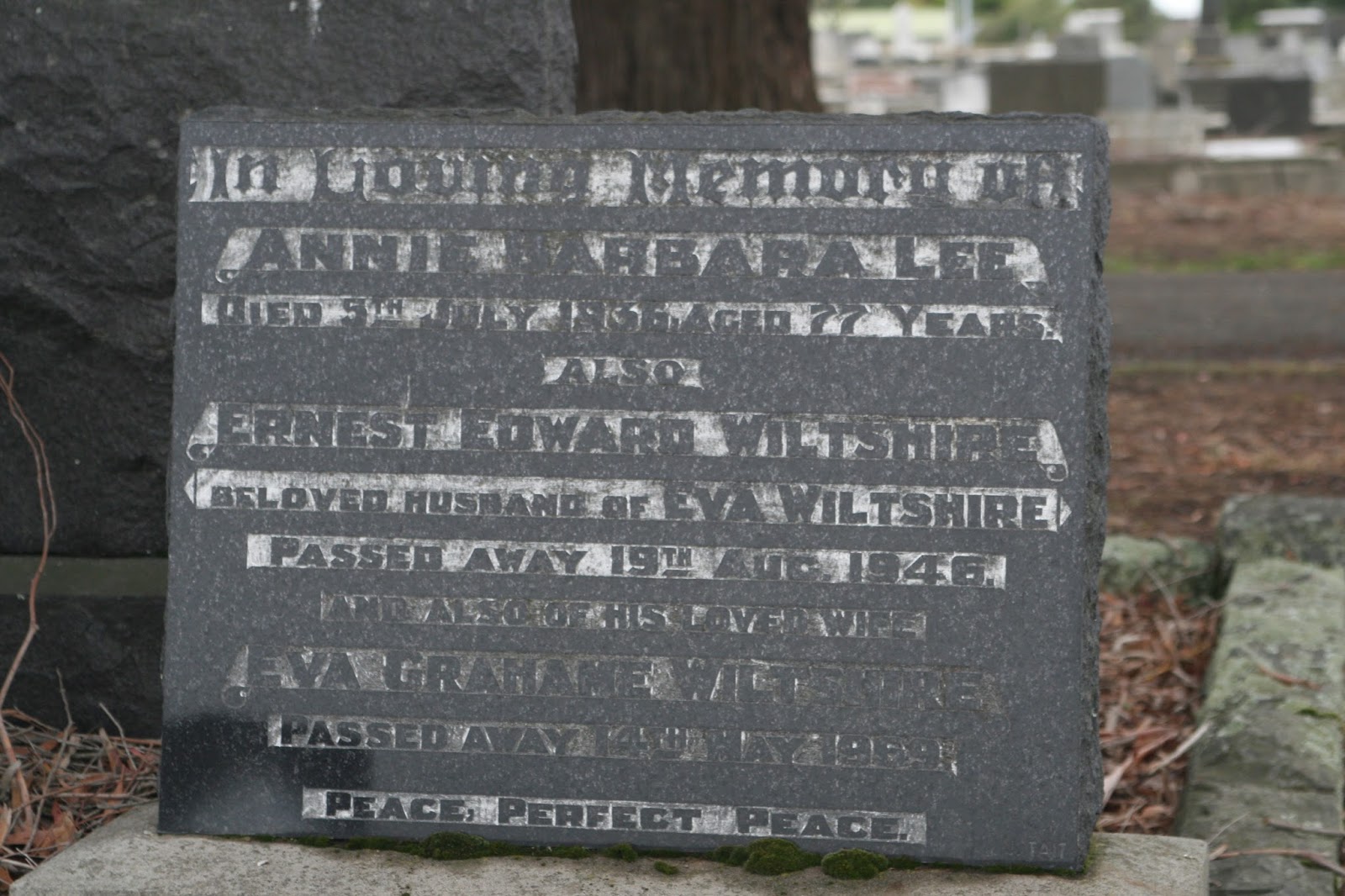 The grave at Bromley Cemetery, Christchurch of Ernest Edward Wiltshire and his wife Eva Grahame Wiltshire nee Higgs. This is also the grave of Annie Barbara Bell, the mother of Eva Grahame Wiltshire who died 5 July 1936 age 77 years. Following the death of her first husband Frederic Higgs she married in 1893 to George Lee. Annie arrived in New Zealand in 1911 (4) so she probably arrived with Ernest and Eva Wiltshire.
photographed 11 April 2015 AGR

Mr Ernest Edward Wiltshire, who died suddenly at his home yesterday, was born in Kent (8), England, 62 years ago and came to New Zealand in 1911. More than 30 years ago he joined the firm of Petersens Ltd, jewellers, as a salesman. Later he became assistant manager, then manager, and in 1929 he was appointed a director of the firm. In 1930 he was appointed a Justice of the Peace. He had presided at a number of sittings at the Magistrate's Court.

Keenly interested in horticulture, Mr Wiltshire was for more than 30 years a member of the Canterbury Horticultural Society. For several years he served on the committee of the society, and he was also a life member and vice-president. Mr Wiltshire specialised in showing gladioli and won several awards at Dominion shows, in addition to many prizes at Canterbury shows. He also exhibited in other classes at Christchurch shows. During recent years Mr Wiltshire experimented with a number of varieties of plants and had been successful in grafting a new type of apple which he intended to exhibit at shows during the coming year. Mr Wiltshire also judged in the gladioli section at many horticultural shows.

Another of his hobbies was photography. He specialised in colour transparencies and landscape shots and had a fine collection of colour slides of Christchurch and of the Mount Cook region. The collection of Mount Cook slides was said to be one of the best in New Zealand. He exhibited in many photographic competitions in the Dominion and had broadcast commentaries on Bledisloe Cup competitions when they were held in Christchurch. He was a member of the Christchurch Photographic Society. In recent years he had exhibited some of his work in the United States and had won high praise for it.

A former president of the Linwood Library, and a member for about 25 years, Mr Wiltshire was secretary of the library up to the time of his death.
Press, 20 August 1946, page 8.

On the morning of the 19th August, Mr. E. E. Wiltshire "passed away". Suddenly. Unexpectedly.

Mr. Wiltshire was one of the Society's keenest and most useful members, and his death has created a deep sense of sadness amongst all who knew him.

Joining the Society in 1939 he quickly established himself as our best colour worker and in a short time, he became a committee member and the following year, a Vice-President. He occupied this office at the time of his decease.

During the war colour film became very scarce so Mr. Wiltshire directed his energies towards monochrome work. In this field he was also a superb worker, among his outstanding pictures were "Enter Spring", "Salute to Spring" and "Magic Carpet". All Inter-Club Competition pictures.

Mr. Wiltshire's large circle of contacts in the business world proved invaluable in assisting the Society to expand and his annual broadcasts on the Air when the Bledisloe Cup Competition was shown in this city, were listened to by photographers all over New Zealand.

Mr. Wiltshire endeared himself to those in close contact with him by his eagerness to help, advise and demonstrate. It was obvious that his greatest pleasure lay in giving help to others. It was almost impossible to repay him, and that condition seemed to be entirely satisfactory to him.

As Editor of the "Highlight" he was outstanding; and he took great delight in polishing up each issue and making it sparkle with wit.

Apart from the joy in helping those about him, Mr. Wiltshire was never so happy as when out with his cameras, (colour and monochrome) making pictures of those beautiful things in Nature. Flowers, Trees, Streams, Sunlight, Shadows, and the Clouds in the Sky. It is amongst these beautiful thing we say Good-bye to our Friend.

We deeply mourn his loss. We have greatly profited by his example.
F.L.B. [by Frederick Leslie Bowron]. 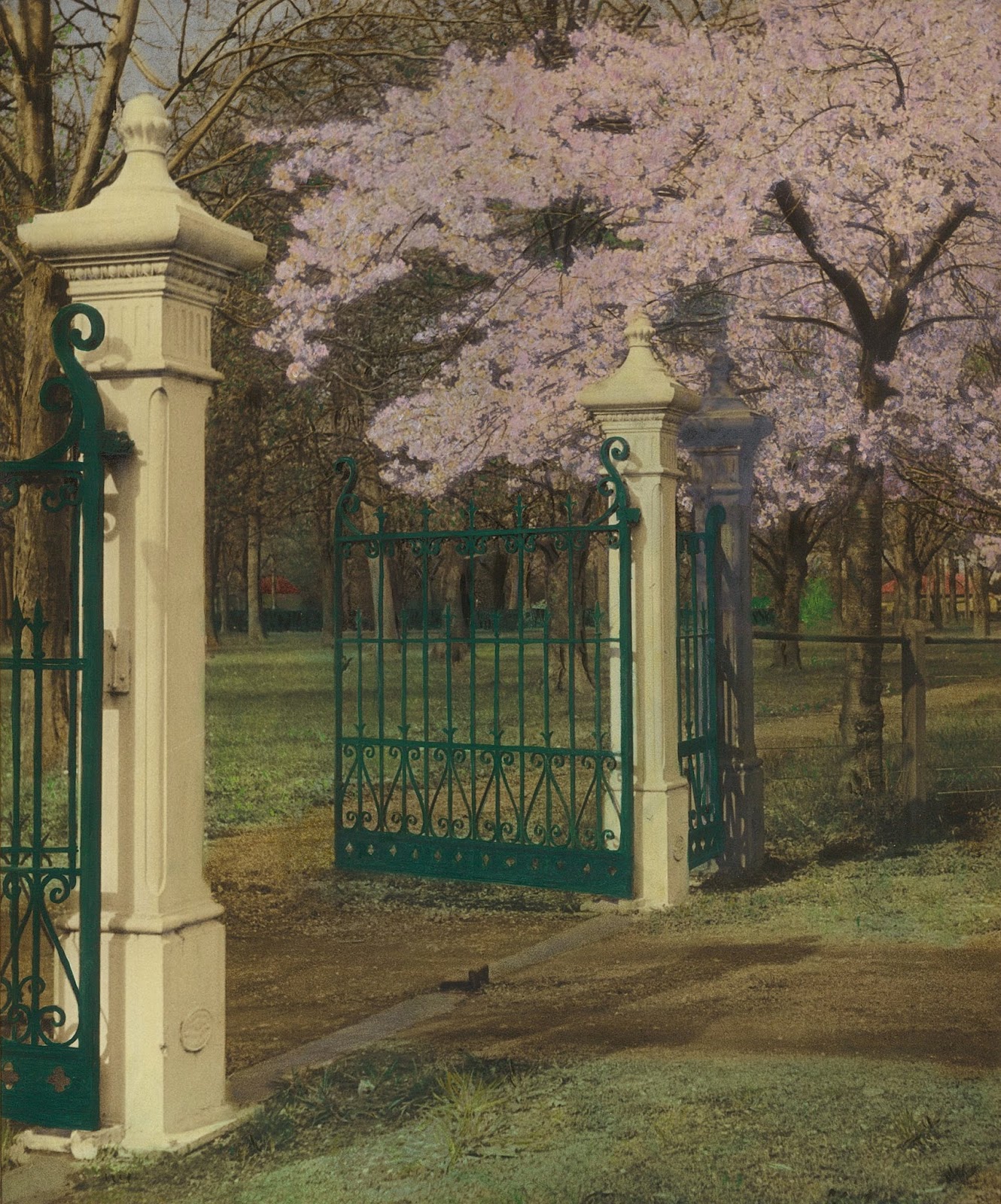 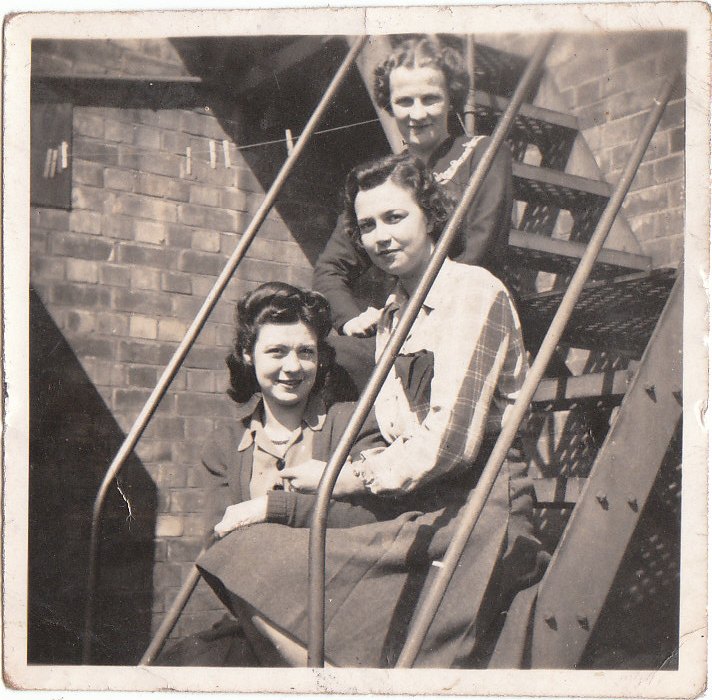 Isabella McArthur is shown here sitting at the bottom of the stairs; this photograph is dated September 1943. She was born 6 September 1927, married Victor Malcolm Alexander MacNaughtan in 1948 (7) and died in 1999. 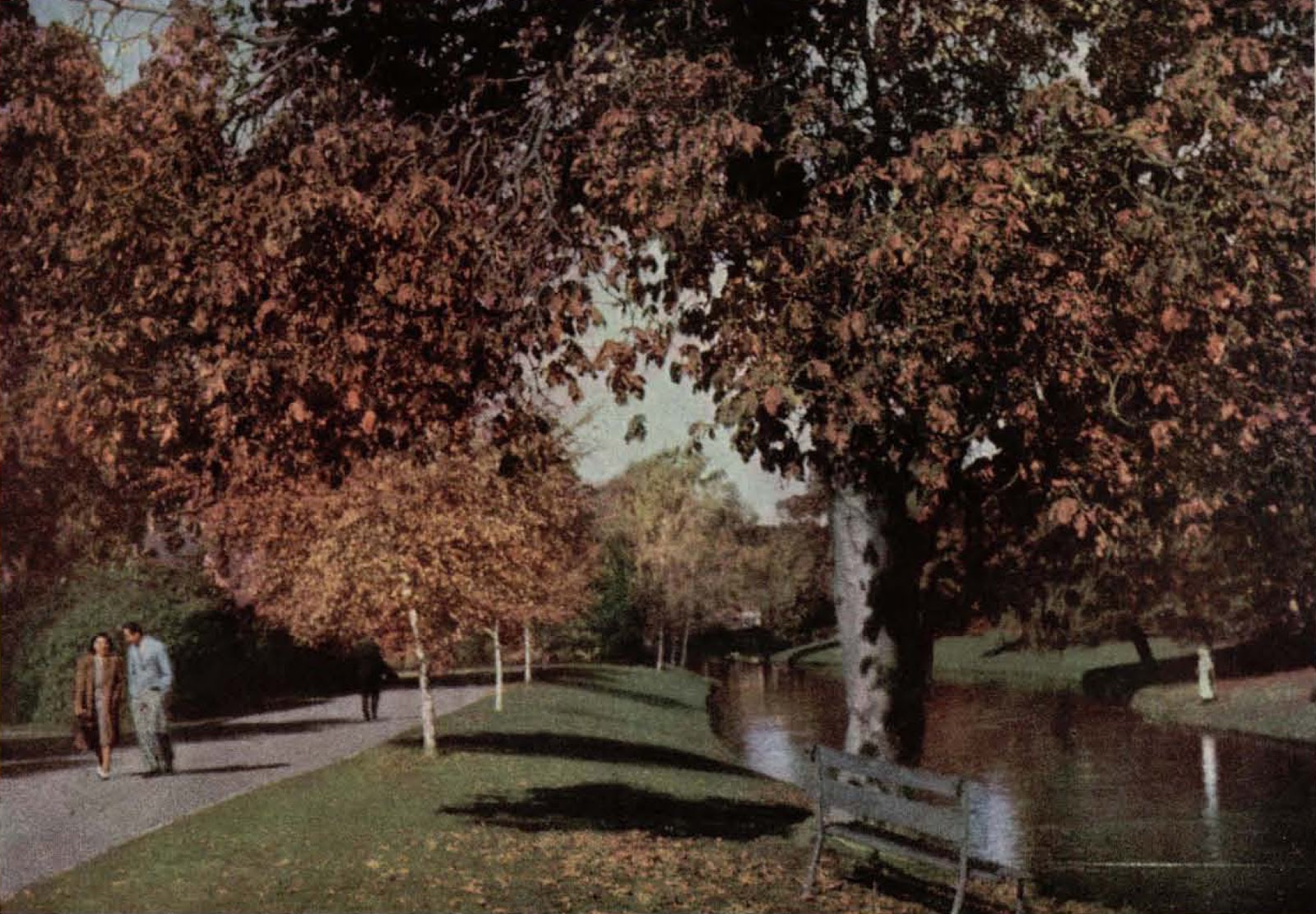 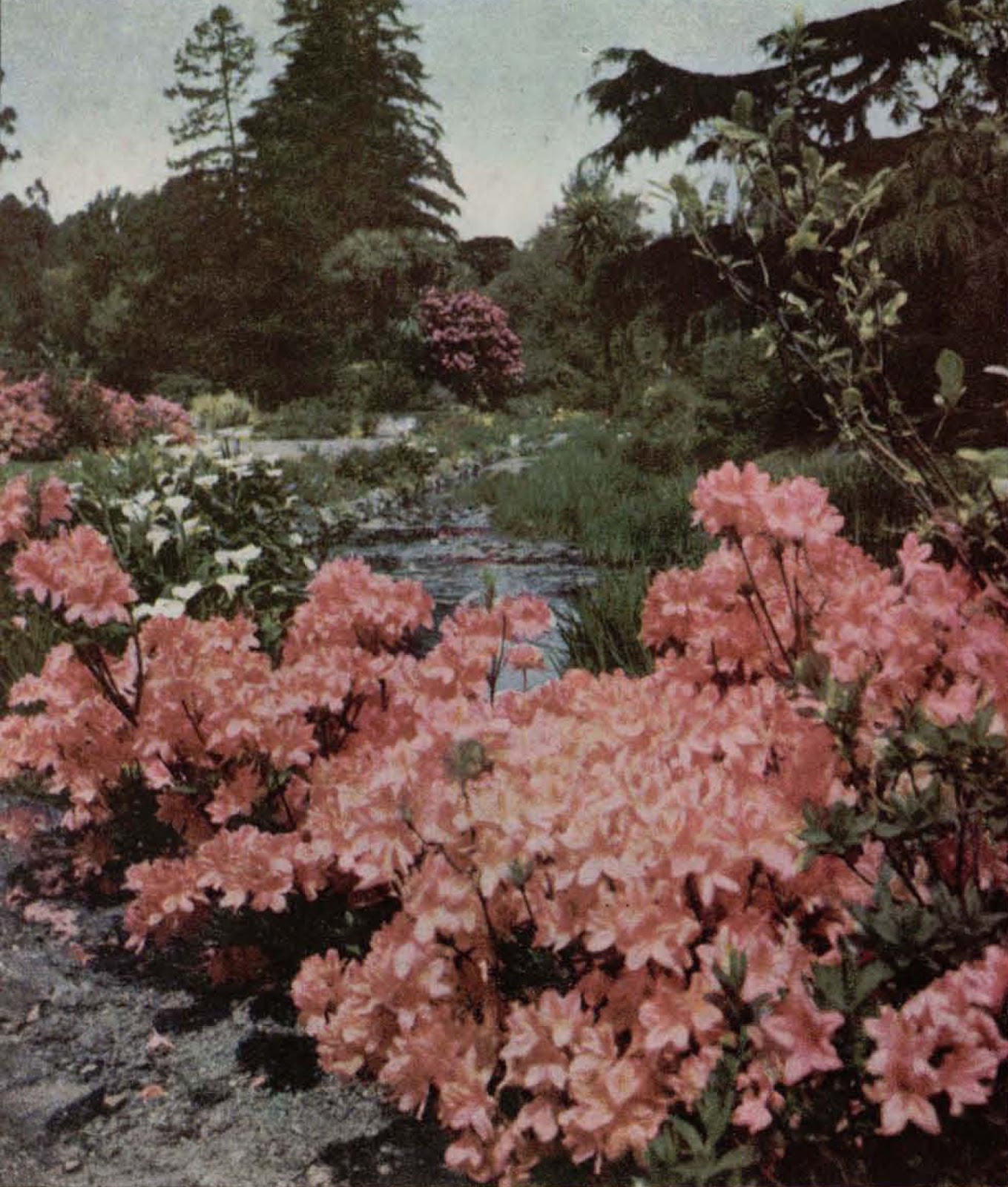 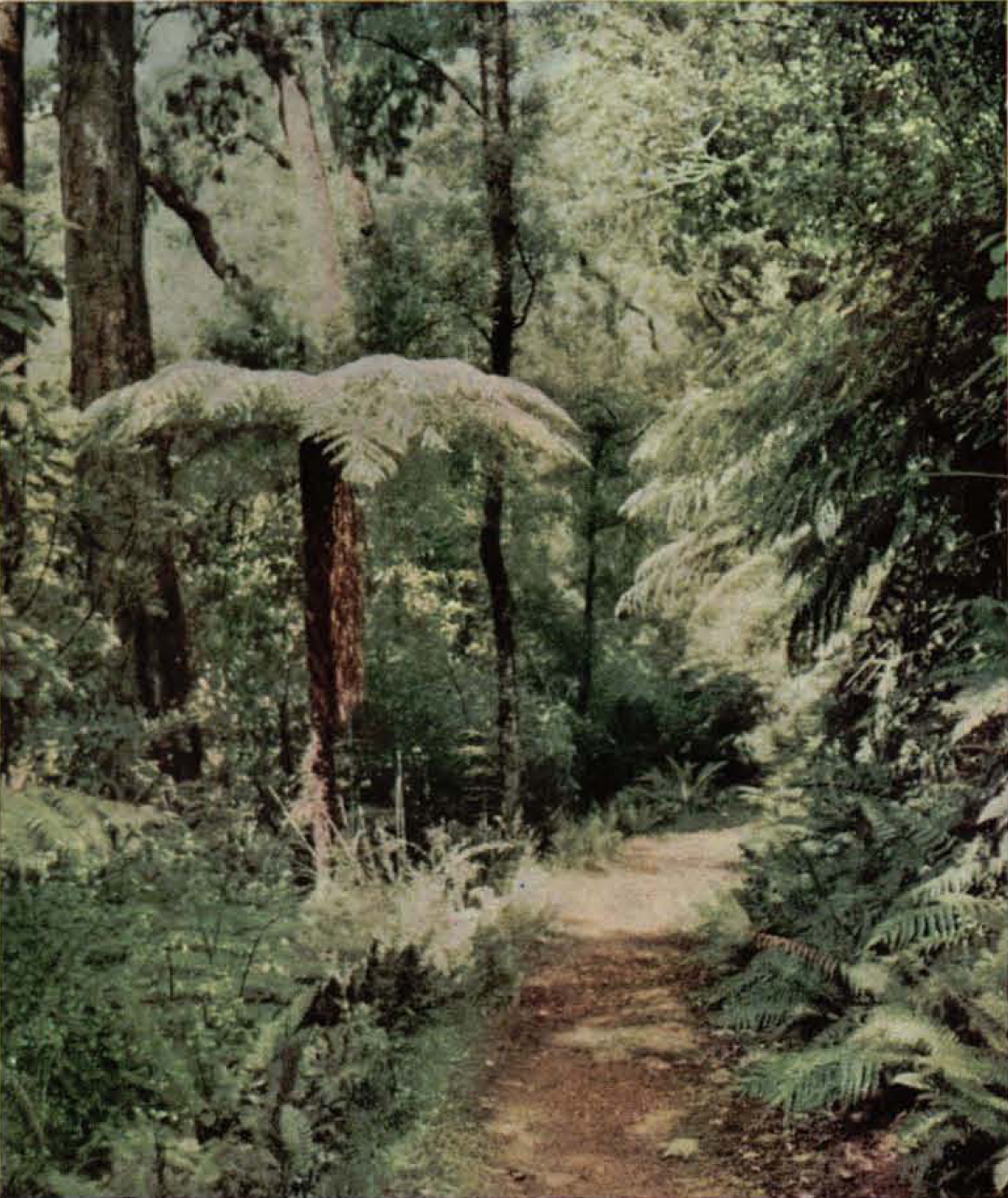 (1) Inventory of the Robert McDougall Art Gallery Archive Folder 8b: Correspondence 1932-1944 Containing: Letter, 20.11.1944, Town Clerk to EE Wiltshire (Vice President, Christchurch Photographic Society), granting him permission to utilise the main hall at the Robert McDougall Art Gallery to take photographs.
(2) Archives New Zealand, Wellington, record R22022174.
(3) Register of New Zealand Births, Deaths and Marriage 1946/34236   Wiltshire, Ernest Edward aged 62Y
(4) Christchurch City Council Cemeteries Database. Buried with  Eva Grahame Wiltshire
(5) "Camera in New Zealand," Anderson and Casbolt,  (1967), p31.
(6)  Photographic Society of New Zealand - http://www.photography.org.nz/index.html
(7) Victor Malcolm Alexander MacNaughtan (Vic): born 1920-died 1989
He married Isabella McArthur. The youngest of the eleven children, he was blessed with an excellent memory which helped in his schooling and whatever he read throughout his life.
After leaving school, he joined the Accounts section of Hutchinson Motors in Christchurch and in 1940 he volunteered for war Service, celebrating his 21st birthday en route to England in 1941. From the Fleet Air Arm, he was transferred on loan to the Royal Navy where he served around the coast of Britain and the Mediterranean, chiefly in Landing Craft. He returned to New Zealand at war's end with the rank of Lieutenant.
He married in 1948 and rejoined Hutchinson Motors. Then in 1958, the family, then with two children, Angela born in 1950 and Alan born 1953, moved to Milton, a small farming town south of Dunedin. Victor's accounting skills were put to use in another Motor Firm and a Wool Scour.
This was a period of active involvement for the whole family with Community Organisations and for Victor the Anglican Church, the District High School and the Borough Council were of great interest. At various times the St. Johns Ambulance, Boy Scouts and the Golf Club claimed his attention, in between caring for the house and garden.
In 1980 Vic and Isabella travelled to England to visit their daughter Angela and he was able to see the great contrast in that country compared to his war-time memories - http://freepages.genealogy.rootsweb.ancestry.com/~levarre/famchart/famchart.htm
(8) English census records of 1891 and 1911 indicate he was born in West Sussex rather than Kent.