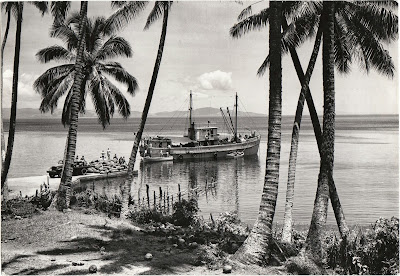 G894          The production of copra, the dried kernel of the coconut, is one of Fiji's oldest industries, and is produced on plantations and estates on many of the islands of the Fiji Group. The product is transported to Suva by island freighters and milled to produce coconut oil, The oil is shipped in bulk to overseas markets. Photo shows: Sacks of copra being loaded on an island freighter at Waimaqera Estate, Taveuni. 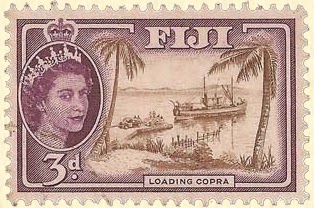 Bob Wright's photograph of loading copra was used in the design of this Fijian postage stamp in 1954. 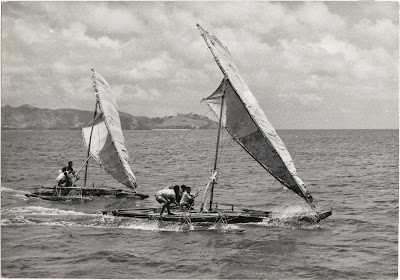 G5468      Fijian sailing canoes, constructed from hollowed logs and with sails made from woven pandanus leaves, are speedy craft which have been used by the Fijians since before the advent of the white man. Modern innovations such as outboard motors and planked boats are finding favour with the Fijians, and the outrigger canoes are now to be found only in the outlying islands of the Group. 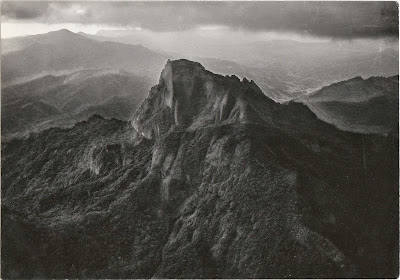 G784          Viti Levu (Big Fiji) 4053 square miles in area, is the principal island in the Fiji Group. It is roughly oval in shape, the main watershed lying along its north-south axis. The interior is mountainous and broken with 29 well-defined peaks, the highest of which is Mt. Victoria of 4,341 feet. Shown in the photo is Nabui, a peak in the Korobasabasaga Range. 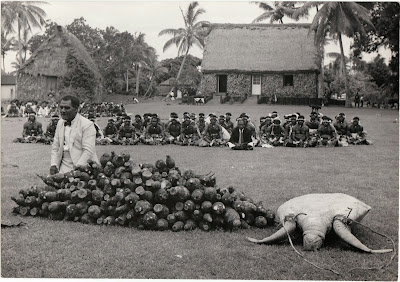 8436          In common with many other islands groups in the Pacific, the Fijians precede any event of importance with the traditional offering of yagona (the kava of Polynesia) and a magiti (feast). Here a spokesman for a group seated in the background, is presenting a giant sea turtle and a mound of taro - one of the basic foods of the Fijian people. 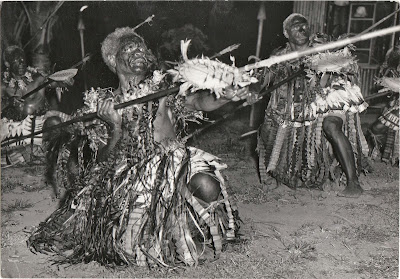 G4621        The artistic sense of the Fijians is expressed in the "meke" - a combination of song and dance. There are many variations of which the club and spear meke representing scenes of warfare, are often vividly portrayed. The dancers are accompanied by an "orchestral'' force of people who chant the theme and keep the tempo by rhythmic clapping of hands and beating of wooden drums and bamboos. Photo shows performers in a "meke wesi" - a spear and fan dance. 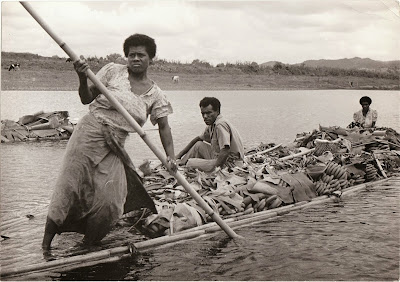 1925         The banana is today, through an increasing demand for this popular fruit, grown commercially in almost every tropical country and, as Fiji presents ideal climatic conditions and excellent soil, the growing and export of this popular fruit to New Zealand is a flourishing industry. Cultivation is almost entirely in the hands of Fijians who bring the fruit to packing stations where the banana fingers are stripped from bunches and packed into cases for shipment overseas. Photo shows: Bamboo rafts laden with bananas being poled down a river to a packing station. 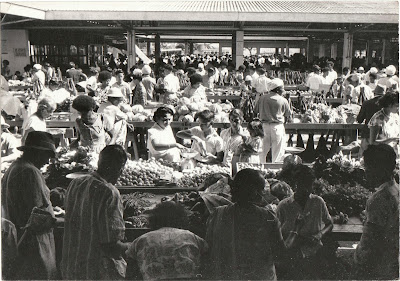 M688         The Suva Market place provides many glimpses of local colour. Here, people of many races and creeds and speaking many languages rub shoulders while they barter for foodstuffs. It is a mecca for vendors seeking to sell their wares and for those who seek to buy them. It is where East and West meet with the islanders of the Pacific. 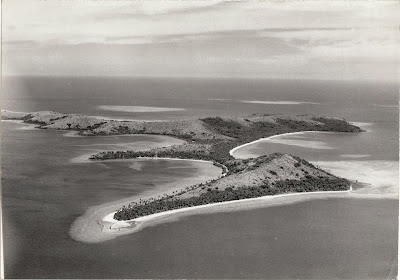 G5598        The attractive island of Nananu-i-ra off the north-eastern coast of Viti Levu is typical of many of the smaller islands in the Fiji Group. Fringing reefs of coral surmounted by beaches of white glistening sand form a protective barrier for the small bays of the island. Nananu has been continously owned or occupied by European settlers for almost 100 years and is renowned for its excellent fishing grounds. 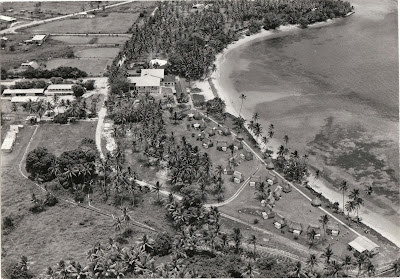 G5821         With its clusters of quaint Fijian-type huts, this could be a native village on the south coast of Viti Levu - Fiji's largest island. But it is the Korolevu Beach Hotel, one of the most unique and popular tourist resorts in the South Pacific. Guests are housed in these cosy self-contained units, bordering on a lovely bay. Korolevu is the only hotel in the South Pacific which boasts its own airstrip and aerial taxi service. 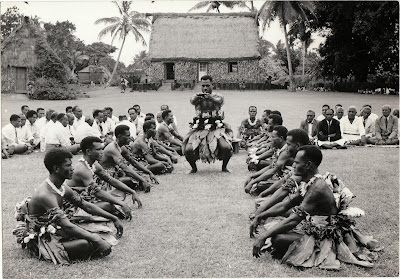 8418         Despite the advance of of Western culture in the Pacific, the Fijian race still retains most of its traditional customs, one of the most important being the yaqona (the kava of Polynesia) ceremony. Preceding any event of importance to the Fijians, yagona is prepared with elaborate ceremonial; the drink - a mixture of the pounded root and water - is presented in coconut halfshells. 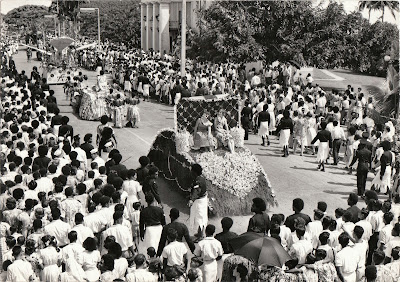 G4361.      Suva's annual Hibiscus Festival celebrated each year during the month of September, has become an event rivalling Bastille Day celebrations in Tahiti. It is an occasion when Suva is en fete and its entertainment includes island singing, music, and dancing; bands, sideshows, and marching girls; a procession of decorated floats, and the selection from a bevy of beautiful girls of Miss Hibiscus for the year. 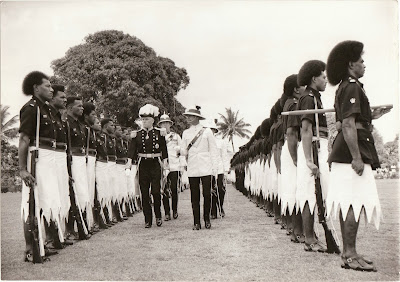 G4956.     The precision drilling of a Guard of Honour of stalwart Fiji Police in navy tunics, white scalloped sulus, and scarlet cuummerbunds, is an eye-catching spectacle during the opening of Legislative Council in Suva, by the Governor of Fiji. 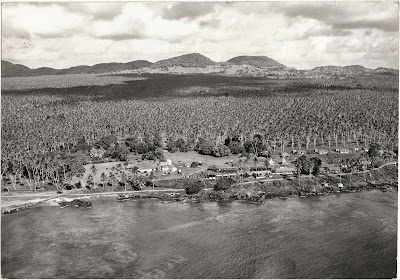 2927.        Approximately  60% of the copra production of Fiji is from Fijian-owned groves. The remainder is produced on European - owned estates such as that shown in the photograph. This is a plantation on the south end of Taveuni, one of the principal copra producing islands in the Group. In the left foreground is the owner's residence. In the centre, the drying sheds and kilns; at the right, houses for the workers employed on the plantation. 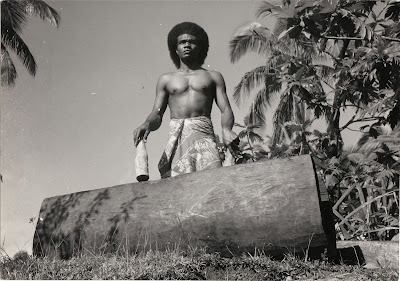 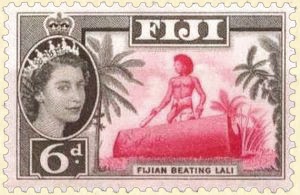 Bob Wright's photograph of the Fijian beating the Lali was used in the design of this Fijian postage stamp in 1954. 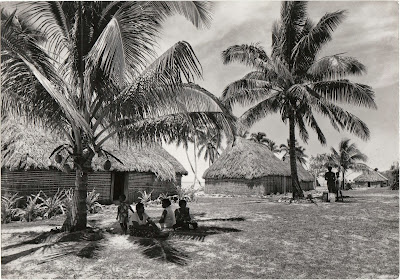 G5670      The siting of a village is something which is given mature consideration by the Fijians before building their houses. It must be accessible to a river or to the beach, sea, and reefs; it must have fertile land nearby for the growing of root and vegetable crops, and an adequate supply of fresh water for cooking and bathing. Above all, it must be sited where it receives maximum protection from the devastating effects of storms which may occur between the months of December and April. Malevu village on the Sigatoka coast of Viti Levu is typical of the many villages in this area. 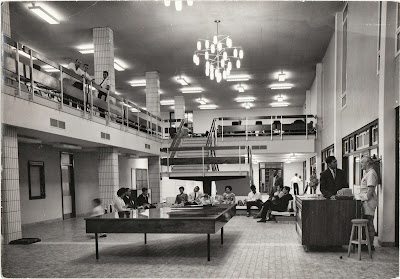 G5711       A section of the modern Terminal Building at Nadi Internationail Jet Airport. In this area, which is two-storied and air-conditioned, are changing rooms, showers, coffee and liquor bars, cafe, duty free shop, and comfortable lounges. 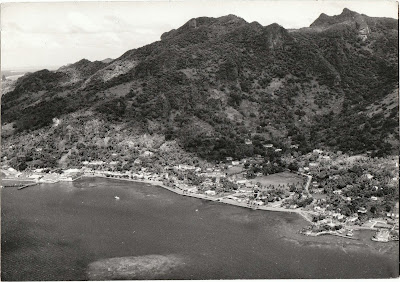 9089        Once a roistering town of ebullient seafarers and bibulous planters, Levuka, former capital of Fiji is today a quiet town basking in its former glory. The township nestles at the feet of bold spurs striking down from a line of mountain crags which include the highest peaks on the island of Ovalau. Traders first settled on the beach here during the early thirties of last century. After Cession in 1874 it was found that there was limited room for expansion and in 1881, Suva was selected as the capital.

Posted by Early Canterbury Photography at 1:16 AM