previously Millar and Austin
succeeded in Lawrence by Alexander Thomson 1902


born 12 March 1871, Cambuslang, Lanarkshire, Scotland
died 13 July 1933, West Middlesex Hospital, Isleworth, England
married 1896 Alice Bennett
In a private note which accompanied General Sir George White's letter to us, which we publish in another column, Mr Alex. Garden, Waitahuna, writes:— "If any of Sir George's countrymen in Lawrence would like to see his letter you might please let them peruse it." — Considering, as everybody must, that anything connected with a man who has shown such nobility of character, apart altogether from his military genius and devotion to duty, must prove interesting. We had the letter photographed by Mr W. R. Millar, photographer, next to the Tuapeka Times Office, in whose window it may be seen this evening. We might mention that Mr Millar, with true patriotic spirit, did the work as a labor of love and did it well.
Tuapeka Times, Volume XXXII, Issue 4758, 2 June 1900, Page 2
Photography

Mr W. A. (sic) Millar notifies elsewhere that he has removed his place of business from Peel street to Ross Place, where, having premises more adapted to his business, he expects to be able to command an increased measure of support. In his old premises, in addition to being off the principal business street, Mr Millar labored under great disadvantages— the studio not having been designed to secure the best results in the matter of lighting — a most important thing in the art of photography. His present premises, which are situated in a good prominent position in Ross Place, have been fitted up according to his own ideas, with the result that the very best effects can be got. A feature of the new premises is that the acetylene gas installation has been put in, thus enabling photographs to be taken in the evening. The studio is nicely fitted with all the necessary paraphernalia usually to be found in the best photographic studios Mr Millar's enterprise will no doubt meet with the reward it deserves.

Mr W. R. Millar, who has been engaged in the photographic business in Lawrence during the past few years, leaves to-day for Rotorua, where be has received an appointment under the Government as assistant electrical engineer in connection with the Sanataria at that place. During his residence in Lawrence, Mr Millar identified himself with the Fire Brigade and with the Orchestral Society and Brass Band. On Monday evening he was presented with a silver pencil ease by the members of the Fire Brigade.


Mr W. R. Millar. A.M.A.I.E.E., M.Inst., Mun.E., who was with the Wellington City Council until coming to England as electrician of the Ruahine, with the 29th Reinforcements, has taken up munition work in London. He is works engineer at the National Filling Factory, at Park Royal, under the Ministry of Munitions. 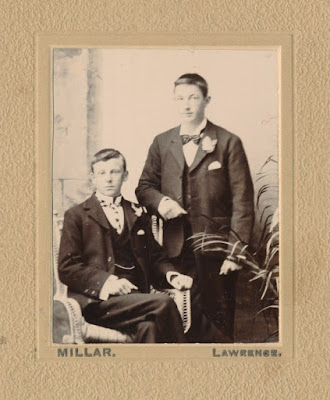