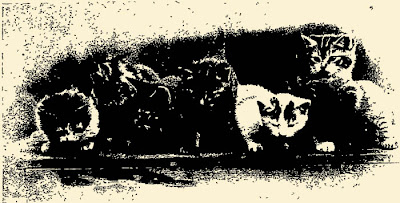 I suppose if the Ancient Philosopher were here to-day he would exclaim, "Oh that mine enemy had made a picture!" or might he not write, "Of the making of pictures there is no end"?

Time was when the making of a picture, however crude, was considered a very fine art; to-day no school girl's education is complete without a course of instruction in picture-making. But in the old days men did fine work by hand which at present is done by mechanical devices, and art in many respects is now confined more to conceptions and creations than to the humdrum technical work of the past. Whether this is for better or worse is a question, though it is noteworthy that from the labyrinth of what is called art to-day the masterpieces find their way to the front, and are recognised by the original and special treatment. The artist, like the poet, is born, not made. Horsley Hinton says, "The artist is what he is from the possession of certain instructive attributes which he is powerless to teach to another, whereas the simpler expressive forms of draughtsmanship may be attained by almost all." 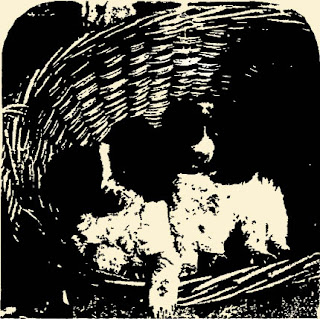 What applies to one form of art applies to another; but when we come to art in photography we are unable to compare the masterpieces of old with the work of to-day, for the simple reason that it is an invention of modern times, and has not yet reached its highest point of development. During the past 60 to 70 years marvellous progress has been made in the art of photography, and it has now almost entirely superseded the woodcut for illustrating books and periodicals. Oliver Wendel Holmes once wrote, "The photograph has completed the triumph by making a sheet of paper reflect images like a mirror and hold them as a picture. This triumph of human ingenuity is the most audacious, remote, improbable, incredible. It has become such an everyday matter with us that we forget its miraculous nature, as we forget that of the Sun itself, to which we owe the creations of our new art." An authority on the art of illustration says photography has obtained a hold upon the people, entering into their work and their amusements the speed, the reality, the brilliancy of it fit it peculiarly for the age into which it has been born." 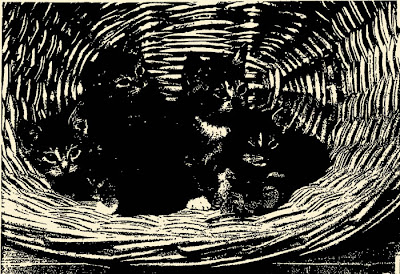 Without a doubt photography has become one of the crazes of the day, its votaries being found amongst all classes, even including royalty. Like all crazes photography has been taken up by hundreds of tyros, whose chief aim it is to seek amusement in snap shotting with a cheap hand camera and are satisfied with one passable negative out of a dozen plates. This affords entertainment to those who don't care twopence about art it is good for the trade in photographic goods, but the professional scorns the thought of such work, and tells us that if one desires to develop the artistic temperament he begins at the wrong end when he takes to the hand camera. With the stand camera everything is different. It takes from three to five minutes to remove the apparatus from its case, fix it up and compose one's picture on the ground screen, and before going to that trouble it is obvious that an amateur would make pretty sure that his subject was a worthy one. With the stand camera the photographer has also the advantage of seeing his picture in detail as compared with the postage-stamp-like view one gets in most hand camera viewfinders. There is also the question of cost. A stand camera can be bought that will do better work than a hand camera of much higher price, and the waste in plates is a mere bagatelle beside the other. Most beginners wonder how artistic work with the camera is accomplished. Of course amongst professionals there are many tricks of the trade, but there are various branches of study which any amateur might take up and excel in with-out resorting to artifice. Animal studies are very popular, and this branch of the work is perhaps as fascinating as any. All that is required is an ordinary stand camera with a roller blind shutter of the usual pattern, with which class of instrument, it may be here mentioned, the photos illustrating this article were produced. Most of the professional animal work done to sell is produced by a special camera, which allows the operator to watch his living subjects right up till the very moment of the exposure. But the photographer who took the photos accompanying this article had all the difficulties to contend with that an amateur would have. He had to pose his animals, focus them, and put the plate into his camera before the exposure could be made. Anyone who understands photography will know what this means, and the patience needed to secure first class work in these circumstances. Yet pictures as good as the ones here reproduced may be obtained by almost any amateur who is fond enough of the hobby, and is prepared to exercise patience and common sense. A lot depends upon the operator's treatment of the animals. He must make himself friendly with his subjects at the outset by handling and fondling them, and, by thus gaining their confidence, half the battle is won. The camera used for the pictures under comment was a half-plate with a whole-plate rectilinear lense, the latter costing about £4 10s in New Zealand. The object of using a whole-plate lense is obvious. It enables the photographer to stand further than usual from the animals, to use a larger stop, and to give a shorter exposure. 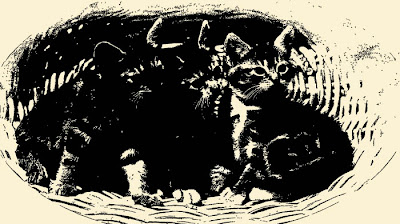 "WE ARE CURIOUS BUT NOT QUITE SURE"

In the great field of Nature studies the amateur has many avenues open to him, any one of which will provide pleasure and amusement, to say nothing of the developing of the "eye for art." Preference is given to some to landscapes, others seascapes, birds and their nests, and quite a number take to animal photography. In this line our photographer has taken chiefly to "cats," endeavouring to "out- Wain" the great cat artist, Louis Wain, himself. To produce the picture called "We are Seven," the photographer had to go out into the highways commandeering his neighbours' cats, the seven little New Zealanders on the box being the representatives of three different litters. No one but the artist himself would say that they were anything but a happy family, and who would imagine that it took three persons constantly at work putting the lively young animals back in their positions as they jumped off the stand. As fast as they were placed on the box the kittens hopped off again, and it was only by patience and perseverance that the camera came off victorious. The picture of four cats in a basket was a first attempt, as may be seen by the scared look in the faces of the subjects. With three of the same cats later on a much better picture was obtained. The expression on the faces of the trio was produced by a snap of the fingers at the critical moment. 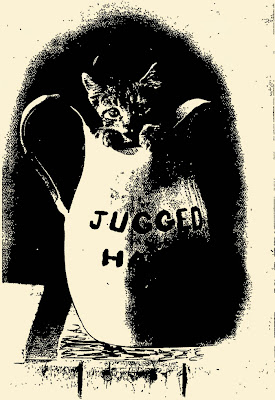 The difficulties in the way of preparing "Jugged Hare" was almost as great as the chef has to face in his cuisine. Pussy did not take kindly to the jug at first, and bobbed out several times before she fully appreciated the novelty of the situation. Then she stood for her photo as though to the manner born. The operator in the excitement of the moment forgot to take the kitten out of the jug, and went to his dark room to develop the negative. On returning about 20 minutes later he asked himself the question, "What's become of the cat?" This question was not easily answered, and, after a thorough search of the studio, and photographer gave up the problem. A little later in the day, when fresh water was wanted, the photographer grasped the handle of the jug, and, Ceasar's ghost what was that? It was the cat curled up in the bottom of the jug, fast asleep! 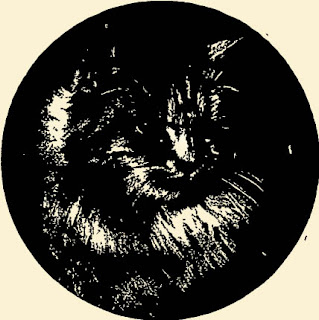 One day, when the photographer was wondering what he could find to amuse the camera, he bethought himself of a neighbour's spaniels, and, requisitioning his landlady's clothes basket, he soon had focussed before him the picture called "Chums." During the whole operation the dog on the right growled in a most threatening manner, but the other dog took a very philosophic view of the affair, and together they made a charming pair. Strange to say, three years after this the same operator took another pair of spaniels in a clothes basket for stereoscopic purposes, and the similarity was so great that one might well say they were a double of the first pair. If the stereoscopic picture here reproduced is cut out and pasted on a piece of cardboard it will be seen through the glass to form one of the finest dog pictures one could imagine. The puppies almost speak, and one would swear that they move their heads.

The photos accompanying this article were taken by Mr J. G. Lamb, Christchurch, representative of Underwood and Underwood. 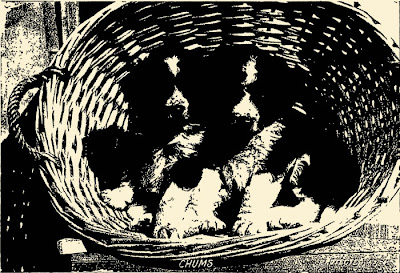 Posted by Early Canterbury Photography at 1:19 AM