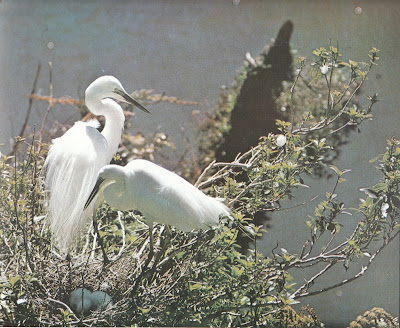 Mountain Tragedy
Young Climber's Death Struck by Huge Boulder
[By Telegraph —Press Association] Dunedin, Friday
The mountaineering tragedy above the Homer tunnel, in Hollyford Valley, on Wednesday, involving the death of Mr. John Hunter Maclean, aged 22 of Dunedin, was caused by a huge boulder striking Maclean, and not as the result of a fall down the mountainside, according to information supplied by one of his companions. The dead man was a member of a party fully equipped for mountaineering, the others being Mr. George Chance, jun., of Dunedin, and a guide, Mr. Donald Cameron, of Hollyford. They were returning from Milford to the Homer tunnel by way of Trave Talbot Pass, and were within a quarter of an hour's walk of the Public Works camp when they decided to rest on a ledge.

The three men were roped together, Mr. Maclean sitting between the other two. Without warning a huge boulder six feet above them fell and struck Mr. Maclean, death being instantaneous. Chance had a lucky escape, the boulder just moving him. An inquest was opened this morning at the Homer camp and adjourned.
New Zealand Herald, Volume LXXV, Issue 22961, 12 February 1938, Page 15

George Chance goes to great trouble to photograph his natural history subjects in their right surroundings. This remarkable photograph of the beautiful white heron, or Eastern Great White Egret, was taken in the protected nesting grounds on the Waitangiroto Stream, near Okarito in South Westland. George used an Asahi Pentax fitted with a 135mmm Takumar lens. The film was Kodachrome I exposed at 1/00 sec. at f 4.5.
Camera in New Zealand, A. H. & A. W. Reed 1967, page 223 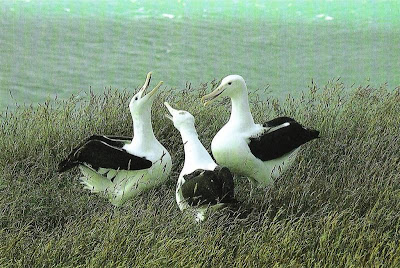 The Ornithological Society of New Zealand.
OSNZ - Otago Region Newsletter 1/2008 February 2008
In Memory of George Chance.
by Jill Hamel
Bird watchers around New Zealand will see with regret that George Chance died in January this year at the age of 92. His photographs of the Royal Albatrosses at Taiaroa Head, Falcons of the Otago hills and Crested Grebes at Lake Hayes will live long after him. Particularly memorable were the giant prints that he created with special equipment in the Otago Museum darkroom. And I mean giant metres of glowering Falcon on the wall of the Museum foyer had real impact.

George's bird photography deserves a better record than I can put together. Using my old notebooks, I see that, after I became Otago's Regional Rep in 1964, George was a major supporter of various schemes. The three that I remember best were working in the wetlands of Lake Tuakitoto, trying to find Brown Teal at Freshwater River and Mason Bay in Stewart Island, and building a bird watching hide at Waikouaiti Lagoon.

As members of OSNZ, we were not meant to involve ourselves in conservation issues, just provide independent advice. Magnus Sinclair had been studying Fernbirds in the wetlands which extended north from the open water of Lake Tuakitoto when the Otago Catchment Board announced its intention to drain much of the wetlands and increase the open water area. He asked for our help. George put in some very wet hours getting photographs of Fernbirds at the nest, as well as some duck nests, to help the cause. (We didn't win. The drains were dug, but years later John Gillies, the Catchment Board engineer of the day, admitted that nature foiled him. The bed of the Clutha River silted up by over a foot and prevented the drains from working effectively. (The lake and wetlands are now a reserve.)

As part of his interest in rare species, George was keen to get photographs of Brown Teal on Stewart Island. In good military fashion, George had a carload of us away from Dunedin by 4 a.m. and all assembled at the Bluff ferry by 8 a.m. With help from Jim Watt's family, we were transported by fishing boat up a turbulent Paterson Inlet and by the Watt's dinghy up Freshwater Creek to the rather simple tramping hut at Freshwater Landing. George and Magnus spent some days hunting for Fernbird nests using tape recordings of calls. We walked through to Mason Bay on some very boggy tracks to explore creeks and ponds for Brown Teal, without any luck. This was in January 1968 when George would have been 52, had been through a great deal of soldiering in both Africa and Italy and broken a leg skiing at Coronet Peak. My memory is that he was usually well ahead of everyone else on the longer treks. The irony of the trip was that the only Brown Teal we saw were seven birds lurking in a creek at Half Moon Bay a hour or so before we were due to catch the ferry back home.

When, in 1968, George saw and photographed an Australian Little Grebe on a dam near Arrowtown, a first for New Zealand, I can remember how pleased we all were. (I do not know why the new bird atlas says this sighting was at Lake Wanaka.) There were some indignant conversations in Otago, when the gurus on the Rare Birds Committee expressed some doubts. George dealt with these by publishing not only a photograph of the Little Grebe, showing its bright spot between eye and bill, but also photographs of adult and juvenile NZ Dabchicks to show the clear differences. George's photographs of Bitterns may have been taken about the same time, but Mathieson Beaumont remembers one from the Green Island estuary.

George's work was done systematically, by spending as much time as possible observing each species until he understood the bird well enough to place a hide at a nest. Geoff Moon thinks that there have been only three or four other bird photographers in New Zealand besides himself and George who have used hides regularly. He tended to concentrate therefore on one or two species at any one time. It would be as valuable to know not only which species George photographed but also when. Talking to George's family, I found that it was George who recorded the breeding of Spoonbills in the early 1960s in the Okarito White Heron colony, and compiled a series of photographs of both species at their nests. Mathieson Beaumont considers that his fine series of Royal Albatross was taken during the 1960s. According to his nephew, Dougal Stevenson, some of his last efforts in a hide were at Aramoana where he got images of White-fronted Tern chicks emerging from the eggs in the nests alongside the mole. Only weeks before George died, Dougal took him into Central Otago to look at the site of the proposed wind farms. George's birding career must have spanned at least 50 years.

Though George's bird photography is best known for albatross, falcon and grebe, he worked on many other species. I invite others to send me notes of field work that they did with George, which I will hand on to his family to file with the collection of his photographs. I hope that a compilation of the species and dates of photographs can also be put together as a memoir for publication. His colleague, Mathieson Beaumont, made scans of some of George's photographs and is willing to provide some for illustrations.

Courtesy of  The Ornithological Society of New Zealand (Inc.) 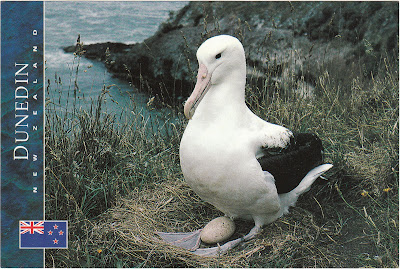