Mr. J. N. Isaacs returned last week by the R.M.S. Suevic from England, where he has been studying photography for the past three years. Mr. Isaacs has been in some of the best studios in London, and has brought out all the latest plant and ideas with him. Be has purchased the Victoria Studio in Manners street, which he is having renovated and refurnished throughout. He makes a special study of children's photographs.
Evening Post, Volume LXV, Issue 41, 18 February 1903, Page 5

Mr. J. N. Isaacs, who has been away to England for three years, learning all that is new in the art of photography, has acquired great skill in the most modern methods. He particularly strives to produce natural results, and there is an absence of stolidity about his subjects that does credit to his training. He is remarkably successful in obtaining good results in child photography, and already the Victoria Studio, in Manners-street, has many patrons who eulogise his skill.
Free Lance, Volume III, Issue 141, 14 March 1903, Page 8

I have pleasure in announcing that I have purchased from Messrs. Wrigglesworth and Binns the whole of their negatives, and am now prepared to supply copies to original sitters. These portraits will be supplied in the latest and most up-to-date styles. J. N. Isaacs, Victoria Studio, Manners street.
Free Lance, Volume V, Issue 261, 1 July 1905, Page 8 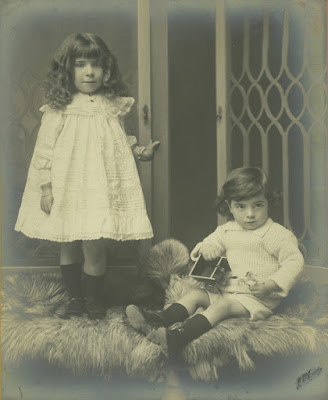 unknown children, possibly with the surname of Brown photographed by J. N. Isaacs

A branch studio has been opened at Newtown by Mr. J. N. Isaacs, photographer, of Manners-street, in premises erected by Messrs. Pearce and Co., Ltd., in Riddiford-street. The studio is up-to-date, possessing both natural and artificial light, enabling photographs to be taken at night as well as in the day, Mr. Isaacs is personally conducting the branch business.
Evening Post, Volume LXXV, Issue 144, 18 June 1908, Page 8

Creditors in the bankrupt estate of Jacob Nathan Isaacs, photographer, met in the rooms of the Official Assignee this morning. The bankrupt stated that he commenced business in Manners street about eight years ago, purchasing a studio for £275.

For a number of years the business showed a profit, and in 1907 he obtained a seven years' lease of premises in Newtown, and expended a considerable sum in fitting up a branch studio there. This enterprise turned out a complete failure, and to the continued depression and consequent loss of trade in Manners street, he attributed his present position.


Yesterday the employees of Mr. J. N. Isaacs (who is leaving Wellington) met to bid him farewell, and presented him with a handsome gold sovereign case.

Posted by Early Canterbury Photography at 3:29 AM

Wow! This photographer photographed my Great, Great, Great Grandfather & his wife. I have only just come upon the photos which belonged to my recently deceased Aunt. I thought these relatives of mine stayed in England, Stepney, Whitechapel....... Amazing...Sandy Johnson from Wellington. I wonder if any of Jacob Nathan Isaac's family are still around. I'm trying to find out about these ancestors.(mine.) James Lambson whom was photographed was a carpenter.... Im assuming in Welli gton. This is a miracle finding this for me as my Ancestry has been hidden for so long. Regards Sandy Johnson

Hi there, this photographer or his son (not sure which 1) photographed my Great, Great, Great Grandfather & his wife. I've only just found this out just now. After 59yrs it's taken me 2 know my Ancestor actually came to New Zealand. All my life I thought he stayed in Stepney, Whitechapel, Tower Hamlets. I have just come across the photos from my recently DECEASED Aunts estate. All this time I never knew these Ancestors of mine came to NZ. Now because of your Website on the Studio I have found who took his photo. J.N. Isaac's, Victoria Studios Manners St, WELLINGTON is at the bottom of the photo. He was a carpenter. I've yet to find out where. I'm wondering if any of you who keep this information alive are the people who have descended from the Isaac's family. Well, well, well,.......Hidden from me all these years. Interesting. James Lambson was his name. Guess he could be buried here too??? Lots of questions, needing answering... my search will continue... regards Sandy Johnson

This is a very interesting site, thank you. From information here I see that the negatives from Wigglesworth & Binns were purchased by J N Isaac in 1905, Does anyone know if there is any record of what happened to those negatives on Isacc's bankruptcy in 1909? Regards Stewart Oliver

Included, in the stock of Messrs Wrigglesworth and Binns’s destroyed in yesterday’s fire was a collection of over fifty thousand negatives, dating back for the past thirty-five years. Those formed perhaps the most interesting connection with Old Wellington which existed in the city.
New Zealand Times, Volume LXXI, Issue 4259, 19 January 1901

Thanks for the reply, what a shame the plates no longer exist, I have a couple of Wigglesworth Wellington photos in poor condition. They are of relatives and it would be nice to find more, a pity that's not possible.

Generally, photos were sold in lots of 12 so you might find other copies of the same photographs in your wider family.