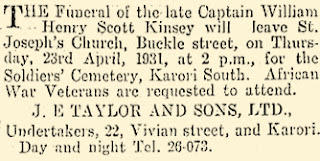 
Some admirable samples of photographic work are to be seen in the studio of Mr. W. Kinsey, of Lambton-quay, one of the photographers to His Excellency the Governor. Chief amongst them are large-sized portraits of His Excellency, of a lady in bridal costume, a "sitter" in the character of Romeo," some large groups of footballers, and a portrait of Mr. E. Tennyson Smith, the Temperance advocate, with Mrs. Smith and the members of their local committee.

Several oil paintings from Mr. Kinsey's brush, opals, permanent enlargements, &c, are also on view. Recently Mr. Kinsey has materially improved the interior of his premises, the reception room in particular having been very effectively decorated by Mr. Emil B. Muller, a German decorative artist. The room is comfortably appointed for visitors, and contains in addition to samples of the various classes of work done on the premises a piano, music, journals of art, &c.

Argument was taken by Mr. Justice Edwards to-day in reference to a case in which Amy Kinsey seeks to compel her husband, Wm. Scott Kinsey, to carry out an agreement to sell her his interest in a photographic business on Lambton-quay for £300. The form of to-day's phase of the matter was a summons on the part of the defendant calling upon plaintiff to show whether there was any legal cause of action disclosed. Mr. Wilford appeared for the plaintiff and Mr. Campbell for the defendant. His Honour, after hearing argument, decided that there was an acceptance of the defendant's offer to sell, that the subsequent paragraph in the letter to the plaintiff was a paragraph which in his opinion was a mere notification, and did not impose any new condition. The summons was therefore dismissed, with £10 10s costs to Mrs. Kinsey.

The premises on Lambton-quay, nearly opposite the head of Grey-street, at present occupied by Mr. Kinsey, photographer, are to be removed in order to make room for the station in connection with the High Levels Tramway. Mr. Kinsey intends to carry on his business on the two upper floors of the three story building which Mr. C. H. Dryden is about to build for Messrs. G. and T. Young, watchmakers, on the site of Messrs. King and Muir's old shop on Lambton-quay. The contract is to be completed by the end of September.


KINSEY'S PHOTOGRAPHIC STUDIO.
The anticipated construction of the High-levels Tramways from Lambton-quay to Karori has led to the removal of Mr. W. Kinsey's photographic studio from its familiar and long-established position opposite Grey-street, as that site is required by the Tramway Company.

During the present week Mr. Kinsey and his staff have been busily engaged removing from the old into the new premises, which are located upon the first and second floors of Messrs. G. and T. Young's handsome new building in the central portion of the Quay. The new showrooms and studio are approached by a vestibule and stairway, the walls of which have been utilised as a gallery for the exhibition of the gems of the Kinsey studio.

Upon reaching the first floor the visitor passes through the office, thence into a large and well-furnished reception room, which, with the adjoining dressing-room for ladies, faces Lambton-quay. In the dressing-room are hung some very fine engravings and exceptionally good photographs by Chas. Reid, a noted Scotch artist. From this room entrance is obtained into a large, well-lighted, and up-to-date operating room, 40 feet long, with a width of 24 feet.

Another ascent takes the visitor on to the floor where the busy side of photography is seen in all its activity. The first room entered is a storehouse of negatives, the laden shelves containing 45,000 counterfeit presentments, dating back to those first days of the firm, when Messrs. Cazneau and Connolly's names were on the imprint.

Adjoining is the room wherein the retouching and mounting work is done, and a knock at the next door gives admission to Mr. Kinsey's sanctum. A few more steps takes the visitor into the principal dark-room, off which is a compartment wherein enlarging work is done. Enlargement forms no small portion of the firm's business. Another room is devoted to the enamelling department, and behind this again is the toning room, with concrete floor, lead-lined sink, and conveniently placed racks.

Last scene of all, upon a position slightly more elevated than the rest of the floor, and at the back of all, without obstruction, is the printing-room, with its stretch of plate glassed roof and cunningly contrived shades and benches for catching the sun's rays at all times of the day.

The whole of the premises has been excellently designed for photographic purposes by the architect (Mr. William Crichton), and the builder (Mr. C. H. Dryden) has ably carried out the designs. It is Mr. Kinsey's intention to throw his new premises open this evening for the inspection of all interested in the art and methods of photography. 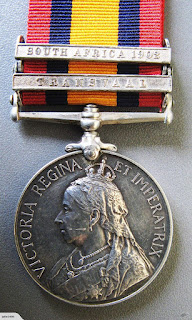 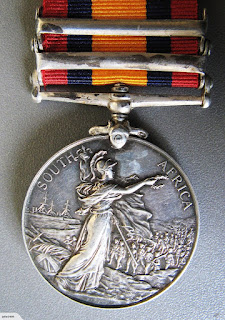 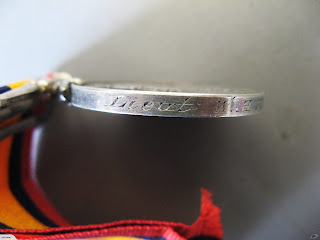 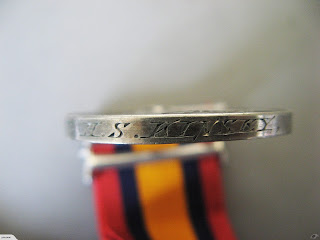 
KINSEY'S STUDIO.
Visitors to the Exhibition should not miss a visit to Kinsey's Studio. Lambton-quay, opposite Harcourt and Co., where a splendid collection of portraits is on view in his gallery. Mr. Kinsey is not only a photographer but an artist as well, and the figure studies that line the walls of his studio give ample proof of his artistic talent. Portraits in oils, water colours, and crayon are to be seen side by side with photographs in many styles. These photos are at once noticeable for the splendid lighting effects, graceful poise, and artistic finish.

Many of our notable men have sat for a portrait before Mr. Kinsey's camera, and their enlarged portraits, some in oils, some in carbon, tend to show the versatile hand that guides the brush.

All photographs are taken by Mr. Kinsey himself, and no proof is allowed out of the studio unless it is perfect, and clients are assured that all photographs are permanent they never fade, but retain their brightness for all time.

The studio is of the most modern type, fitted with all the latest accessories of the photographic art. Owing to its superior lighting qualities, dull weather is no bar to taking a good picture. Visitors are made welcome at all times, whether they come for sittings or to view the pictures in the studio, where Mr. Kinsey has for many years past been amassing works of art. 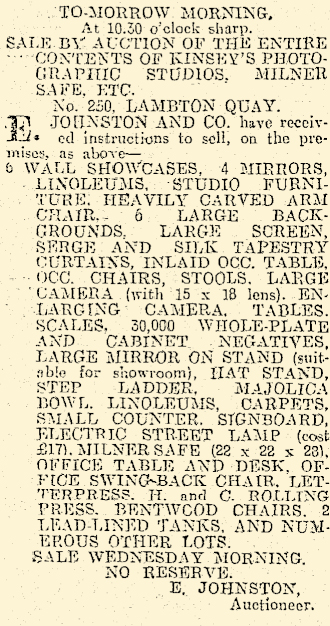 Mr. William Henry Scott Kinsey, who was for many years in business on Lambton quay as a photographer, died in Wellington yesterday afternoon at the age of 71 years. He had been living in retirement during the past few years. In his younger days Mr. Kinsey took considerable interest in the volunteer movement and was a lieutenant in the Heretaunga Mounted Rifles. He served in the South African War, and obtained his captaincy there. 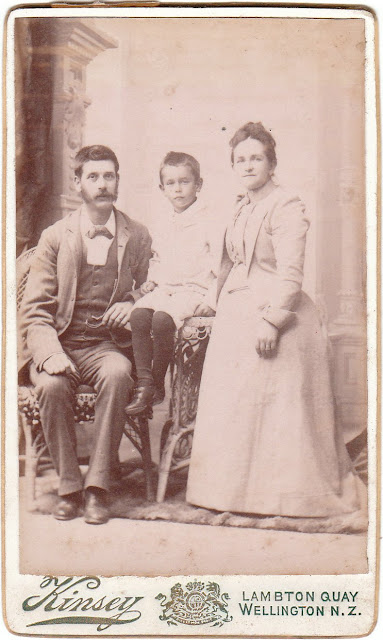 above - portrait of an unknown family by William Kinsey 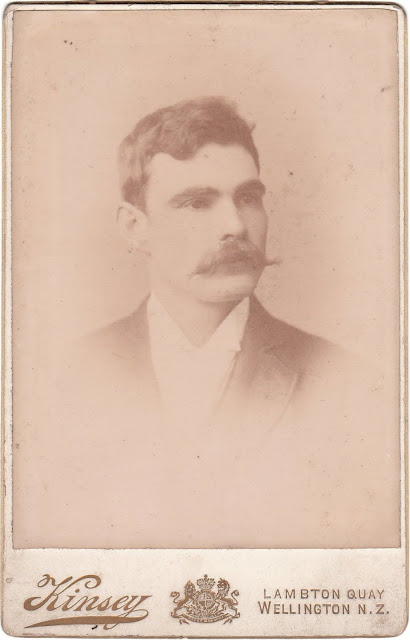 above - portrait of an unknown man by William Kinsey 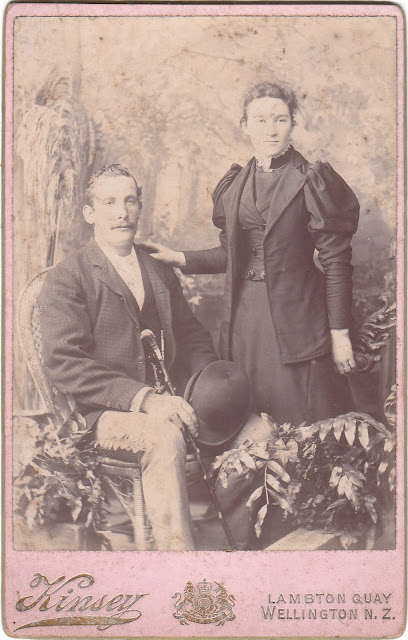 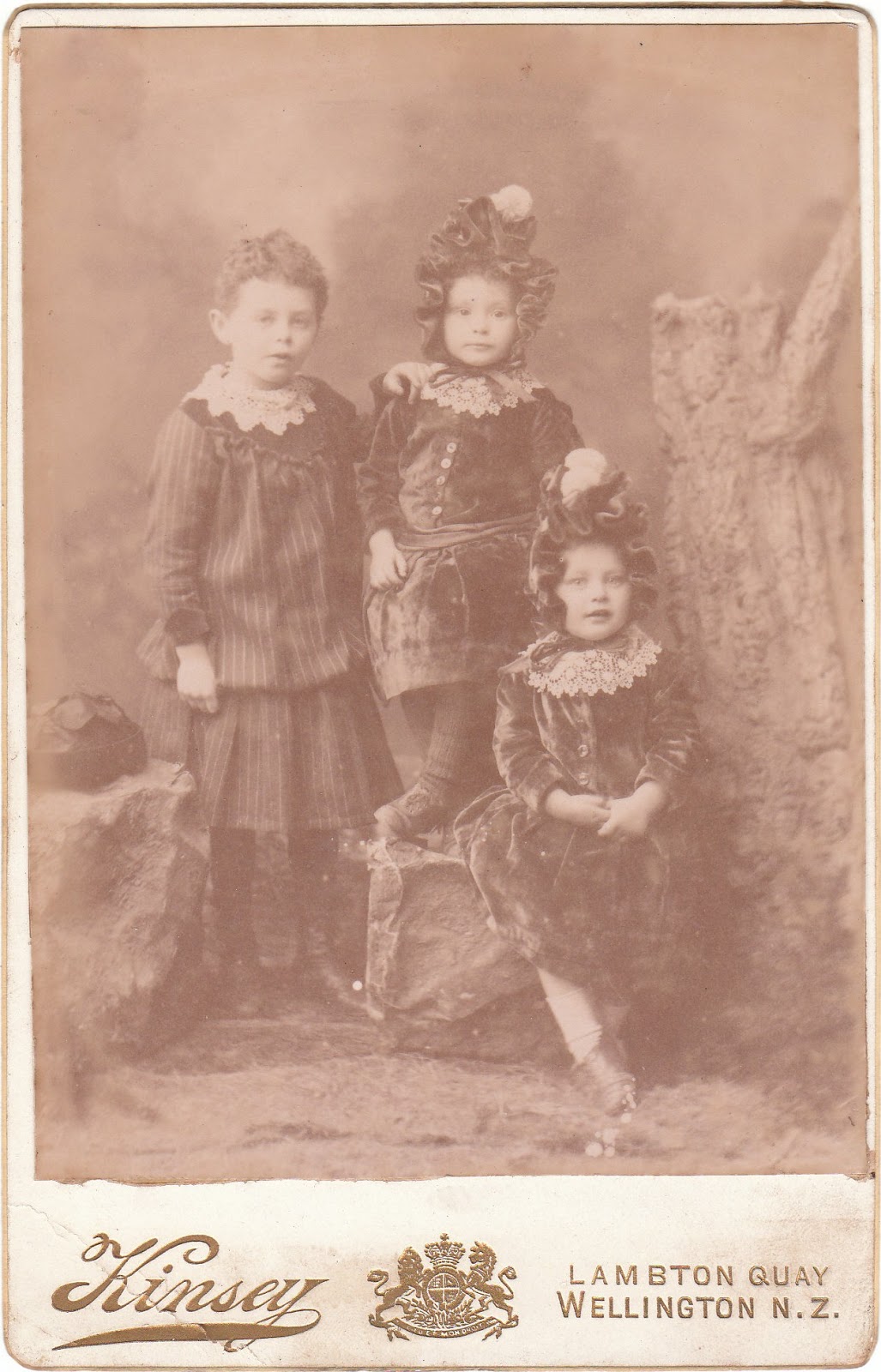 "To Mrs Pickering from Dan & - With Best Wishes" 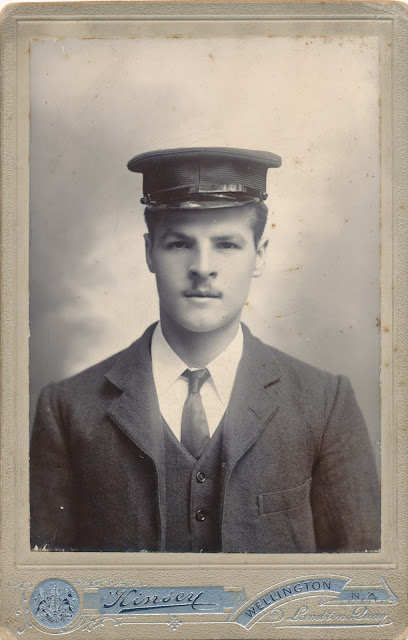 reverse inscription - "With kindest love to Mother from Isaac" 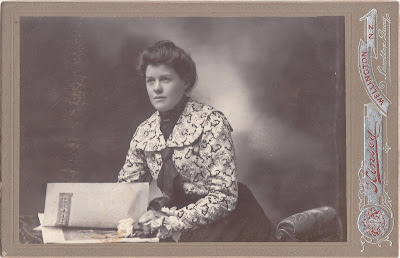 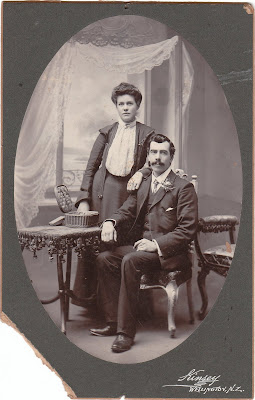 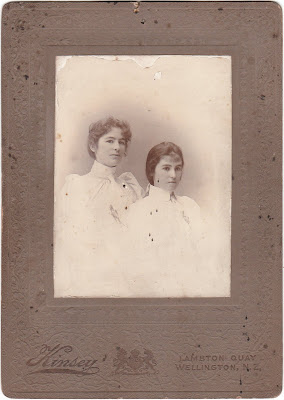 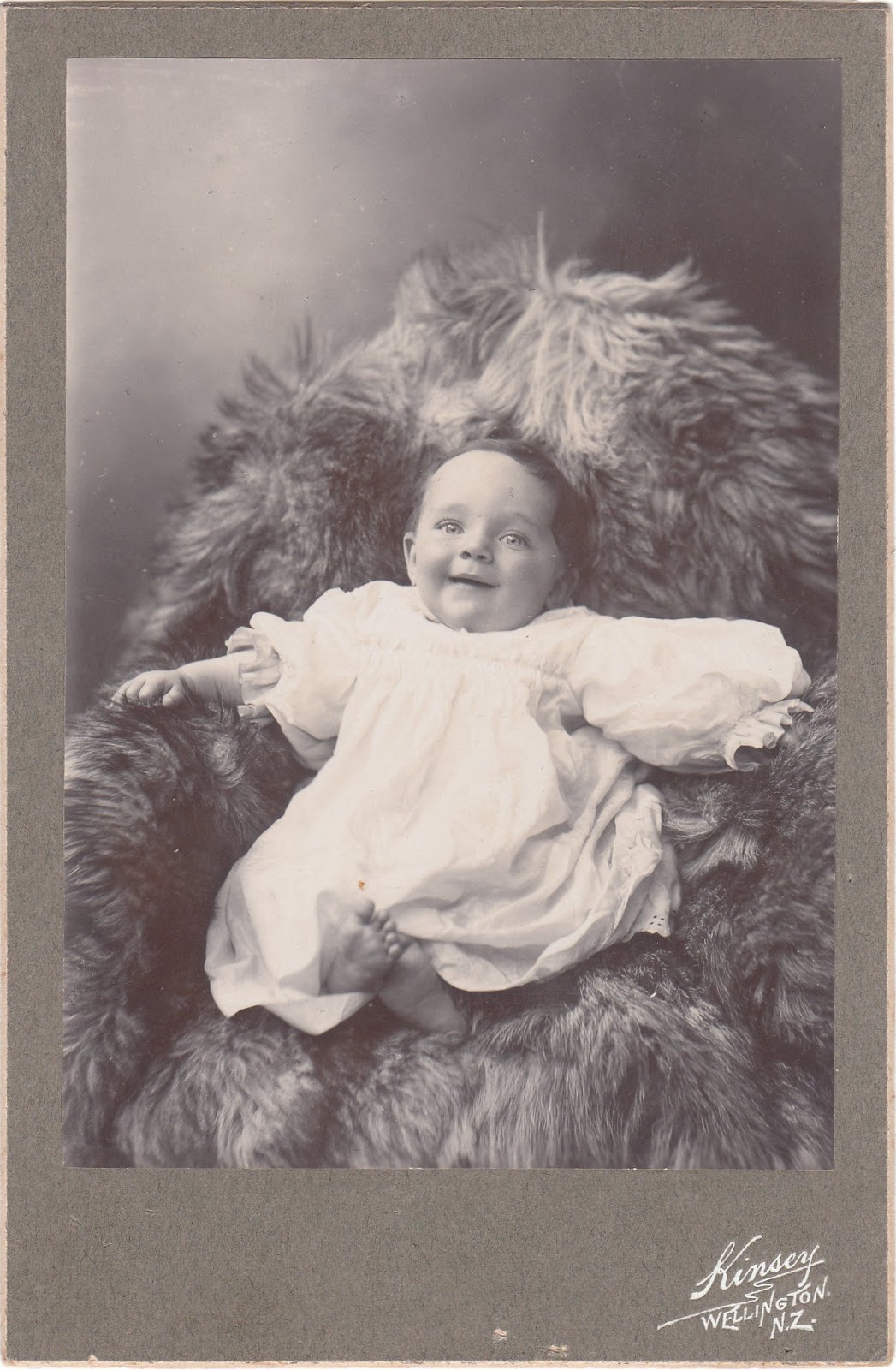 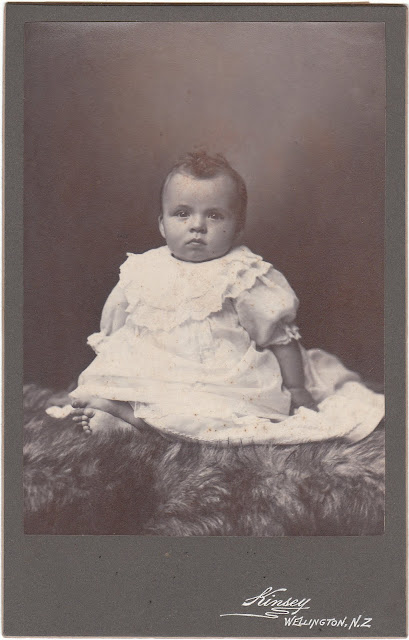 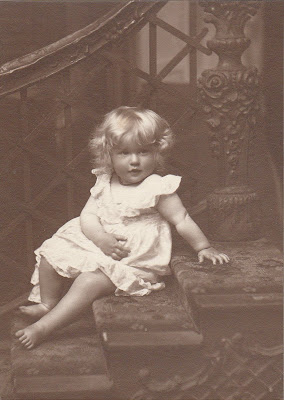 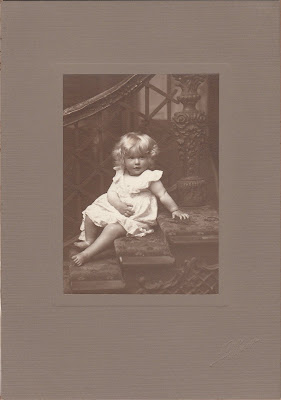 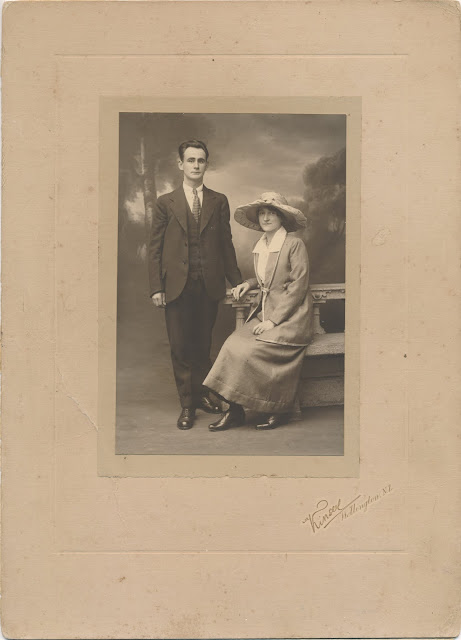 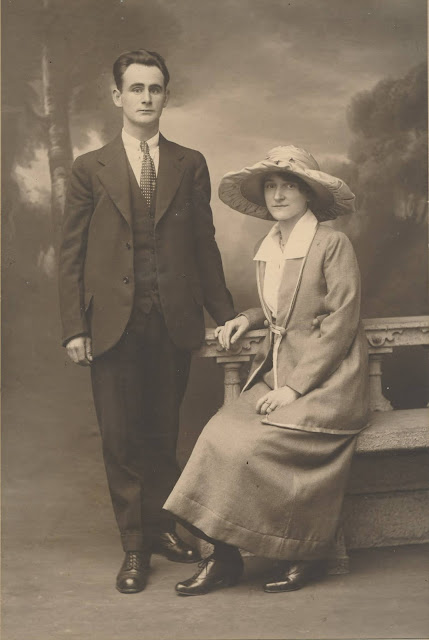 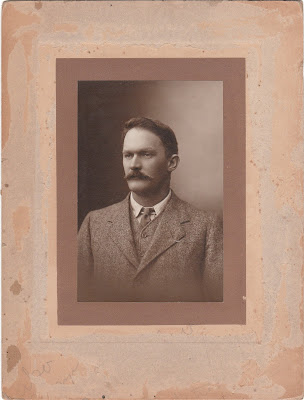 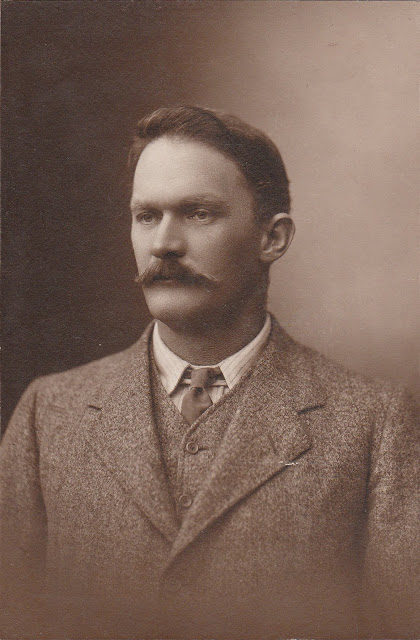 I hold an old, clear photograph taken by Kinsey of a woman with a tatted or crocheted collar and cuffs on her dress. It is likely a member of the Tait family. I don't want to throw it out. Anyone interested? email cgbassett@gmail.com