Fine Arts Copyright Act, 1877. — Chas. Monkton was charged with a breach of the Fine Art Copyright Act, 1877, by copying a work of Art—viz., a portrait of King Tawhiao, without the authority of the owner, John Blackman [he was the husband of Elizabeth Pulman], on the 16th of August.

Mr. Cotter appeared for the prosecution, and Mr. Edward Cooper for the defence. Mr. Cotter, in opening the case, said it was, he believed, the first case under this Act which had ever been brought before this Court. He quoted the 6th section of the Act, and then called the defendant as the first witness, but Mr. Cooper objected, and said the defendant was not a compellable witness. He submitted the case ought to be brought before the Court by information, and not by complaint, as the question was whether the Court had power to make an order for payment of money under the Fine Arts Copyright Act. He argued the matter at some length, and submitted that the matter was wrongly before the Court, and that if it was before the Court by information there was no authority to put the defendant in the box as a witness.

Then arose another point as to whether this was a criminal proceeding, in which case the defendant would be only a competent witness to go into the box of his own free will, but was not a compellable witness.

The proceedings were commenced on information, not by complaint. Mr. Cooper said that disposed of his friend's right to call the defendant. Mr. Cotter said it was only a slight error in striking out certain words in the form, and it was intended to proceed with it as a complaint, and he quoted authorities to show that the proceedings should be by complaint, as the word "complaint" was expressly used in section 8 of the Act.

After lengthy argument, His Worship ruled that defendant might be sworn. Mr. Cooper then quoted authorities to show that this was a criminal proceeding for an offence against a statute. Lengthened argument ensued on the point raised, and His Worship thought it better to go on with the case, subject to the point raised.

The defendant was then sworn, and deposed that he carried on business as a photographer in Auckland, and the country. His business premises were in Mr. Leighton's premises, Upper Queen-street, and he had 20 years' experience as a photographer. He now carried on his business under the style of the London Photographic Company. At the time the Maori King, Tawhiao, was in Auckland witness was in Hamilton, and did not take Tawhiao's photo, between February and April. He for a time employed another photographer, but discharged him as he did not find him competent. He was not aware that he sold portraits of Tawhiao to Mr. Fairs [Mortimer Fairs was the son of Thomas Armstrong Fairs the former partner of George Albert Steel the photographer who took the photograph of King Tawhiao], and he must have been away at the time they were sold, if they were sold.

A cabinet size photo of the Maori King on Mrs. Pulman's card and several carte de visite size on Mr. Monkton's cards were then put in by Mr. Cotter. Witness said he should say that the photos, on the smaller cards were copies of the larger one, and the writing on the back of the former was his, but he was in the habit of putting his signature to the cards before the pictures were put on. He could not say whether the smaller photos, were the work of his assistant.

John Blackman deposed that he was the proprietor of the photo of Tawhiao. It was taken by his manager, Mr. Steel, and duly registered under the Copyright Act, 1877, in April last.
— Mr. Leighton deposed to leasing the premises to Mr. Monkton, in which he carried on his business as photographer.
— Mortimer Fairs deposed to buying photos, of the Maori King from Mr. Monkton personally, for which he paid 4s 6d.
— Frederick Pulman deposed to buying some copies from Mrs. Monkton.
— George Alfred Steel, photographer, deposed that the smaller portraits were undoubted copies of the larger one which he had taken.
— Mrs. Monkton and Miss Monkton also gave evidence, and His Worship reserved judgment. 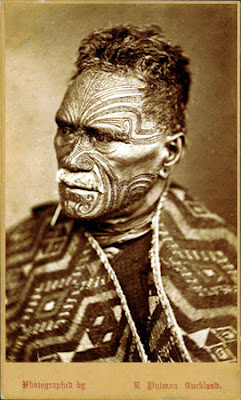 THE PORTRAIT OF TAWHIAO.
Judgment,
In the complaint, Blackman v. Monkton, in which defendant was charged with a breach of section 6 of the Fine Arts Copyright Act, 1877, in having made a copy for sale of a photograph of King Tawhiao, which complainant had registered, several points were raised by defendant's counsel (Mr E. Cooper) and argued; namely, it was objected that the proceedings should have been initiated by information instead of by complaint; also that defendant could not be compelled to give evidence, as the matter before the Court was a criminal summary proceeding, charging the commission of an offence punishable by a pecuniary penalty as mentioned in sec. 8 of the new Justice of the Peace Act, and that the registration was informal and inoperative, so that there was no copyright to infringe.

In this, however, His Worship could find no particular wherein the registration fails to comply with the requisition of the Act. Another point was this, the evidence did not shew that defendant had made any copy, even though shewn that he had sold. Even if the evidence established that defendant had made the copies for sale, it did not appear that the making was after the date of registration.

His Worship thought this objection a fatal one, and dismissed the case, remarking that if defendant liked to say where he got the portrait, he would give him costs.