Parents should take warning as to the danger that exists in allowing children to use shooting irons of any kind in the public streets from an incident that occurred on Saturday last. A small boy discharged a pea rifle at the early train for Wanganui as it was passing the Alexandra-street crossing. The pellet crashed through a carriage window and inflicted a nasty cut on the hand of a passenger, Mr Lewis, manager of Mr Bunting's Feilding studio. A prosecution will probably arise out of the incident.
Manawatu Times, Volume XXVII, Issue 7685, 30 March 1903

Mr J. E. Lewis having taken over Mr Bunting's photographic business in Feilding, notifies in our wanted column that an artistically finished enlargment [sic] will be given to every cash customer during June. Mr Lewis' work is of such a high standard and so favourably known that any comment by us is quite unnecessary.
Feilding Star, Volume XXVI, Issue 290, 1 June 1905


In another column Mr Lewis cordially invites everyone to call and inspect his studio. Mr Lewis has spared no expense in perfecting his studio, which, with the addition ot new accessories and improved lighting, is now one of the most up-to-date in the Colony.


Mr Lewis announces in another column that, while his new premises are being erected, he is prepared to take photographs in any part of the district. Judging from specimens of his work that we have seen, we have no hesitation in saying that his out-door work is of the same high standard as the work done in his studio previous to the fire.


We draw the attention of our readers to a set of views of Feilding taken by Mr Lewis, and now on exhibition in Messrs Milson and Coles' window. They are beautifully taken and reflect great credit on the workmanship of Mr Lewis. We have no hesitation in saying that they are as fine a collection of Feilding views as we have seen. Orders may be left for the same at Messrs Milson and Coles' shop.


In our wanted columns, Mr J. E. Lewis calls the attention of our readers to the fact that be is re-starting business as a photographer, in his new studio, in a few days time. The premises are being erected after the latest designs, and when finished will be one of the most complete in the Colony.


Photography
Today we had the pleasure of inspecting Mr Lewis' new photographic studio in Mr J. Cobbe's new buildings adjacent to this office, and have no hesitation in stating that it is one of the most up to-date studios which we have been privileged to visit. Great care has been taken to have the rooms constructed on the latest modern principle, and every attention has been bestowed upon the conveniences for patrons. The studio, which is a lofty and well decorated room, is fitted with the latest lighting devices, so that the operator can adjust the light as desired. The back grounds, which have been imported from Home, are the work of English artists, and are exceedingly fine pieces of workman ship. Some idea of the dimensions of the studio can be gathered from the fact that it will easily permit of a group of 50 being photographed. At the entrance to this room is the ladies' room, which is well furnished. On the other side is a small dark room for changing plates, etc. The front portion of the building is divided into two large rooms, one to be utilised as a workshop and the other as a dark room. The fittings here leave nothing to be desired. The qualifications of Mr Lewis as a photographer have become widely known since he has been established in Feilding, and his former clients are invited to call and inspect his new premises, where a example of his neatly-executed work is on view, more especially his new departure in coloured photographs. Mr Lewis Will be ready to receive patrons on and after Friday next.


One of the prettiest and least known sights in the Apiti district is a lake about seven miles from the township surrounded with dense bush. Mr Lewis, photographer, of Feilding, was successful in the holidays in obtaining several views of this lovely spot, and the still water reflecting the varied foliage makes a beautiful picture.


Mr Hobday's Studio.
Yesterday Mr B. Hobday took possession of the photographic studio of Mr J. E. Lewis, who is leaving Feilding. Mr Hobday, who has won a first-class reputation as a photographer of outdoor subjects, has now added portraiture to his specialities. His studio, between the Star office and Mr John Cobbe's shop, has an up-to-date equipment for all kinds of indoor work. During the first month of his new business, Mr Hobday is offering a gift of one enlargement for every order given for one dozen cabinet portraits.
Feilding Star, Volume VIII, Issue 2078, 20 May 1913 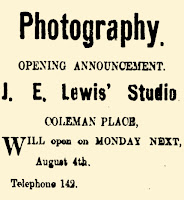 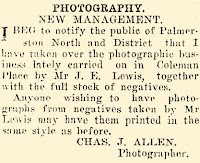 Mr J. E. Lewis, who has returned from active service, has repurchased his studios in Coleman Place. During his absence of nearly three years Mr Lewis has had an opportunity of visiting the leading studios in England, Scotland and France, and hopes to be able to give the public the benefit of his added experience.
Manawatu Standard, Volume XLIII, Issue 1655, 22 October 1919 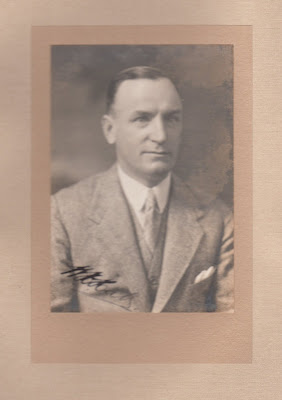 
The Late Mr L. L. Lewis — We greatly regret to learn of the death at five o'clock yesterday afternoon, of Mr L. L. Lewis, so long and so well knownin Blenheim and Picton. Mr Lewis came to Marlbbrough in 1860, and began running a coach between here and Picton as early as the following year, at which date the roads were as yet in an unformed condition. Nothing could have exceeded his kindness and attention to passengers. He had many a narrow escape from flood. Three different time's, in crossing the approaches to the Opawa river when it was in a swollen state, he and the coach and all were washed down stream, and brought up each time by a willow standing in the stream, that was then called Lewis' Willow. On the third of these occasions he was only rescued by tbe courageous conduct of Mr Kissling, the Manager of the Bank of New' Zealand, who swam out to him, and by putting a rope round the pole of the coach enabled it to be dragged ashore. Mr Lewis frequently made the journey to and fro twice in a day, until be finally gave up the road on the opening of the railway. During the whole time he had the Picton coach he carried on the dancing classes with which his name has been associated up to the time of his decease. He was generally known as a caterer at suppers, dances, and so forth, and will be missed by a large number of persons, both adults and juveniles. He leaves a family of seven children, for whom we are sorry to say there is no provision. The funeral will take place to-morrow afternoon.
Marlborough Express, Volume XVI, Issue 139, 17 June 1881


The Funeral of the Late Mr L. Lewis. — The remains of the late Mr Lewis were interred last Saturday afternoon. The coffin was preceded to the grave by the Ven. Archdeacon Butt. Mr Lewis being a Jew, the Archdeacon did not read the English Church burial service, but confined himself to reading from the Psalms some of those beautiful passages having reference to the brief and troubled character of human life, and to offering up a short prayer for the restoration of Israel. Mr Lewis was always fond of flowers, and his three children each threw a bouquet into the grave at the conclusion of the simple ceremony. The age of the deceased was stated on the coffin-plate to be 67. R.I.P.
Marlborough Express, Volume XVI, Issue 141, 20 June 1881