Frederick William Bunting was born about 1868 at Waipawa, New Zealand. This birth appears not to have been registered, however it is known that his sister Susanna or Susanne Bunt's birth was registered in 1866 which gives her parents as William and Catherine Bunting. He died 12 November 1913 Palmerston North aged 45 years. Married 12 April 1902 at the residence of Mr. W. T. Wood, (Major of Palmerston North) to Marie Eliza Stevenson the eldest daughter of  George Stevenson of Croydon, England (1), following her husband's death she married in 1918 Samuel Richard Allan Geange. Catherine Bunting died in Napier in December 1912. Susanne Bunting married in 1890 to Frederick William Hoddinott, a teacher, they were the parents of Gwendoline Gretchen Hoddinott, M.B.E., for 23 years Dominion Secretary of the Plunket Society.


Good News
To meet the increasing wants of the people of Palmerston for high-class photographic work, I have taken into partnership Mr T. W. Bunting [sic]. Mr T. W. Bunting has been about nine years engaged in photographic work, and during that time has been employed in the studios of Messrs Wrigglesworth and Binns, Price and O'Malley, Wellington; Eden George, of Dunedin; Carnell, of Napier, and for the past few years at Woodville. His portrait work for softness, grace of pose, naturalness of expression and perfect finish is acknowledged to be fully equal to best Wellington productions. Sitters will find every comfort at the studio, which has been refitted. Billens and Bunting, Photographers, Palmerston North.
Feilding Star, Volume XIII, Issue 56, 7 November 1891


Mr F. W. Bunting, photographer, opened his branch business, next Star Office, to-day. Mr Cobbe has had the building renovated and made suitable in every way for the business, and we have no doubt Mr Bunting will receive a fair share of public patronage, especially as his work is second to none in the colony.
Feilding Star, Volume XVI, Issue 111, 5 November 1894, Page 2


There is on view in Mr F. W. Bunting's photograph studio a photo of the Feilding Salvation Army Band, which was presented to Mr Samuel Daw by the members of the Salvation Army as a recognition of his services in training the band to its present state of proficiency.

The photo bears the following inscription;—"Presented to Mr Samuel Daw by the members of the Feilding Salvation Army Band as a thankful recognition of very valuable services to them."

The presentation was made on June 14. The photo frame is in itself a work of art, being made of 574 pieces of New Zealand wood — rimu, white pine, totara and totara knot — and is the handiwork of Mr J. B. Davy. 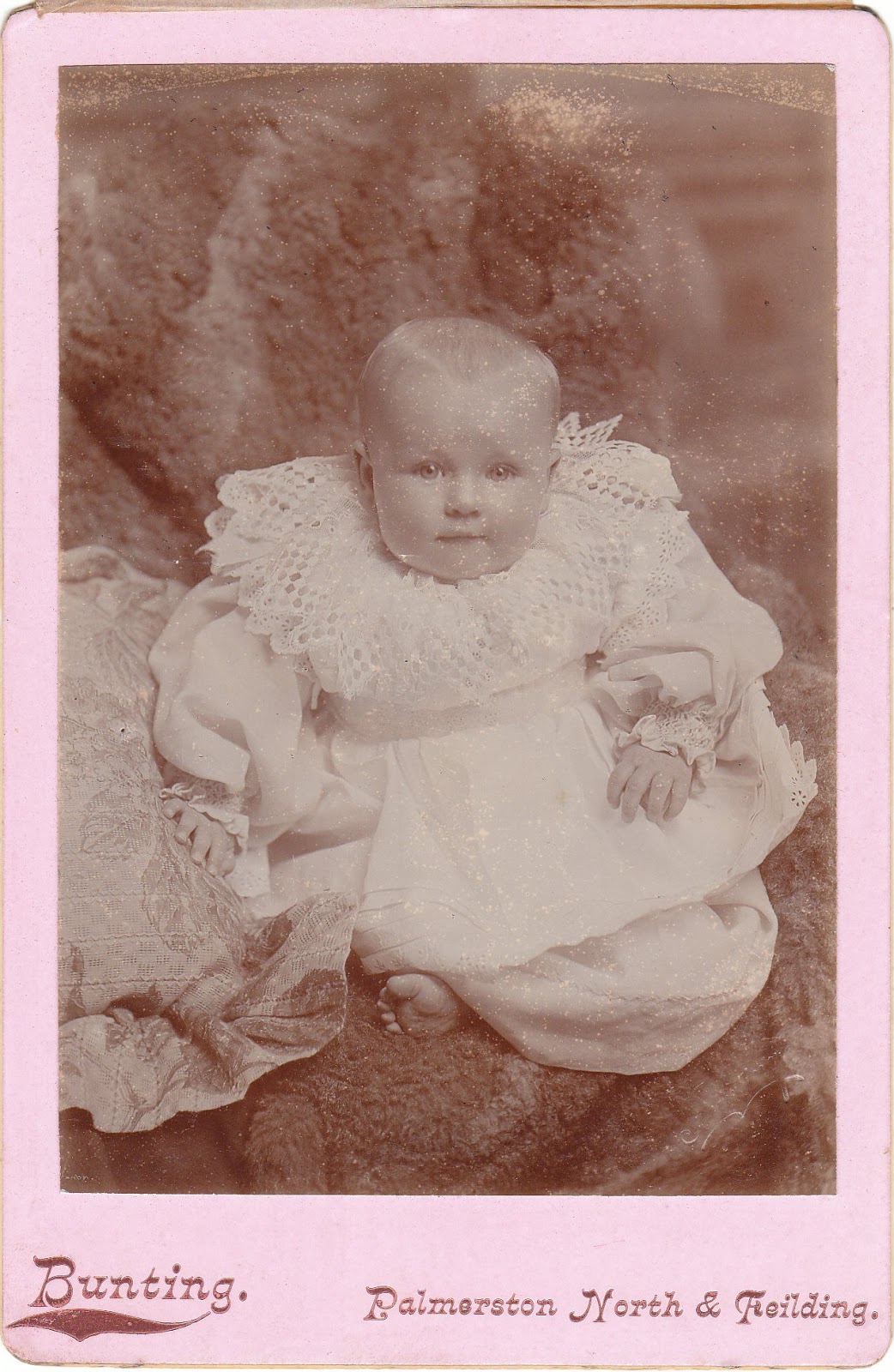 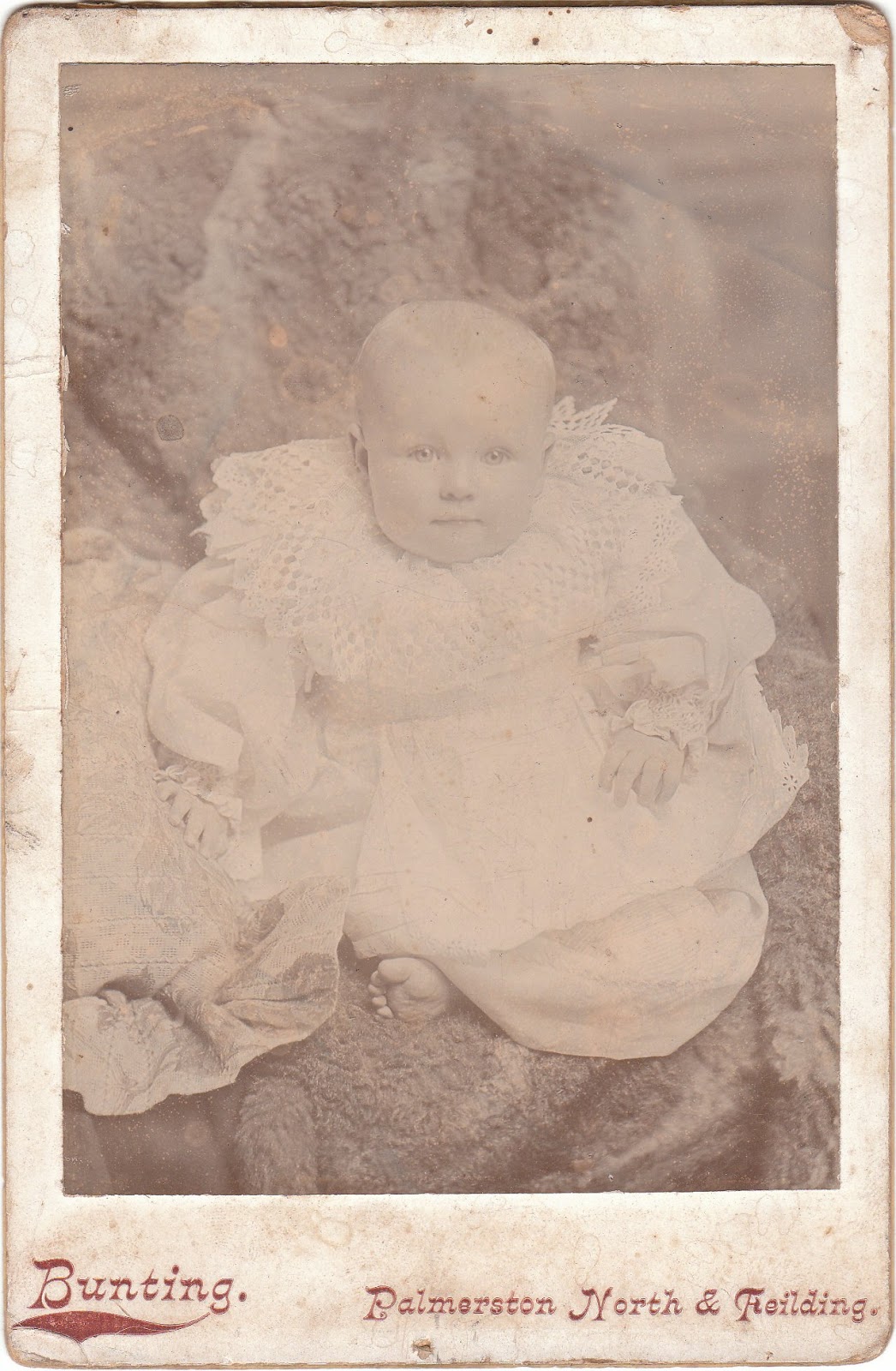 The ceremony was performed by the Rev. S. J. Baker in the presence of the immediate relatives of the contracting parties. The bride was attended by little Misses Reki and Louie Wood, as bridesmaids, and she was given away by Mr W. T. Wood. Mr C. H. Warden was present in the capacity of best man. Mr and Mrs Bunting left for the North by this afternoon's train. They have the best wishes of their many friends for their future happiness.


Town Improvements
A complete transformation has recently been effected in the photographic premises of Mr F. W. Bunting in Manchester Street, the old shop having practically been replaced by a large two storied building designed on elegant proportions and possessing a handsome and well finished appearance.

The interior arrangement of the new building are laid out with a view to affording every facility to Mr Bunting in the different branches of photography he undertakes, as well as providing for his patrons both convenience and comfort. The vestibule leads into a bright and well arranged waiting room from which the staircase passes to the studio above.

Leading off from the waiting room is a dressing apartment, specially fitted up and furnished for the use of patrons, while in the rear of the building, are a well lighted room for finishing purposes, and the usual dark room.

The studio is a special feature of the new building and one in which every attention and care has been observed in order that the best results can be obtained. It is luxuriously furnished and fitted up with the latest appliances necessary for the production of high class photography, including some fresh backgrounds from the brush of leading English and American artists.

The studio, which comprises a floor measurement of 32 feet by 17 feet 6 inches, is lighted by a large skylight on the Wade principle comprising some large panes, the light being toned down to a nicety by a set of blinds introduced for the purpose.

The convenience of the operator is materially assisted by a handy changing room leading off the studio. A new invisible shutter has been fitted to the studio camera, the operation of which is found to be greatly superior to the old cap system, especially in photographing children.

Mr Bunting is at present on his way out to the colony from a visit to the Old Country, and he is bringing back with him all the newest styles and improvements in modern photography which he intends to introduce into his Feilding studio.

Mr L. T. West, of Palmerston North, designed the building, and Mr W. Wilkinson was the contractor, carrying out the various works in a faithful and satisfactory manner. 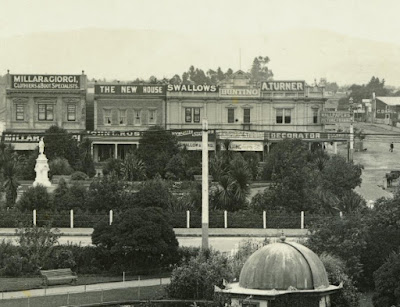 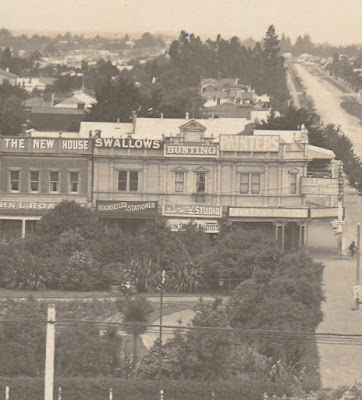 BUNTING'S NEW STUDIO. Mr F. W. Bunting, the well-known photographer, of Palmerston North and Napier, finding that his business was increasing to such an extent, has for some time past been busy completing arrangements for the opening of a new studio adjoining A. Turner, painter, the Square, and is now conducting his business there.

The new promises, which are up-to-date in every detail, consist of a large vestibule, set off with nicely-painted showcases, in which are displayed photos of patrons from all parts of the Dominion. From the vestibule the visitor is shown into a very nicely-furnished reception or waiting room, off which are situated two store-rooms and a very cosy office.

At the rear of the reception room a very fine studio has been fitted up, in which will be found all the latest apparatus and appointments appertaining to photography. The studio is lighted by Wade's patent skylights. Off the studio are situated two very nice dressing rooms, a dark room, re-touching room, etc. The work-room is situated at the rear of the building. Provision has been made upstairs for a workroom.

Mr Bunting's private living rooms are also upstairs. The whole of the arrangements have been carried out under the personal supervision of Mr Bunting, who is to be congratulated on the excellent taste he has displayed. The work in connection with the additions and alterations has been carried out in first-class style by Mr C. Blackbourn (building) and Clark and Thompson (painting).

Mr Bunting has just opened up a large stock of the newest designs in photo mounts. Photo-framing will still be a feature of the business, and customers will have the choice of a splendid selection of mouldings. The new studio is now open for inspection.
Manawatu Standard, Volume XLI, Issue 8637, 18 July 1908, Page 5 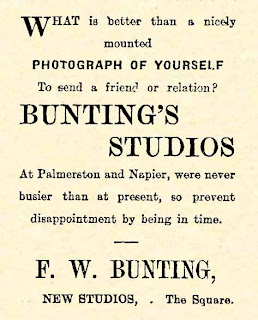 The news of the death of Mr F. W. Bunting will be received with genuine regret by residents of Palmerston and surrounding districts. The late Mr Bunting had not enjoyed good health for some time past. Some eighteen months ago he was obliged to relinquish business and take a trip to Sydney, which trip was beneficial for the time only.

Two weeks ago he was taken to a private hospital in a precarious state of health, and on Saturday last returned to his home, where he passed away early yesterday morning.

The late Mr Bunting was born at Waipawa 45 years ago this month. He came to Palmerston, where he was engaged in the photography business with Mr H. Billens, over 20 years ago.

In 1894 the partnership was dissolved, and Mr Bunting had since then carried on his business on his own account. Mr Bunting was married in 1901 to Miss Stevenson, daughter of Mr Geo. Stevenson, a well known resident of the West Coast. Besides his widow, Mr Bunting leaves an only sister Mrs Hoddinott, of Queenstown, South Island. To these the sympathy of the community will be extended in their sad bereavement. 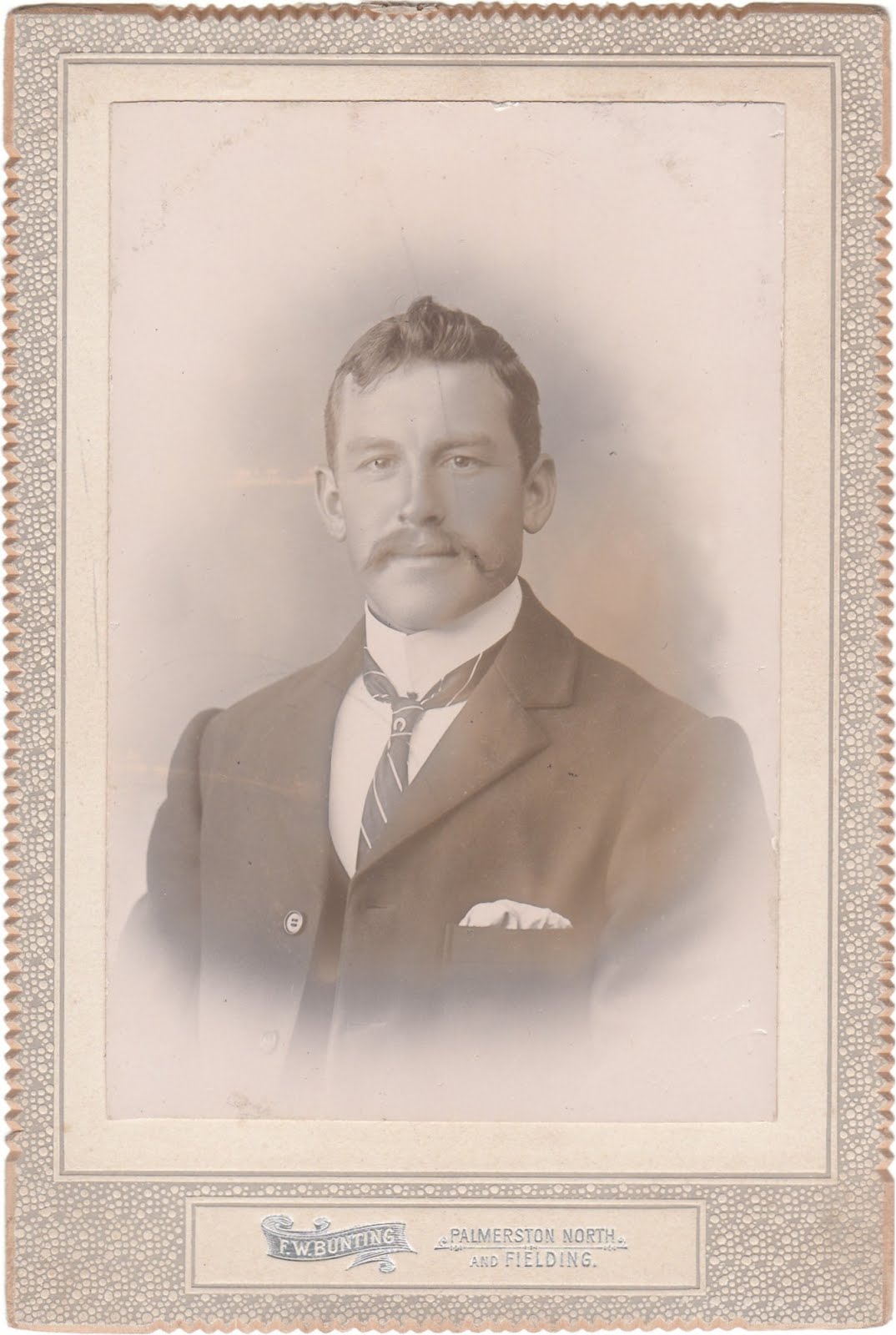 above: portrait of an unnamed man by F. W. Bunting. 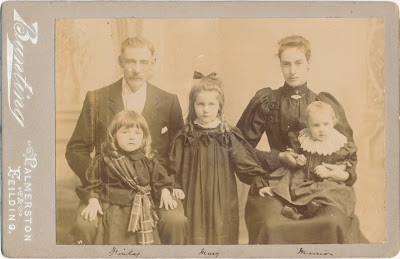