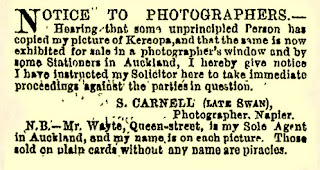 
It will be observed by a notice in our advertising columns that the improvements in Mr Carnell's photographic establishment are not yet complete, and that the studio will not be open for some days. They have been delayed, we understand, by the recent bad weather.

The improvements are of a very important character. They embrace a new studio window on Mr Vanderweyde's principle. In the Photographic News the patentee describes it as follows:

The invention consists in so placing each pane of glass that the direct rays of light passing through it to the sitter or object to be photographed shall traverse the glass as nearly as possible at right angles to its plane. In photographic studios as at present constructed, the greater part of the light passing in the direction of the sitter traverses the glass more or less obliquely, the angle varying with the distance of the glass from the sitter. It is obvious that the light must traverse more than the actual thickness of the glass, and must therefore be obstructed by absorption and by reflection to a greater extent than if it passes through the glass at a right angle. The advantage of the invention is to reduce the time necessary for exposure, and to give to the image obtained greater roundness, vigor, delicacy of modelling, and point."

The frame of the new window arrived to Mr Carnell's order by the Fernglen. It was manufactured by Messrs Marshall and Hatch of London. It is, we may further mention, reversible. The relative positions of the sitter in the camera can be changed, so that in this way a subject can have his choice as to which side of his face he will have the brighter light thrown on. 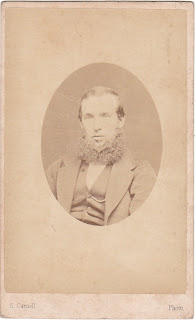 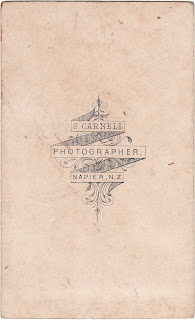 Mr Annabell has left at our office a portrait of Sir Donald M'Lean, taken from a photograph by Mr Carnell, said by Sir Donald to be the best he ever had taken. We have also seen two others by the same artist the Rev. W. Marshall and his good lady, to be left for a short time at Mr Cam ell's studio.

Portraits in oil painting may now be obtained without the long sitting formerly required. Mr Annabell only requires a good photo (or what would be best, an enlarged photo by Mr Carnell), and five minutes in the company of the person to be painted, and he guarantees a correct likeness, or, in the absence of the person to be painted, a good description, with color of hair and eyes, with photo.

Mr S. Carnell
Begs to inform his patrons and the public generally that his establishment is re-opened. The new studio window being now complete, he has every facility for producing portraits of a class never before equalled in Napier.

Thanking the public of Napier for their past patronage, he assures them that it will be his endeavor to render every satisfaction to all who may visit him in the future. 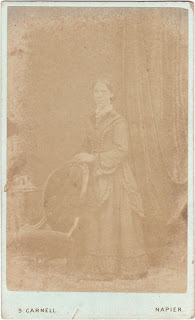 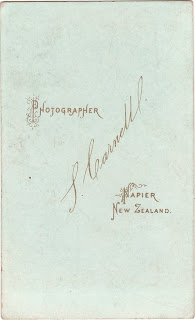 Mr Carnell, we notice, has now in operation the patent concentrating studio window, of which we gave a description a short time ago. The effect is certainty a great improvement on the ordinary method, the photographs presenting the appearance of being brought out in bold relief.

In one of the numbers of the Photographic news there is a letter to the patentee, Mr Vander Weyde, from Mr A. E. Fradelle, the photographer of Regent street, London, in which the studio window is very highly commended. Mr Fradelle says: "In accordance with your desire, I have now great pleasure in sending you my report on the qualities of your new patent studio window. After three weeks' trial, I am of opinion that my negatives have to a great extent more stereoscopic effect, and are more solid and brilliant than heretofore. The specimens I can show you will bear out the proof of my assertion in comparison with my former work. This system of lighting is peculiarly suitable for Rembrandt effects. On many occasions I have taken excellent pictures at a very late hour of the day."

Three oil paintings by Mr Annabel are on view at Mr Carnell's studio, and will well repay a visit, being portraits of Mr John Heslop, senr., Mr Wilkin, manager of the Grange property, and Dr Hitchings. The two latter are colored enlargements of photographs, and the result produced in this manner is very exact to life indeed.

Mr S. Carnell, the well-known photographer, has leased the land in Tennyson street, between Messrs Banner .and Liddle's stores and Mr Sainsbury's offices, and purposes erecting a large photographic establishment on the site, the material to be either of concrete or timber.


Mr S. Carnell, photographer, has received the second order of merit at the Melbourne Exhibition.


Mr S. Carnell yesterday opened his new photographic studio in Shakespeare road, in the premises recently occupied by Mr Cassin. He has had the place re-fitted and made most convenient for the uses of a photographer.

There are waiting-rooms and retiring-rooms for ladies, and all the accessories of a complete establishment. The studio has been erected behind the main building, and the Vanderweyde patent windows have been repaired and utilised. The room is 17ft wide by 35ft long, and is, we believe, the largest studio in the Australian colonies.

Determined to protect himself as far as possible from another disastrous fire, Mr Carrell has also built a brick strong-room for the reception of his more valuable instruments and appliances. We wish him every success in his new start in business. 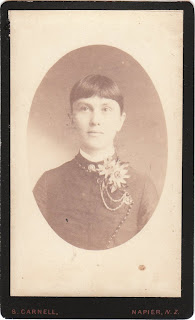 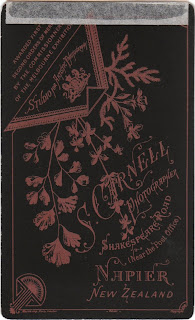 CARNELL, S. (NAPIER). Mr Carnell, who succeeds Mr Swan as Napier's representative, is a photographer here and an old resident. He is a member of the Harbour Board as a nominee of the present Government, and was among the last batch of J.P.'s. He is also a member of the Charitable Aid Board and Hospital Board. He is a fluent, rapid speaker, of extreme Radical views, verging on downright Socialism. He wants to see the present land tax very much increased until all the large estates are burst up. He is, however, out of politics a genial, though excitable man, but very suspicious of the motives of those opposed to him.


Mr and Mrs Samuel Carnell, of Napier, have celebrated their diamond wedding, having been married at the New Radford Church, Nottingham, on May 24th, 1858. Mr Carnell has had the honour of being Mayor of Napier on several occasions, and also represented the town in Parliament for three years.

He was born in Nottinghamshire in 1832 and arrived in New Zealand in 1862. He went to Napier in 1869 after taking part in the West Coast gold rush and setting up in Nelson and Auckland as a photographer.


An old resident of Napier, Mr. Samuel Carnell, died yesterday afternoon, aged eighty-eight years. Deceased, who was Mayor of Napier in 1904 and 1905, was born in Nottinghamshire, and reached Auckland in the ship Caduceus in 1862. He resided in Auckland till 1865, when he went to the goldfields at Hokitika. Later he went into business as a photographer at Nelson and Auckland, and removed to Napier in 1869.

Deceased won the Napier seat in the Liberal Party's interest in 1894. He was also a member of local bodies, and was a Freemason. 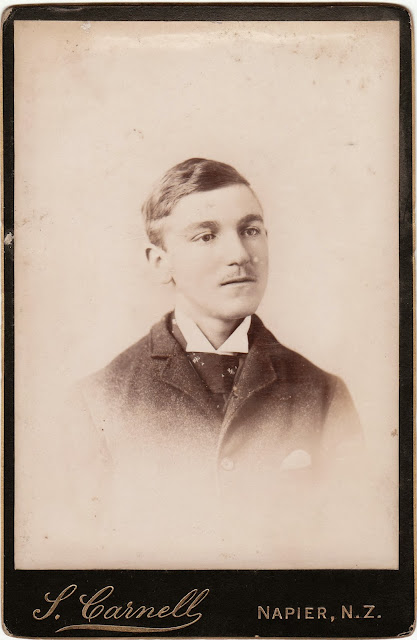 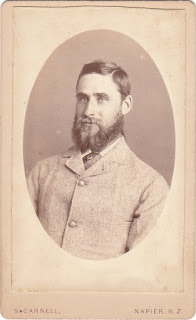 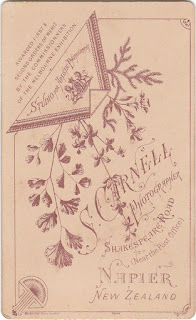 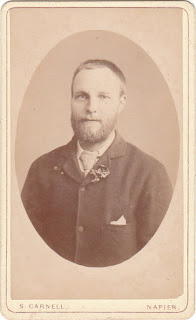 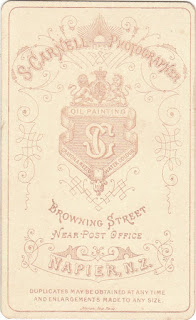 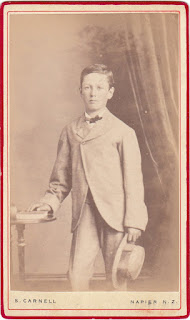 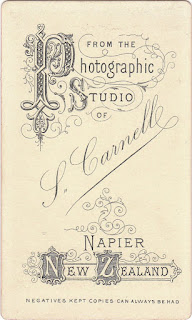 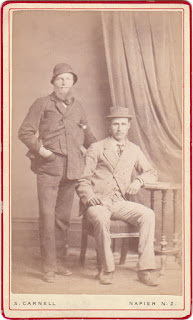 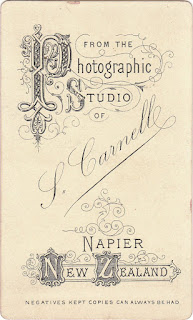 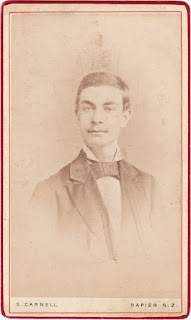 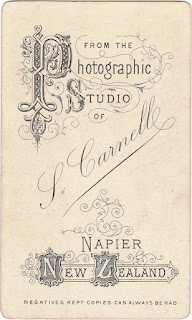 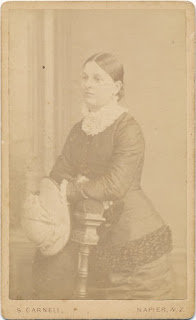 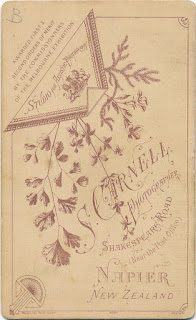 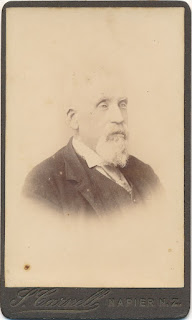 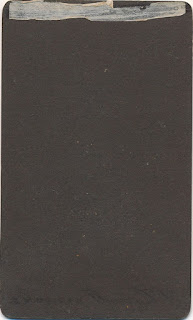 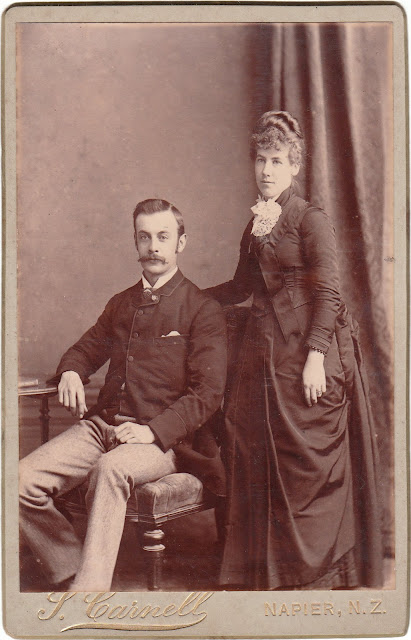 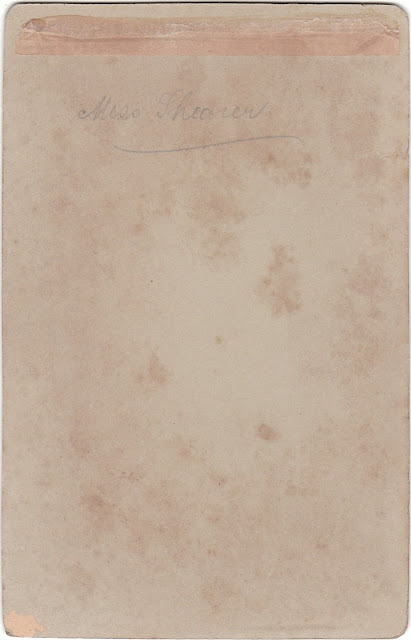 I have a photograph attributed to J. Carnell of Napier. It is of a relative who died c.1930. It is in great condition and shows the quality of the Carnell Studio. I presume that the J. Carnell is a son of S. Carnell. Frank Mason Lismore