Frank Denton
(Wanganui Photo Fiend)
A well-known Wanganui camera fiend,
He took to the art the day he was weaned
And the photos he takes
Are no failures or fakes,
But the prettiest pictures that ever were screened.
NZ Truth, Issue 610, 24 February 1917, Page 8 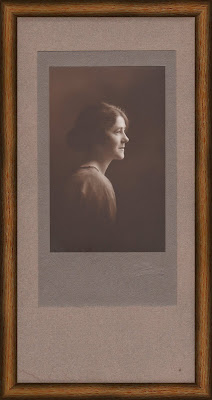 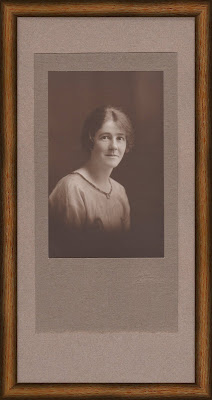 Wellington Camera Club - First Annual Exhibition - June 1894.
Mr. F. Denton, another of the Club's prize winners, has some excellently composed and executed bush scenes admirable little pictures some of them.

At the Camera Clubs second annual exhibition in 1895 the Evening post reported that - Mr. F. J. Denton is a large exhibitor, and shows some clever work. It includes a singularly picturesque view of Wellington, taken from the residence of Mr. Denton. "Caught in the Act" is a very clever subject picture depicting a young lady caught by two companions smoking a cigarette. It is full of life, and technically and artistically very fine work. Another striking picture is a study of an amateur barber at work, in which the "barber" was Mr. F. J. Denton, who operated camera and scissors simultaneously... There is a very fine flower study by Mr. H Snodgrass (127), and Mr. F. Denton has also a good example (67).

The Wellington Camera Club's photographs were sent to Christchurch and exhibited at a meeting of the Photographic Section of the Philosophical Institute:

The "Bush Barber," by Denton, is a very good bromide enlargement, good from the technical point of view and from the pictorial. The poses are natural even down to the little black kitten sitting at the foot of the victim in the bands of the tonsorial artist...F. Denton, amongst other things, sends a bromide enlargement of a bouquet of flowers. Bromide enlargements seem very popular with our Wellington cousins, seeing that the majority of pictures sent consist of this favourite form of printing. This picture is one of a vase of wild flowers, which are so arranged as to give an air of abandon. The effect is very pleasing, though, on close examination, it will be found that the colours of the flowers have been poorly translated into the grey of the bromide print. Space forbids the criticism of the other pictures, which were far the most part excellent.

In 1896 Denton exhibited his photographs at the Hokitika Horticultural Society's flower show. He won five prizes; first prizes for photographs of roses, a basket of flowers, a spray of any kinds and a special prize for the best photograph of lillies. He won a second prize for a photograph of a native tree. 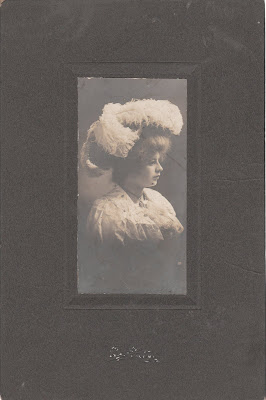 In 1897 at the Wellington Camera Club's Exhibition Frank Denton took both the first and second prizes in the catagory for landscapes or seascapes, he also picked up some second or highly commended prizes for animal life, still life, lantern slide and architecture photographs. He received the first prize for enlargements.

Mr F. J. Denton, who has lately bought Mr A. Martin's photographic business, will have a most interesting display of his work at his premises this morning. Mr Denton is an artist of artists in his profession, and some of his work is worthy of being placed among the leading photographic collections of the world. There are examples of still life, figures, animals and landscapes in bromide, carbon and platinotype. Mr Denton has been a successful exhibitor, and at the International Photographic Society of India's exhibition in 1898 obtained one of the ten bronze medals for excellence. A visit to the studio will well repay everybody in search of the beautiful in photography.

Public Notices.
Notice.
All accounts due to me may be paid to my successor, Mr Frank J. Denton, whose receipt will be sufficient discharge.
A. Martin,
Photographer,
Wanganui.


Photographic Business Notice.
Martin's Studio, Wanganui.
IN Returning thanks to my friends, and the Residents of the district for the very liberal patronage they have accorded to me as Photographer during the past eighteen years, I would inform them that I have this day sold my Photographic Business to Mr. Frank J. Denton, of Wellington.

I have every confidence in Mr Denton as a capable and worthy successor, and would express the hope that my patrons will extend to him a continuance of that support with which I have so long been favoured.
A. Martin.
Wanganui. October 16th, 1899.

Referring to the above Notification of Mr. Martin's, I would say that all Negatives of Portraits and Landscape Views taken by him during the past eighteen years have been carefully preserved, and that additional copies from these may be had from me at any time. No effort on my part shall be spared to merit a continuance of the patronage hitherto accorded my talented predecessor, whose photographic productions are so well known throughout the colonies.
Frank J. Denton.
Wanganui. October 16th, 1899.
Wanganui Chronicle, Volume XLIII, Issue 15000, 24 October 1899, Page 3 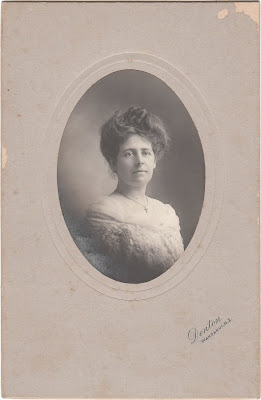 above: Portrait of an unnamed lady by Frank James Denton 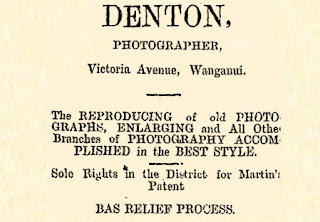 Mr Frank Denton, who has been on a visit to the Auckland district on a very important mission, has returned to Wanganui with — Mrs Denton, nee Miss Laura Close, eldest daughter of Mr Jas. Close, of the Bay of Islands. We offer our hearty congratulations to Mr and Mrs Denton. 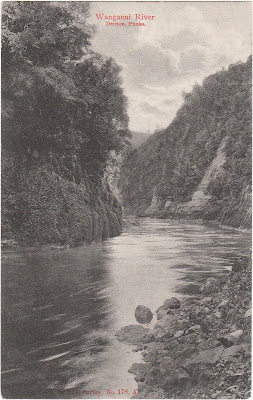 Wanganui River
Denton Photo
Ferguson and Taylor no. 178 A.


Wanganui Show 1902
F. J. DENTON. Although no special provision was made for exhibits of an artistic nature, Mr. Frank J. Denton has made the most of the end of the Permanent Shed with his exhibit of photographs. Enlargments are naturally the special feature, as small, photographs would be lost in the hanging space at his command. These range from 40 inches by 24 inches down to the usual 15 inches by 12 inches, and show clearly that the work is carried out in a careful and thoroughly artistic manner.

Photographs of Sir Joseph Ward, Messrs. Baker, Lundon, and Willis (the three candidates for the Wanganui seat), studies of children and of groups are included in an exhibit which would grace the walls of an exhibition in any part of the Colonies, and must convince the visitors to the Show that they can confidently place their photographic work in the hands of Mr. Denton. 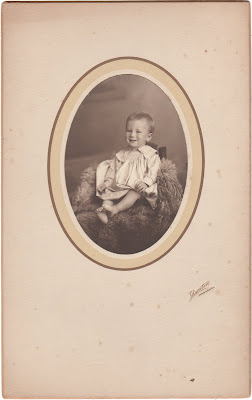 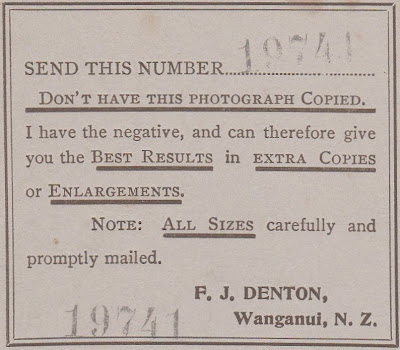 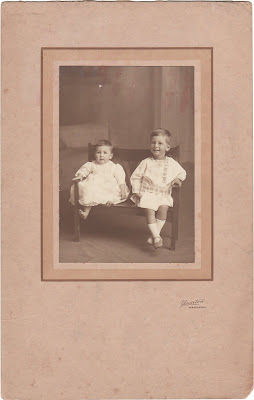 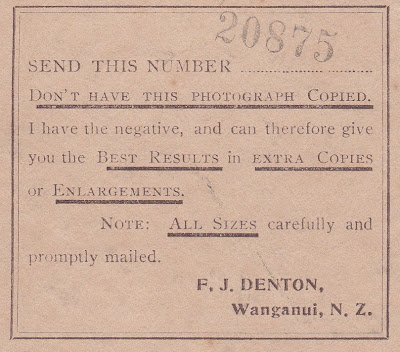 A former Wanganui photographer he retired from business in 1927. Since his retirement he has kept good health. His birthday will be marked by a family gathering and people from all parts of the Dominion will be present.

Mr Denton was born in Wellington on August 24, 1869. He was the son of Mr George Denton, a Wellington pioneer. Fifty years ago he arrived ­in Wanganui and set up business as a photographer in place of Mr Alfred Martin. He later moved to a site in the Avenue, which is now occupied by T. Metcalfe. This building was one of the first to be erected between Maria Place and Guyton Street on the area of land where the Presbyterian Church formerly stood.

Mr Denton is a gold medallist and has exhibited photographs through the world. His photographs have been reproduced in "Phonograms of the Year," a world-wide publication which features the best of photos taken each year. He also judged at numerous photographic competitions.

Mr Denton secured photographic exhibitions for the Sarjeant Gallery, in which he has always taken a keen interest. The gallery was the first in New Zealand to have specimens of work by leading photographers.

Mr Denton is a trustee of Trinity Methodist Church and was recently elected a life member of the Arts and Crafts Society.

Among those visiting Wanganui for the birthday celebrations are his son Mr H. M. Denton (Auckland) and his daughters, Mesdames W. R. Powell (Halcombe) and A. E. Marshall (Palmerston North).
http://horowhenua.kete.net.nz/site/documents/show/1669-denton-family-obituaries-and-clippings 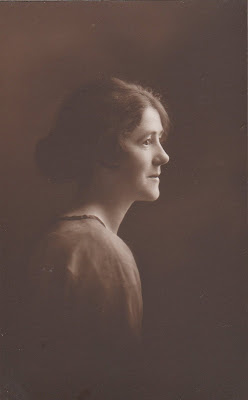 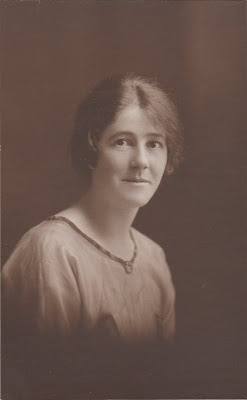 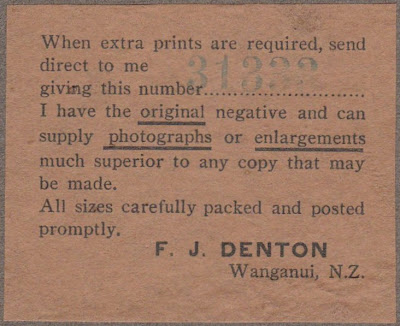 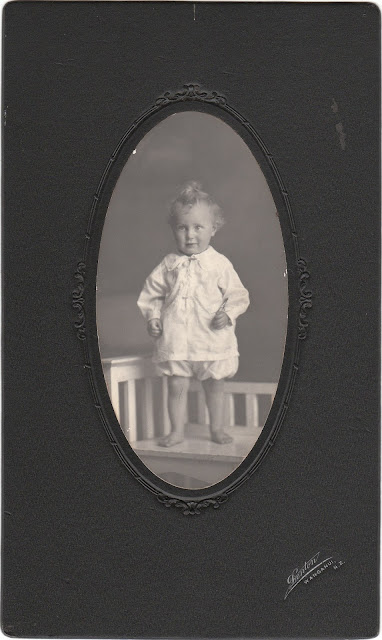 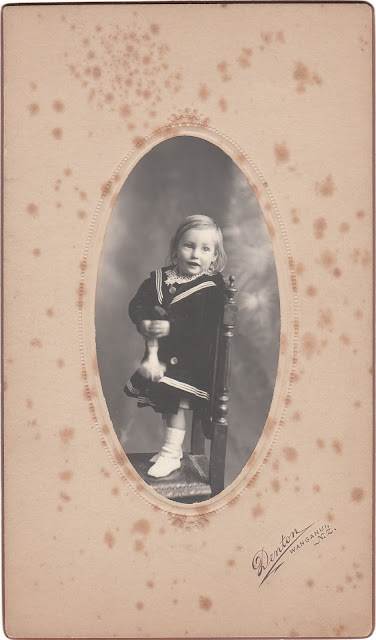 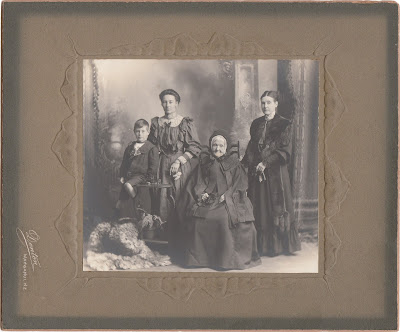 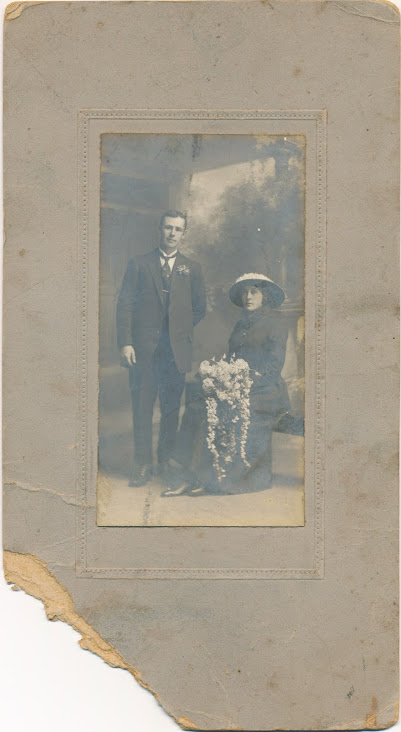 Posted by Early Canterbury Photography at 11:17 AM

Whoever is behind the upkeep of this blog, is worthy of applause. Thank you!

Thank you for this wonderful info - FJ Denton was my grandmother's father.
Fiona Powell

Hello Fiona, I believe your great grandfather was aged 93 years old when he died in 1963 - perhaps you might have met him?

I have just found this site. F J Denton was also my great grandfather. Fiona is my younger cousin. He had passed away before she was born. I was about 18 months old when he died. It is always interesting to find out about Frank. There are several family members who have an interest in photography, so the genes have been passed on!! His great, great granddaughter is actually studying photography at Emily Carr University in Canada.

Hi, I was wondering if you know what happened to all the negatives of Frank Denton's, in particular the ones he inherited from Alfred Martin? I'm trying to track down a particular portrait done in Whanganui in late 1892 or early 1893. Btw this blog is amazing and has been very helpful with regard to the photographers of Whanganui in the 1890's. Thanks, Toni

hello - most early photographers negatives have not survived, if Denton's did survive they would most probably be in the local museum or at Te Papa. My guess would be that 1 negative survives for every 100,000 photographs taken.

Many thanks for the detailed information. I've just bought a large photo of Denton's and was looking for information about him. The photo may be from the 1902 exhibition. It's large, on it's original mount. It's of the Apiriwa gorge on the Wanganui river, with a maori girl in a waka with two huia feathers in her hair in the foreground & another dug out full of men to the far side. I think it's a bromide print from the colouring