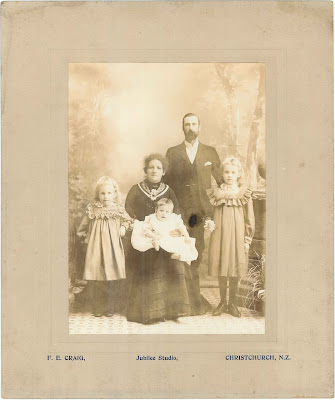 above - an unknown family photographed by Florence Craig


Florence Eugenie (or Eugene) Craig nee Preece was perhaps Christchurch’s first professional women photographer with a studio of her own. She was born in Birmingham, England about 1871 (1) the daughter of John Preece (2) a tailor and Emma Palmer or Pugh. The 1871 census shows the family at 89 Pershore Street, Birmingham, they arrived in New Zealand about 1874 or 1881.


Her engagement to William Alfred Craig was announced in the Observer on 22 October 1892:
The engagement is announced of Mr A. W. Craig, (sic) of Auckland, to Miss Preece, of Christchurch.


The marriage was announced in the Observer on Saturday, 13 January 1894:
The marriage of Mr W. A. Craig, younger brother of Mr J. J. Craig, and Miss Florence E. Preece, of Christchurch, was solemnized on the afternoon of Thursday last at the Pitt Street Wesleyan Church. A large number of interested friends were present to witness the ceremony, which was performed by the Rev. Mr Prior. The bride who had only arrived a few days previously from Christchurch, looked exceedingly nice in a very tasteful trained gown of fine crème cashmere finished with lace and sprays of orange blossoms. Her costume was completed with a small wreath of orange blossoms, from which fell a beautifully embroidered tulle veil and carried a lovely bouquet. She was given away by Captain Owles, of Christchurch, an old friend of the family, who was visiting Auckland on business.

The bridesmaids, four in number, were Miss E. Craig (first) and three tiny maidens, Misses Hilda Craig, Mr J. J. Craig's little daughter, Louie Bosser and Rita Moritzen. Miss Craig wore a simple and pretty dress of white muslin, the frills edged with fine lace, flowers in her hair and carried a handsome bouquet. The three little girls were daintily attired alike in pretty frocks of pale blue crepon, and large picture hats of drawn silk and chiffon lace, and each carried a pretty basket of flowers. Mr E. Craig attended his brother as best man. At the close of the ceremony the bridal party drove to the residence of Mrs Joseph Craig, mother of the bridegroom, where they were entertained at a sumptuous wedding breakfast, and in the evening a very enjoyable party was given in honour of the event.

Personal. — My Wife having left her home on her own account, without my consent, I will NOT be RESPONSIBLE for any DEBTS contracted by her, W. A, CRAIG. Auckland, 6th August, 1804.
Lyttelton Times, Volume LXXXII, Issue 10425, 15 August 1894, Page 1
Florence Craig returned to Christchurch soon afterwards. The 1896 electoral roll shows her as Florence Eugene Preece at 33 Kilmore Street, the home of father John Preece a tailor. Three years later in 1899 she is at the same address but shown under her married name of Craig. Her occupation is shown as an artist.
Maintenance. —The case against W. A. Craig, charged with having deserted his wife, Florence Craig, was adjourned till Tuesday. Mr Kippenberger appeared for the complainant, and Mr Deacon for the defendant.
Lyttelton Times, Volume XCVI, Issue 11025, 1 August 1896, Page 3
(Before Mr R. Beetham, S.M.) Maintenance.— W. A. Craig was charged with having deserted his wife, Florence Craig, and left her without adequate means of support. Mr Byrne appeared for the complainant and Mr Deacon for the defendant. The parties were married in January, 1894, and the complainant alleged that soon after that date her husband began to ill-treat her. In consequence of ill-health she came from Auckland to Christchurch, and she was afraid to return to the defendant. Evidence was also given by Drs Moorhouse and Campbell, and the Rev F. W. Isitt, after which the case was adjourned till 10 a.m. next day.
Lyttelton Times, Volume XCVI, Issue 11028, 5 August 1896, Page 3
Maintenance— Florence Craig applied for an order directing her husband William A. Craig to contribute to her maintenance. Mr Byrne appeared for the applicant, Mr Deacon for the defendant. The parties had been married in January, 1894, and had lived together in Auckland nearly four mouths. Mrs Craig then, on account of ill-health, came down to her parents in Christchurch, and had since declined to return to her husband. Her evidence now was that in about five weeks after the marriage he locked her out, compelling her to sleep in a washhouse, that he broke a stick over her back while beating her, and that this was followed by continued cruelly. He threatened her with a knife, poured cold water over her, &c. For the greater part of this time she was suffering from a painful internal disease, of which he was aware. Having got away from her husband she was afraid to return — she believed he would kill her. The evidence of Drs. Campbell and Moorhouse was taken us to the physical condition of Mrs Craig, and that of Rev. F. W. Isitt as to some negotiations for a reconciliation, and the case was adjourned till next day.
Press, Volume LIII, Issue 9487, 5 August 1896, Page 3

Maintenance.— The case against W. A. Craig, charged with having  deserted his wife, Florence Craig, and left her without adequate means of support, was continued. Mr Byrne appeared for the complainant, and Mr Deacon for the defendant. The defendant in his evidence denied having ill-treated his wife, and said that when she left Auckland they parted affectionately. Decision was reserved.
Lyttelton Times, Volume XCVI, Issue 11029, 6 August 1896, Page 3

(Before Mr E. Beetham, S.M.) Maintenance.— His Worship gave judgment in the case heard last week in which Florence Craig charged her husband W. A. Craig with deserting her and leaving her without adequate means of support. Mr Byrne appeared for the complainant and Mr Deacon for the defendant. After referring briefly to the case, Mr Beetham said he would make no order.

Civil Cases. — J. Murdoch v. W. A. Craig. This case was called on in order to decide against whom costs were to be entered up. Dr Murdoch having stated that the proceedings had been taken without his authority. Mr Russell appeared for Dr. Murdoch, Mr Deacon represented defendant; Mr Ritchie, the solicitor on the record, was also present. Evidence was given by Dr Murdoch, A. R. Kirk, G. P. Ritchie, J. Preece and S. Norton, after which the case was adjourned sins die in order to enable the evidence of Mr Kippenberger to be given.
Lyttelton Times, Volume XCVI, Issue 11033, 11 August 1896, Page 3
Star, Issue 6829, 23 June 1900, Page 5

Jubilee Studio Coupons. - All Coupons of the late firm have been taken over from this date by G. E. A. Burrell, Photographer, and can be used at his studio, 158, Chester Street west, between Durham Street and Cranmer Square. Appointments should be made.
The Star, Issue 8266, 15 March 1905, Page 3

In June 1908 her husband divorced her on the grounds of desertion, the Evening Post stated:

Auckland, 2nd June.
At the Divorce Court William Alfred Craig petitioned for a dissolution of his marriage with Florence Eugene Craig on grounds of desertion. Petitioner said he was married at Auckland on 10th January, 1904 (sic)(11 January 1894). After six weeks respondent was taken ill and her doctor advised her to take a trip, and she went to her mother in Christchurch. She had since refused to live with him again, saying that where she was she had a good home and every comfort. A decree nisi was granted, to be made absolute in three months.
Evening Post, Volume LXXV, Issue 131, 3 June 1908, Page 4

Obituary.
Mr John Preece. One of the well-known figures of Christchurch, Mr John Preece, died at the age of 84 years at his residence, "Atauloma," 34 Averill Street, Shirley, on Monday.

Mr Preece, who was born in the "Black Country," came out to the Dominion from England 56 years ago, in the ship Celestial Queen [about 1874], and was until twenty years ago in business in High Street as a merchant tailor. He learned his trade in England, and before coming to New Zealand had already spent two years at his trade in America.

Mr Preece was well known in cricketing circles, and was for some time a member of the Veterans Cricket Club. He was also later interested in the Worcester street Bowling Club.

Mr Preece married before coming to the Dominion, but Mrs Preece predeceased her husband by some thirty years. He is survived by four daughters and three sons out of a family of sixteen, these being Mrs H. Beauchamp, of Anakiwa, Picton; Mrs F. E. Craig of Shirlev; Mrs A. Farmer, of Sydney; Mrs H. Jamieson, of Wellington; Mr A. Preece of Sydney; Mr C. H. Preece of Chatham Islands, and Mr H. Preece of St. Albans, and also a number of grandchildren and great grandchildren.


Emma Preece died on board the ship "Waihora" on voyage to Sydney about May 1897 aged 49 years. 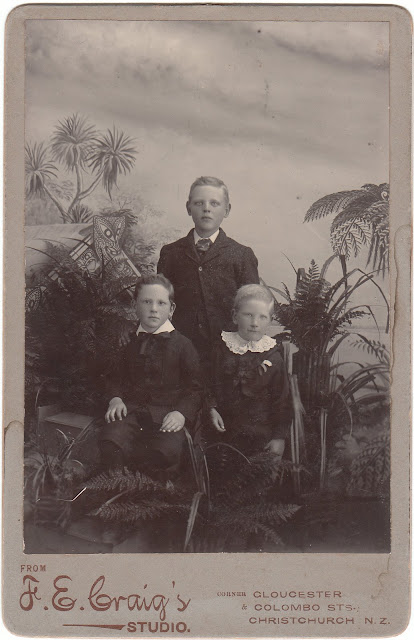