Henry Bowman Percy was the uncle of the Canterbury photographer Edward Percy Sealy.

Although unconfirmed Henry Bowman Sealy probably arrived in New Zealand on 2 April 1848 on the barque "Indian" from London. 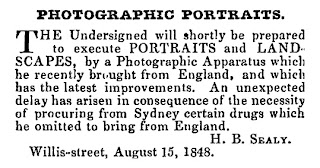 Port Nicholson Mechanics' Institute
NOTICE. A Class for instruction in Linear Drawing is now being formed in connection with this Institute, which will meet at the Rooms of the Institute every Wednesday evening, at 8 o'clock, and will be open to any Member on payment of the sum of One Shilling per quarter. Pupils will be required to find their own drawing materials. By order of the Committee, H. B. Sealy, Secretary. Wellington, 18th January, 1849.

... The committee have to add that Mr. Sealy who has so efficiently filled the office of Secretary to this Institution for the last twelve months, has also, intimated his intention to decline to act any longer in that capacity...

... Votes of thanks were then passed to Mr. Norgrove for his valuable services in conducting the drawing class, and to Mr. Sealy for his great exertions as Secretary...

On Thursday [12 August 1852] evening Mr. Sealy delivered a lecture on Photography in the Hall of the Mechanics' Institute. After a few introductory remarks, the lecturer gave an account of the origin and history of the art, and explained the various chemical preparations used in obtaining copies of prints, &c, by the Photographic process, and illustrated the subject by means of a camera, Daguereotype machine, and several diagrams and specimens prepared for the occasion. There was a very good attendance of members, who appeared highly pleased at the information derived from the lecture.


To be Sold,
The Cottage (containing Four Rooms) now in the occupation of the Undersigned, and held on a Ground Lease, of which 17 years are unexpired, at a Rental of £5 per annum. There is about a quarter of an acre of Garden Ground well fenced.
H. B. Sealy.
Apply to
August 21, 1852.


The Leasehold Cottage, on Golder's Hill (containing five rooms,) formerly occupied by Mr. H. B. Sealy, and now tenanted by Mr. H. Brooking.
Apply at the Office of this Paper. September 30, 1854


Registrar of Deeds. Mr. Sealy, the newly-appointed Registrar, returned on Thursday, by the "White Swan," having gone through, in Auckland, the requisite legal form, and procured the necessary registration books. We learn that the Registrar's office is now likely to be open in a few days, a prospect which the public generally will hail with much satisfaction. 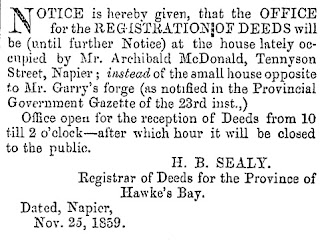 ... Hawke's Bay, where I resided for the last twenty years, the climate is somewhat warmer than than of Jersey, and the fogs are absent. There is seldom frost except on the hills. I used to grow grapes in my garden and on the walls of my house equal to any I have seen in Jersey market, and I have had bunches weighing six pounds. Maize, sweet potatoes, tomatoes, pumpkins, rock and watermelons, grow freely in the open gardens, as do most of the English fruits. Peaches grow on standard trees almost wild. I used to give them in buckets full to the pigs. Currants do not thrive, but do well further south.

What will Jersey men think of new potatoes in July (equivalent to January here), yet I have had them in a mild season, and in October (equivalent to April), they come in ordinarily, but unfortunately there is no London market at hand. Of late potatoes, I have known 200 tons to be taken off ten acres, and have myself grown fifteen tons per acre. No manure was used, the virgin soil being very rich. I do not mean to say that an average crop would be nearly so great. As for grain, the South Island is now shipping large quantities to the English market. I saw in January last, near Timaru, one single field of wheat 1200 acres in extent, or nearly two square miles. I saw another of 700 acres, and many from 100 acres and upwards. The crop was then looking splendid, but was afterwards I believe damaged by heavy rains. The yield is often as high as 70 bushels to the English acre. At shearing time and harvest there is often great difficulty in obtaining the necessary supply of labor, and machinery is employed to the utmost extent possible for harvesting. So much for the country your correspondent tells us is a land of paupers.

It is gratifying to find that though away from the colony, Mr Sealy is still with us in heart, and that he will not permit to pass unexposed and unrefuted any of those detractions of New Zealand which some writers are so fond of putting forward. Mr Sealy's friends will no doubt be glad to learn that he has not given up the idea of again taking up his residence amongst us. "I have no pecuniary interest," he says, "in promoting emigration, but I am attached to my adopted country, to which I hope to return, and which I have seen grow from a few village settlements, into one of the most promising of British colonies, and which I believe will yet become, as it is sometimes called, the Britain of the South."


We are indebted to Mr E. Lyndon for a most interesting sketch of Tennyson street as it appeared in 1861. It is very difficult to recognise in it even the topographical features, so great is the difference between then and now. The hill, now dotted with houses surrounded by tall trees, was then divided into several grass paddocks, and only at the foot were there any trees, and those very young.

The buildings in the street were the office of the Registrar of Deeds, a small wooden building in which the Herald was printed by Mr Woods, Mr Tiffen's original house, Mr J. Anderson's cottage on the site now occupied by St. John's is parsonage, the Rev. Mr Marshall's house, subsequently occupied by Dr. Spencer, and, in the background, Mr Sealy's original house on the site where Mr Thomson's residence is now, and a little building used as a Land Office, near the present site. To the left of the sketch, and across the gully which is now Milton-road, is seen the Rev. W. Colenso's house. The space in front, now occupied by the south side of Tennyson-street and by Emerson-street, appears as a waste piece of ground absolutely devoid of buildings.


I am editing the voluminous correspondence of the Withers/Drummond families of Everton, Liverpool and London (1839 - 62)and have discovered much about the future wife of Henry Bowman Sealy. It appears that in her early twenties she was a governess to the Withers family in Enfield, near London. At least 1 letter from her can be found in the archive.
R.M.Healey,
School of History,
University of Liverpool,UK