The "old folks at home" are, we are glad to find, not left in ignorance of the appearance of our picturesque city, as it was some eight months ago. In the Illustrated London News, of August 30th, there is an admirable reproduction of the large photographic view of the city taken by Mr Melhuish, of Princes-street. The picture has the line, of Ratttrey-street and part of that of Maclaggan-street in the foreground the jetty crowded with vessels; the hills over Anderson's Bay the sandhills, and the ocean in the distance. 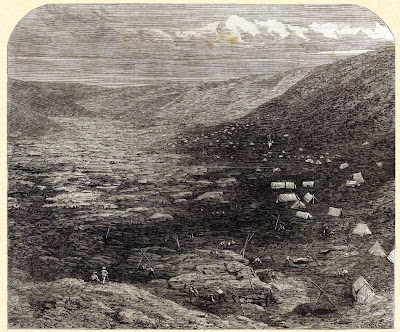 The same paper contains a view of the Tuapeka gold field, also from a photograph by Mr Melhuishsh and a short but very favorable account of the gold fields, and the pastoral and agricultural resources of the Province.
Otago Daily Times , Issue 290, 24 November 1862, Page 4
Posted by Early Canterbury Photography at 1:00 AM