father of the photographer Archibald Billens 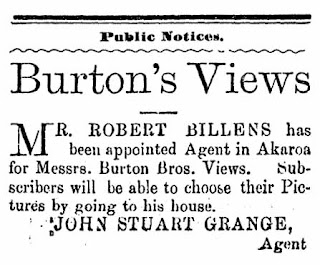 Robert Billens shown in this advert is either the father or brother of Henry Billens.
Akaroa Mail and Banks Peninsula Advertiser, Volume VIII, Issue 815, 6 May 1884, Page 3


Photography.— As will be seen by advertisement elsewhere, Mr H. Billens is now studiously engaged upon a new enterprise, viz., photography; and judging from that gentleman's well known artistic ability, and the specimen portraits and views already produced, there is no reason why the venture should not be very successful.

A visit to the new studio, recently erected, will at once prove that things are not being done by halves. The building itself is admirably suited for the purpose intended, being sufficiently lighted from the side and roof to enable the artist to accommodate sitters (with the exception of a few days) all the year round. The interior is distempered a neutral tint, and is furnished with nicely painted screens, curtains, ornamented tables, flowers, and all other necessary accessories. The chief object in the room, however, is the splendid portrait camera, the lens of which is taken from the hands of Ross, the first-class maker. Another expensive lens has been purchased for landscape work.

At the rear of the premises stands a convenient dark room, a veritable "camera obscura," where the awful mysteries of developing, fixing, toning, etc, are wrought amid the odour of strong chemicals.

A number of printing frames, containing recently taken negatives, stand outside the door of the dark room, the process of printing under the action of the light silently going on.

There can be no doubt that Mr Billens has spared no expense in providing a suitable building and instruments for the business, and any observer who may please to visit the premises will agree that the venture is worthy of encouragement, and deserves success.

A few portraits and a number of views in the vicinity of Akaroa are exhibited in the window at the store.

Photography.— A second visit to Mr Billens' studio shows that rapid strides have been made in the interesting art, and the prints, as far as detail and tone are concerned, leave little to be desired.

Enamelling is also being introduced, and the photos generally compare favorably with the average Christchurch productions. A novel appliance in the studio is a pneumatic shutter fixed to the camera. It is manufactured by Marion & Co., London, and patented by Cadett. The advantages of this apparatus, in taking portraits of children, are very great. The operator is enabled to stand at a distance of ten or twelve feet from the camera and open or close the shutter at will.

An inspection of the studio and its appurtenances will repay the visitor for the trouble, and prove highly interesting. 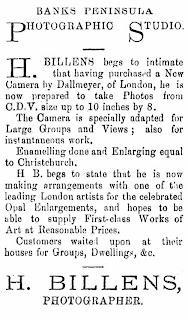 Photography.—Our local photographer, Mr H. Billens, has shown us a group that he has taken of the newly-married couple, Mr and Mrs Mottram, Mr and Mrs Penlington, the bride's father and mother, the bridesmaids, the Misses Noonan and Penlington, and Mr William Penlington, best man. The picture is of the double cabinet size and nicely executed, the likenesses being excellent and the grouping good. 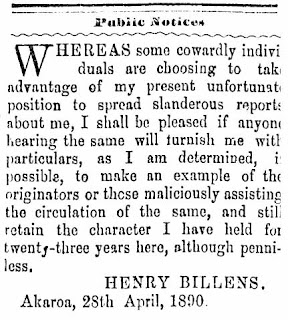 Photography. —In another column is a notice from Mr H. Billens, late of Akaroa, but now of Palmerston North. He has brought with him a Jack camera, specially suitable for animal photography, either singly or in herds, and having had such a large experience amongst the numerous dairies and herds in the Manawatu and Rangitikei districts for over twenty years, he is now, recognised one of the best animal photographers on the coast. But all classes of outside work will be undertaken if necessary. As Mr Billens's visit will only be for a few days, he will be glad to get notice at once of any orders. 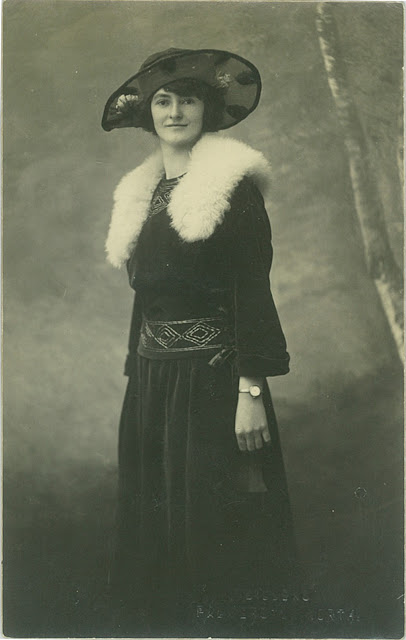 The Early Days.
An Old Akaroa Resident.
On January 6, 1859, seventy years ago, there arrived in Lyttelton Harbour the thousand-ton sailing vessel Clontarf, ,l12 days out from London, and carrying 350 immigrants besides cabin passengers and crew.

With thoughts of news from the Old Country, the appearance of the vessel was hailed with delight by the residents of Lyttelton, but their excitement hardly equalled that of the passengers who had been couped up for nearly four months, existing on food that smacked of the prison diet of these days. There are few of that band of pioneers alive to-day says the "Lyttelton Times" to tell of |he hardships through which they passed, both on ship and after landing. There is one, however, who has vivid recollections of the voyage — Mr Henry Billens, of 78, Fitzherbert Avenue, Palmerston North, who came out with his parents as a lad of thirteen years.

Mr Billens has reached the age of eighty-three years, but is still hale and hearty. He recalls that there were eight deaths on the voyage. The food, to use his own expression, "was a caution."

"We fed on biscuits stored in sacks out of which cockroaches and centipedes crawled." he told a Wellington "Post" reporter. "There was no milk on board, but there was dirty sugar and molasses. The best meal we had on the ship was after they caught a shark, and it was delicious on landing at Lyttelton to get a feed of bread and dripping."

Lyttelton was a very small place in those days, Mr Billens added. Everything was primitive, and the people were dependent a great deal on the Maoris, who sold them potatoes, fish, eels, firewood and such other things as they could supply, in shillings worth.

The English mail came once a month, and then there was a great rush for the Post Office. The Billens family built their own house on the hillside above the gaol — there was no street there then. Most of the houses were constructed of manuka saplings, nailed struts, and filled in with clay. For several years Mr Billens found occupation in Lyttelton at various trades. Later he went to Kaiapoi, Rangiora and Akaroa. In spite of the difficulties with which the settlers were faced, he says everyone was very happy.

Lyttelton in those days had only two jetties — the Government one and Peacock's where as a boy he used to fish off the rocks is now reclaimed land, covered with large buildings.

Access to Christchurch was by means of the track over the Port Hills, and, as a member of the Lyttelton Anglican Choir he tramped to Christchurch to sing at the laying of the foundation stone of the Cathedral. He was also one of the first persons to walk through the Lyttelton Tunnel, just after the railway had been completed at that time as far as Heathcote, but prior to that the journey to Christchurch from Heathcote was made by coach.

Many of the older Akaroa residents will remember Mr Billens, when he had a store at a house on the section opposite Mr G. Davidson's in Lavaud St., where Mr J. Ramsay now lives. He took a keen interest in local matters and was a member of the Akaroa Borough Council. His photograph is to be seen today on the Council walls. It was Mr Billens' father who made the triangles, cymbals and drums for Lyttelton's first band, and he had to walk to Mount Pleasant to get sheepskins for the drums, while the wood for the frame was brought from Akaroa.

Mr Billens has a splendid memory for a man of his age, and can recall events in London when he was a boy hardly out of his teens. Among these were the peace celebrations at the conclusion of the Crimean War, and the review of the returned troops, including the remnant of the famous Light Brigade.

On the voyage out from England the passengers of the Clontarf had an excellent view of Donati's comet, which reached from the horizon to the zenith.

NINETIETH BIRTHDAY
Mr Henry Billens. Seventy-seven years ago on January 6 last, there arrived in New Zealand, after a passage of 112 days, the emigrant ship Clontarf, with a band of pioneers seeking their fortunes in a new land. Among this company was Mr Henry Billens, born at Knightsbridge, London, on February 14th, 1846. He celebrated his 90th birthday at his home in Fitzherbert Avenue, Palmerston North, where he still indulges in his gift of painting.

He is in comparatively good health for his age, and can recall many incidents which made life worth while when civilisation in New Zealand was young. He can look back, too, on a long period of activities in the spiritual field, as chorister, Sunday school superintendent and preacher.

Though he was but five, years of age at the time, Mr Billens can recollect being taken on a visit to the exhibition held at Hyde Park, London, in 1851. He remembers the veterans returning from the Crimean War in 1856 and watched them march through London streets behind a military band and cheer Queen Victoria when she made her appearance on the balcony of Buckingham Palace to wave her handkerchief at the soldiers. The funeral of the Duke of Wellington has a place, in his recollections also, as well as the peace proclamations and attendant ceremonies when the Indian and Crimean Wars ended.

Thirteen years of age when he first set foot on New Zealand soil at Lyttelton, Mr Billens was even then quite handy at the shingling trade. With his parents and the other eight children of the family, he walked over the hills to Christchurch. They settled there for some years, but after making a trip to Akaroa in the seventies, Mr Billens remained there for twenty years. He can I remember the French immigrant who arrived there and settled at one end of the town whilst the English were at the other.

Mr Billlins himself afterwards owned the cottage erected by French sailors for Commodore Lavaud, and there several members of his family were born. In those days Akaroa was a refitting station for the whaling vessels that operated around the New Zealand coast. The harbour was also used extensively by British warships.

The start and finish of the Lyttelton tunnel can be recalled by Mr Billens, who had the privilege of walking through when it was lit with candles. There were great rejoicings when the parties drilling from each end met, a bullock being roasted for the occasion.

Mr Billens came to Palmerston North in 1890, and, until his retirement a few years ago followed the business of a photographer at this centre, where in earlier days he was identified with the activities of various sports clubs.

He has always been devoted to the church. As a boy he sang in the choir of St Paul's, Knightsbridge, London, and was also a member of the choir which sang at the laying of the foundation stone of Cathedral.

During his residence in this part of the world Mr Billens has conducted services in nearly sixty different places for the Presbyterians and Nonconformists all over Manawatu and Rangitekei, from Levin to Mangaweka. Recalling recently that he had made journeys on foot, horseback and in carts, Mr Billens said:"I have slept in a large variety of beds, yet all were comfortable. I have also always found space for a good share of country farmers' sheep and lamb of the best quality. I have travelled in all weathers at all times of the year, and on bitter, frosty mornings. The Bible is still Great Britain's book of rules, with the largest circulation of any book."

An iced cake, the artistic work of a grand-daughter, Miss Brooker, of Wellington, is one of Mr Billens's birthday gifts.