Mrs Carlyle, whose death was announced from Wanganui this week, was a lady of considerable artistic capability and promise. Before her marriage, when she was Miss Emily Collis, she gained quite a reputation for her clever and humourous black and white work, some of which appeared in the Observer from time to time in the form of caricatures and sketches from New Plymouth. The deceased lady was the youngest daughter of the late Mr W. Collis, photographer [sic], of New Plymouth.
Observer, Volume XXIII, Issue 50, 29 August 1903, Page 4

Mr W. A. Collis has forwarded to us some specimens of his Christmas photograph cards, which are very artistically got up. The chief feature in the cards this year is the Jubilee gathering in the centre of the town in March last, although, of course considerably reduced, the figures are very distinct. The border of flowers around the picture is pretty, and adds to the attractiveness of the cards. Mr Collis has also views of a waterfall on the Waiwakaiho some of which have been artistically coloured by Miss E. Collis, and form a very pretty picture. On one of the boughs of a tree are the words "Compliments of the Season." There should be a large demand for these cards.

We understand that the Misses Davis and Collis, both well and favourably known in connection with the photographic art, and who were recently with Mr Martin at his studio in the Avenue, have decided to commence business for themselves. To that end they have leased promises in Ridgway Street, next Mr Hogg's confectionery establishment, and will open the same next week under the title of the Ridgway Studio. It is to the credit of these ladies that they have the enterprise to thus start business for themselves, and, knowing their capabilities, we wish them every success.


A new departure in the photographic line is the enterprise displayed by two young ladies of Wanganui. Miss Davis, whose woik as a mounter and finisher is well known, and Miss Collis, an artist of considerable talent and repute, have taken the up-stairs portion of the Ridgway buildings, and will open Ridgway Studio next week. The Studio is being fitted up in keeping with the most modern ideas, while the ladies' dressing, room, office, laboratory, and appliances are all up-to-date. We congratulate these young ladies on their enterprise, and
anticipate good business for them.— Wanganui Chronicle. 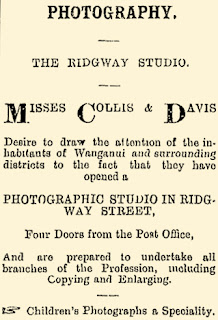 Misses Collis and Davis, the enterprising young ladies who have opened a photographic studio in Ridgway Street, four doors from the Post Office, announce that they are now prepared to fulfil all orders entrusted to their care, including re-touching and enlarging.

Miss Collis is an artist of no mean ability, whose lightning sketches and other work is not unknown in Wanganui, and in addition she has had considerable experience in photographic studios in Auckland and New Plymouth.

Miss Davis was connected with Mr A. Martin's studio for many years, and also with Messrs Wrigglesworth and Binns of Wellington, so that both ladies are well qualified to conduct a business that we sincerely trust will be highly successful. such enterprise, especially when undertaken by the fair sex, deserves hearty support.


Misses Collis and Davis, the enterprising young ladies who have decided to enter into the photographic business on their own account, announce that their Ridgway Studio is now open. The studio, which is situated four doors from the Post Office, is replete with all the necessary conveniences, and is, we need hardly add, most artistically arranged. Misses Collis and Davis are deserving of encouragement for their enterprise, and it is pleasing to note that yesterday, when their studio was first opened to the pubic, they had quite a number of sittings.


The photographic art practised in Wanganui is generally criticised by those in a position to pass opinion as being equal to anything of the kind in the colony.

Within the past four weeks the Ridgway Studio has been established and fitted in an up-to-date manner by the Misses Collis and Davis, and during that time they have been kept busily employed in attending to the requirements of many clients from town and country. The result to-day is a display in the show cases of some really excellent specimens of their skill, including some beautiful enlargements, bearing most favourable comparison in quality with work turned out from more pretentious ateliers, and at prices practically lower than those charged in the larger centres.

The Misses Collis and Davis have a happy idea as to the posing of the subjects brought under the camera, and the finishing and mounting by the aid of the latest bromide process gives an effect which is decidedly satisfactory. The works of art referred to include not only adults, but a number of juveniles, the latter taken in some new and novel positions, artistic and at the same time pleasing to the eye. We heartily compliment the Misses Collis and Davis on the undoubted success which has so quickly attended their business enterprise, and anticipate for them a long continuance of that public and practical support which they so much deserve.


The two large show cases on either side of the entrance to the Ridgway Studio, containing as they do many beautifully-finished photographs, give ample evidence of the large amount of work recently perfected at the establishment, proving also how successful the Misses Collis and Davis have been during the few months since they commenced business. Particular attention is directed to the show case with the artistic display of children's photographs, without doubt a speciality of this up-to-date atelier.


Misses Collis and Davis are progressing in Wanganui. An enlarged photograph recently finished by them for presentation was declared by the Wanganui Herald to be the best yet turned out in Wanganui.

The show cases at the entrance to the studio of Misses Collis and Davis are at the present time filled with splendid photographs, indicative of much skill on the part of the well-known lady photographers. Misses Collis and Davis are prepared to undertake any class of photographic work, and it is superfluous to say that patrons may rest assured that the very best results will be the outcome.

The Misses Collis and Davis, who have been in business in Wanganui for the last fifteen months having disposed of their interests in the Ridgway studio, request that all accounts owing to them be paid forthwith, and state that they will be in attendance up till Saturday, 16th March, to receive the same. 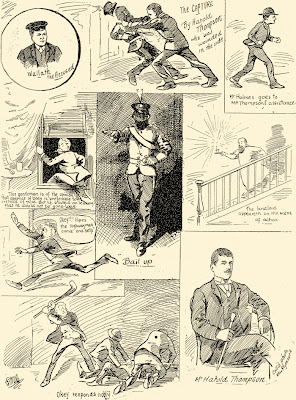 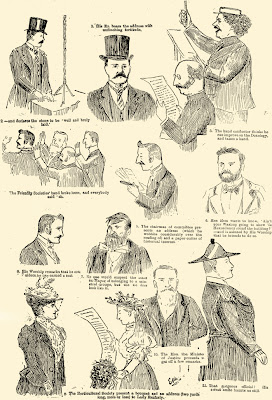 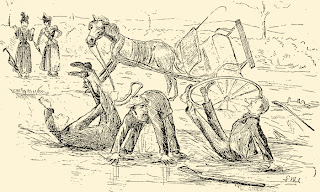 A New Plymouth Sketch
The above represents what befel three New Plymouth sports. Their tin gee-gee, it is supposed, having come from the wilds of Bell Block, was not accustomed to meeting so much youth and beauty at one swoop. Accordingly he shied, and shot the three sports into the ditch.
A sketch by Emily May Collis (EMC)
Observer, Volume XVIII, Issue 1023, 6 August 1898, Page 22