Mr Edwin Hall, the artist photographer at Woodville, is turning his attention to Danevirke, and announces  in another column that he will visit here every Monday, commencing on the 26th inst. Mr Hall has prepared a studio adjoining Mr Wright's Restaurant, and has fitted it up with the necessary appliances to ensure good work. Mr Hall has acquired some reputation as a careful artist, and we trust his venture will prove successful.


We remind our readers that Mr E. Hall, photographer, will again visit Danevirke (sic) on Monday next, and may be consulted at Mr Wright's Restaurant.
Bush Advocate, Volume II, Issue 118, 9 February 1889, Page 2

Mr E. Hall, photographer, has bean taking a series of views at Mangatoro. He went over today to take some fresh photographs of the woolshed, etc.
Bush Advocate, Volume IV, Issue 262, 14 January 1890, Page 2 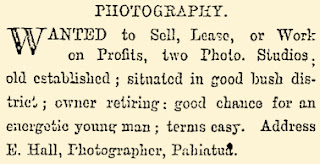 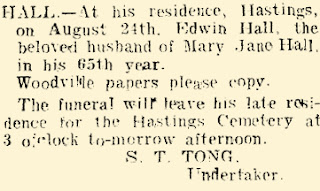 
News has been received of the death at Hastings of Mr Edwin Hall, formerly of Woodville, in his 65th year. The death occurred on Wednesday night, and sincere sympathy is felt for the bereaved family. The deceased was a brother of Mr C. Hall, M.H.R.
Bush Advocate, Volume XVI, Issue 500, 26 August 1904, Page 3 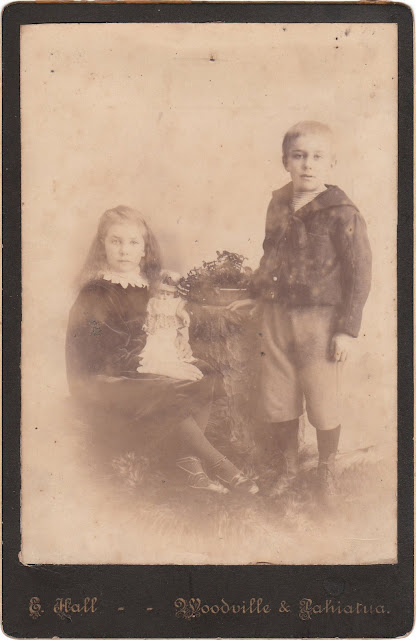 Posted by Early Canterbury Photography at 12:26 AM