The Travels of George Dobson Valentine

Arrival
George Dobson Valentine arrived in Melbourne, Australia on the s.s. "Garonne" on 9 November 1882. This vessel had departed London on 24 September 1882 and had called at Plymouth and Naples where further passengers were embarked. It is not known if George Valentine joined the s.s. "Garonne" in London or Naples. 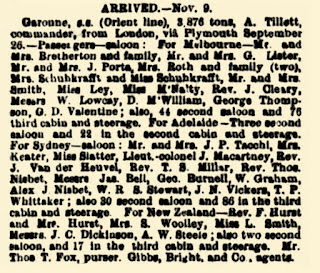 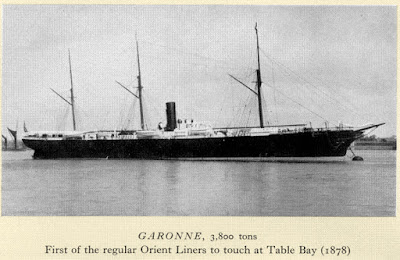 Arrival of the s.s. Garonne.
The Garonne from London via Plymouth, arrived last evening with mails, passengers, and cargo. The dates of English papers brought by the Garonne are to September 29, and, owing to the non-arrival of the R. M. S. S. Peshawar, this gives some three weeks later news.

The Garonne brings upwards of 320 passengers, of whom 138 are for Melbourne, 134 are for Sydney, and the balance for Adelaide and New Zealand. Some 20 bags of mails and about 600 tons of cargo have come in the steamer for this port. The Garonne has been away exactly 106 days from this port until her return. She left here on July 25, and went home via Cape Town. A quantity of frozen meat was sent home by her, which turned out exceedingly well. The refrigerating machinery is the best of its kind, and is in excellent working order, so that in so far as the steamer is concerned, there will be no difficulty in forwarding another consignment of carcasses.

The Garonne left London on September 24, and called at Plymouth, whence she sailed at noon on September 26. Strong winds and squally weather were met with across Biscay, and off the Portugal coast the engines had to be slowed on several occasions on account of the thick foggy weather which was prevalent. The Gut of Gibraltar was cleared on September 30 at 10 minutes to 4 a.m., and the Garonne reached Naples at 2 p.m. on the 3rd ult. Passengers and mails were embarked, and a departure was taken at 6 p.m. for Port Said, where the steamer arrived on the 7th ult. at 1 p.m. After finishing coaling the Garonne entered the canal at a quarter to 12 a.m. on the 8th, and cleared it at half past 11 a.m. on the 10th.

The passage of the Red Sea was pleasanter than was anticipated, the weather having proved exceptionally cool for the season of the year. Aden was reached at 10 minutes to 9 a.m. on the 15th ult., but in consequence of a dearth of labour coaling operations were retarded, and the Garonne did not get away until half-past 1 a.m. on the following day. Cape Guardafui was passed at 1 p.m. on the 17th ult., and light winds were met with to lat. 8 deg S., where the S. E. trades were taken. The Six Islands (Chagos Group) were sighted on the 22nd ult., and thence the Garonne had to contend with strong trade winds and high head sea until sighting Cape Leuwin on the 4the inst. at 9 a.m. This adverse weather interfered to some extent with the capital steaming average which the Garonne had been maintaining up till then.

Light winds were experienced from the Leuwin to Cape Otway, which was passed at 9 a.m. yesterday. The Heads were entered at 3 p.m., and the bay was reached at half-past 6 p.m. An attempt was made by Pilot Loisseau to get her alongside the railway pier, Williamstown, before dark but on approaching the pier the pilot backed out again, insufficient depth of water being the reason assigned. The Garonne in being moved about came uncomfortably   close to the large iron clipper British Envoy, lying at anchor in the stream. There was a low tide yesterday with the easterly and northerly winds which have been prevailing of late. The Garonne was boarded some distance down the Bay by Mr. D. P. Maclean, health officer, and Mr. T. D. Hammond, senior immigration officer. The inspection was satisfactory, and passengers were allowed to land as soon after as they liked.

The Garonne on this voyage is commanded by Captain A. Tillett, well known as a capable and most efficient chief officer in the company's service. Mr. Livett, from the Carlisle Castle, has joined as fourth officer, and Mr Keen, late of the s. s. Norfolk, is chief steward.

From Mr. Fox, the purser, prompt delivery was had of files and despatcher for "The Argus." The cargo will be got out as expeditiously as possible, in order that the Garonne may be despatched to Sydney, where she will have but brief stay, as she has to take the place of the Austral on the return voyage. It is expected that the Garonne will be able to get away early tomorrow morning. As a pendant to the steamer's report, it may be mentioned that on Wednesday night, owing to the rarity of the atmosphere or other peculiar atmospheric condition, the light at Cape Northumberland was visible 43 miles distant when first sighted. The steamer's position was verified by several stellar observations and reckoning worked back from the time Cape Otway was abeam. The atmosphere at the time was described as being clear overhead, but apparently hazy on the horizon.


Mr. G. D. Valentine passed through Albury near the Victoria-New South Wales border on Wednesday 22 November 1882. This likely to have been George Dobson Valentine, the following newspaper article indicates he was travelling from Sydney to Melbourne. 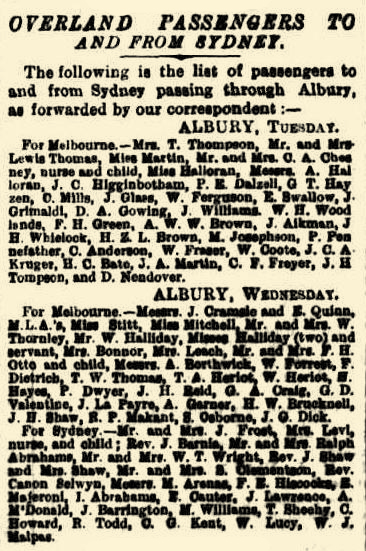 The Sydney Morning Herald (below) indicates that Mr G. D. Valentine travelling from Melbourne to Sydney passed through Albury on Tuesday 28 November 1882. 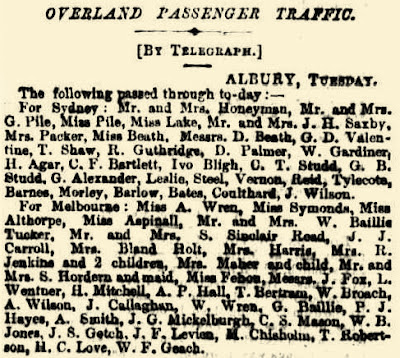 Departure
After three weeks in Australia, George Valentine departed Sydney on 30 November 1882 on the Royal Mail Steamer "Australia" which was bound for San Francisco via Auckland and Honolulu. 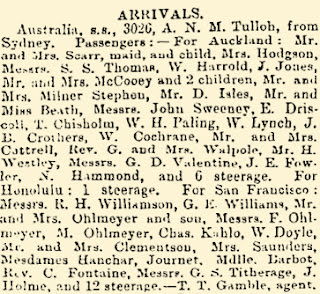 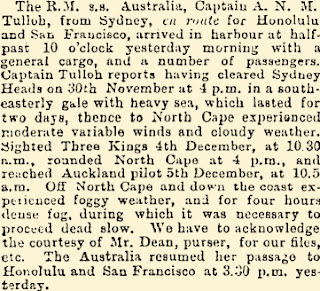 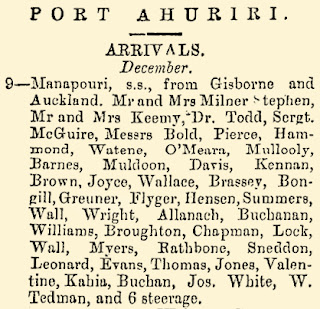 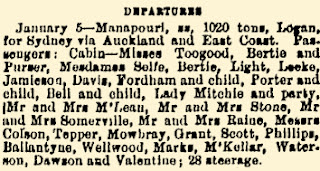 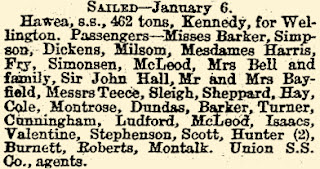 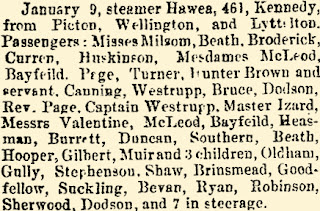 
The s.s. Wellington departed Auckland on 15 January 1883 for Tauranga, the passengers were not named but on its arrival in Tauranga, Mr Valentine is listed as one of the passengers along with Mr Chapman.
New Zealand Herald, Volume XX, Issue 6603, 16 January 1883, Page 4

Arrived at the Port of Tauranga 16 January 1883 on the s.s. Wellington from Auckland
passengers included Messrs Valentine, Chapman ...

As the Wellington was leaving the Auckland wharf on Monday evening the fore yard was broken, short off by one of the braces catching in the rigging. A portion of the awning was carried away with it.
Bay of Plenty Times, Volume XII, Issue 1477, 17 January 1883, Page 2 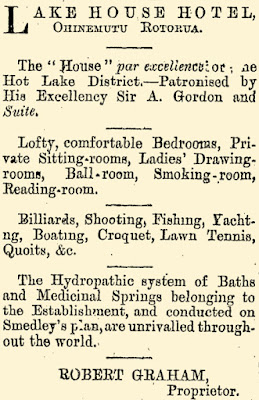 We hear on good authority that no less than 120 tourists passed through the bush on to the Lakes during the last week, and the cry is more are coming.
Bay of Plenty Times, Volume XII, Issue 1787, 30 January 1883, Page 2 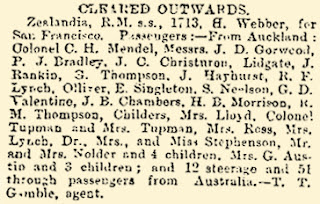 G. D. Valentine departed Auckland on 30 January 1883 for San Francisco via Honolulu. Colonel Tupman, [George Lyon Tupman] the chief of the transit of Venus party at Burnham, was a passenger by the mail steamer Zealandia for San Francisco. [1] The Zealandia carried £11,663 in specie from Sydney, for San Francisco; also 147 packages of opium, valued at £12,000 [2].


Arrival and Departure of the Zealandia.
The R.M. s.s. Zealandia arrived in harbour yesterday morning shortly after nine o'clock, with a number of passengers. Captain Webber reports having left Sydney at 4 p.m. on the 25th inst.; rounded the North Cape at 6.50 p.m. on Monday, arriving in harbour yesterday morning. Fine (weather prevailed until receiving the pilot on board; thick mist and rain from Tiritiri. The New Zealand resumed her voyage for San Francisco, via Honolulu, having received the New Zealand mails, shortly after 4 p.m. yesterday.
New Zealand Herald, Volume XX, Issue 6616, 31 January 1883, Page 4 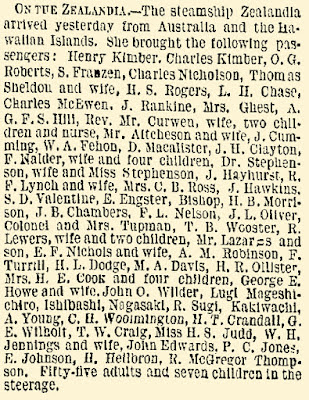 
The Aorangi anchored off Oriental Bay, Wellington Harbour at about 5.30pm on 17 January 1884.

The Rotorua left Lyttelton at 3 p.m. on Saturday, and arrived at Wellington at 6 a.m. on Sunday was detained there by bad weather until noon yesterday, when she sailed for Picton, which was reached at 6 p.m.; left at 7 p.m., and arrived here at 4 o'clock this morning. Experienced a heavy southerly gale with a high sea from Wellington until reaching Terawhiti, after which it moderated. She sailed at 3 p.m. for Picton, Wellington, and South.

Posted by Early Canterbury Photography at 1:42 AM