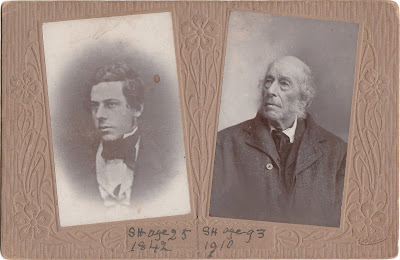 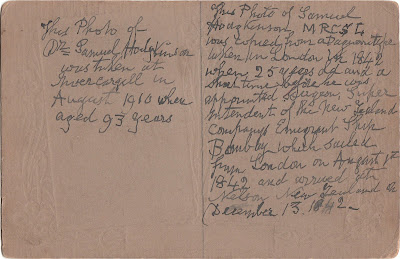 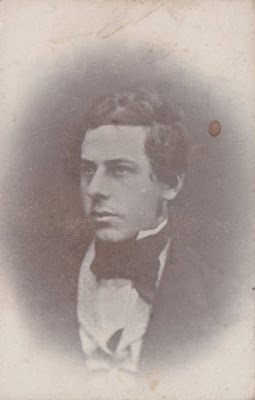 This photo of Samuel Hodgkinson MRCS was copied from a Daguerreotype when in London in 1842 when 25 years old and a short time before he was appointed Surgeon, Superintendent of the New Zealand Company Emigrant ship Bombay which sailed from London on August 1st 1842 and arrived at Nelson, New Zealand on December 13, 1842 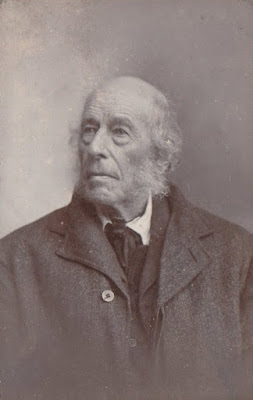 This photo of Dr Samuel Hodgkinson was taken in August 1910 when aged 93 years. 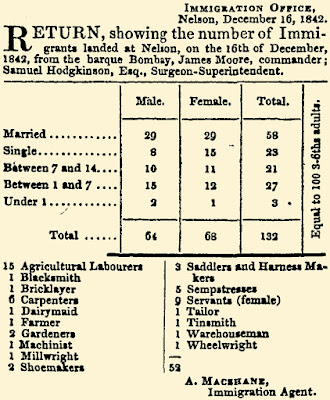 Nelson Examiner and New Zealand Chronicle, Volume I, Issue 41, 17 December 1842
DR SAMUEL HODGKINSON, M.R.C.S.
(Extract from New Zealand Cyclopaedia, date 1905, page 794.)
Dr Samuel Hodgkinson, M.R.C.S. (L.) sat in the House of Representatives, as member for Riverton, in the Parliament of 1876. He was returned for Wallace at the general election of 1887. Dr Hodgkinson was born in Nottinghamshire in 1817, and studied for the medical profession at London University College, where he gained honorary certificates in anatomy, surgery, and botany, and became a member of the Royal College of Surgeons, London, in 1840. He proceeded to Nelson in 1842 a surgeon superintendent of the New Zealand Company's emigrant ship Bombay, and was afterwards in practice in England. In 1847 he came out to Port Phillip, Melbourne, and four years later crossed over to Canterbury, where he entered into pastoral pursuits. He visited England in 1854, and actively promoted emigration to the colonies. On his return in 1857 he resided in Auckland for two years, when he removed to Southland, and resumed country life. He was elected to the Provincial Council of Southland in 1864, and joined the Provincial Executive in 1865. Dr Hodgkinson has been foremost in all progressive movements, has always advocated a Liberal policy, and in many of his views was often in advance of his time. He has published from time to time a number of useful and able pamphlets on political questions. Dr Hodgkinson is now enjoying a green old age, with a mind still vigorous and clear.
Otago Witness, Issue 2953, 19 October 1910, Supplement