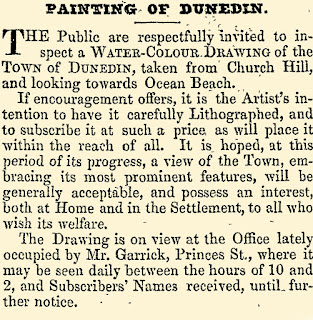 Drawing of Dunedin. — We have much pleasure in noticing a water-colour drawing of the Town of Dunedin by Mr. Shaw. Our readers will see by an advertisement in our columns that it is the artist's intention to have it lithographed if inducement offers. Mr. Shaw deserves to be encouraged in this undertaking; and we would recommend the public to inspect this work of art, which will well repay them for the trouble.
There are many fine views in Otago, particularly at the month of the Taieri River, which Mr. Shaw might be induced to publish if his present undertaking succeeds; and we cannot see a more acceptable gift by a settler to his friends at home than a pictorial representation of his new abode. The present painting is an exact representation of the Town of Dunedin, and deserves to be published on that account alone, as it will have the effect of counteracting the impression made on the minds of our friends at home by the absurd thing we have seen called a "View of the Upper Harbour of Otago," in which is represented a range of snowy mountains on the east side of the harbour, under which the artist should have written, "N.B. — These are meant for clouds."
This reminds us of a good story of the Tyro, who, having painted a horse, made its tail so long as to be under the necessity, to prevent its being mistaken for an extra leg, to intimate upon the article itself that it was the tail. Such caricatures may be very amusing in Otago, as illustrative of the efforts of an amateur artist, and of his excessive conceit in bringing his works before the world; but it would be far better for the public to pay for a sketch to be done well than accept such caricatures gratis. We do not wish to discourage amateur artists, but we think they might use a little more discretion in the publication of their efforts, as practice may in time partly supply the place of genius. 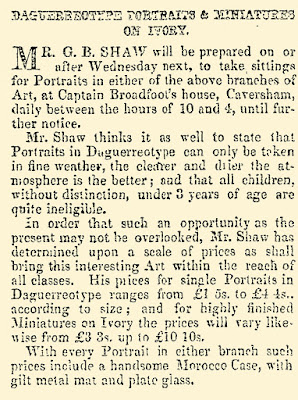 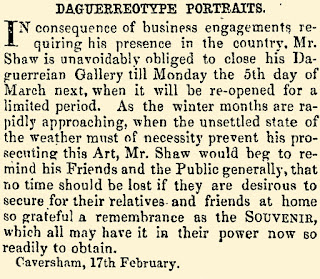 
George Baird Shaw (1812-1883), painter and printmaker, arrived in Australia in 1856. Born in Scotland, Shaw received his first training in art from his father, an amateur painter who later sent George and his brother James to train at the Academy of Fine Arts in Trieste. Back in Scotland, Shaw produced engravings for publications such as Chambers Biographical Dictionary of Eminent Scotsmen (1835), as well as engraved portraits of Sir Walter Scott and others. In 1850, Shaw emigrated to New Zealand, remaining there six years before coming to Australia. He exhibited with the South Australian Society of Artists in 1857 before moving to Sydney where he completed a series of engravings of portraits of politicians, clergymen and others. Shaw also worked as a watercolourist, specialising in landscapes, and exhibited three landscape works in the Sydney Intercolonial Exhibition of 1870. It is also thought that Shaw trained as a photographer in Edinburgh, although it is still to be established whether he practised photography in Australia. Examples of his portrait engravings are held by the National Library and the Mitchell Library, State Library of New South Wales.
National Portrait Gallery, Canberra, Australia