Trentham Camp
There is a constructed street in the camp, and within a short space of time buildings will face it to its full length on both sides. It is called MacChrystall’s parade, after the genial captain of that name. During the previous camps photographers were allowed to do business with the men, and in many instances the visitors, after receiving deposits for photographs, never put m an appearance again. In order to prevent the men being swindled in future. Colonel Potter has provided buildings for two recognised photographers, and a proportion of the rent received for the use of the premises is being added to a fund, to provide the men with, dainties when at sea.
New Zealand Times, Volume XXXIX, Issue 8930, 1 January 1915 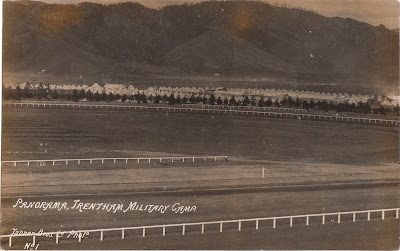 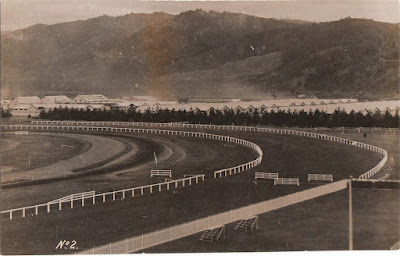 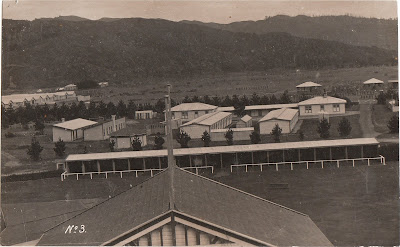 The military authorities, in case any misunderstanding exists, state that in order to guard against the troops in camp at Trentham being exploited by photographers of no stated business address, as was the case when the second reinforcements were in camp, they gave permission for photo studios to be erected on the reserve so that the commandant of the camp could have some jurisdiction over the business. There are other photographers who have also been given permission to ply their calling among the men in camp, and as these are known to be business men of standing in the community, it is not to be inferred that only those who have studios within the camp are of good repute.
New Zealand Times, Volume XL, Issue 8942, 15 January 1915


Owing to misunderstandings which arise between photographers and their clients at some military camps, the authorities in control of the camp at Trentham are taking the precaution of appointing (by tender) an official photographer. By thus selling the rights, a distinct advantage is given to the successful tenderers, while it also protects the men. On previous occasions peripatetic, photographers whom no one knew would snap a group of the men and then collect deposits on the photographs which were to be sent, but which too often "miscarried" in the post! With a photographer of repute, this is not likely to happen.
North Otago Times, Volume C, Issue 13198, 21 January 1915


... The business portion of the camp is still expanding, and among the latest shingles to be hung out are those of a couple of photographers and a lawyer...
Dominion, Volume 8, Issue 2411, 17 March 1915


Three photographers have pitched camp in this new Eldorado, and one can "snapped" in careless camp attitude, or photographed in full war paint, as he desires.
Timaru Herald, Volume CII, Issue 15695, 1 July 1915


Another task accomplished is the erection of the long row of shops, under one continuous roof, on the northern side of the residential area. In this numerous businesses have been established, including three jewellers' shops, three photographers', and two barbers' shops with eight chairs each.
Evening Post, Volume XC, Issue 48, 25 August 1915

The Voice of Trade.

It is 8 p.m. and a photographer, sitting among miscellaneous pictures of military health and handsomeness, is weary of his loneliness. Merry music from a hall across the roadway does not stir him from his melancholy reverie. Somehow the world is awry with him this night. Be has a grievance, half humorously, that men are allowed some days' leave to go home before they march to the transports. While away they may be photographed by outsiders, also certain crafty artists in the city offer lures of a free photograph. Further, when recruits come to camp they may not receive uniforms for a fortnight. Later on they may be everlastingly in denims— raiment— as soon as they jump into uniforms they fly off to town. The great problem of the photographer is to catch his bird in uniform, but he mentions sadly that the hours are a hindrance. From reveille till 8.30 a.m. he may open his doors, but who wants to be taken at-that time? During parade hours no business is permissible. During the two or three weeks preceding the departure of transports the little studio is a lively place as the proprietor admits, and one suspects that the profits at other times are good enough.
New Zealand Herald, Volume LII, Issue 16068, 6 November 1915 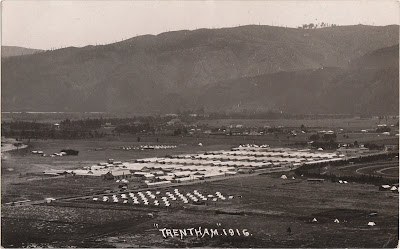 Trentham 1916
by an unknown photographer 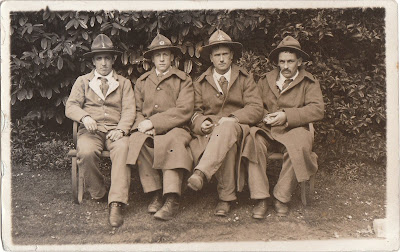 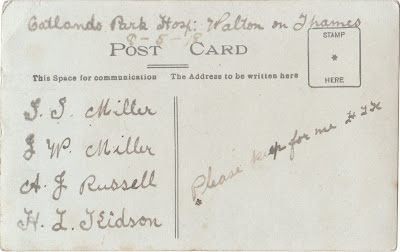 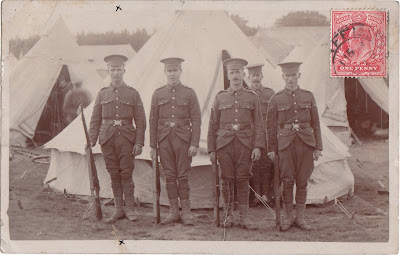 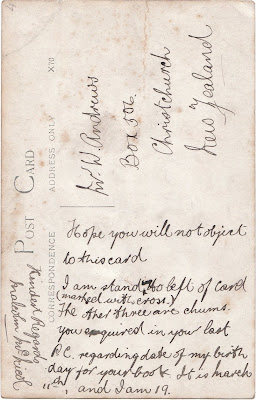 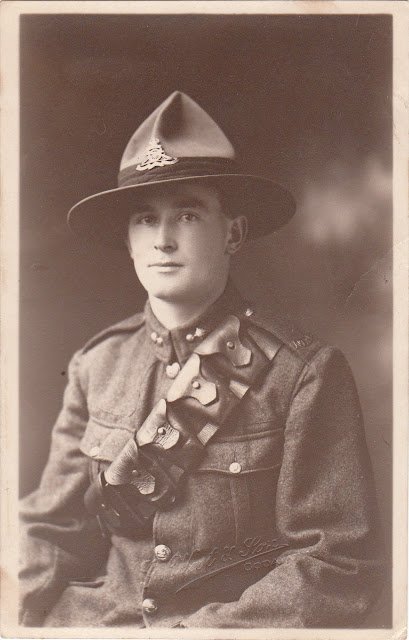 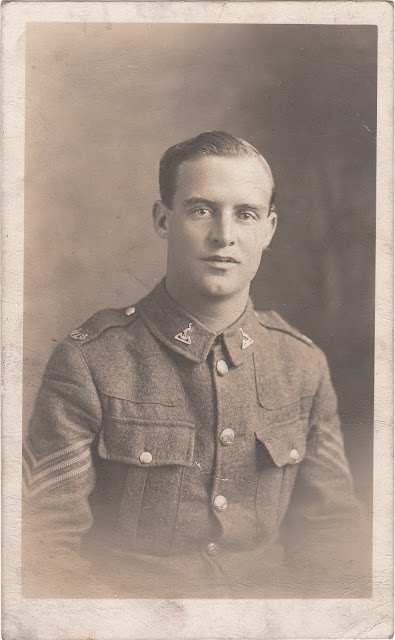 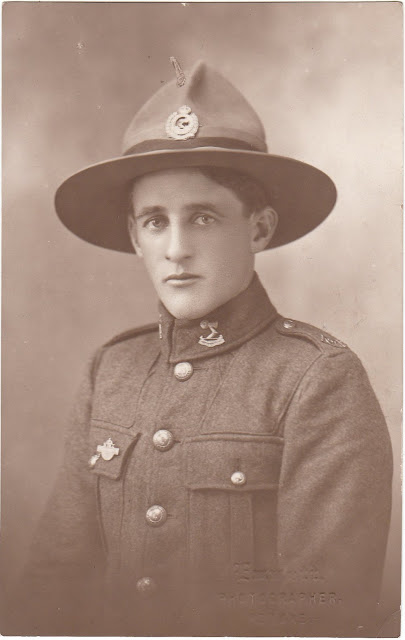 This un-named soldier photographed in Petone wears the hat and collar badges of the 3rd Auckland Regiment (Countess of Ranfurly's Own) and also a New Zealand Returned Soldiers' Association lapel badge. 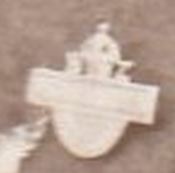 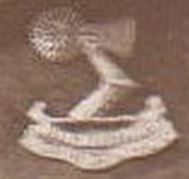 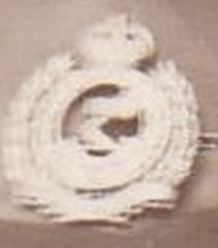 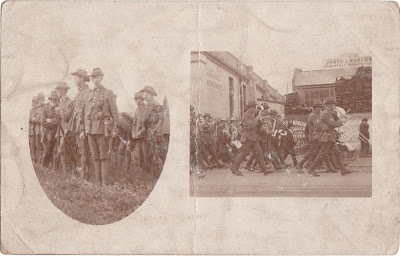 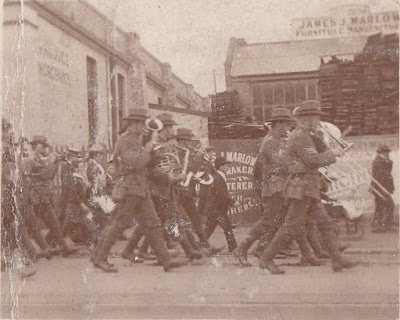 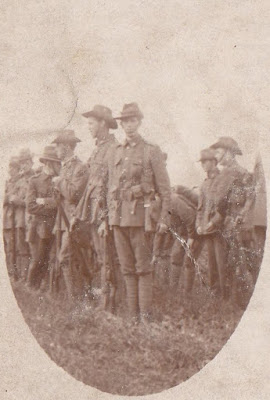