about August 1857 to March 1860,
succeeded by William Meluish 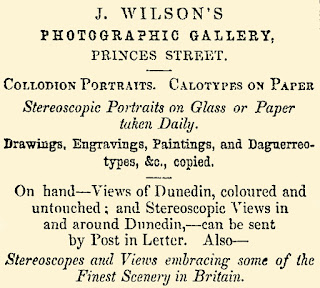 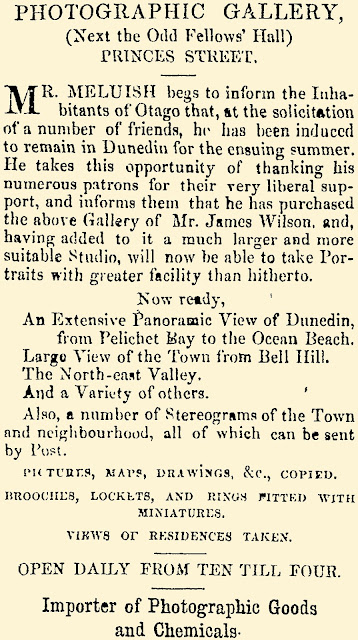 Mr James Wilson, who died at St Clair, Dunedin, on Saturday, aged 80 years, is said to have been the first man to open a photographer’s shop in Dunedin, also the first to run a cab service there. He was best known in both islands as a brewer. He managed the Well Park brewery at the Water of Leith in the early Otago days, and in recent years he was the brewer at the Egmont brewery.

The death of Mr James Wilson, at St. Clair, recalls events of early Dunedin. There is a common belief that he built Wellpark Brewery, on the Water of Leith. That is not the ease. The brewery was erected by his brother-in-law, George Duncan and when Mr Duncan left for a trip to England he let it to James Wilson on a partnership arrangement. Mr Wilson was not a brewer by training. It is understood that before he came out from Aberdeen he was employed as a schoolmaster.

In Dunedin he became first known as a photographer, having a business of his own in Princes street. Mr Geo. Duncan at that time owned a livery stable that ran through from High street to Rattray street, on the site now occupied by Butterworth Brothers, and Mr Wilson employed part of his leisure in keeping the books of the stable business for his brother-in-law.

One day Mr Duncan, who had many irons in the fire, suddenly made up his mind to give up the stable, and he transferred it for a nominal consideration to Mr Job Wain and Mr Wilson as partners. As there was money to be made in this concern, Mr Wilson sold his photograph business to Mr E. Melhuish, so as to be able to put in his whole time at the stable.

The partnership ran a profitable course for four years, and, if we are informed aright, it was during that term that Mr Wilson started the regular cab business in this City. Mr Wilson was of an enterprising nature, and after a while he put money into starting a nightsoil depot on the road towards Anderson Bay.

But it is as a brewer that he is chiefly remembered. As above mentioned, he managed the Wellpark Brewery during Mr Duncan's absence. Sam Ledgerwood was in actual charge as the skilled man. When Mr Duncan returned to New Zealand he sold out his interest to Thomas Birch. The firm of Wilson and Birch subsequently underwent another readjustment, Mr Birch dropping out in favor of Mr Maddox, a young man from Home, who after a while sold his partnership and went to Australia, leaving Mr Wilson the sole owner. As their business grew the premises became too small, and the owners closed their malt house at Wellpark, arranging to do their malting in a free store in Rattray street that had been used for the storing of Californian flour and other goods.

That was the beginning of the beginning of the establishment now famous throughout Australasia as Speight's brewery. There is another and a personal connection between the old malthouse and the present brewery for Mr James Speight and Mr C. F. Greenslade started the foundation of their fortunes when they became associated with Duncan and Wilson. That was in 1865 or 1866. In 1870 he was elected to the City Council as a member for Leith Ward, but resigned in August of the same year. After the lapse of years Mr Wilson dropped Wellpark and was for a few months in the employ of Speight and Co. Things had changed and reversed positions. Later on Mr Wilson started a brewery in Invercargill.

After that he settled in New Plymouth as brewer at the Egmont Company's brewery. In course of time he revisited Dunedin to see his relations and search for a recovery of his health, but the illness that had troubled him took a serious turn, and he was not able to set back to the North. For the last 18 months he had to keep to his room, physically helpless for most of the time, but mentally quite bright. He passed away peacefully between 4 and 5 o'clock on Saturday. Mrs Wilson survives her husband, and there are four sons and two daughters living, one of the sons being a doctor, and another (Charles) now making malt in the establishment where his father began as a brewer.