Claimed to have been the manager for 2½ years to H. Bartlett, the leading photographer, Wellington and Auckland [3], probably refers to William Henry Bartlett.
Christchurch - succeeded by Claude Ring about January 1919
Timaru - succeeded John Ernest Pigott [formerly the studio of John Milne Allan] about April 1919.

The Auckland branch of Archives New Zealand has the probate file for Walter Clegg, photographer dated 1945. 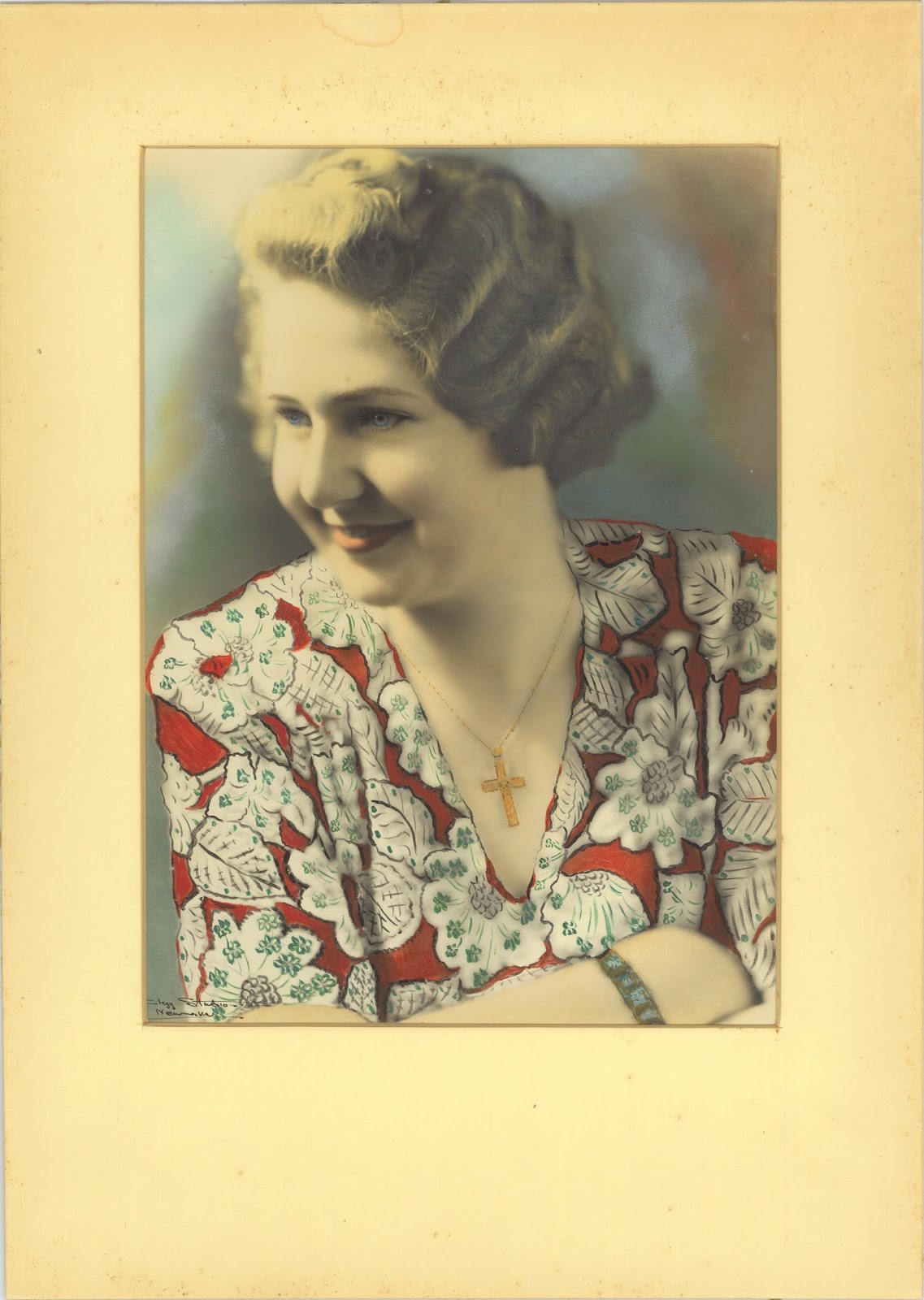 Photographer's Assistant
The qualifications of a photographer's assistant was the subject which occupied the attention of Mr. E. Page, S.M. yesterday afternoon Richard Buckingham Trindall Richardson (Mr. W. D. M. Glaister) sued Walter Clegg (Mr. Haddow) to recover £19 10/ for alleged breach of contract, or, as an alternative, for wrongful dismissal. The evidence for the plaintiff was to the effect that on the 13th of October, defendant agreed to employ him for at least three months. On the 20th of October defendant notified plaintiff that he did not intend to carry out such, agreement. In the course of the evidence it was stated that the plaintiff was to receive 30/ per week as a skilled assistant, and a number of photographs were handed in to show the quality of the work he had done. The defence was that the plaintiff was not equal to doing the work expected from a skilled assistant. The sum of 30/ had been paid into Court in full satisfaction. His Worship allowed plaintiff the 30/ paid in, and gave judgment for defendant, with costs. 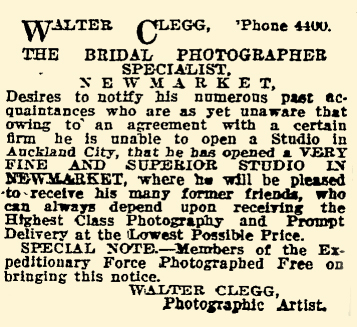 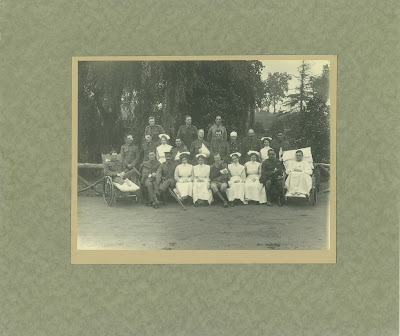 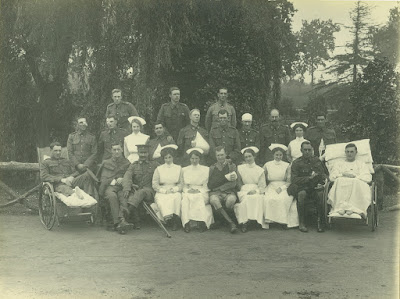 MODERN PORTRAITURE.
SOMETHING NEW AND EXCLUSIVE.
The Acme of Artistic Art.

The picture-portrait is a department of art which during recent years has made great developments. What these improvements have amounted to lately is fully learned by a visit to the new photographic studio opened by Mr Walter Clegg, in Stewart Dawson and Co.'s new building.

Certainly a combination of circumstances have contributed to Mr Clegg's coming to Christchurch. In the first place Messrs Stewart Dawson and Co., in their desire to have their building fully up-to-date, spared no expense in making the photographic studio on the top storey as it ought to was designed by the architect with the special object in view of proving a real 20th century studio, and as such it comprises every feature essential to the producing of first-class picture portrait work.

Of the many applications for tenancy of the studio, it was only reasonable that care should be exercised in the selection of an artist photographer who had had experience and possessed ability to establish a business on a standard fully in keeping with both the up-to-date building and its popular proprietors. The man chosen was Mr Walter Clegg, one of the Dominion's young and promising artist photographers.

Mr Clegg's experience in his profession is certainly interesting. He studied the art in the Old Country, and has all along taken a keen interest in everything pertaining to tho artistry of photography - he is not the type of man to be satisfied with the purely mechanical photographic reproductions; he has striven for, and has achieved something infinitely greater and grander than the commonplace in reproductive art. A few years ago, on the advent of colour-photography, Mr Clegg visited the various centres of New Zealand instructing the leading photographers in the "latest" - at that time - processes of photography.
Now, however, Mr Clegg is executing a totally different style of work by a process which is exclusively his own, and has been protected by him. The artistic effect is certainly grander than anything previously attempted in portraiture. The new process is known as Indiaproof Blue Sketch Portraiture. One's first impressions on seeing the beautiful samples of work executed by Mr Clegg are that this new system is, indeed, the superlative of colour-portraiture. Finished off in sepia on a white background, the blue sketch effect so pleasingly executed gave that touch of hand-finish so much appreciated by artists. It was, indeed, the work of an artist, and Mr Clegg explained that, of course, the effect involved very considerable handling of the negative, in addition to his exclusive and patented process of printing. The wonder is, in fact, that considering the amount of professional skill and detail of work involved, the prices of this particular class of portraiture should be so reasonable.

The exclusive features of Mr Clegg's studio are apparent at once to the visitor. The electric lift, entered on the ground floor of Messrs Stewart Dawson's building, takes one to the top flat, and ushers one into the reception room of the studio. The fact that patrons have thus no steps to climb, and that the studio is so easy of access, is an item fully appreciated by all. The greatest feature, however, is undoubted in the fact of the studio having such a beautifully clear light. It is the highest photographic studio in the city and as such has no disabilities and disadvantages caused through the darkness and shadows of adjoining buildings. The advantages of the brilliance of light are also easily understood. In the first place it gives Mr Clegg the benefit of a long working day, as patrons can be photographed well on until dusk. This, Mr Clegg explained, ofttimes suited those who were not free earlier in the day. And, moreover, since superlative photographic results depend to a great extent on the clearness of light undiluted by smoke and fog, Mr Clegg has all the advantages of Nature in his favour to assist him in producing highclass work.

But to Mr Clegg this abundance of light proves still more so. Having come to Christchurch as a medallist in children's portraiture, the particular natural advantages of his studio permit of instantaneous photography, and will conduce to the executing of some very fine work in reproductions of child life, Mr Clegg, managing one of the leading Auckland studios during the past three years, gained the reputation of being one of the Dominion's foremost artists in this as in other classes of photography.
Press, Volume LIV, Issue 16185, 13 April 1918, Page 10 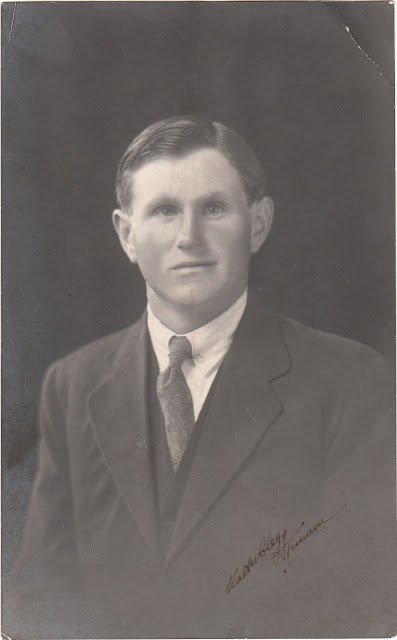 To Mr [and] Mrs Walker
from Fred 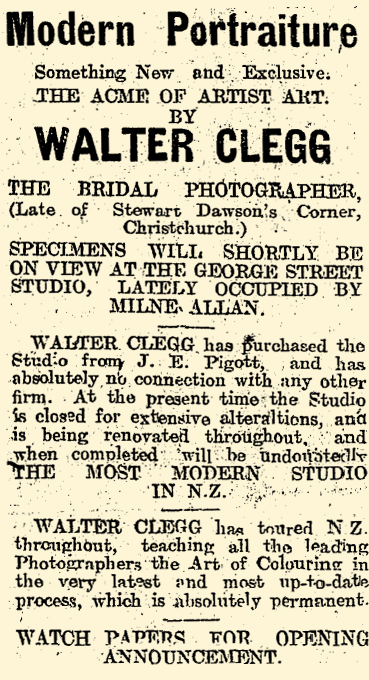 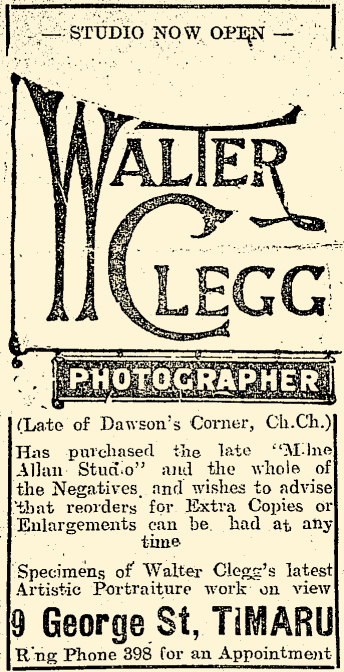 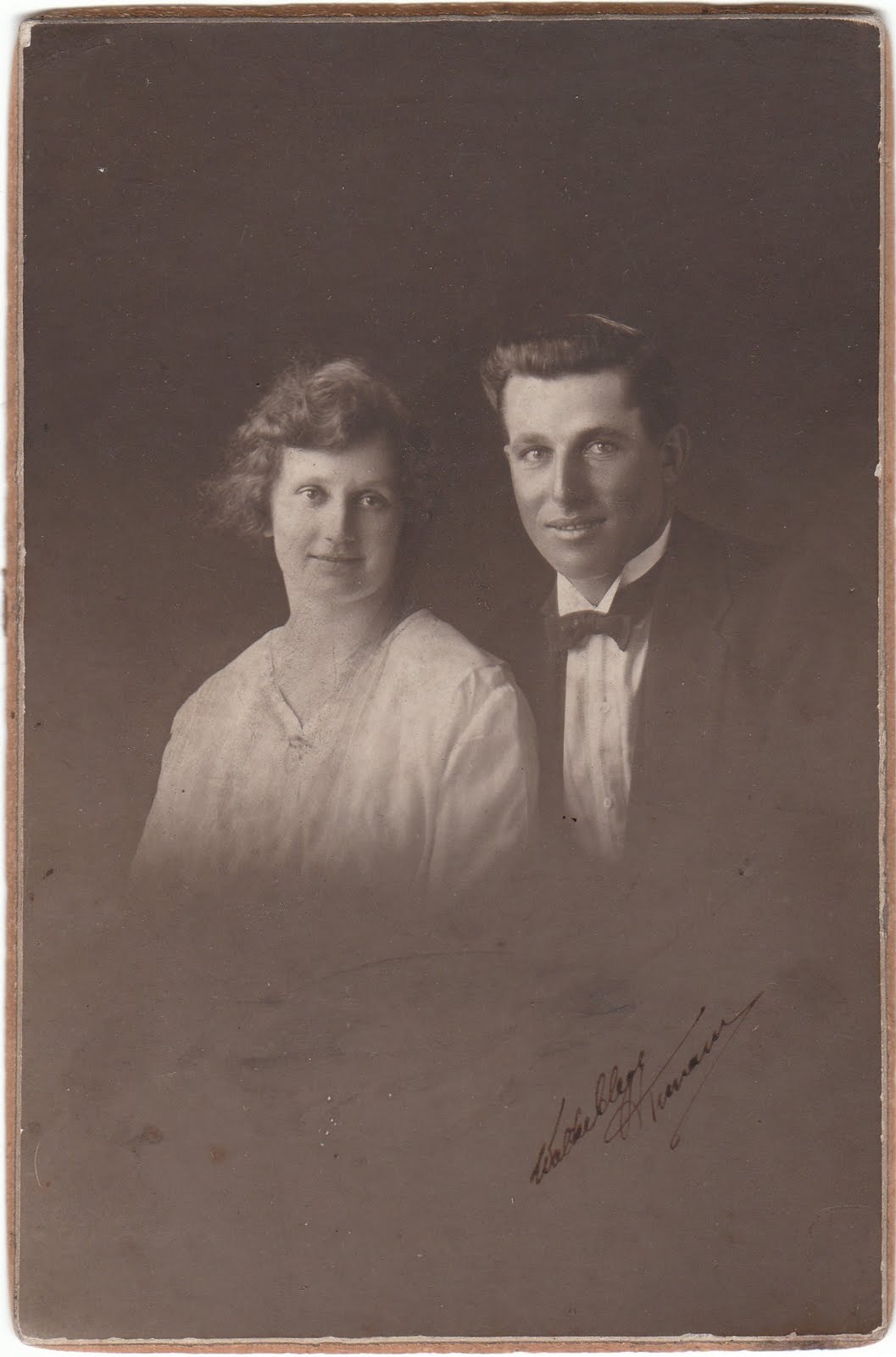 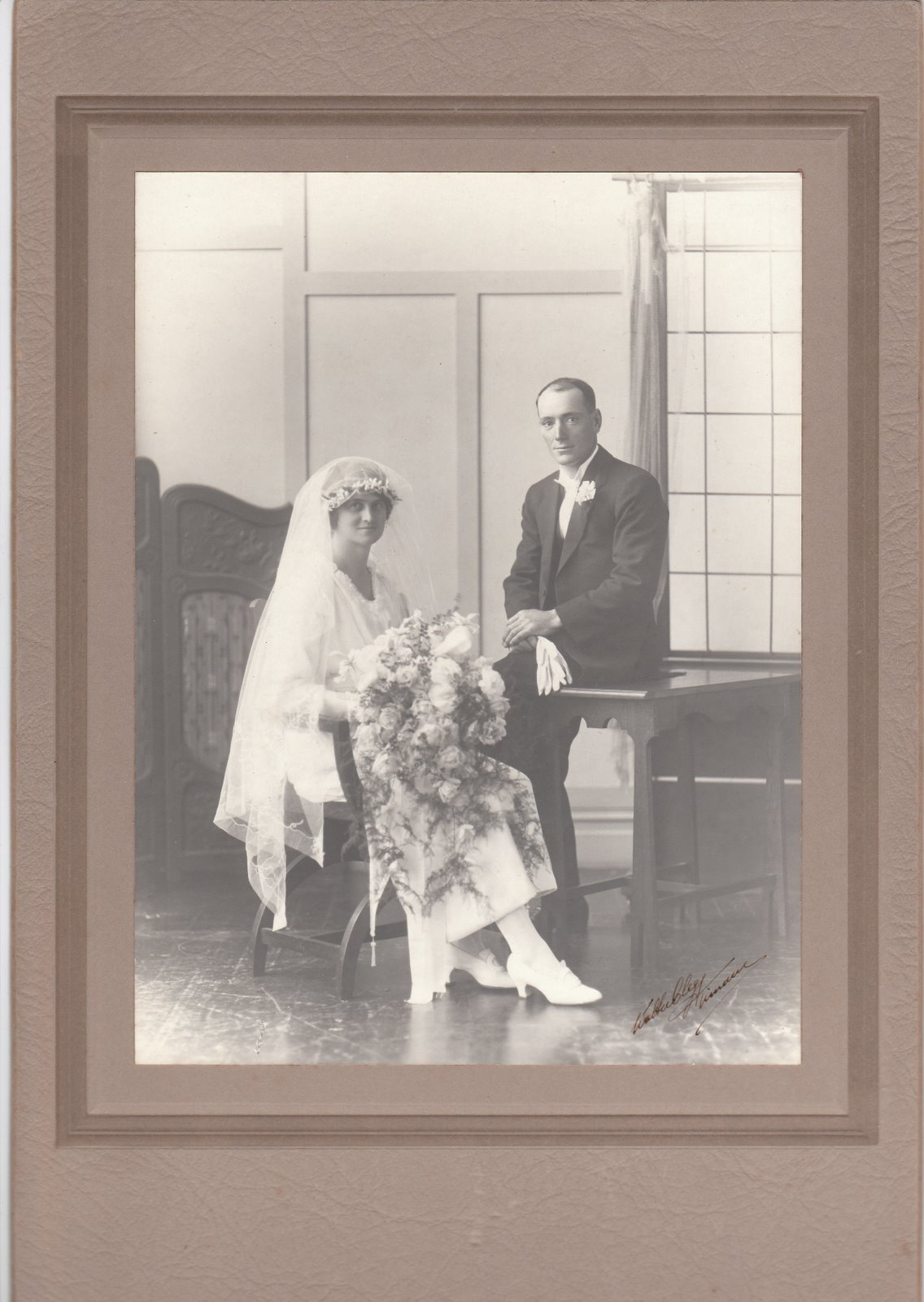 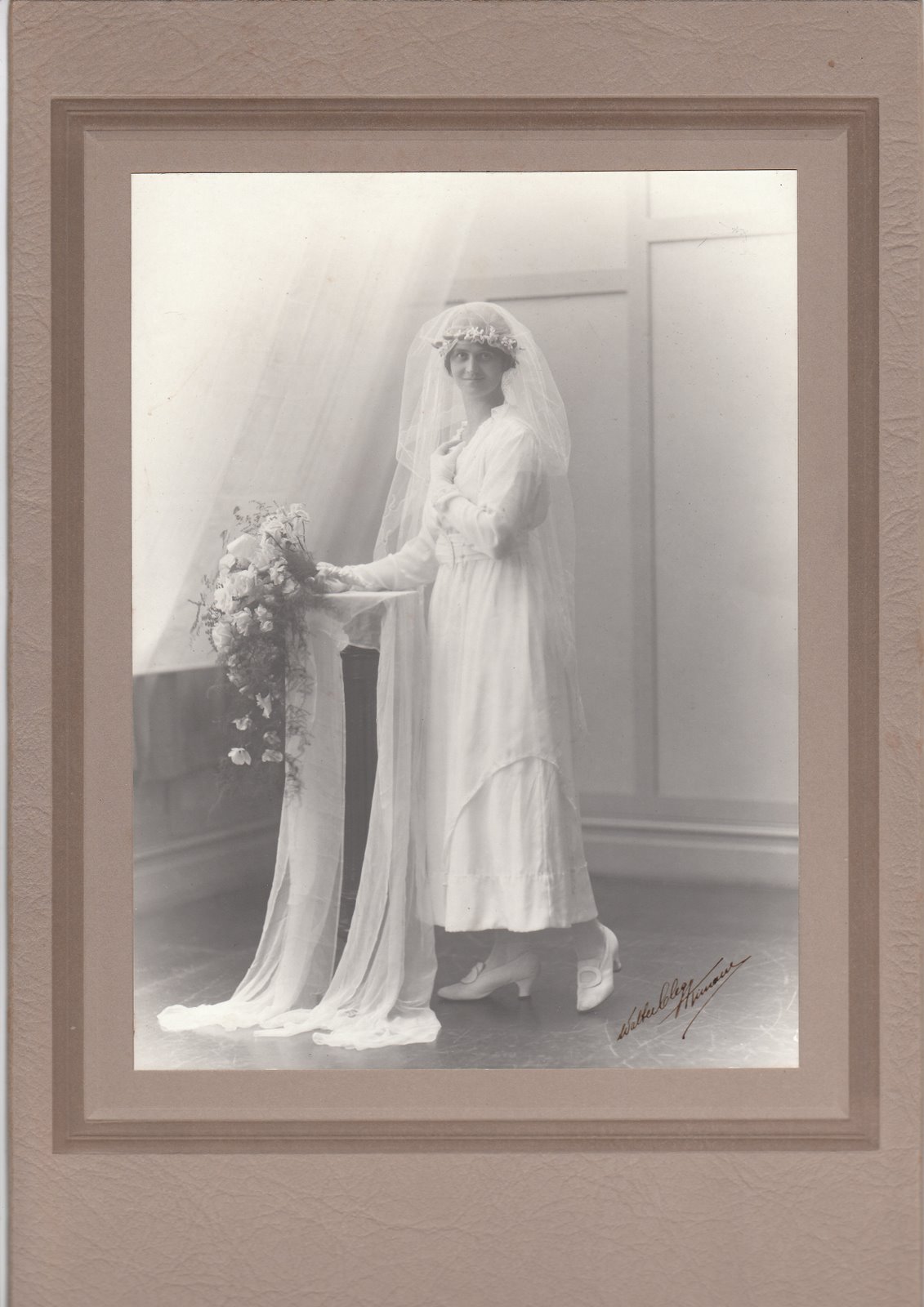 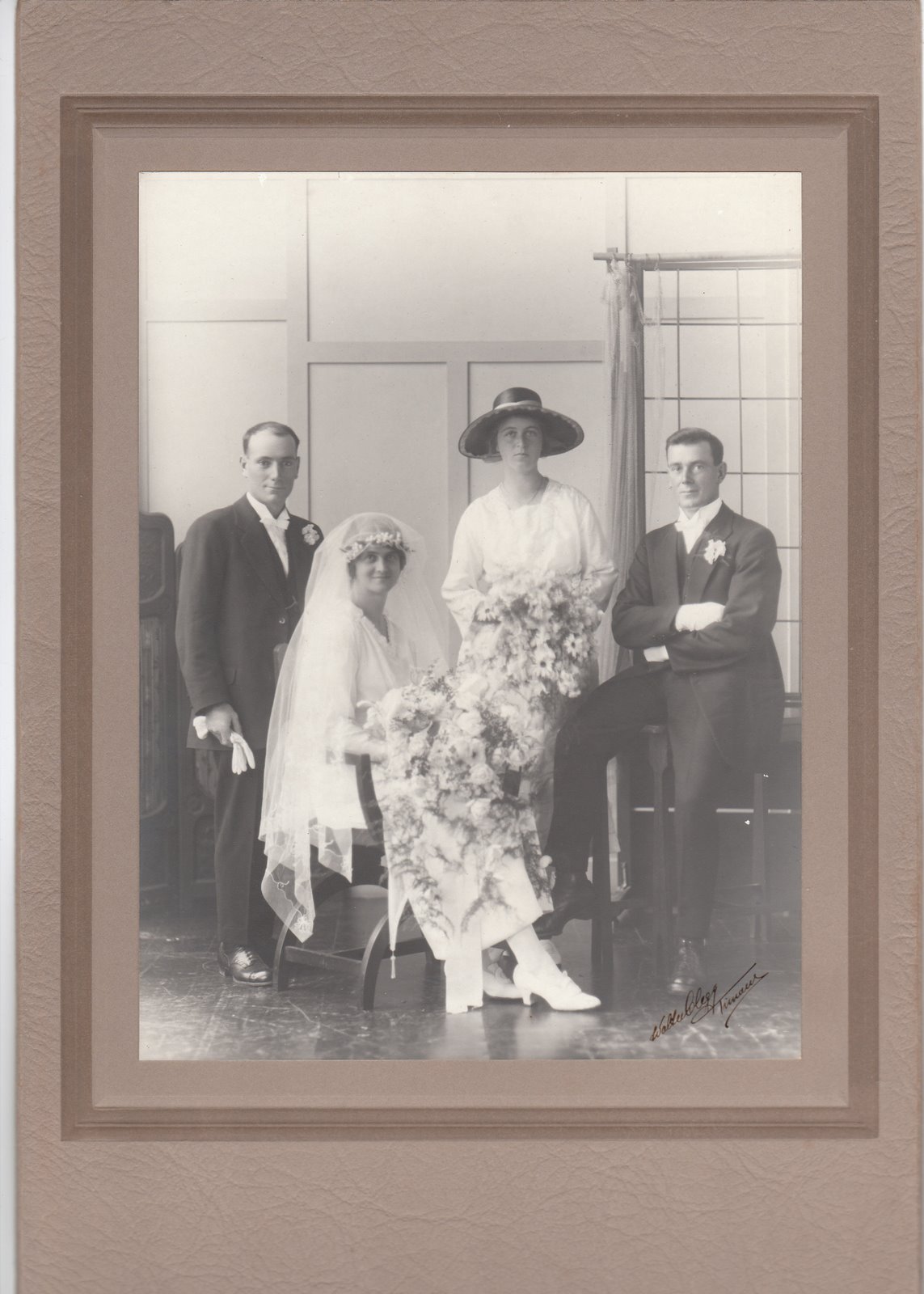 SUPERB PORTRAITURE.
In No. 9 shed a really charming display, one with a distinctive appeal, is that offered by the Bridal Studios (Walter Clegg). The wonderful portrait studies in gold tone and natural colours immediately arrest the attention of every visitor, the whole ensemble being a splendid example of the photographic art.

We need hardly remind our readers that the Bridal Studios are next to the Newmarket Post Office, where similar beautiful work is the order of the day with Walter Clegg. 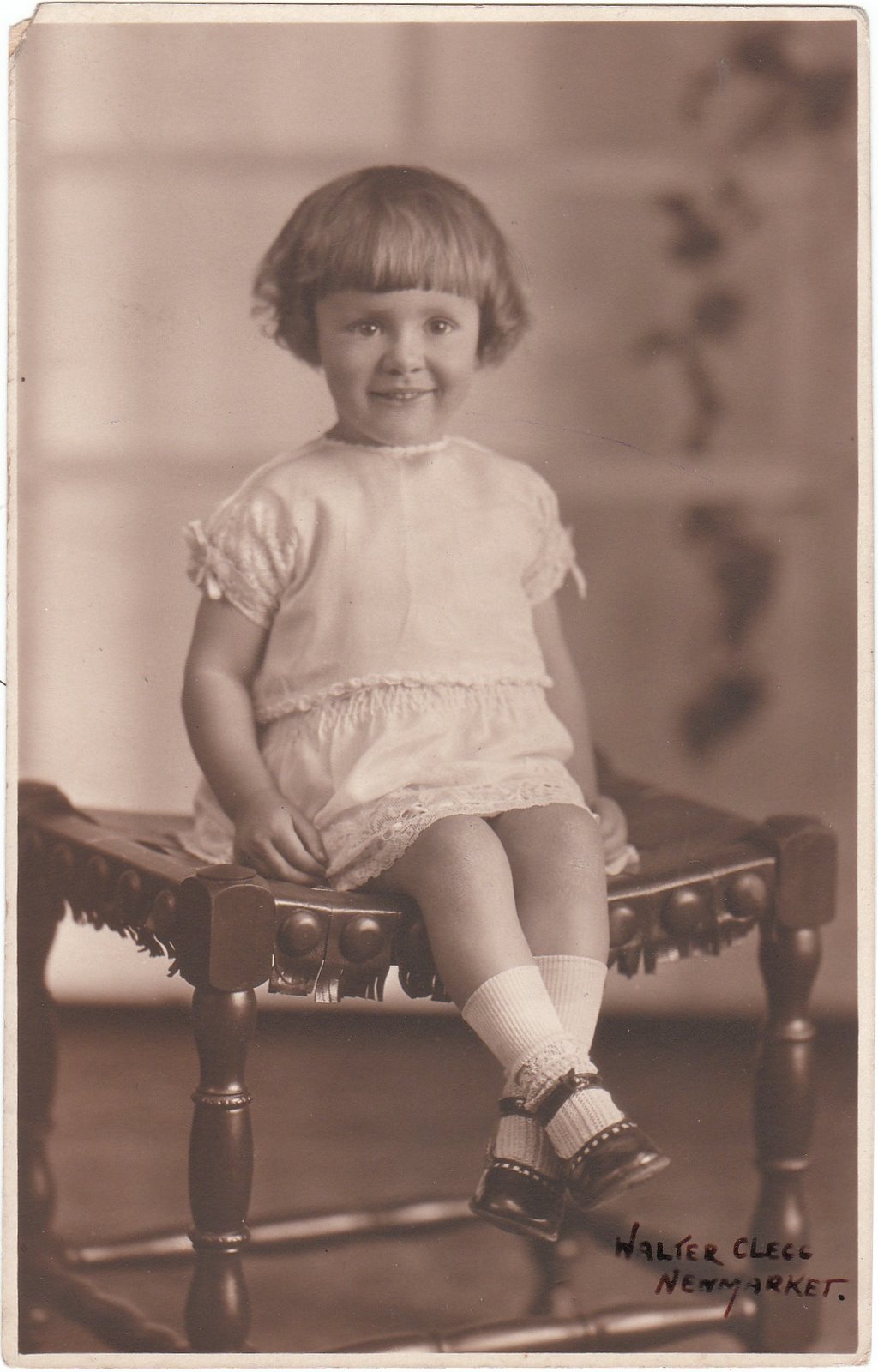 [1] Purewa Cemetery & Crematorium
[2] A quiet but pretty wedding took place on the 9th September, in St. Mary's Church, Merivale, the Rev. P. B. Haggit officiating. The bridegroom was Mr Walter Clegg, of Christchurch, and the bride Miss Joyce Edith Gover, youngest daughter of Mr and Mrs F. Gover, of Mt. Eden, Auckland. The bride, who entered the church on the arm of her father, by whom she was given away, looked lovely in a frock of artistic simplicity, the material being pearl white souple satin with a train from the shoulders of pale pink satinlined with ninon. She wore her mother's wedding veil of Brussels net arranged over a circlet of orange blossoms, and carried a bouquet of white cyclamen, maiden hair fern and asparagus, trails of the latter being tied with knots of pale pink ribbon. Her ornaments included the bridegroom's gift, a tourmaline pendant and chain. There were three bridesmaids, Miss Elsie Buchanan, the chief bridesmaid, wore a smart frock of saxe blue Georgette slightly braided and a quaint poke-shaped leghorn hat lined with terra cotta Georgette, the crown being composed of forget-me-nots of the same shade. Miss Price wore a pretty mastic coloured Georgette frock and a large black transparent tulle hat with ospreys to match her frock wreathing the brim. Miss. Beryl Crozier wore a dainty pale pink crepe de chine frock and black tagel hat lined with pink and wreathed with roses. All carried primrose posies and wore the bridegroom's presents, gold slave bangles. The bridegroom was attended by Mr Louis Crozier as best man, and Messrs. Walter Watson and Alex. Coltart as groomsmen. Mr Gordon Blackwell presided at the organ. After the ceremony the bridal party and guests were entertained by the bride's parents at a small morning reception at Broadway's, after which Mr and Mrs Clegg left by motor for their honeymoon. The bride travelled in a smart navy serge costume and pastel blue velour hat. Among the guests present were: Mrs D. Crozier in a black cloth gown, fox furs and smart black panne hat. Miss Rene Wake wore a navy serge coat and skirt, smart blue pedal straw hat trimmed with cherries. Miss Maud McCaldon, smart black and white coat and skirt, cream pedal hat. Miss Bennett, tailored coat and skirt, velour hat. Miss C. Fisher, navy frock, black pedal hat. Miss Gover, nigger brown silk frock, violet hat to tone with finishing on frock. - Observer, Volume XXXIX, Issue 3, 21 September 1918, Page 8
[3]  Timaru Herald, Issue 170172, 10 March 1920, Page 1
[4] Archives New Zealand, CLEGG, Walter - WW1 52316 - Army (R21895103)