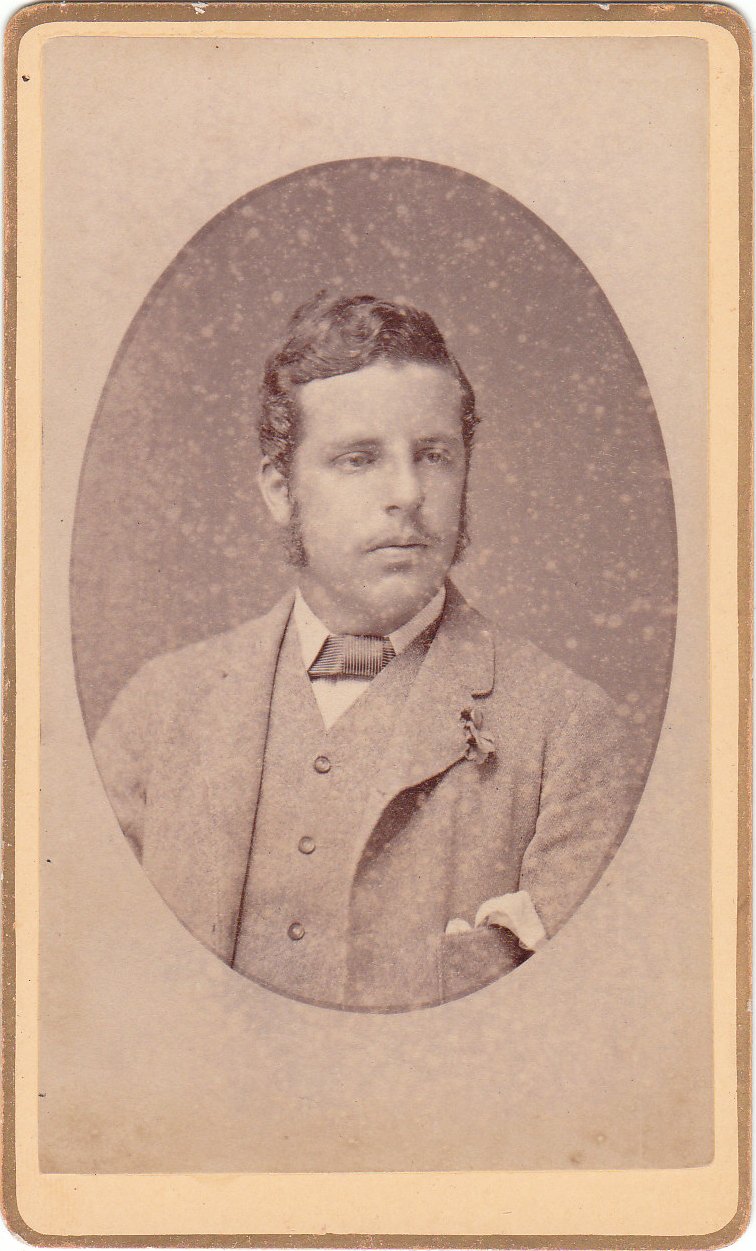 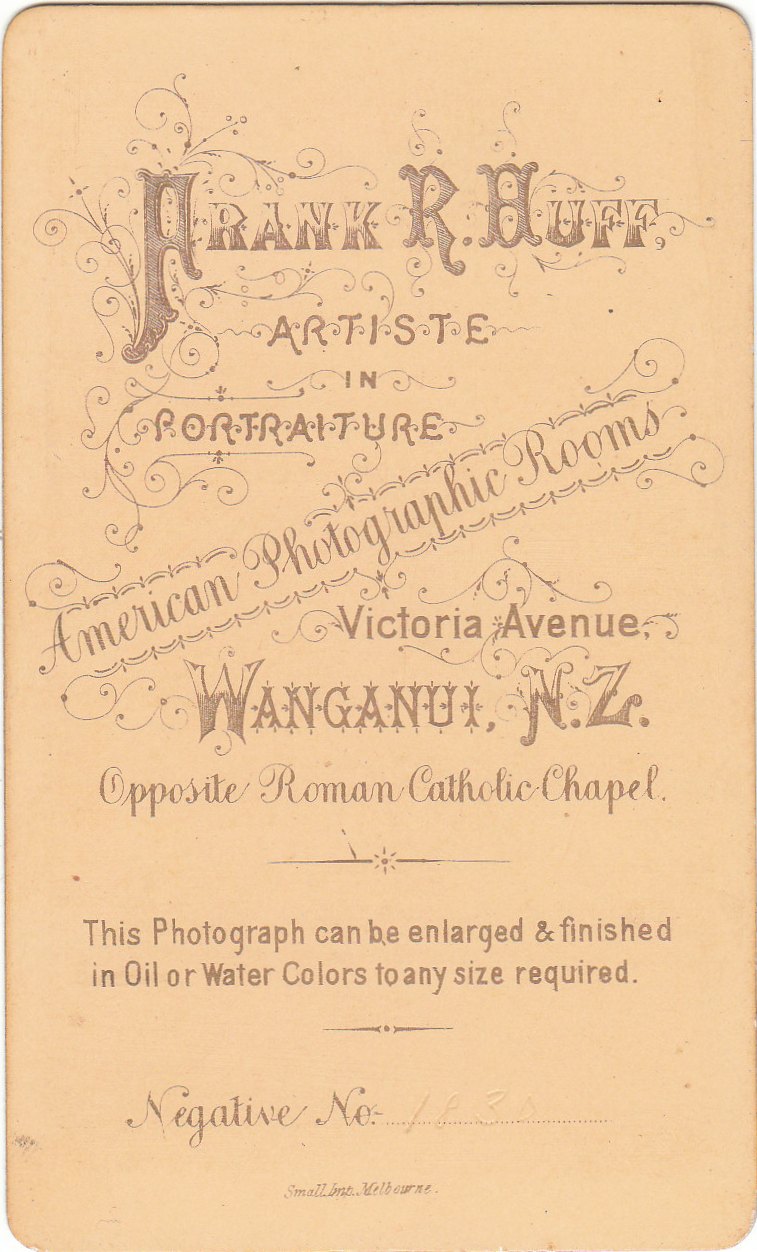 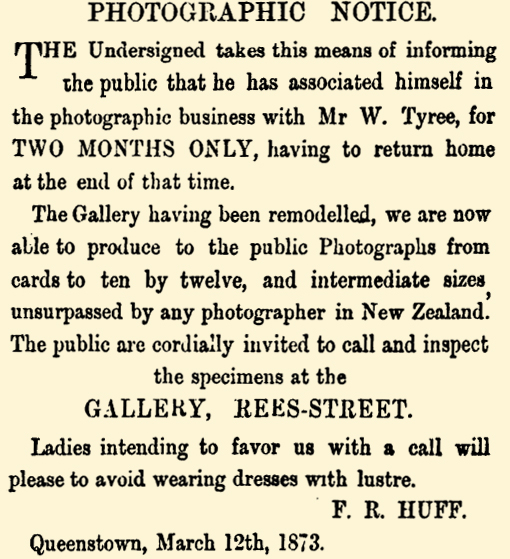 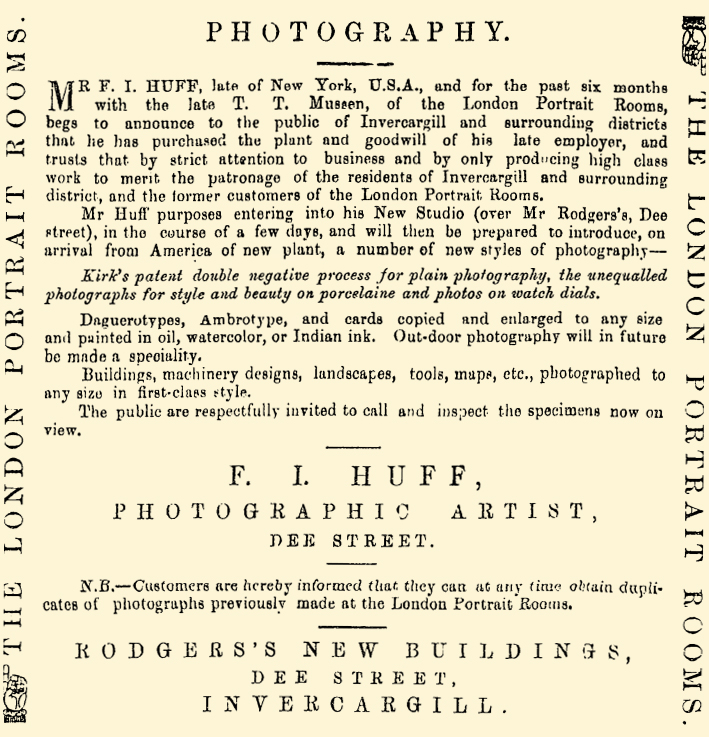 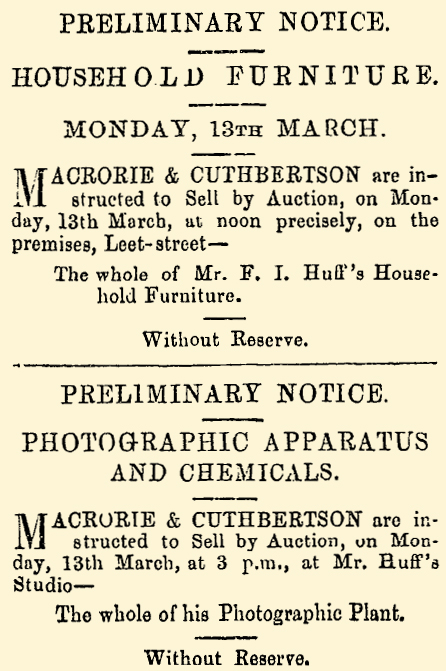 
Photography. Messrs Huff and Collinson have recently opened their American Photographic Rooms in Victoria Avenue, opposite the Roman Catholic Church. In the window are some fine specimens of the photographer's art, which will well repay inspection.


Mr Huff, of the American Photographic Rooms, showed us yesterday a thoroughly good photograph of the Wanganui Rifles, taken by him the previous day while the Company was drawn up in line, each man standing out clear and distinct. It will be a pleasant souvenir for members of the corps and their friends.


Photograph of the Wanganui Rifles - We have been shown by Mr Huff, of the American Photographic Rooms, Victoria Avenue, a capital photograph of this company which was taken by him on the Queen's Birthday. The locality chosen was the sandhills, Cook's Gardens, and the background of the picture are the hills on the opposite side of the river, the flagstaff being a little towards the left hand. The Red Lion Hotel and a portion of the river are also seen. The company, of whom seventy members were present, including the officers and band, were drawn up to receive cavalry, and they must have stood with remarkable steadiness, as the picture is quite free from the blurred and woolley appearance which is so often present in attempts to photograph large numbers of men. Every face can be very clearly distinguished, so that the picture will be a valuable record of the occasion on which it was taken. Mr Huff is to be complimented on his great success in producing such a capital and interesting work of art. 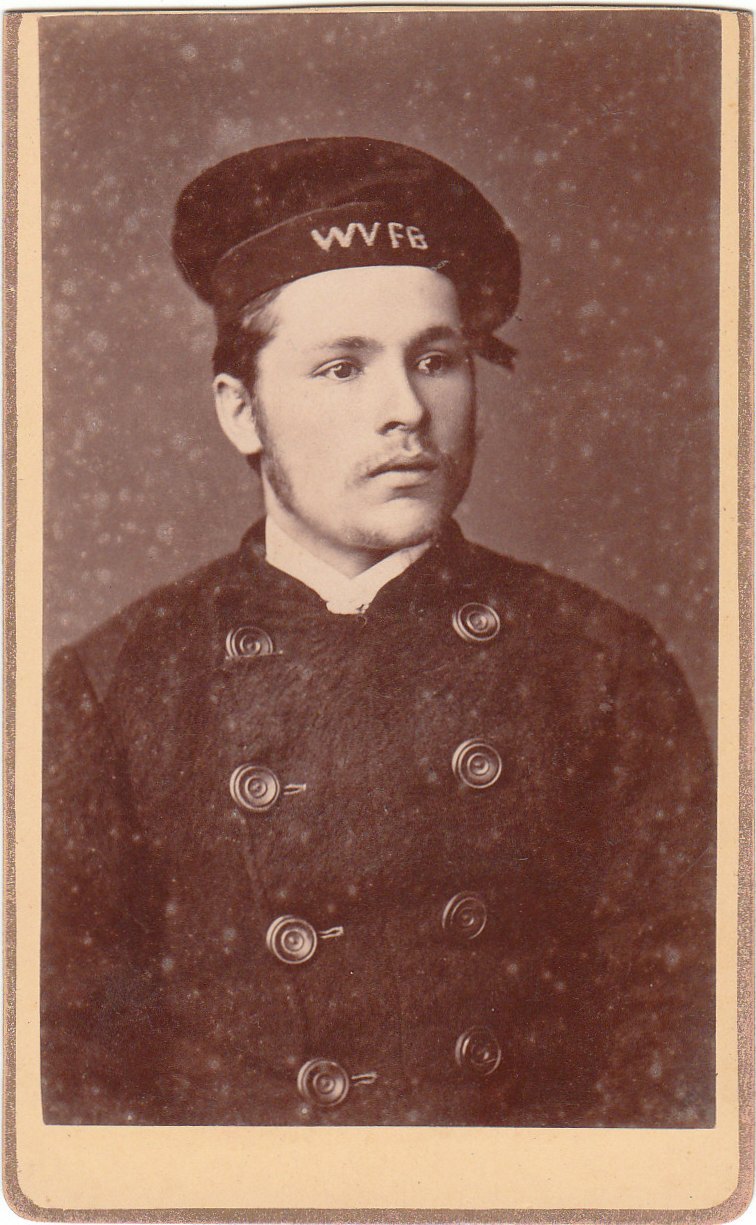 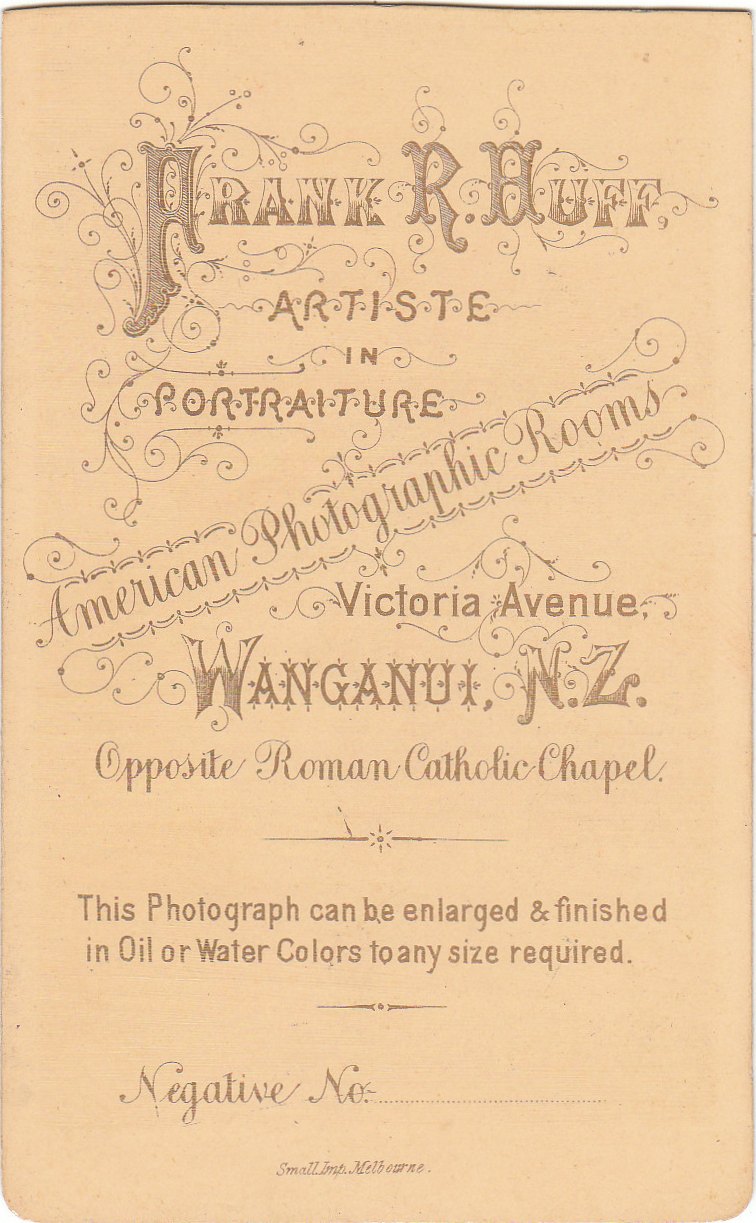 above - a member of the Wanganui Volenteer Fire Bridage 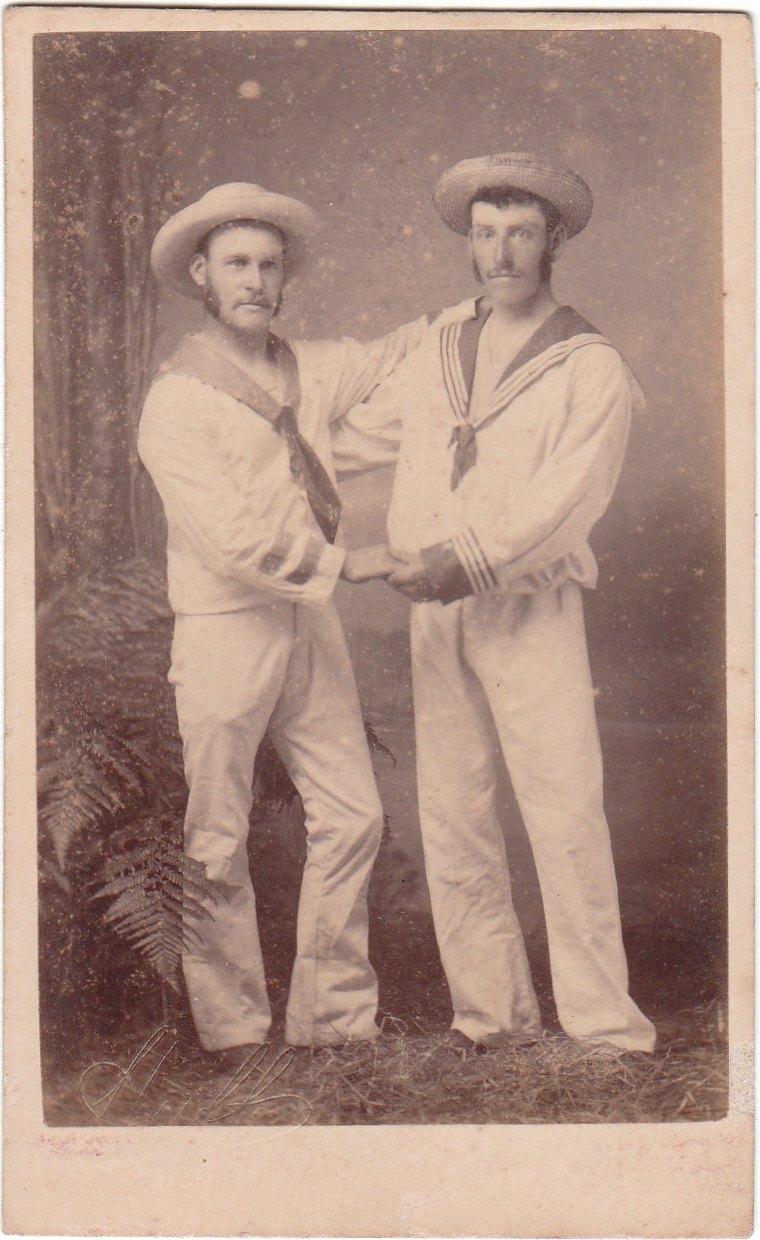 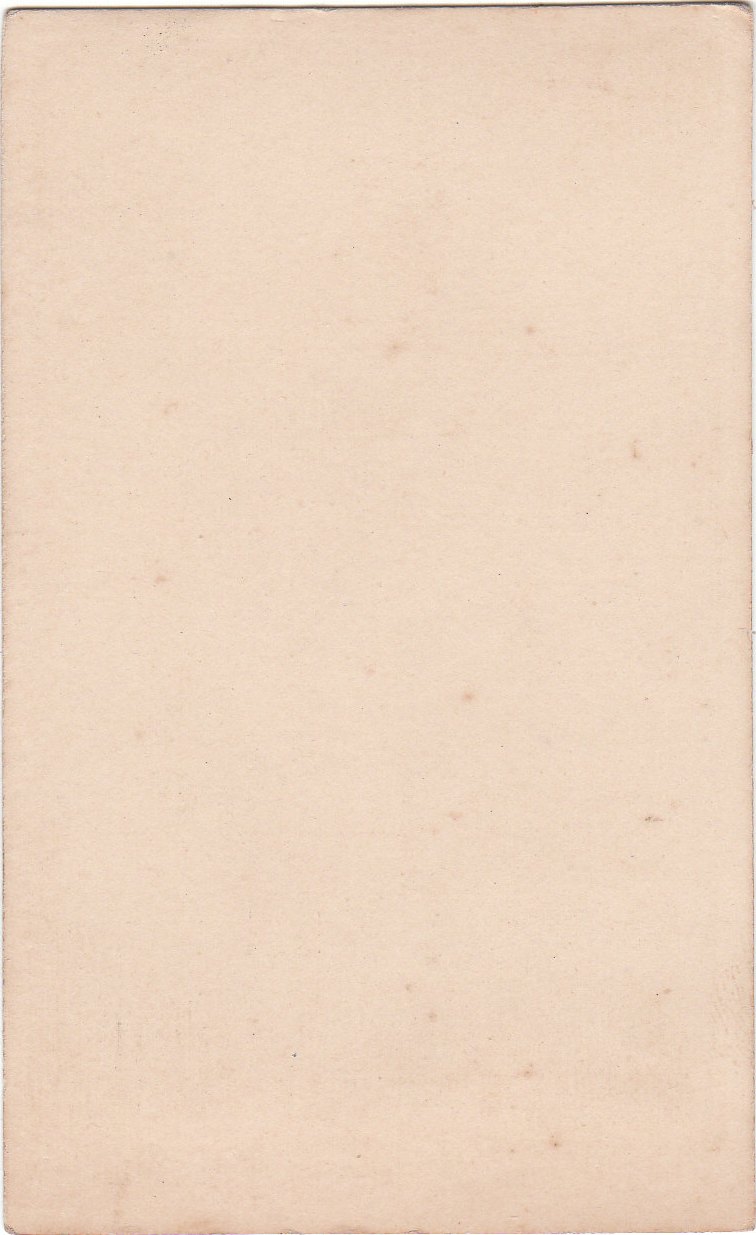 This carte de visite is blind stamped on the front lower left "Huff". It came with other photographs from the Wanganui and Marton area. 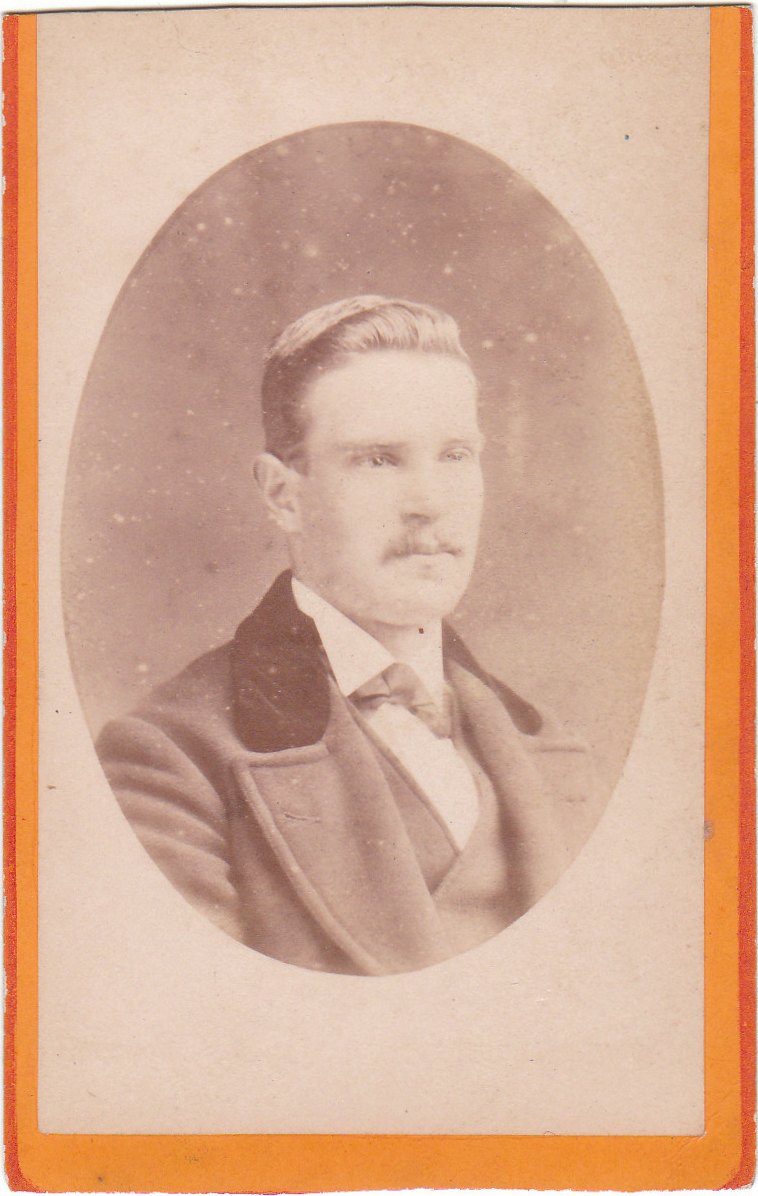 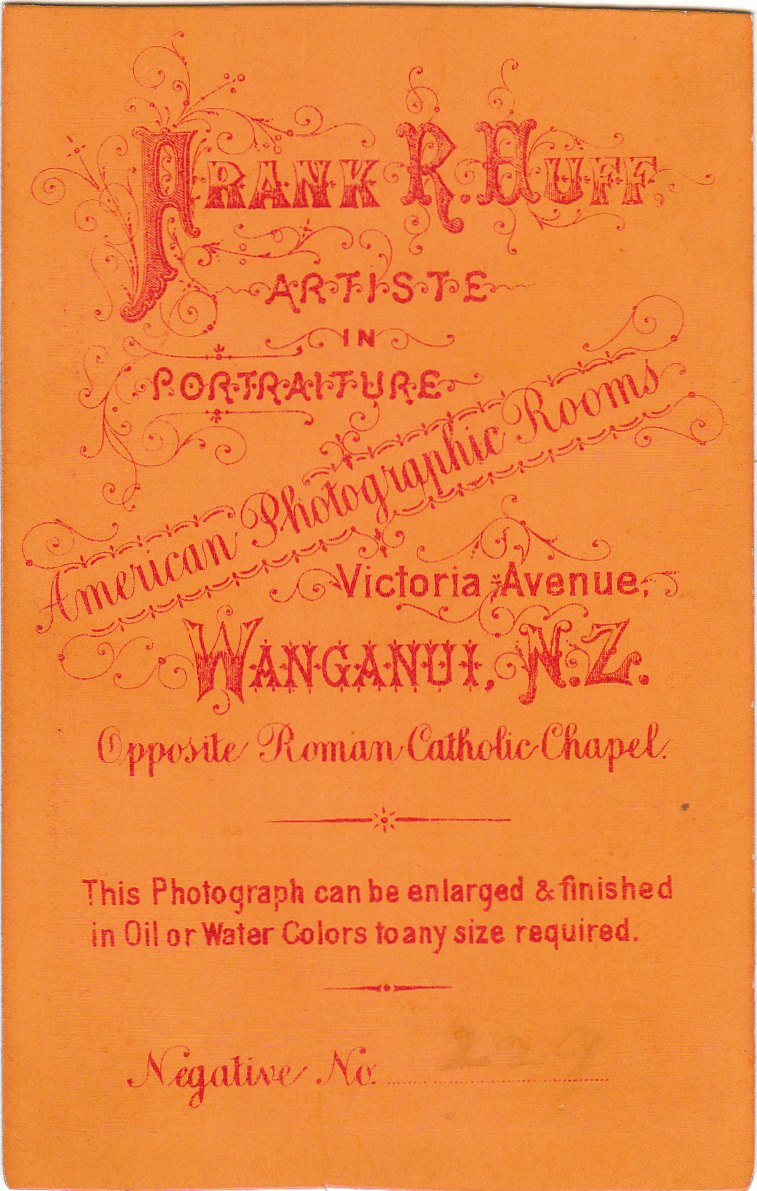 PHOTOGRAPHIC STUDIO
Mr F. B. Huff, photographer, of the Avenue, is determined to be abreast of the times in the matter of recent improvements in the art of photography, and, in order that he may have the requisite facilities for the production of the various descriptions of work, has taken a lease of the unoccupied section of land between Ainsworth's corner boot shop and Mr F. M. Spurdle's residence in the Avenue. Here he purposes erecting a fine two-storey building, after the style of the Wanganui Club, and having a studio of 30 feet in length, and of proportionate width in the upper storey. The plans of the building have already been prepared by Mr J. E. Wright, architect, and the building will be put in hand shortly. Mr Huff's lease of his present premises has only some four weeks to run, during three weeks of which time he purposes taking photographs as usual after which, while his new premises are being pushed forward, he intends taking a trip to the northern townships.

Mr Huff has not waited for the erection of his new premises, however, before providing himself with important improvements. For instance, he has dispensed with the old-fashioned system of taking photographs, by which the sitter was required to remain in a motionless attitude for an unconscionably long period before the result was achieved, which, even then, was not always of a very satisfactory character, the features frequently wearing a trained expression rather than a natural one.

By the new plates which Mr Huff has obtained, photographs are taken on the instantaneous principle, thereby conducting alike to the comfort of the client and to the artist, and to the faithfulness of the picture. By an ingenious contrivance known as a "pneumatic (or cadet) shutter" the artist is relieved of the necessity of standing in the immediate neighbourhood of his camera while the operation is going forward. Inside the camera is fixed a shutter worked by a spring, and to this is attached a narrow india rubber tube of any desired length, having an indian rubber tube at the end. Preparations for taking the photograph having been made, and the client having been inveigled, if we may so express it, into the most becoming attitude of form and  feature, the artist, without approaching the camera, squeezes the air-buld which he holds concealed in his hands, the internal shutter is forced up by the inrushing air, and lo and behold the sitter is astonished to find that the usually tedious operation is over, and with results in every way more satisfactory than could possibly be the case with the plates hitherto in use.

We were favoured by Mr Huff yesterday with an ocular demonstration of the quickness and efficiency of the process, and we confess to being surprised that scarcely any of the photographers in the large centres of the colony have as yet adopted this comfort-giving and time-saving process, the value of which is even more noteworthy in the case of infants' likenesses than in those of adults. The new process gives several other advantages over the old, one being that it is no longer necessary that a photograph having been taken, it should be worked up almost immediately to prevent the chemicals hardening. With the new plates several months might be allowed to elapse without damage to the picture. This obviously is a great boon to the artist, who is thus enabled to take the fullest advantage of the hours of sunlight and here again another benefit results, as even so late as five o'clock p.m., at this season of the year, Mr Huff finds no difficulty in producing first-class pictures. Some short time ago, finding the demands on his own time becoming too great to allow of his doing the finishing and colouring work, Mr Huff obtained the services of a thoroughly proficient lady artist from Melbourne, and is now able to cope with his increasing business.

We were shown by Mr Huff a number of really excellent oil-paintings, of large size, some of them being very handsomely framed. One of these is a capital likeness of the Rev. Father Kirk, and is, we understand, intended for presentation to the reverend gentleman by the members of his congregation. A life-like painting of Sir George Bowen, the colouring of which is thoroughly natural, is also among the number. There is also a fairly good painting of Sir William Fox, and an exceedingly good one, though of smaller dimensions, of Prince Albert.

As we have said, it is Mr Huff's intention, in his new premises, to devote attention to other classes of work for which his present studio offers no facilities.
Wanganui Chronicle, Volume XXIV, Issue 9646, 27 May 1882, Page 3 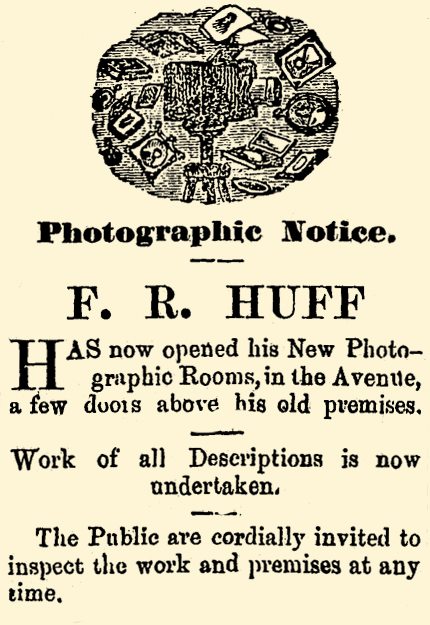 It is some time since we had a respectable photographer settled in the district for any length of time, and the news that a gentleman of that craft has taken up his abode here for a short time should be well received. Mr. F. Huff, the enterprising photographer of Wanganui, has decided to fill the want that is felt, and will open in Hawera for a short time, though he must return at the end of the year. He has had a studio erected and fitted up in Regent-street, next to Mr. Hutchison's office, which is well-finished and replete with every convenience for the work, so that those wishing to avail themselves of his presence may do so knowing that they will be as well treated as if they were in one of the larger towns.
Hawera & Normanby Star, Volume V, Issue 978, 13 December 1884, Page 2

Thank you very much for posting this information, as I research New Jersey photographers. Frank Huff grew up in Newark, New Jersey. His brothers Ferdinand and William were also photographers in Newark. In one of the ads on your webpage, Huff mentions using Kirk's double sided negative process. Joseph Kirk, another Newark photographer, was his stepfather. Frank Huff probably went to New Zealand to connect with his natural father, William G. Huff, who had left the family and settled in Queenstown, NZ. While Frank was in NZ, he married Priscilla Collins from Queenstown.