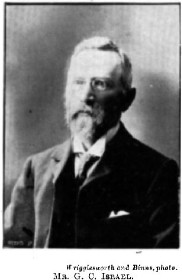 Mr. George Cashmore Israel, Manager of the North Dunedin branch of the Bank of New Zealand, was born in Launceston, Tasmania, and finished his education at the Church of England Grammar School. He served eleven years in the Bank of Tasmania, and joined the Bank of New Zealand at Dunedin in 1872. In February, 1875, he was appointed manager of the newly opened North Dunedin branch, where he is still in charge. Mr. Israel was for many years secretary of the Dunedin Choral Society, and was secretary to the Music Committee of the New Zealand and South Seas Exhibition of 1889; he has for thirteen years been a member of the Union Street school committee, being three times elected chairman. He has been twice chosen as President of the Dunedin and Suburban School Committees' Conference, and is now a member of its executive committee, and was also chairman of the committee controlling the school children's demonstration at the celebration of the jubilee of the province of Otago in 1898, and the great children's gathering on the occasion of the visit of the Prince and Princess of Wales. Mr. Israel, who was at the same time a member of the Royal Reception Committee, received special thanks from the Princess in connection with the latter office. He was one of the founders, and is now Treasurer of the Dunedin Competitions Society, instituted in February, 1903, for the furtherance of study in Literature, Music, and Art.

A Press Association message from Dunedin announces the death of Mr George C. Israel, the Chairman of the Otago Education Board. Mr Israel, who had turned three score years and ten, was; born and educated in Tasmania, but came to Dunedin about 44 years ago. There he entered the service of the Bank of New Zealand, being for a good number of years manager of the North Dunedin branch. He retired from the service of the Bank quite recently.

During, the whole time of his long residence in the city Mr Israel was actively associated with every public movement for the moral, intellectual, and physical elevation of the people, and never spared himself where hard work and persistent effort were needed to push ahead a good undertaking.

He was particularly active in all matters connected with education from the kindergarten to the University, and at the time of his death was Chairman of the Education Board, a member of the Otago University Council, the Otago High' School Board, and the Board of the Dunedin Technical School. These, however, were only a few of his activities, and many other city organisations will miss the zeal and energy of genial and most likeable George Israel, than whom few men in Dunedin had more friends and sincere admirers.

Mr Israel was married to a daughter of the late Mr J. W. Jago, and a sister of Lady Williams. Mrs Israel died a few years ago, leaving a grown-up family.

This is my family.
Jane Alexander Israel, née Jago is my great-grandmother.
Are identites for the portrait photographs known?
Is it possible to have a copy of this collection?
With fascination,
Dr. John Black Israel
(identifed here correctly for birth place and date)
My email is: johnbisrael@yahoo.co.uk

Early Canterbury Photography said...
This comment has been removed by the author.
December 27, 2014 at 9:42 PM