below: a carte de visite of the Montreal Street Bridge by A. Simpson 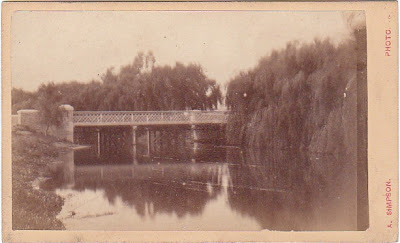 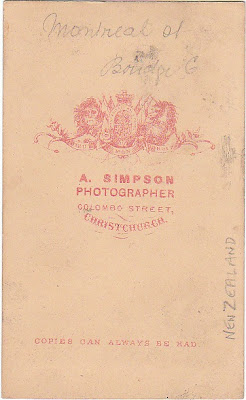 below: a circa 1869 carte de visite of the Gloucester St footbridge by A. Simpson


The surveyor reported that he had caused the willow trees on the north side
of the Gloucester street foot-bridge to be cut, so that the Council's lamp in
Oxford Terrace will show a light to both approaches of the bridge.
Star , Issue 503, 29 December 1869, Page 2 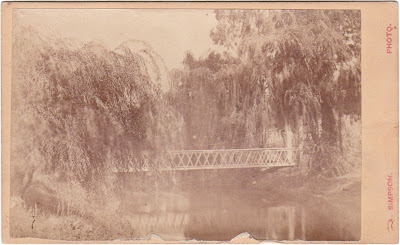 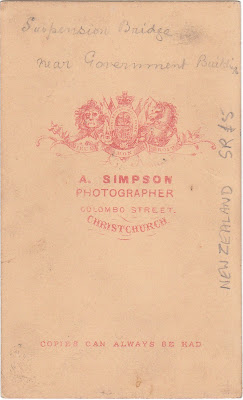 It is yet to be established who the photographer A. Simpson was. A possible candidate is Alfred Simpson a bookseller and publisher in High Street.

Alfred Yates Simpson was the son of Aaron Simpson and Eliza nee Yates. He was born in England about 1826, his first wife whom he married in London in 1852 was Emily Anna Hughes. Following her death (on 19 January 1881 or buried 2 February 1882?) he married Katie Elizabeth White. They married at St John's Church, Christchurch on 22 December 1884. A son from the first marriage was Alfred William Simpson, born in Carnarvonshire, Wales about 1857; he was later an architect in Christchurch (Empire Hotel). Another son was Edward (or Edwin) Yates Simpson born in Surrey about 1863, later a bookseller in Christchurch. (Church Record Transcripts - Christchurch Library)

In 1861 Alfred Simpson is living at North Street, Reigate with his wife Emily and three children twins aged four years and a daughter aged two years. Alfred Simpson was then aged 35 years employed as a clerk to a bookseller.

Illustrated Guide to Christchurch and Neighbourhood
Author: M. Mosley. Publication details: J. T. Smith & Co., 1885.
Literature being so closely allied to progress, it will not be out of place, in the present pages, to give a short sketch of its rise and progress in Christchurch, and we cannot do so in a more fitting manner than by giving a history of the bookselling and publishing business of Mr Alfred Simpson, High-street, Christchurch, an engraving of whose fine new premises we give. The business was established in 1862, in a small shop in Cashel-street, by Mr J. T. Hughes (Mr Simpson's brother-in-law), whose knowledge of books was acknowledged to be second to none in the colonies, and, as a natural consequence, he conducted his business so successfully that, in 1868, he found it necessary to move to more commodious premises, and fixed upon High-street as the scene of future operations; his shop being one of the places that all lovers of books made a point of visiting when in Christchurch, as they could always depend upon finding there the latest publications, either in book, pamphlet, or periodical form. The supply of periodicals was one of the principal items of the business, and has continued to grow so that at the present time something like 1000 parcels per month are despatched to all parts of the colony. Early in 1877 Mr Hughes retired from the business, and was ably succeeded by the present proprietor, Mr A. Simpson, who successfully carried on the business until the 19th of January, 1884, when a fire temporarily suspended his operations by totally destroying the most complete stock of books in the colonies. Daunted, but not dismayed, business was resumed two days after the fire in a temporary shop in the Triangle, pending the erection of new premises on the old site, which were only completed in September, 1884. In the meantime Mr Simpson set to work to get together a new stock, a task of no mean study, but hard work and capital have won the day, and visitors and residents can now get their wants supplied with everything of the latest and best in books, stationery, artists' materials, and fancy goods. One of Mr Simpson's mottos being "quick sales," is a guarantee that his prices are satisfactory to purchasers. The best books of every shade of opinion on all subjects are imported in sufficient quantities to meet the requirements of the market, cases arriving by every mail and direct steamer from London and Melbourne. Mr Simpson's London agent being a colonial bookseller of many years' standing, thoroughly acquainted with the requirements of the colonial trade, is a guarantee that this department is, not neglected. The "Bespeak" portion of the business has grown considerably during the last few years, more especially since the N. Z. Shipping Co's. line of direct steamers has placed us in such close proximity to the Old Country; as anything not in stock can now be obtained in a little over three months from date of ordering. In the successful catering for the enlightenment of his fellow colonists, Mr Simpson has not neglected the publishing portion of his business, having already published many useful works, of which, amongst others, may be mentioned the N. Z. University Calendars and Examination Papers; "Out in the Open, or Natural History in New Zealand," by T. H. Polts, Esq., and having now in the press, "The Principles and Practice of the Supreme Court of New Zealand," by Dr. Foster. Mr Simpson's terms for publishing are those known as publishing "on commission," which, gives justice and a fair proportion of profits to the literary producer and the literary introducer. Sufficient has been stated in the foregoing to show that the profession of literature is not neglected in Christchurch, and visitors will find a cordial welcome, without being expected to purchase, on visiting Mr Simpson's establishment. Victoria University, Wellington

The Cyclopedia of New Zealand [Canterbury Provincial District]
Simpson and Williams, Limited, Booksellers, Stationers, Publishers, and News Agents, 214 High Street, Christchurch. Established in 1862 by Mr. J. T. Hughes who was succeeded in 1878 by Mr. Alfred Simpson. Mr. J. S. Williams, who had been associated with the business from 1864, joined the firm in 1886 when the style was altered to Simpson and Williams. In the following year Mr. Simpson retired and his son, Mr. E. Y. Simpson, became a partner, the business being incorporated as a limited liability company in 1893, for family reasons. The firm is a direct importer of all lines and holds an immense up-to-date stock of the latest productions. It is agent in Canterbury for Messrs Gordon and Gotch, and for the Society for Promoting Christian Knowledge, and makes a special feature of importing English books and newspapers. As publishers, Messrs Simpson and Williams have successfully issued several works.