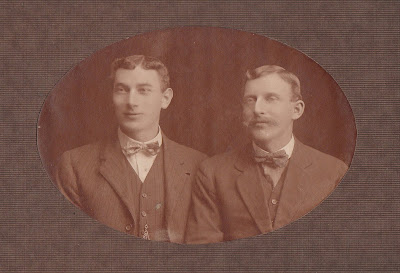 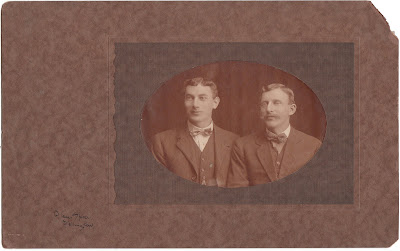 Fire in Bendigo.-The "Bendigo Advertiser" of the 7th inst. says:- "The continuous ringing of the firebell about a quarter past five o'clock on Friday morning attracted quite a large number of people to Williamstown-street, where it was found that the premises of Mr. Alan Spicer, photographer, were in flames. The fire started in the top floor of the building, which was two-storeyed, with walls of brick. When the roof, which was composed almost wholly of glass, gave way, the flames spread rapidly down the staircase, and the inflammable material and woodwork were speedily destroyed. The shop was gutted. When the firemen arrived they directed attention to preventing the spread of the fire to Messrs. Bush and Co.'s store on the one side and Miss A. Pa ton's fruit shop and Mr. F. W. Field's jewellery establishment on the other. An additional element of excitement was furnished by the fact that next to Bush's store the premises of the Craig, Williamson Proprietary Limited, seemed likely to afford scope for an immense conflagration. As it transpired, Miss Paton's stock and shop were both damaged by water, and Mr. Field's show window was splashed. In neither instance, however, did the flames reach the premises, the outbreak being confined to Mr. Spicer's premises. The latter's stock was insured for £300 in the Liverpool and London and Globe Company, while the building, which was owned by Mr. J. G. Edwards, was insured in the Manchester Company for £500. Miss Paton's stock was insured in the London and Lancashire Company for £130. No explanation is obtainable to account for the outbreak." Mr. Edwards, who is at present residing in Hobart, says the amount of insurance on the building does not nearly cover the loss.
The Mercury (Hobart), Wednesday 11 February 1903, page 7 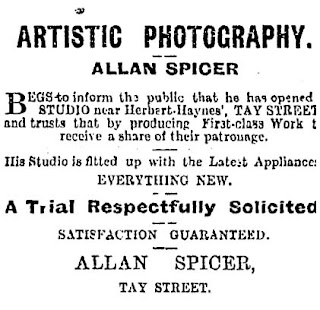 Southland Times, Issue 19327, 25 June 1904, Page 3 This notice continued in the Southland Times until 31 December 1904 with the spelling of Spicer's christian name corrected to "Alan".

Evening Post, Volume LXXX, Issue 131, 30 November 1910, Page 1
The death occurred yesterday, at his residence, 49 Ludlam street, Seatoun, of Mr. Alan Spicer, the well-known, local photographer. The late Mr Spicer, who was 60 years of age, was born at Torquay. He later went to Australia, where he married, but some twenty years ago he settled in New Zealand, entering business here as a photographer. He leaves a widow and family, consisting of one boy and two girls.
Evening Post, Volume CVI, Issue 19, 23 July 1923, Page
Posted by Early Canterbury Photography at 10:38 PM

Kia ora,
Great Blog - thank you SO much, I use it a lot.
A wee update re Alan Spicer: His first NZ photography gig was in Riverton. His first advert appears in the Western Star, 27 March 1903. He worked from Riverton for 14 months before relocating to Invercargill.
Cheers :-)

thanks Eve, I need to do some more research on this photographer and update the page. cheers Tony