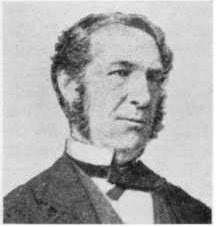 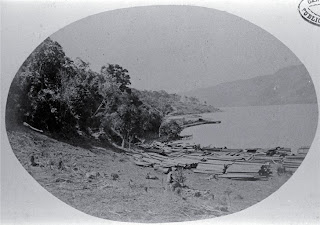 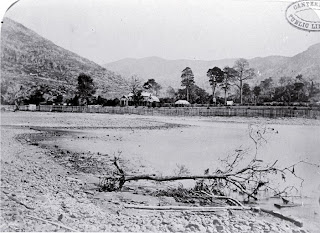 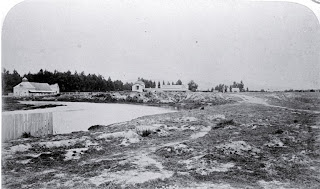 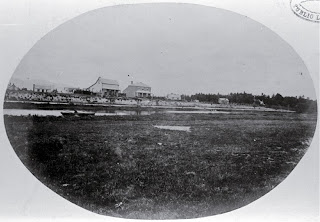 Houses along Avonside Drive and the Avon River, Christchurch [ca. 1865]
Englefield, a house built in 1864 on a 50-acre block then owned by William Guise Brittan (1809-1876), can be seen on the right.
Christchurch City Libraries, File Reference: CCL PhotoCD 1, IMG0028 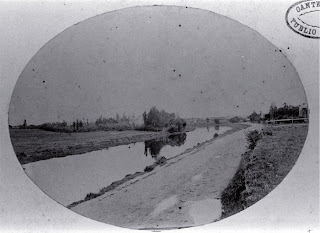 Telegraph Press Association Copyright
Wellington, April 26.
Mr W. T. L. Travers, the well known barrister in alighting from a moving train at the Lower Hutt station to-night fell between the platform and the cars. One leg was broken and he was cut about the head. The leg has been amputated below the knee. At a late hour the patient was in rather a critical state.

This Day.
Mr Travers died at 6 o'clock this morning, aged 84.
Mr Travers, who met with a fatal accident on the Hutt railway, was very badly injured. His nose was broken, a leg horribly crushed, and other parts injured. Amputation of the leg was necessary, and the operation took place between 12 and 1 o'clock, and he died a few hours later. The deceased, who was 84 years of age, and who still practiced at the bar, was in vigorous health, and the oldest and one of the best known lawyers in the Colony. He was one of the founders and a prominent member of the New Zealand Institute. There was a large gathering of the legal fraternity in Court this morning, when Mr Bell, President of the New Zealand Law Society. Mr Skerrett, President of the Wellington Branch, and the Chief Justice, paid high tributes to the personal character, high attainments, and public services of the deceased gentleman.

The late William Thomas Locke Travers, F.L.S., was a son of Captain Boyle Travers, of the Rifle Brigade, by his marriage with Miss Caroline Brockman, of Beachborough, in Kent, England, and was born at Castleview, County of Limerick, Ireland, on January 9th, 1819. He was a Lieutenant in the 2nd Lancers, B.A.L.S., from 1836 to 1838, and served in Spain during those years, part of the time as Aide-de-camp to General Espartero, afterwards Duke de Victoria.

Mr Travers was married at Cork, Ireland, to Miss Jane Oldham, and arrived in New Zealand on October 20th, 1849. He at various times represented the Waimea district in Nelson, and the cities of Christchurch and Wellington in the House of Representatives, and was Attorney-General in the first inchoate Ministry from the end of August to the beginning of September, 1854. Mr Travers, who was District Judge in Nelson from 1859 to 1860, was married a second time on April 9th, 1891, at Wellington, to Miss Theodosia Leslie Barclay. He was a Fellow of the Linnaeon Society and "Grand officer de l'Ordre Royal de Cambode." Mr Travers was highly respected by a large circle of friends in the Colony, and his sad death will excite feelings of deep sympathy among many of the old settlers, who will remember him as a splendid specimen of a pioneer settler, an able lawyer, and an honest politician. - Feilding Star, Volume XXIV, Issue 250, 27 April 1903, Page 2 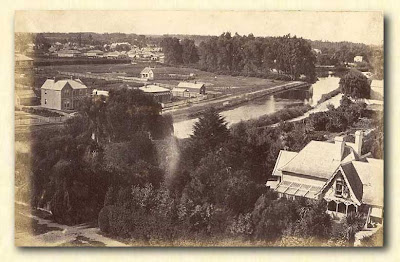 Canterbury Museum
The following contributions were received at the Canterbury Museum during the quarter ending Sept. 30, 1872:- Mr W. T. L. Travers, Wellington - 12 photographic views of the provinces of Nelson and Wellington, taken by himself. - Star , Issue 1445, 14 October 1872, Page 2

Hi, Congratulations on a wonderful blog. I am interested in the history of Richmond and would love to find out more about the photo from Wards Brewery showing Englefield in the foreground and southern Richmond beyond. Do you know anything about this photo - date?...or where I might get a high-res copy?