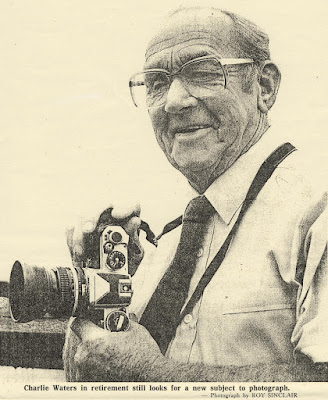 For 65 years the name Green and Hahn has been synonymous with professional photography. Thousands of Christchurch people in sports teams and wedding groups, or as debutantes, brides, and graduates have been captured on film by the company’s photographers.

But Green and Hahn has closed its doors. Changing economies and managements — and an upsurge in amateur photography have finally overcome a firm that was once the biggest in the business”. Charlie Waters owned the firm for about 25 years. He started working for Bert Green and Laurie Hahn in 1937 when he was 16. Famous faces were among his photography subjects. Royal tours and the opening of the Lewis Pass highway were covered by him, and apart from assignments as a news photographer for “The Press” double-page spreads of his photographs of All Blacks and high-country mustering appeared in the “Auckland Weekly News”.

“Before World War I Bert Green was a photographer with the ‘Canterbury Times’ and Laurie Hahn assisted Steffano Webb, a well-known professional photographer,” says Charlie Waters. “After the war they were working separately for various newspapers and magazines until they decided it (was) no use being in competition.” “They formed Green and Hahn Photography in 1925 and established a studio at 152 Armagh Street.” For many years that was a popular address for people looking at the proof sheets of innumerable functions and events covered by Green and Hahn photographers. In later years the studio was in Cashel Street. As a child Charlie Waters suffered from polio. That was evident in his distinctive limp as he walked around the city with his cameras and walking stick. Later, he lost an eye in a motor accident. But photography was no “soft option”. He had to carry heavy Graflex 4x5 inch-and-quarter plate cameras. On one occasion he gladly joined a mustering team in the Southern Alps.

“I never allowed my disabilities to worry me or get in the way of what I wanted to do.” He still has great admiration for the founders of Green and Hahn and especially Bert Green who, he says, was a really great photographer.Charlie Waters purchased Green and Hahn Photography during the 1950s. The firm grew until he had a staff of 24. “Without a doubt, we were the biggest photographic firm in the business. In addition to our newspaper and commercial work we had a thriving candid camera business using 35mm cameras. We were the photographers for the Winter Garden.” He was the first professional photographer to have his work used as evidence in the Christchurch Supreme Court.

“A motor accident in Brougham Street had resulted in a woman passenger losing her sight and the driver was being charged. Apparently the police claimed there were no contributory road conditions and they had their own photographs to back them up. “R. A. Young and Hunter and Co, who were representing the driver, thought otherwise. I was asked to take photographs to show the undulating surface, the high crown and deep camber of the road where the accident happened. ‘‘I was in the Supreme Court when the photographic evidence was passed to Mr Justice Northcroft. He seemed to be taking a long time comparing my photographs with those taken by the police. Soon he was asking me what film and developer I used and wanted to know about my camera and the exposures. “I am sure he almost completely forgot about the case. I later found out that Justice Northcroft was a keen amateur photographer. The driver, incidentally, was acquitted.”

Green and Hahn’s association with “The Press” started during the 1920s. It continued to the end of 1972 by which time Les Bloxham had become illustrations editor and had established the newspaper’s first photographic department — in time for the 1974 Commonwealth Games. As he was setting up the photographic department, Les Bloxham worked with the last Green and Hahn photographers Charlie Waters, Maurie Calvert and Murray Smith — who were involved with “The Press” contract. They were also the last newspaper photographers to use large format Speed Graphic and Rolleiflex cameras.

“In many respects ‘Time Press’ contract was a prestige job for Green and Hahn,” Charlie Waters says. ”We were always respected because we were photographers for ‘The Press’.”
Green and Hahn photographers once cycled to an assignment carrying their large format cameras and a bottle of flash powder. “Flash powder was a real hazard. We often put a bit of gunpowder in to make sure it would ignite. Once the flash fired you had to get to hell out of it before the sand started coming down — if you didn’t get out in time you were likely to be thrown out. “You had to be very careful when winding up the flint that the flash didn’t go off in your face. Many photographers spent some time in hospital after being burnt with flash powder.”

In 1940 Charlie Waters had an assignment to photograph Chief of Air Staff R.A. Cochrane, who was paying his last official visit to Wigram before returning to England. 'The Press' had permission from Sergeant Major Duncan, the station adjutant, to take the photograph. "As the Chief of Air Staff came down the steps from the officers’ headquarters I took a photograph. Seeing me, he pointed his finger at me and bellowed, ‘Did you take a photograph?’ just as I got another shot. “The sergeant was ordered to seize the camera. I refused to hand it over and was marched off to the jail. There, the camera was taken and all the plates removed. I was then escorted, with my bicycle, out to Riccarton Road by two armed guards. “In the meantime, George Creeth, the illustrations editor at ‘The Press’, was wondering what had happened because I had promised to have the photographs to him by 2pm. He was not pleased when I told him I did not have any photographs. “Later I received a letter of apology for the shabby treatment from the Hon. Frank Jones, the Minister of Defence.”

Photographing sports teams was a Green and Hahn speciality. Until recently, taking the studio photograph of All Blacks was an important annual assignment. In 1959 Charlie Waters sat Kevin Briscoe (the hardcase of the All Blacks) on the ground in front of the team: “I don’t know it Kevin objected to being put in the front, but just as I was about to take the photograph he got up, picked me up like a child, and put me where he had been. “He then went over to the camera and looked as if he was going to take the photograph. Unfortunately, he did not take a photograph, but I wish to God he had.”

Green and Hahn photographed hundreds of Christchurch weddings. But weddings, like newspaper photography and the All blacks, could also be eventful. “I was actually physically removed from a wedding 60 years ago,” Charlie Waters recalls. “I will never forget the bridegroom’s name because he died three weeks later. I believe he strained himself when he picked me up.”

Most portraits were taken in the studio. But Charlie Waters remembers one occasion when he was asked to photograph a woman’s husband in her Stanmore Road home. “I suggested that it might be better to photograph her husband in our studio, but she said she would prefer that the photograph was taken at home. “I arrived at the appointed time and the woman solemnly led me to one of the rooms. ‘He’s in here,’ she said. To my horror I saw her husband in a coffin. No wonder she did not want to bring him to the studio.”

Although Charlie Waters owned Green and Hahn, he did not manage the firm. That was left to his brother, Malcolm Waters. “We were known as ‘Inky’ and ‘Hypo’. Malcolm worked in the office and I was the photographer. We never became involved in one another’s work. I didn’t go into Malcolm’s office and he never went into my darkroom.” In 1974 Charlie Waters sold Green and Hahn and moved out to a small farm near Amberley where he could have a few sheep and horses. But until the firm went into liquidation late last year he always kept a personal interest in Green and Hahn and occasionally helped with an assignment. “It was an awful tragedy to see Green and Hahn go out of business. Green and Hahn represented colourful days when things were done differently. The firm was always highly regarded by its staff and the public. “We had a vast variety of work. For newspapers it was the incident and the action whereas portraiture was artistic. Commercial photography was different again. “It was once every photographer’s ambition to get a front cover and double-page spread in the ‘Auckland Weekly News’. “But we could not have produced the excellent photographs we see in ‘The Press’ today with the old Graflex cameras and slow films we used. I recall having to leave the 1937 Springbok test at Lancaster Park at half-time because there was insufficient light.”
Posted by Early Canterbury Photography at 5:52 PM