New American Portrait Gallery
(note: the connection between R. Smith of Lichfield Street and Mr. Smith of Ferry Road has not been established however it is possible they are the same person.)

Mary Elizabeth Staples formerly Smith, nee Fullerton, Samuel Albert Staples' first wife was previously married to William Randoll Smith (died 1880) the owner of the Queen's Hotel in Christchurch. She appears to be an aunt of Staples' second wife Sarah Jessie Fullerton. She died 9 August 1911 at her residence "Ellerslie" Antiqua Street, Christchurch and gave £500 for a memorial window to be erected in St Michael's Church for herself and her late husband William Randoll Smith. 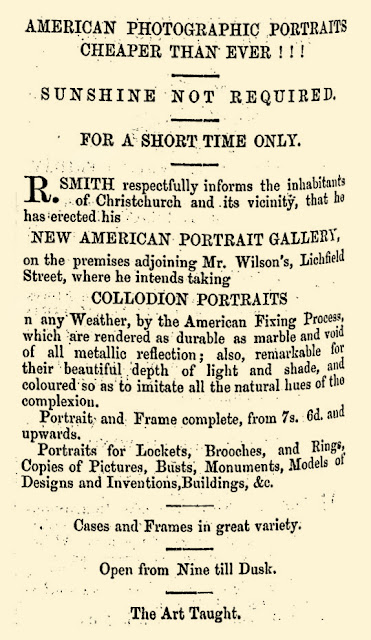 
We have recently had our attention called to a series of photographic prints, manipulated by Mr. Smith of Ferry Road, Christchurch; they comprise views of Lyttelton and Christchurch, stereoscopic views of local scenes, portraits, &c, and we have no hesitation in saying that they are highly creditable to the artist, and will well repay the trouble of inspection. One picture — a view of Mr. Gould's residence — is quite a gem in its way, presenting a crispness of outline and a chiaro-oscuro which we have never seen excelled in any photograph.

A case of photographic goods consigned to "Smith arrived" on 5 November 1862 on the "Gothenburg" from Melbourne.


Yesterday morning another very old colonist passed away in the person of Mr Richard Smith, who was widely known in business circles in Christchurch. Mr Smith arrived in the colony in 1859, and commenced business in Christchurch as a painter, plumber, etc. He was also an expert in photography, which art he practised in Christchurch in the early days. A few years ago Mr Smith sold out his business in High street, and since then he had lived a retired life at his residence in Stanmore road. He was one of the first members of the Canterbury Acclimatisation Society, and also a member of the first Christchurch Fire Brigade.


Mr Richard Smith. Yesterday morning Mr Richard Smith, an old colonist and resident of Christchurch, died at his residence. Mr Smith arrived in the ship Cameo in 1859, and commenced business as a painter and plumber. He retired a few years ago. Mr Smith was a well-known Freemason, and was a member of the first Canterbury Acclimatisation Society and of the Christchurch Fire Brigade. 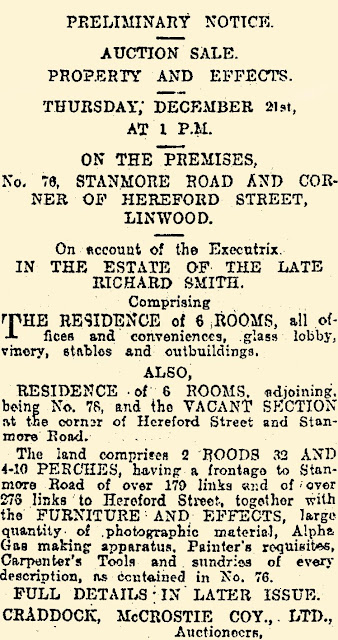 Posted by Early Canterbury Photography at 12:20 AM