This notice (above) by F. Noble Campbell & Co, Oxford Street, Lyttelton advertising a folding camera first appeared in the Lyttelton Times "New Advertisements" section on 7 March 1857, page 9. Included with the camera were the other requirements for a new photographer together with two sets of instructions. The notice continued in the Lyttelton Times until 13 May 1857. About six weeks after the notice first appeared Benjamin Woolfield Mountfort advertised that he was prepared to take photographic portraits by the new collodion process at his booksellers and stationers store in Colombo Street, Christchurch. Mountfort therefore appears to be Canterbury's first resident professional photographer. Mountfort's store was located on the west side of Colombo Street between Armagh Street and Gloucester Street (1), near Gould & Miles having moved there from the corner of Cashel and Manchester Streets in October 1856. He continued to advertise as a photographer for almost two years until about 5 March 1859. 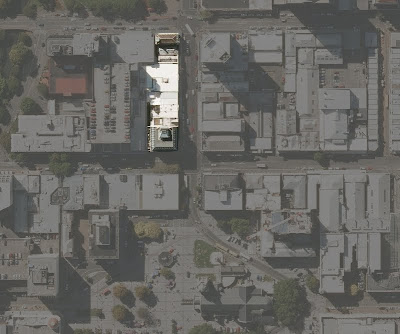 Mountfort's store was located on the west side of Colombo Street between Armagh Street and Gloucester Street.


A week after Mountfort commenced business as a photographer the daguerreotypist John Nicol Crombie, who had arrived in Christchurch from Auckland via Nelson, opened a studio in Cashel Street, Christchurch. Crombie later moved to Canterbury Street, Lyttelton, this studio closed on 7 November 1857 and he departed a few days later for Wellington on the steamer "Wonga Wonga".

Early the following month the bookseller and stationer James Francis McCardell announced he was prepared to take portraits and that specimens could be seen at his store in Oxford Street, Lyttelton.

With this progress in photography in Canterbury the Lyttelton Times was able to declare that "Photography has broken out like an epidemic among us. Quite unknown in the place a year ago, we have now a professional artist, well known in the northern provinces, and another on the point of coming; two students practising the art, and we believe, one amateur. Canterbury will now be able to look itself straight in the face."

The "professional artist, well known in the northern provinces" fits the description of John Nicol Crombie who arrived in Canterbury in April 1857 after stays in Auckland and Nelson. The other photographer "on the point of coming" is likely to be W. G. Hewlings.
The "two students" may refer to Benjamin Woolfield Mountfort and James Francis McCardell. In 1857 both these booksellers and stationers advertised they were prepared to take portraits by the new collodion process. Dr. Alfred Charles Barker is likely to be the photographer described as an "amateur".

Other developments in 1857
We believe that several photographic views were taken on Monday last as the Sumner Road processions (the opening of the road over the Port Hills between Lyttelton and Sumner) were in progress. It is to be hoped that these views will be successful in perpetuating pictorially this important event in our history.
Lyttelton Times, Volume VIII, Issue 503, 29 August 1857, Page 5

We have not noticed the great spread of photography in our province of late. Two, whom we may call native artists, are practising with great success in Christchurch (1) and Lyttelton (2); and Mr. Crombie, a visitor, is equally patronised by the public. This gentleman's gallery of New Zealand portraits is well worthy a visit from those who have an interest in the worthies at present living and moving in our colony. Mr. Crombie has announced his early departure from our province.
Lyttelton Times, Volume VIII, Issue 507, 12 September 1857, Page 5