E. Walker advertised in The Star between 2 August 1869 and 31 August 1869. In April the following year a reward was offered for the return of a lost pocket book with E. Walker, Photographer, High Street as the return address. 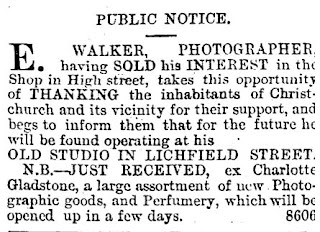 Directory entries indicate E. Walker was first in business in Lichfield Street about 1865. He may then have gone to London and returned to Christchurch in 1869 setting up business in High Street, the studio appears to have closed in 1870 or 1871.